Unusually for a modern TV, the bodywork of Sony’s 40in KDL-40WE5 is white. But actually, it should probably have been green. For Sony reckons that the 40WE5 is not only its most eco-friendly TV yet, but also one of the ‘greenest’ TVs ever built by anyone. And for once, these claims seem to have some grounding in fact!


To put some numbers on Sony’s claims, the brand’s own 40in KDL-40W4500 consumes around 205W of power, while the 40WE5 consumes only 88W. I suspect the difference wouldn’t be quite so marked if you compared the 40WE5 with Sony’s newer 40W5500 – but even so, there’s no doubt whatsoever that the 88W claim is pretty remarkable for such a large TV. In fact, it means the 40WE5 can consume far less power than nearly all 32in TVs, and even a few 26in models. 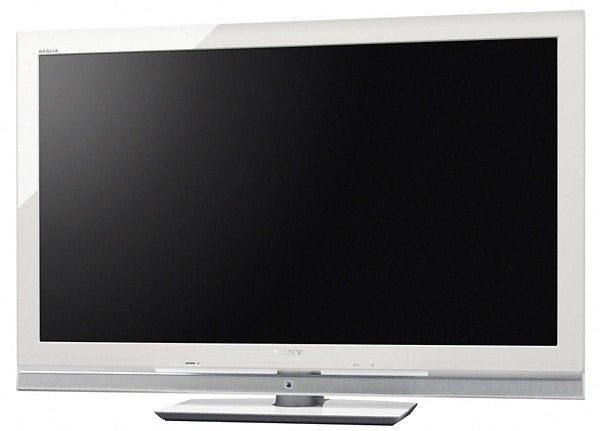 So how has Sony managed to keep power consumption so low? Well, the two most important innovations have to be the introduction of a new backlight system, and a groundbreaking ‘Presence Sensor’.


The Presence Sensor is, perhaps, a bit more gimmicky – but no less interesting. It comprises a little sensor on the TV’s fascia that can detect both movement and body heat, so that if you walk out of the room without remembering to turn your 40WE5 off, the TV will realise you’re no longer there and turn the picture off automatically after a designated time. The sound will continue to play, so that you can still hear your programme from another room, but the picture won’t come on again until the Presence Sensor detects you re-entering the room. 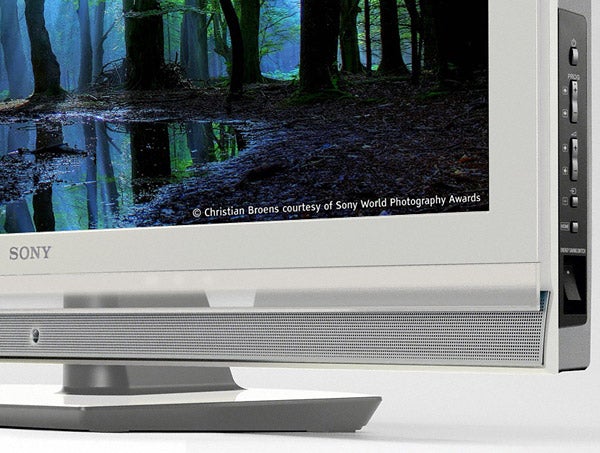 I found the Presence Sensor surprisingly effective during my tests. It certainly proved very adept at recognising when nobody was in the room, turning off its pictures accordingly. It wasn’t quite so good, for some reason, at spotting when I came back into the room, only activating pictures again right away for around 90 per cent of the time. But heck, even if the picture doesn’t miraculously pop on again as soon as you re-enter the room, it only takes a quick press of the remote to get things up and running again.


The 40WE5’s other ‘green’ features are less innovative/practical, but we should cover them nonetheless. And so we find a general Eco image preset, which optimises various aspects of the 40WE5’s pictures to get the maximum energy ‘value’ from the TV. More specific Eco features include a light sensor mode that adjusts the picture settings in response to the light levels of your viewing room (a feature common to most LCD TVs these days); an ‘Idle’ mode where the TV can turn itself off if you don’t do anything to it after a preset time; and a PC Power Management mode that switches the TV to standby if no signal is received from a computer for 30 seconds.


On top of all this, the 40WE5 uses an onscreen instructions manual to save on the paper required for a printed one, and is the first Bravia TV to feature a full manual ‘off’ switch, which leaves the TV using virtually no power at all.

Happily, the 40WE5 isn’t content to trade solely on its green credentials. Its connections, for instance, include a healthy four HDMIs, a USB port that can play photo, music or video files into the TV, and an Ethernet port via which you can either access multimedia files stored on a DLNA-certified device, or else access Sony’s new AppliCast online service. AppliCast currently includes such features as RSS newsfeeds, interactive news, online photo stores, a World clock and an onscreen calculator.


As noted in previous reviews of Sony’s ‘online’ TVs, the AppliCast service currently offered is slick but really limited content-wise compared with some rival systems. But there’s always the potential, of course, for the service to grow in the future.

While all the 40WE5’s tree-hugging goodness sounds great on paper, I have to say that it’s got me concerned about the 40WE5’s picture quality. But the 40WE5 really does its level best to assuage these concerns with an extended feature list that doesn’t show any obvious signs of picture quality compromise.


For instance, the set includes Sony’s 100Hz MotionFlow system, which doubles the standard PAL refresh rate, and interpolates new frames of image data to make motion look both crisper and more fluid. The 40WE5 also boasts Sony’s impressive Bravia Engine 3 video processing system, which we’ve recently seen do a terrific job of reducing noise in images – especially upscaled standard definition ones – while also boosting detail levels, colour response and all sorts of other subtle things besides.


In fact, the 40WE5’s picture related features look identical to those of the recently reviewed Sony KDL-46W5500, right down to the extremely high claimed contrast ratio of 100,000:1. But surely the 40WE5’s Eco drive means it can’t actually achieve the same high video standards as the W5500, right? 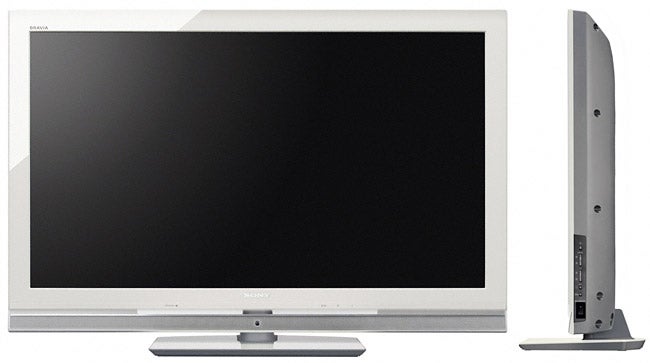 What I mean by this is that if you employ ALL of the 40WE5’s eco measures, pictures can become a little dull and/or slightly unstable. Because of this, I generally left both the Light Sensor and Power Saving Eco features switched off. However, crucially the new HCFL backlight system doesn’t seem to cause pictures any problems at all, meaning that the single biggest Eco feature of the 40WE5 delivers its energy efficiencies without performance compromises. Excellent.


In fact, provided you avoid the Light Sensor and Power Saving options, the 40WE5’s pictures look identical to the excellent ones witnessed on the 46W5500. Except that in one respect, they’re actually slightly better. For the residual signs of backlight inconsistency noted under extremely dark conditions with the 46W5500 are to all intents and purposes gone completely on the 40WE5 – at least if you’re using any remotely sensible image settings. Presumably, this is a result of all the in-house work Sony has put into developing the 40WE5’s new eco backlight.

For a full exploration of the other aspects of the 40WE5’s pictures, I might as well refer you to the relevant part of last week’s 46W5500 review, as they’re so similar. But if you can’t be bothered to head on over to that review, the 40WE5 combines outstanding HD sharpness with rich, natural colours; some of the best black levels yet seen on a non-LED LCD TV; clean and sharp motion handling; and fine suppression of noise that leaves its standard definition pictures looking markedly better than many of its similar-sized peers. 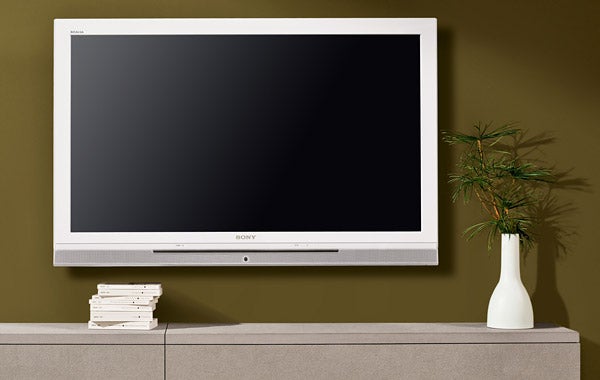 When all’s said and done, the only seriously negative thing to say about the 40WE5’s picture is that it loses rather a lot of colour and contrast if watched from much of an angle. But the same is true, of course, of countless other LCD TVs.


I guess I’m duty bound to point out, too, that while exceptional by non-LED standards, the 40WE5’s black levels aren’t quite as profound and stable as those of the best LED and plasma TVs. But it’s a surprisingly close-run thing, and high-end plasmas and especially LED TVs will both set you back a chunk more money than the 40WE5. 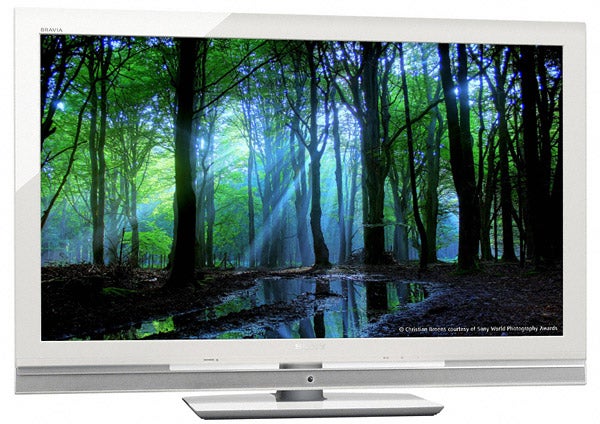 None of Sony’s Eco features seem to extend to cover the 40WE5’s audio, so it comes as no surprise at all to find the 40WE5 producing a similarly punchy, respectably dynamic if ultimately slightly bass-light audio performance to that heard from the 46W5500 TV.


I have to admit that when I first heard about the WE5 range, I kind of wrote it off as a gimmick. Cue egg on face, for Sony has not only managed to retain its current high picture quality standards on the 40WE5 while delivering genuine running efficiencies; it’s actually improved them slightly.


I guess the 40WE5’s Eco-friendliness and performance talents don’t come cheap; the 40WE5 costs the best part of £200 more than the 40W5500 at most retailers we’ve checked.


But don’t forget that as well as allowing you to feel good about yourself for saving the planet, the 40WE5 will also genuinely save you money over time with its energy-saving antics. So much so, that if you keep the TV long enough, it should actually work out cheaper in the long run than a 40W5500.