Sony has developed a habit in recent years of launching interim TVs; sort of ‘v1.5’ models tucked in between the main courses of its headline annual TV range launches.


The 40in KDL-40NX713 is one of these v1.5 TVs, turning up to inject some new life into Sony’s current LCD range while we tick off the months before the launch of the brand’s true next generation models.


With this in mind, we didn’t really expect many surprises from the 46NX713. But maybe because of our relatively low expectations, the set has actually ended up impressing us – and it’s even introduced a surprise or two along the way.


The 40NX713’s design gets things off to a great start. For it’s immediately apparent that the 40NX713 is twice as slim (at just 32mm) round the back as the original 40NX703. Couple this new-found slimness with a single-layer, glass-fronted black-edged fascia, and you’ve got a seriously stylish TV that delivers much more satisfyingly on the ‘Monolithic’ name Sony has attached to its latest TV fashion. You can also slot the set into Sony’s optional, ultra-stylish SU-B400S silver bar, within which you can tilt the TV back up to six degrees if you wish. 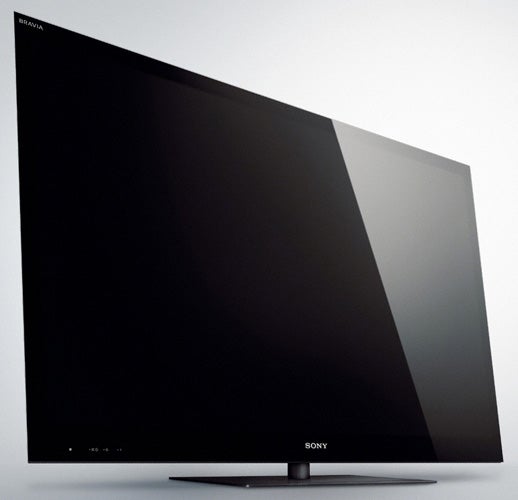 We haven’t tested one of these stands yet, though, and we’ve heard unconfirmed reports that the bar-style stands can muffle the sound produced by the speakers in the TV’s bottom edge. If anyone has experienced this – or, indeed, has had the opposite experience – please add your thoughts to the comments section.


With the 40NX713 set up on its standard, chunkier but still not unattractive ‘standard’ desktop mount, it also strikes us that the 40NX713’s bezel is much narrower than that of the 46NX703. Part of us actually liked the almost scary, indomitable presence of the larger Monolithic models, but with our sensible head on, the new, trimmer fascia is both sleeker and more practical, given the limited space of your typical UK living room.


Obviously, given the 40NX713’s slimness, wall-hanging is an attractive option. With this in mind, it’s nice to find that Sony has arranged the set’s connections so that you can access them from the TV’s sides, rather than from the rear.


The already very positive feelings raised by the 40NX713’s improved design increase as we tally up its connections. Its four HDMIs should keep pace with the demands of all but the most excessively ambitious home cinema fans, while multimedia duties are catered for by a USB port, a D-Sub PC port and a LAN socket.


The USB can play back video, photo or music files, as can the LAN socket from DLNA-enabled devices. Even better, the set carries built-in Wi-Fi, rather than forcing you to cough up for an optional external USB dongle. Actually, given the presence of just one USB port, it’s probably just as well that the Wi-Fi is built in.


We’ll come back to BIV in a moment, but first there’s one more rather important connection to note: a 3D Sync terminal. This is there because the 40NX713 offers active shutter 3D playback as an optional upgrade.

To make the TV 3D capable, you’ll need a £50 TMR-BR100 3D transmitter, together with as many pairs of TDG-BR100B active shutter glasses as you need/can afford at around £100 a pop.


To some extent, we don’t have a problem with making 3D an optional extra if it helps Sony get sets like the 40NX713 out at a decent price. But of course, even if there are only two of you in your household you’ll have to add £250 to the 40NX713’s thankfully quite aggressive basic cost. Plus you’ll have to accommodate an external 3D transmitter somewhere near the TV.


Going back to BIV, regular readers will know that we’re pretty enamoured of its concentration on providing a bounty of video streaming services – the sort of online content that we suspect people most want to receive on a ‘connected’ TV.


December 23rd, moreover, marked the launch of yet another substantial new BIV feature: Qriocity Music Unlimited. This is essentially a subscription-based package for both bringing your music together across multiple devices (PC, TV, portable music player, etc), and allowing you to access music stored on premium ‘channels’. 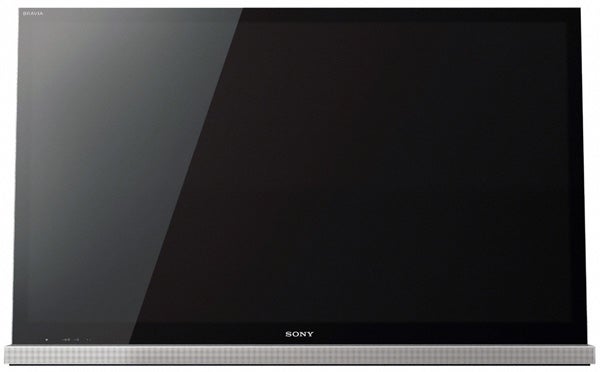 Two levels of subscription are available, and given the fairly substantial nature of the new service, we’ll be doing a dedicated review of it in the next week or so. Suffice it to say that it’s a surprisingly ambitious and well-presented service, but one that feels just a touch expensive at the moment with its £9.99 top-tier sub.


It’s nice to see, too, that the 40NX713 allows you to fine tune the MotionFlow system, with three different presets: Standard for ‘normal’ viewing; Clear for use with high-speed content with maintained brightness; and ClearPlus, for fast-speed content with reduced brightness (to limit the obviousness of any unwanted side effects associated with the MotionFlow engine).


The only significant deficiency of the 40NX713’s spec sheet is that it doesn’t go as far as we’d like with its picture fine-tuning tools. Sure, there are gamma and white balance adjustments, a clear white mode, a contrast enhancer, a black corrector and Sony’s Live Colour processing. But there isn’t a full colour management system to rival those found on most recent sets from Panasonic, LG, and Toshiba, to name but three.


Since the 40NX713 is a 2D set only in its out-of-the-box state, let’s start by assessing its 2D performance. Which is actually excellent.


Our single favourite thing about it is its black level response. For unlike so many recent edge LED TVs, the 40NX713 doesn’t suffer significantly with inconsistent backlight issues. Even during the very darkest scenes the picture looks evenly illuminated – provided, at least, that you’ve subdued the set’s backlight, brightness and contrast settings. You can see some minor inconsistencies if you’ve got the image blaring out using one of the set’s over-aggressive presets, but under sensible calibrated conditions, the 40NX713’s black level response is one of the best we’ve seen from an edge LED to date.

Achieving the best settings for black level response on the 40NX713 does cause a little greyscale subtlety and shadow detail to slip into the blackness, but not so badly to really cause alarm. Rather more aggravating is the speed with which the image loses contrast once you move beyond a viewing angle of 30 degrees – though of course, the 40NX713 is hardly alone in this respect.


Some people might find the 40NX713’s picture a touch muted post calibration. But actually, once we’d grown accustomed to it, this struck us rather as a strength than a weakness. For while many edge LED screens mistake gaudiness for attractiveness, the 40NX713 seems built with a rather more cinematic sensibility. We’ve already seen how the relatively ‘reined in’ picture helps produce good black levels, but it also helps colours enjoy a naturalism of tone and subtle richness that makes long-term viewing soothing and immersive. 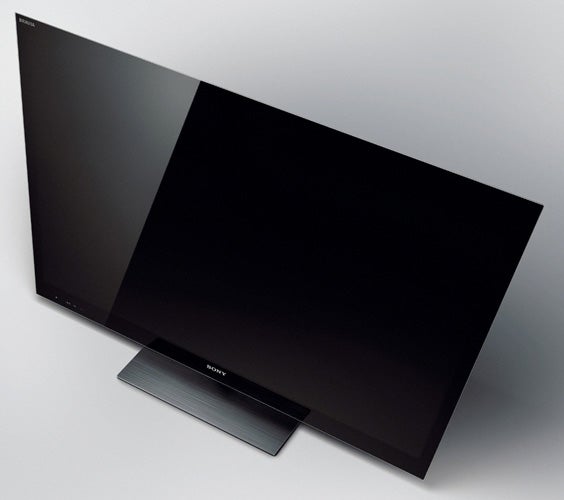 Another benefit of the 40NX713’s relatively gentle approach can be seen with standard definition pictures. They are upscaled cleanly, without forcing detail too much, and without losing colour tone credibility. The clean look to standard definition also makes us suddenly realise that the screen has a very respectable native response time. What residual blur and judder remains can generally be removed with the MotionFlow processing, though this can generate minor unwanted side effects, so only use it with caution.


Turning next to the 40NX713’s optional 3D capabilities, they’re good rather than great. On the plus side, full HD 3D images from Blu-ray look superbly detailed and crisp, as well as benefiting from an excellent contrast by LCD standards. Colours look quite natural too, and retain this naturalism even during dark scenes – something even Panasonic’s otherwise excellent 3D plasmas can struggle with.


However, the 40NX713’s 3D images are also prone to our old nemesis, crosstalk. There is definite evidence of double ghosting around some elements of most 3D scenes, which can become seriously distracting once you start to notice it.


The 40NX713 certainly isn’t the worst offender in this regard, but nor is it the best. Another lesser issue concerns the quite substantial hit the 3D image’s brightness takes when you don Sony’s active shutter glasses – a slightly negative result of the otherwise likeable sedate quality of the set’s general picture tone.


Overall, the 40NX713’s pictures class as excellent with 2D provided you’re after a fairly cinematic picture rather than a particularly in-your-face one. With 3D it rates as fair to good.


The sound accompanying these generally pleasing pictures is pretty good too. Certainly there’s more depth, openness and clarity to the soundstage than we commonly find with sub-50mm TVs, even if bass levels are hardly going to shake your foundations.


Considered first and foremost as a 2D TV – which is, after all, how it sells in its ‘native’ state – the 40NX713 is a really fine option for a relatively discerning viewer. The price of under £700 we’ve found online makes it great value too.


Crosstalk issues make it a more compromised 3D performer if you decide you want to upgrade it. It’s still not a bad effort, but if 3D is really important to you, you might be better waiting for Sony’s true next-generation 3D panels to start coming through in a couple of months.