Sony’s first 3D TV is finally here, in the 40in shape of the KDL-40HX803. And to be honest, we’re not expecting very much. For whenever we’ve seen Sony 3D TVs in action at big shows, they just haven’t looked as good as those of some rivals. So let’s hope the Japanese brand has managed to cram in plenty of last minute improvements!


Rather surprisingly, the 40HX803 doesn’t wear Sony’s new and rather stylish Monolith design. Instead you get a straightforward but sleek black bezel for the top, right and left sides, with a slightly proud metallic strip along the bottom edge. The set still looks nice, though, for all its non-Monolithic approach.


It doesn’t do the 40HX803‘s aesthetic impact any harm, either, that it employs edge LED lighting to deliver a reasonably slender profile. Though it’s nothing like as slim as Samsung’s edge LED icons. What’s more, its edge LED system is a dynamic one, meaning that sections of the edge lighting can be independently controlled for a hopefully more impressive contrast performance than you usually get with a standard edge LED-lit LCD TV. 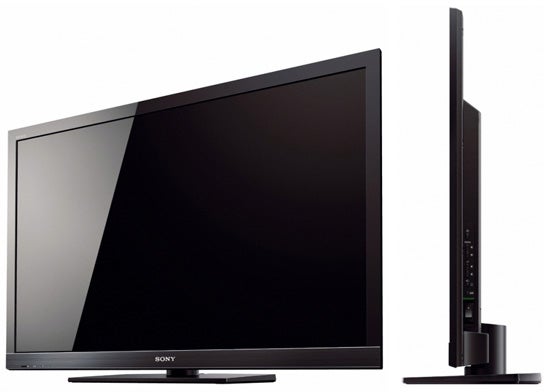 Slightly surprisingly for such a slim screen, Sony has left most of its connections facing straight out of the TV’s rear, rather than using the side access approach that would suit wall hanging. But at least the number and variety of these connections is pretty prodigious.


For instance, it has four HDMIs, all built to the v1.4 specification, so that they’re compatible with 3D sources. Also of note are a USB input, an Ethernet port, and a 3D Sync terminal, which we’ll look at in turn.


The USB can play music, video and photo files directly into the TV, but also allows you to add Wi-Fi to the 40HX803 via an optional USB dongle. It’s a touch disappointing that the 40HX803 doesn’t carry built-in Wi-Fi for its money, but it’s hardly alone in preferring the optional upgrade route.


The Ethernet socket, meanwhile, has three uses. First, it supports the set’s built-in Freeview HD tuner, to deliver potential future interactive services like the BBC iPlayer. Second, it provides a wired means of importing files stored on a DLNA PC. Finally, it allows you to take the TV online to experience Sony’s Bravia Internet Video platform, which we’ll return to in a minute.


But first we’ve got to discuss the 3D Sync terminal. This is there because the 40HX803 doesn’t have a built-in 3D transmitter, unlike the Samsung and Panasonic 3D TVs we’ve tested. In fact, the 40HX803 doesn’t have 3D facilities at all in its standard form. You have to add an optional extra transmitter and optional pairs of active shutter glasses, with the transmitter costing £50 and the glasses setting you back £99 per pair. This effectively makes the 40HX803 £1,887 if you want 3D with two pairs of glasses.


We do understand Sony’s idea with this, to be fair. For it helps keep the 40HX803’s up-front price down, allowing people to add 3D later as their finances allow. But there’s no getting round the fact that once you’ve 3Ded it up, the 40HX803 hits a similar price level to Samsung’s 40C8000 integrated 3D TV. In other words, 3D continues to be very much a premium technology.

Going back to the 40HX803’s Bravia Internet Video features, regular readers will know by now that it is arguably the most sophisticated and content-heavy TV online platform around, offering both a slick interface and oodles of streaming video content, bolstered by a seven-second built-in buffer.


Among the most interesting content providers are YouTube, DailyMotion, Demand Five (the Channel Five catch up service), FIFA, Eurosport, and LoveFilm, complete with the facility to sync your online account to the TV for downloading full feature films.


Other key features of the 40HX803 we’ve not covered yet include a system for converting 2D sources to 3D, and MotionFlow 200Hz processing, for enhanced motion playback. 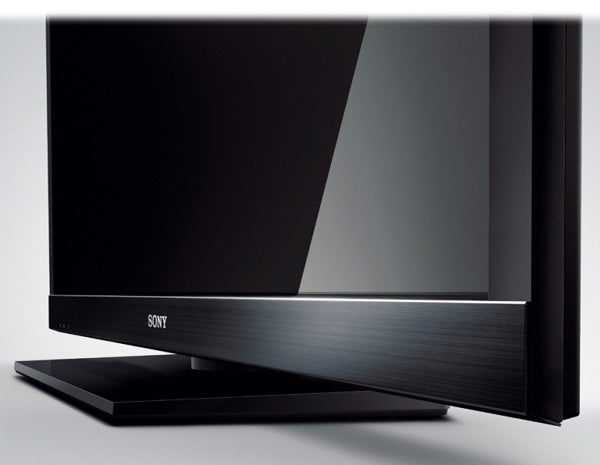 
To illustrate this contrast difference, Sony describes the 40HX803 as a GigaContrast TV – though it doesn’t give us any sort of contrast ratio figure.


And so to the moment of truth: do the 40HX803’s 3D pictures live down to the expectations raised by early Sony demos? Actually, no. But nor are they the best around.


On the upside, HD 3D pictures look much crisper than they did on Sony’s early 3D pre-production samples – largely because the set’s motion processing tools seem much more advanced, allowing objects to move around in the three-dimensional world without losing excessive resolution, or smearing. 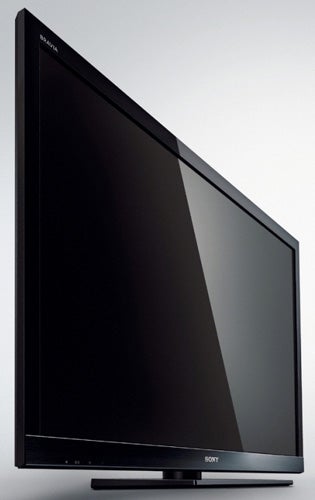 Colours also look more dynamic with the 3D glasses on than we’d expected based on past experience – though they’re as dynamic as those of Samsung’s C8000 3D series, losing considerable amounts of brightness once you’ve got your glasses on.


Sony’s 3D glasses are reasonable in terms of their comfort during long-term wearing, and how they restrict the amount of ambient light that gets in between your eyes and the lenses.


Unfortunately, however, the 40HX803 suffers from what’s looking like being a serious problem for 3D LCD TVs: crosstalk noise. There’s clear evidence of the same edge ghosting around some objects when viewing 3D that we noted on Samsung C8000 sets, making affected parts of the picture look slightly out of focus, and causing your eyes to become strained as they keep trying to reconcile the offset images.


On the plus side, Sony’s 3D images seem to suffer less with crosstalk than the Samsung 3D TVs we’ve seen. But they don’t get close to the near crosstalk-free pictures delivered by Panasonic’s P50VT20B 3D TV.


The 40HX803 is a very good 2D TV indeed, though. Particularly impressive is its black level response, which delivers markedly deeper black colours than Samsung’s C8000 range. In fact, they’re the best black colours we’ve ever seen from an edge LED set – a situation made even better by the fact that Sony has almost completely eradicated the sort of backlight inconsistencies that have consistently plagued edge LED models. Provided, at least, that you select sensible contrast and backlight level settings.

The impressive natural black level response of the screen also means that Sony’s local dimming system is the most effective we’ve seen on an edge LED screen. Though we personally still chose to deactivate it, for we could still see faint ‘blocks’ of light inconsistency when bright objects appear against mostly black background.


Given how black the 40HX803 can go, we were also impressed by how light and clean bright image elements look even when they’re appearing amid general blackness. 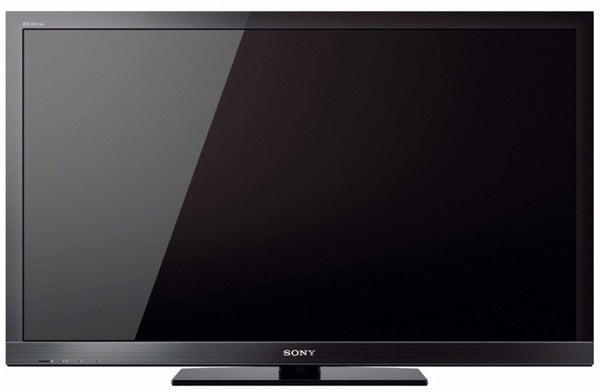 We do have a few concerns with the 40HX803’s images, though, beyond the 3D crosstalk. First, the screen is fairly limited with respect to its effective viewing angle. Also, its screen proved a little more reflective of light in our room than we’d ideally have liked, and finally the 2D to 3D conversion circuit is only passably effective. It doesn’t create as great a sense of depth as the Samsung system, to the point where we didn’t really bother with it. Though on the upside, at least the Sony’s ultra-safe approach results in less depth inaccuracies.


These picture concerns aren’t our only issues, either. We also found the TV’s remote slightly fiddly, with some over-complicated button layout. The onscreen menus are rather sluggish and long-winded at times too, and the set handles its 3D options very awkwardly, splitting them across two totally different menu suites.


Finally, the 40HX803’s audio is nothing to write home about. It passes muster with ordinary TV fare, but as usual with edge LED TVs, when pushed hard with an action film there’s practically no bass; for instance, the native drum beat that underscores the snake fighting scene near the start of ”Casino Royale” is left almost inaudible. The set also sounds slightly squashed in its mid-range, and treble details can sound peaky thanks to the lack of any balance at the lower end of the spectrum. At least the set can go passably loud without the speakers actually distorting, so that’s something.


Looked at as a 2D TV – which is actually what it is in its ‘out of the box’ state – the 40HX803 is pretty excellent, producing arguably the best pictures we’ve seen from an edge LED TV to date. So if you’re not interested in 3D, feel free to buy a 40HX803 and be extremely happy with your choice.


If you are interested in 3D, though, the 40HX803 becomes a more considered purchase. For while its 3D pictures are far from the disaster area we’d been worried they might be, its problems with crosstalk noise still represent a substantial concern. 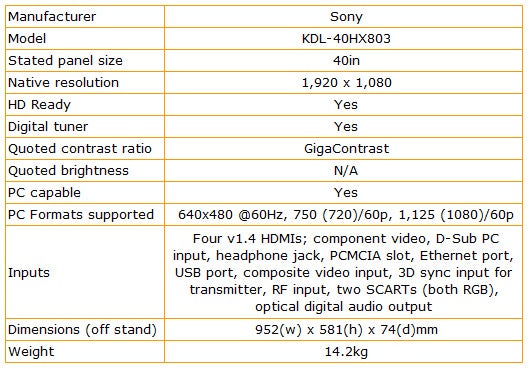