Billed as an ‘affordable’ Blu-ray system, the BDV-EF200 provides everything you need for hi-def home cinema without taking a massive toll on your bank balance. Well, almost everything – being a 2.1 channel system there are no surround or centre speakers involved, but if you’re not keen on clutter or wires trailing across the room then it could be the ideal solution.

What you do get, however, are many of the features found on Sony’s impressive standalone Blu-ray players like the BDP-S480. Crucially, that includes BRAVIA Internet Video, which allows you to stream movies and TV programmes from cyberspace, as well as 3D support.


Surprisingly for a Sony product, it’s not particularly stylish. The main unit, which houses all the audio electronics and the Blu-ray player, features non-descript chunky black bodywork. The curved lip at the bottom (housing a row of playback buttons) is a nice touch, but otherwise it’s pretty bland stuff. That said, it is sturdily built and there’s a useful USB port on the front for playing back digital media.

The front speakers are also visually disappointing. With their gloss-black finish, cloth-covered front panel and trapezium shape they’re far from ugly, but will simply blend into your room’s decor rather than enhance it. Of greater concern is how light and plasticky they are, an inevitable consequence of the bargain price tag. As for the subwoofer, we like the compact cube shape, which should be a doozy to install in your living room, but the exposed chipboard on the rear looks nasty and the passive design is another sign of cost-cutting. 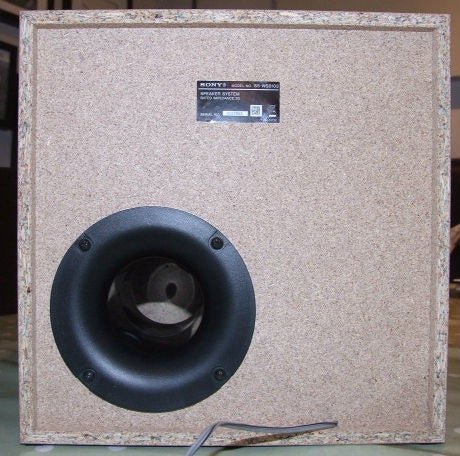 We’re much more impressed by the connections on offer. The back of the main unit sports three HDMI sockets – two inputs and one output – which make it easy to pipe external equipment through the system. The output is v1.4 and supports the Audio Return Channel feature too, so you don’t need an separate cable to amplify sounds from your TV (provided the TV also supports ARC).

Also on the back are an optical digital audio input, analogue stereo input and composite video output, plus an Ethernet port, FM antenna input and a second USB port that can be used to play back digital media or connect a USB wireless LAN adapter (UWA-BR100), as there’s no built in Wi-Fi.

Naturally for such an affordable system you’re not getting every feature Sony has to offer, but there’s more than you might expect. One high profile absentee is DLNA media streaming, leaving discs and USB devices as your only way of playing digital content, but thankfully the system retains the superb BRAVIA Internet Video.

With BBC iPlayer, Demand Five, YouTube, LoveFilm, Eurosport and Sony’s Qriocity on board, not to mention a range of music services, Sony’s line-up of online entertainment is still unrivalled – particularly when it comes to video content – and adds value to any product in which it’s found. On the downside there are no social networking sites, which won’t appeal to frequent tweeters or status updaters.

You can also browse any internet site you like thanks to the built-in browser, although the fiddly operation and lack of Flash support will have you running back to your laptop quicker than you can say ‘cookies’.

Elsewhere there’s 3D support (but no 2D-to-3D conversion) and you even get an iPod/iPhone cradle in the box, another way of liberating your digital music collection (it connects to the rear USB port). When playing media from USB storage devices, the BDV-EF200 supports a healthy range of formats, including MKV, XviD, WMV, MP3, WMA, JPEG and AAC, but this is yet another recent Sony product that doesn’t support DivX, which could be a turn-off if you have loads of movies encoded in this format. But fans of hi-res audio will be pleased to learn that the BDV-EF200 plays Super Audio CD.

There’s a range of sound modes – Music, Movie, Sports and the curiously-titled ‘Game Rock’ – plus you can select to output everything in two-channel stereo. The Options key allows you to access a bunch of picture presets, Standard, Brighter Room and Theatre Room, as well as three different types of noise reduction.

That’s about it on the features front, except for the usual stuff like HD audio support (Dolby True HD and DTS HD Master Audio), BD Live (which requires a 1GB USB device), BRAVIA Sync, a sleep timer, 1080p DVD upscaling and 1080/24p output. Power output is quoted as 350W. 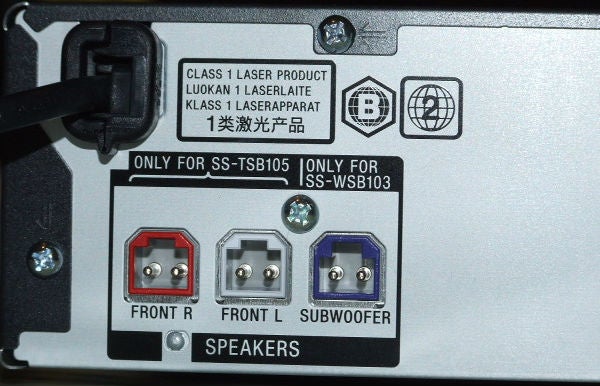 The simple nature of the system makes it easy to setup – the three speakers have pre-attached cables that connect to the back of the main unit using colour-coded plugs. After that the Easy Setup mode guides you through the crucial settings, and main menu’s use of Sony’s tried and trusted Xross Media Bar (with intersecting axes) makes it a cinch to explore internet content or make changes in the setup menu. Of greatest use are the speaker settings, which let you control the volume of each channel, enter speaker distance and check the levels with a test tone.

It’s all controlled by a remote that boasts logical button placement and good labelling, although it is rather cluttered and the volume control is too far down.

We rigged up the BDV-EF200 to Sony’s KDL-40NX723 3D set and first fired up Iron Man 2. Picture-wise the BDV-EF200 is a superb performer, conjuring up majestically detailed images with satisfyingly cinematic depth and a dazzling colour palette.

As Vanko strolls down the middle of the track during the Monaco Grand Prix scene, the crowds in the background and the criss-cross fences on either side look steady and focused, while the intricate machinery and tattoos on Vanko’s body are clear and sharp. And as shredded F1 cars tumble through the air past the floor-mounted camera, the texture of the tarmac on the ground is similarly razor-sharp.

What’s more skin tones look natural and motion is reproduced without any flaws. This also pays dividends when viewing 3D discs like Avatar, as it adds to the overall sense of depth and immersion. The layered images are expertly handled, staying true to what James Cameron had in mind.

If only these excellent images were matched by the sound quality. We played Iron Man 2’s Grand Prix scene with the volume up to 25 (maximum is 35) and what we heard was far from comfortable – the scene’s barrage of loud effects, such as screeching tyres, rasping engines and Vanko’s whip slashing through metal, had us wincing.

It’s powerful, but the tone is harsh and shouty, with a bright edge that makes it uneasy on the ears. It’s OK at lower volumes, but that won’t satisfy those who like to play their movies loud. Dialogue also sounds a little thin, a problem that’s again exacerbated at louder volumes.

But it’s not all bad news. While the passive sub’s bass lacks the depth and responsiveness of a decent active model, it integrates nicely with the other speakers nicely and lends a decent foundation to action scenes. What’s more, Super Audio CDs – and regular CDs for that matter – fare much better than movies, with a smoother and dynamic sound.

On paper, the BDV-EF200 is terrific value for money, bringing you 3D Blu-ray playback, online content, an iPod dock and a 350W 2.1-channel sound system for under £250 online. Picture quality is excellent and the inclusion of two HDMI inputs, two USB ports and decent digital format support are also welcome.

But in practice, sound quality lets the side down with a harsh tone that makes for an uncomfortable listen at loud volumes, while the lightweight build quality and bland design hardly scream ‘buy me’. Not Sony’s finest hour then, but a system that’s not completely without merit should you decide to give it a whirl.