Sony’s BDP-S370 was one of the best budget Blu-ray players of last year, offering a number of snazzy features not always found on entry-level players, such as access to web content via Sony’s brilliant BRAVIA Internet Video. The Japanese AV behemoth follows it up this year with the BDP-S380, which looks like a similar proposition to its predecessor including its lack of support for 3D – if that’s what you’re after, you’ll need to step up to the BDP-S480, S580 or S780.

Like most players at this price point, the BDP-S380 is a slim, slinky unit that should pose no problems being slotted into a crowded AV rack. It’s designed to match Sony’s Monolithic TVs, and as such there’s a moody gloss-black fascia and a protruding lip at the bottom that sports a row of buttons. This gives it a sleek hi-tech appearance, plus the subtle white light in the centre provides extra allure. On the right hand side is a small but legible display panel and a USB port, while overall build quality is satisfying thanks to the sturdy aluminium bodywork.

Rear panel connectivity is pretty much what you expect from an entry-level player like this. There’s an HDMI output of course, which pipes those pixels to your hi-def TV and passes HD audio to your amp. It’s backed up by component, composite, analogue stereo and coaxial digital audio outputs, but there’s no optical output and no multichannel analogue outputs. 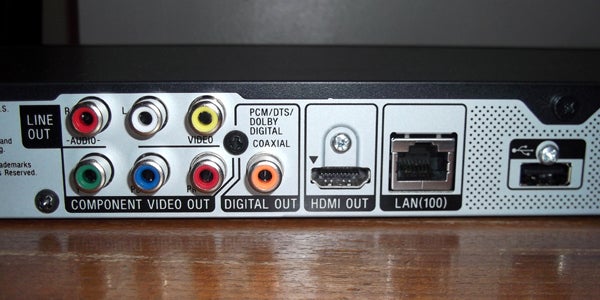 The Ethernet port is on hand to provide a wired connection to the internet, but thankfully the BDP-S380 supports Wi-Fi if you buy the UWA-BR100 wireless LAN adapter, and Sony has kindly put a second USB port on the back to house it.

Being an entry-level player, you miss out on the wider range of features offered by the BDP-S480, S580 and S780. These include support for 3D, DLNA networking, built-in Wi-Fi and (in the case of the BDP-S780) Skype. You can, however, access BRAVIA Internet Video, which despite the best efforts of its rivals still offers the best range of content of any integrated web service. On the video side, you get BBC iPlayer, Demand Five, Sky News, LoveFilm, Video on Demand from Qriocity, Sony Entertainment TV, Eurosport, YouTube, Dailymotion and a range of more specialist applications. On the music side, there’s Qriocity’s Music Unlimited service, the Berliner Philharmoniker ‘Digital Concert Hall’, Moshcam and National Public Radio.

Although you can’t stream content from your PC over a network, the S380 does support local playback of music, video and photos from USB devices. We plugged in a stick and the deck happily played WMA, MP3 and AAC music files, MP4, AVI, MPEG-1 and XviD videos and JPEG photos. However it refused to play our hi-def WMV and AVI files, but even more heinous was its lack of support for DivX. 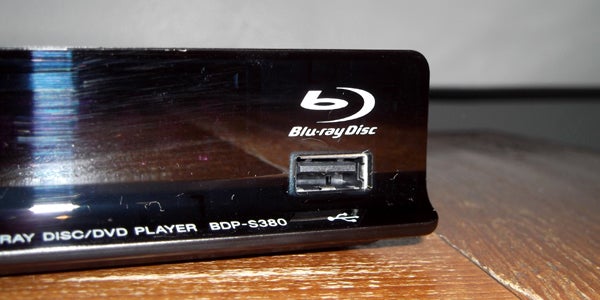 A couple of other features caught our eye, such as the online Entertainment Database Browser uses Gracenote technology to call up information about the disc you’re watching. Even more unusual is the deck’s support for Super Audio CD, which will give fans of hi-res audio something to cheer about. Elsewhere the player supports Dolby True HD and DTS HD Master Audio and 1080/24p video output.

Like Panasonic, Sony has added Smartphone control to the spec sheet, which allows you to operate the S380 using an iPhone, iPod Touch or Android phone, as well as search the internet for content related to what you’re watching. This will be of interest to anyone who can’t stand using the supplied remote, which actually isn’t all that bad. It’s more compact than most Blu-ray remotes and features a clear, intuitive layout with good labelling. The all-important Home button is easy to find, coloured blue and bigger than the other keys.

This makes the player a doddle to operate, but much of the credit for this goes to our old friend the Xross Media Bar, which displays the various categories horizontally, intersected by the corresponding options. But as much as we like Sony’s beloved GUI, the growing amount of BIV content means it can take an age to scroll down to the bottom of the list.

The other onscreen displays are simple and clear. Particularly useful is the Options menu, which can be called up during movie playback and provides quick access to often-used features. It also offers a few video settings, including three presets that tweak the contrast for different lighting conditions – Standard, Brighter Room (higher contrast) and dimly-lit ‘Theater’ rooms (lower contrast) – as well as block and mosquito noise reduction modes.

Just as Sony claims, the BDP-S380 boots up incredibly quickly (the Home menu appears almost instantly after hitting On) and disc loading is also super-quick. It reached the first video segment on the tricky Terminator Salvation platter in 43 seconds, and Avatar loaded up in just 35 seconds.

We kept James Cameron’s sci-fi spectacular in the tray for picture evaluation, and the results are extremely pleasing. The deck stays faithful to the disc’s extraordinarily bright and challenging colour palette, rendering everything from neon plants and bright blue skin to subtle human hues without making any of it look garish or unnatural, which is the first step towards an impressive picture. It also picks up subtle variations in tone and shade and blends them without any banding or ugly block noise. 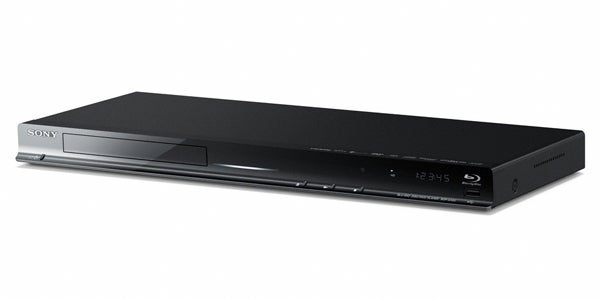 Detail is Blu-ray’s killer selling point and on that score Sony’s doesn’t let the side down. This is as sharp and vibrant an HD picture as you’re likely to see at this price, apart from the Panasonic DMP-BDT110 perhaps, with the deck bringing the movie’s eye-popping array of textures, patterns and complex scenery to life. But there’s also a solidity and clarity to the picture, anchored by dense blacks and excellent shadow detail during dark scenes.

The Silicon Optix HQV disc provides a more rigorous test for the player, but it has no trouble tackling its tricky test patterns. Both the Video and Film Resolution Loss tests are expertly reproduced, with no strobing in the striped boxes and a smoothly rotating bar. The pan across Raymond James stadium suffers a little judder but the seats look crisp and stable. The Jaggies tests show no signs or stepping or feathering along the diagonal lines.

The deck also does a nice job with CDs and SACDs, digging out plenty of detail and generally making music sound enjoyable without coming close to the audiophile refinement of more expensive players.

Verdict
If you can live with the lack of 3D support and media streaming from PCs, the Sony BDP-S380 makes a very tidy choice. Picture quality is excellent and it looks great but the inclusion of BRAVIA Internet Video is the real clincher here – its unrivalled range of content trumps Viera Cast or Samsung’s Smart Hub, adding real value to the overall package. Also pleasing is the top-notch operating system, quickish loading times, two USB ports and unusual features like Gracenote and SACD playback. On the downside it won’t play DivX and apart from Smartphone Control there’s nothing here that wasn’t already found on the BDP-S370, and this dearth of exciting new features could end up pushing buyers toward the better-specified BDP-S480.