It’s been a little over four years since Sony entered the digital SLR market with the launch of the Alpha A100. It did have something of a head start by taking over all of Konica-Minolta’s existing technology, but the current success of the Sony Alpha DSLR range is due to Sony’s innovation, design and clever marketing strategy. Sony now occupies third place in the DSLR market, behind Canon and Nikon, having surpassed industry veterans such as Pentax, Olympus and Fujifilm.


The Sony alpha range currently consists of eight models, ranging from the entry-level A290 to the full-frame professional A900. Launched in January this year the Alpha A450 sits in the middle of the range, and is aimed at intermediate-level photographers, or those who are upgrading from and older entry-level model such as the A230.


Like most of Sony’s APS-C range the A450 has a 14.2 megapixel sensor, in this case Sony’s own Exmor CMOS chip measuring 23.4 x 15.6mm. It’s the same sensor as Sony’s current top-of-the-range APS-C model the A550. Other key features include a 6.7cm (2.7 inch) Clear Photo LCD monitor with a resolution of 230,400 dots, a large bright viewfinder with a proximity sensor, and Sony’s SteadyShot sensor-shift image stabilisation system. 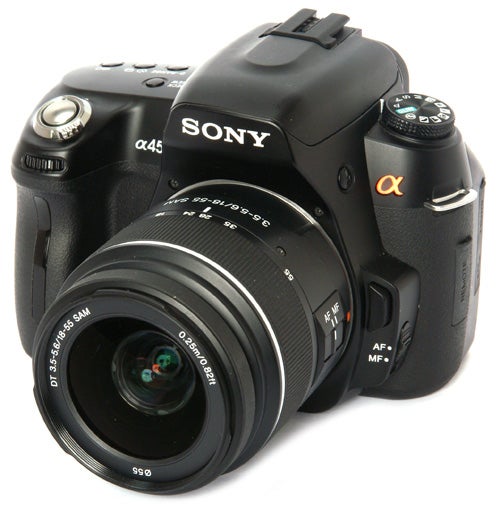 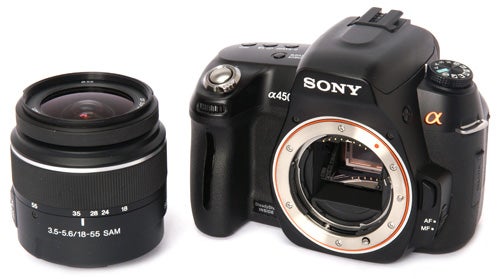 Another feature notable by its absence is Sony’s usual highly effective live view autofocus system, one of the highlights of other models in the Alpha range. The A450 does have live view, but to use autofocus in this mode the mirror has to flip down and then up again, which blanks out the display and also takes a couple of seconds. Obviously this limits the usefulness of the live view mode as a whole, and again is an area where it is surpassed by its main rivals

The A450’s lack of sophistication is all the more surprising considering the size and weight of the thing. It shares a bodyshell design with the more advanced A500 and the APS-C flagship A550, but where both these cameras feature an articulated 3.0-inch monitor, with 921k resolution in the case of the A550 , the A450 has a smaller, cheaper fixed 2.7 inch screen with a resolution of only 230k dots, with a wide surrounding frame. It is a physically large camera, 10mm wider, 7mm taller and 19mm thicker than the EOS 500D, and 50g heavier. It is also larger and heavier than the Nikon D5000. 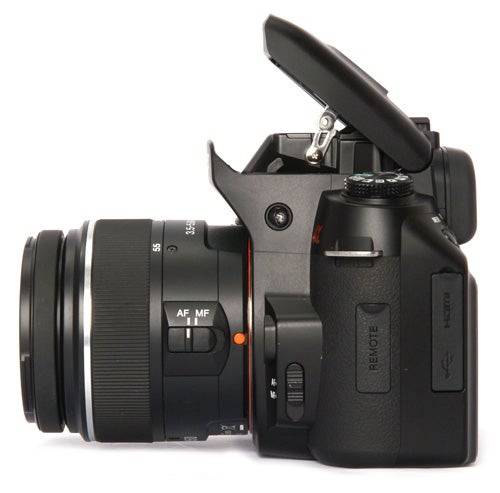 The thickness of the body and the size of the grip make the camera a handful to hold even for those (like me) with large hands. The weight makes it hard to handle comfortably, especially when trying to operate the controls. Despite the camera’s bulk it doesn’t feel as solidly made as some other DSLRs, and some aspect of the build quality could be better. The battery and card hatches feel a bit flimsy, and the control buttons feel rather spongy and lack tactile feedback. 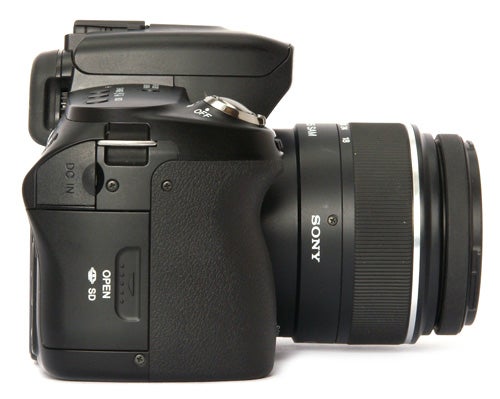 Like most mid-level DSLRs the A450 has a large number of control buttons arranged over its body, although it has fewer than some rival models. The top panel holds dedicated buttons for ISO setting, self-timer and drive mode , the D-Range optimiser feature and the live view mode, while the angled upper part rear panel includes buttons for exposure compensation and exposure lock on the right, with menu and display mode buttons on the right. The back of the camera is even more sparsely populated, with only the playback and delete button, the function menu button and a simple D-pad with no secondary functions. 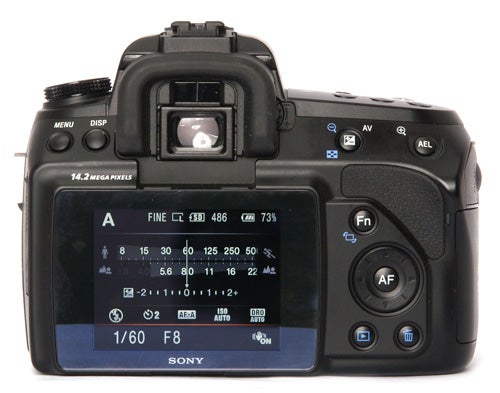 The function button brings up a quick menu which allows adjustment of most common shooting options including metering mode, autofocus options, flash modes and the Creative Styles tone adjustment feature, but also duplicates the function of several of the buttons, such as ISO setting and drive mode. The main menu holds a similarly limited number of options, with only basics such as image size and quality (including Raw and Raw + JPEG), image stabiliser (on or off), a choice of Adobe RGB or sRGB colour space and a few more basic options, including image aspect ratio. The main section of the menu is only just over one page, and exhibits considerably less customisation than most other mid-level DSLRs. 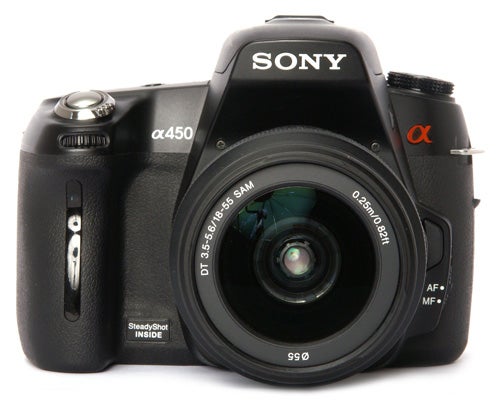 One good point is the viewfinder, which has a nice wide screen with the nine AF points clearly marked with red LEDs, and a decent data display along the bottom. It has a 95 percent field of view and 0.83x magnification, with dioptric correction for spectacle wearers. There are two proximity sensors just above the viewfinder for the Eye-start AF feature, which focuses the camera as soon as it is held up to the eye. 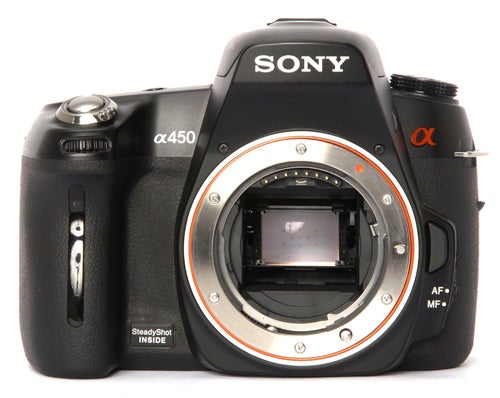 The overwhelming impression of the A450 is that Sony has taken the much better A550, which sells for around £600, and stripped out a number of features to get the camera on sale below a certain price point. As a result the camera always feels as though it is lacking something, and that it could have been much better if only a little more money had been spent. This is indeed true, because then it would have been an A550.

Fortunately one feature that survived the axe is the excellent Bionz image processor, and the A450 does have basically the same performance as the A550. It can start up and take a picture in well under a second, and in single shot mode it can manage slightly more than one frame a second, and keep it up apparently until the memory card is full, which is fast but not exactly ground-shaking. The real performance comes in continuous shooting mode. A450 actually has three continuous shooting modes; a high and low speed standard mode, with autofocus between shots and a maximum speed of 5fps for approximately 30 shots, and a Speed Priority mode, which only focuses for the first shot, but can shoot at a very fast 7fps for approximately 20 shots. Remarkably it can even shoot at this speed in Raw + JPEG mode, although only for seven frames. This is considerably faster than the Nikon D5000, and roughly twice as fast as the Canon EOS 500D. 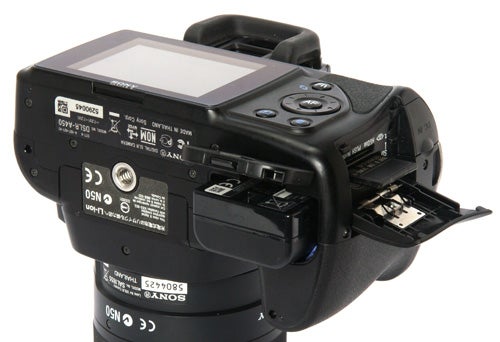 The A450 has the same nine-point autofocus system, with a cross-shaped centre sensor, as most of the other APS-C cameras in Sony’s range. It’s proved itself well before, and provides fast and reliable performance in a wide variety of lighting conditions, and is quite effective even in low light. The A450 doesn’t have a separate AF assist lamp, but if the flash is popped up it can operate as a very fast strobe to help with focusing in very low light.


At least limiting the camera’s features means there’s less drain on the battery, and since that battery is a big 1600mAh InfoLithium cell the charge duration is excellent. After approximately two weeks of regular use the battery was still reading as 66 percent full.


Of course the proof of the camera is the image quality, and here the A450 has some mixed results. Overall the quality was very good, with accurate exposure and focusing, good colour and dynamic range and plenty of fine detail, especially in Raw mode shots. On the other side of the equation, the standard 18-55mm kit lens does produce some slight chromatic aberration towards the corners of the frame. There is also some wide-angle barrel distortion, but this is not unexpected. More annoyingly the lens is very prone to flare when shooting into the light, an effect which spoiled several otherwise good shots. 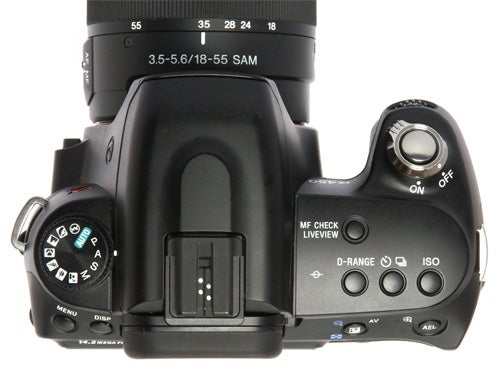 Equally annoying is the A450’s noise control. After the superb results from the Sony NEX-5 earlier this week I has understandably high hopes for another 14MP CMOS sensor Sony camera. Unfortunately the results weren’t anywhere near as impressive. The camera has an ISO range of 200-12,800, but even as low as 400 ISO noise effect are visible, ans the noise reduction system starts binning detail from 800 ISO. The only way to get the best out of the A450 is to use it in Raw mode all the time, and stick to 200 ISO.

The Sony Alpha A450 is an in-between camera, neither as cheap as the A390 nor as well specified as the A550. It feels like it’s been made down to a price rather than up to an aspiration, and the corners that have been cut are exactly where it will lose out to its more expensive but better-equipped competitors. It has outstanding performance, but that alone is not enough to sell it. If you want a Sony DSLR, save up a bit more and get an A500 or A550 instead. 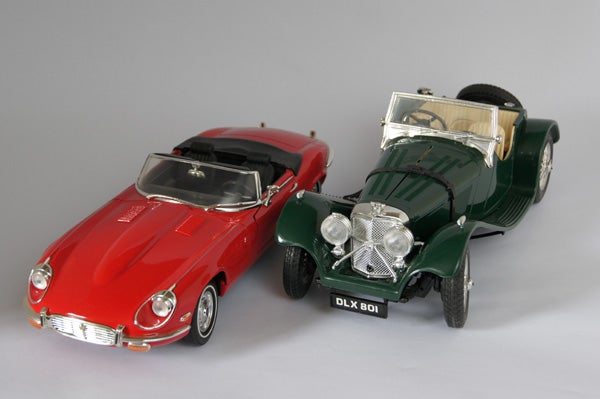 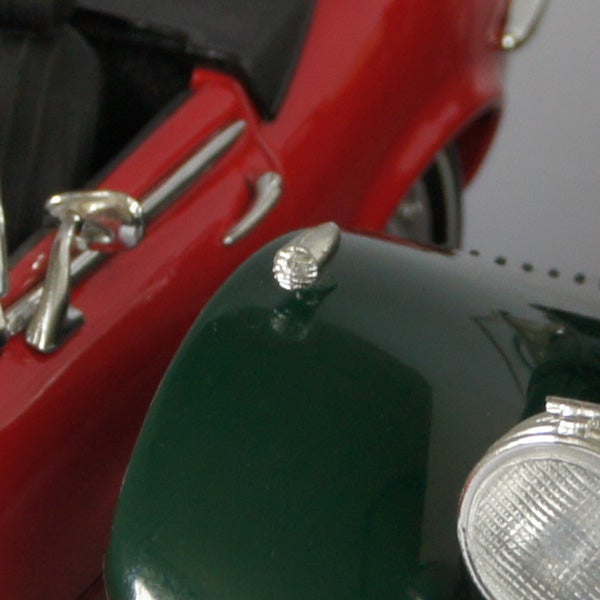 Image quality at 200 ISO is very good, with no visible trace of noise. 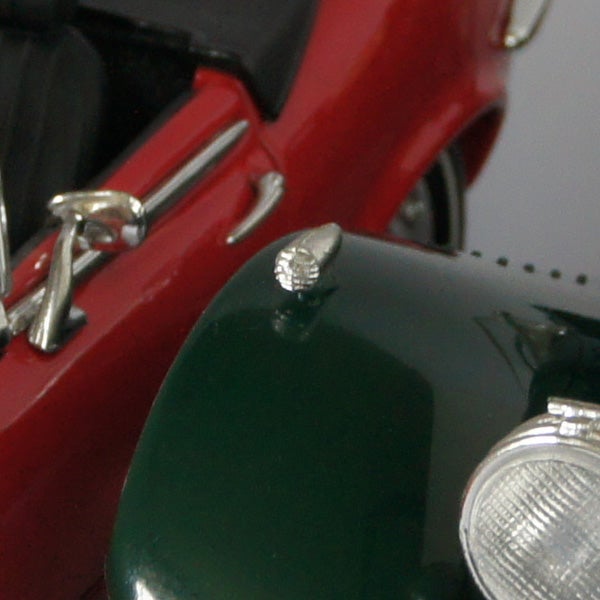 At 400 ISO there is some distortion in the red channel colour gradient, and a light dusting of noise. 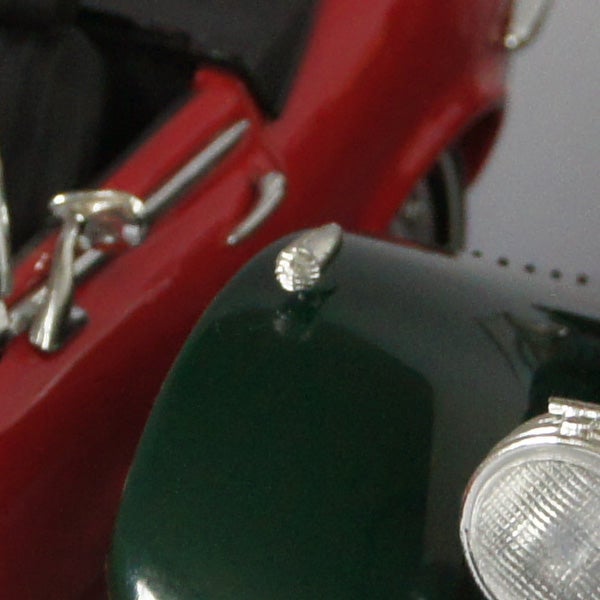 At 800 ISO the noise reduction kicks in and blurs out some fine detail. 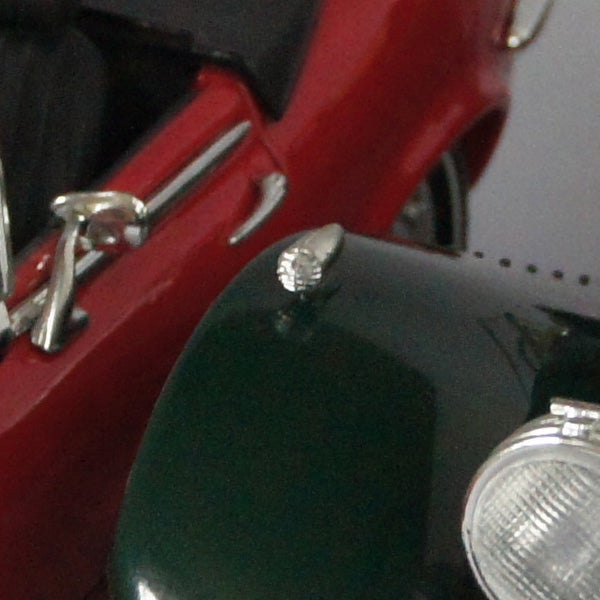 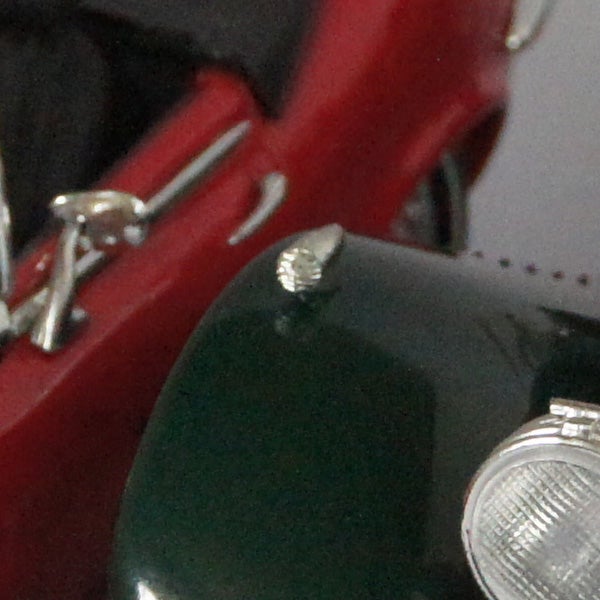 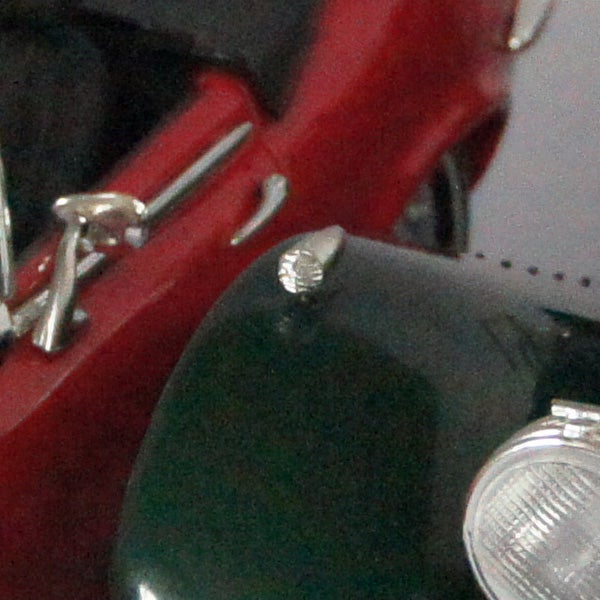 More noise at 6400 ISO, and colour distortion in the green channel too. 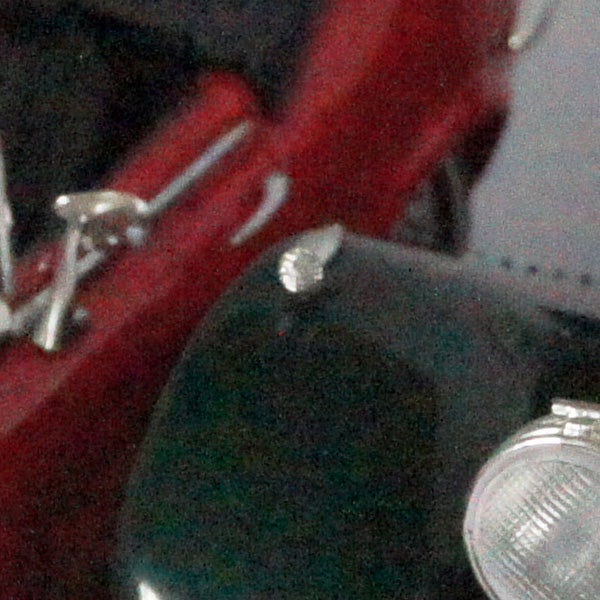 Image quality at the maximum 12,800 ISO is very poor, with lots of noise and little fine detail. 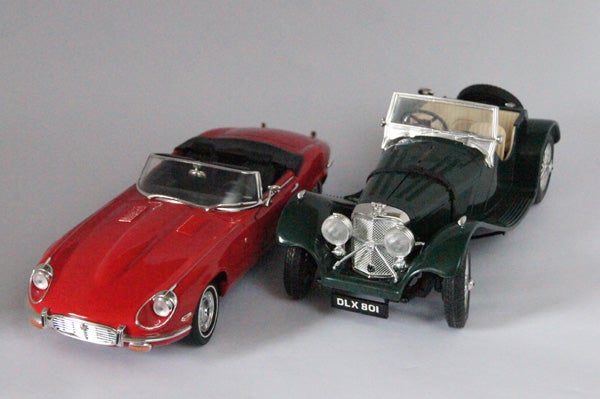 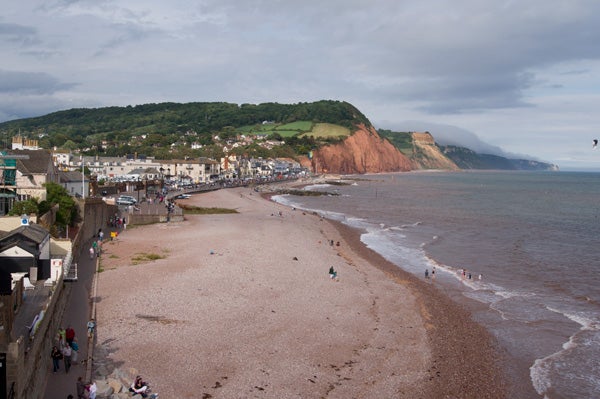 Here’s my usual DSLR test shot of Sidmouth seafront for comparison with other cameras. Click on the image to download a full-size version, but be aware that the file is 5.6MB. 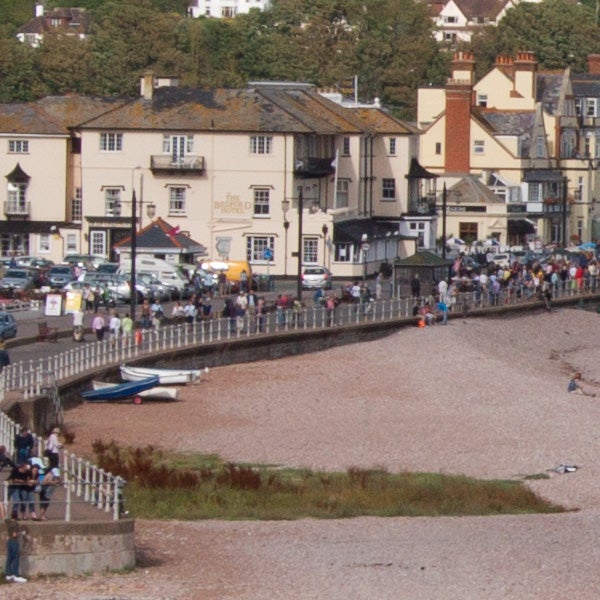 This is taken from the above image, which was converted from a Raw file shot. Compare the image quality with the Canon EOS 500D and the Nikon D5000, as well as the Sony NEX-5. 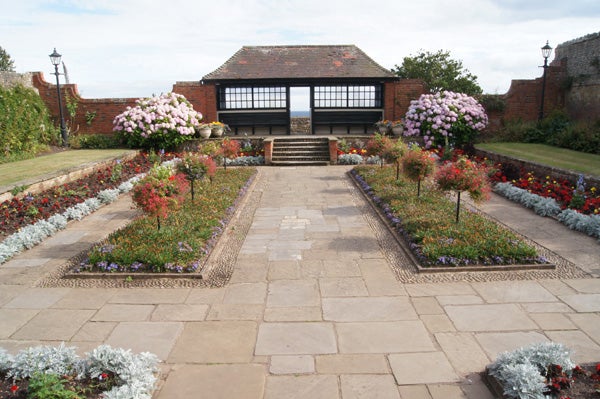 The kit lens does produce some barrel distortion at wide angle. 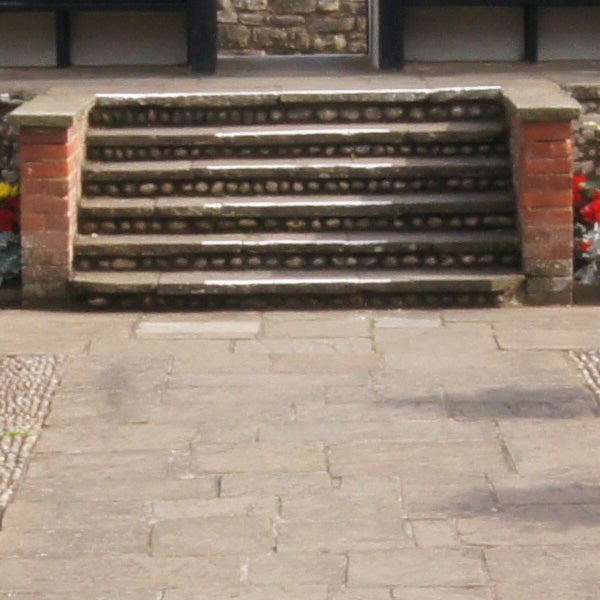 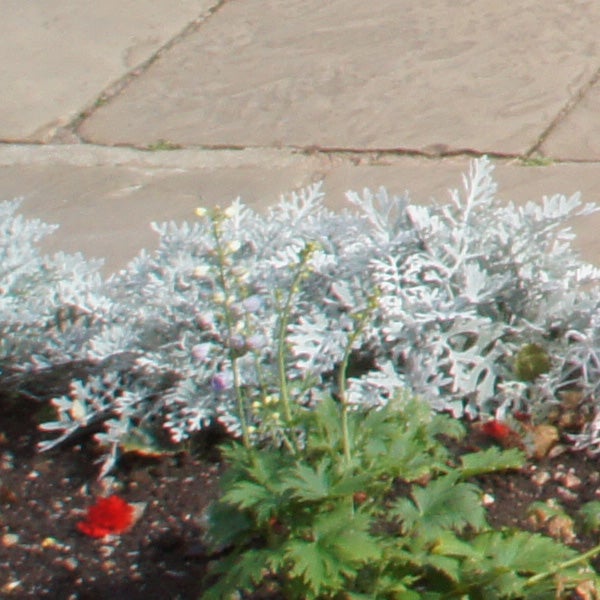 There is slight corner blurring and chromatic aberration at the far corners of the frame. 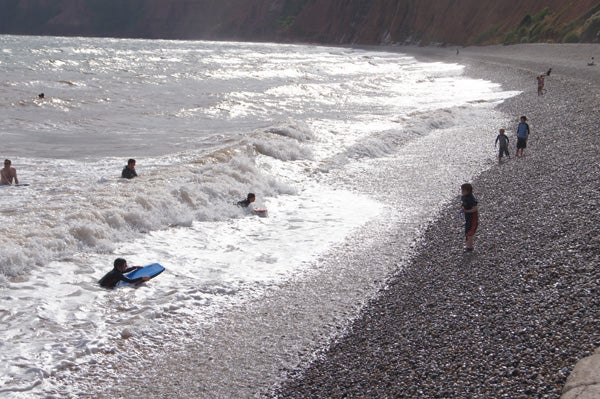 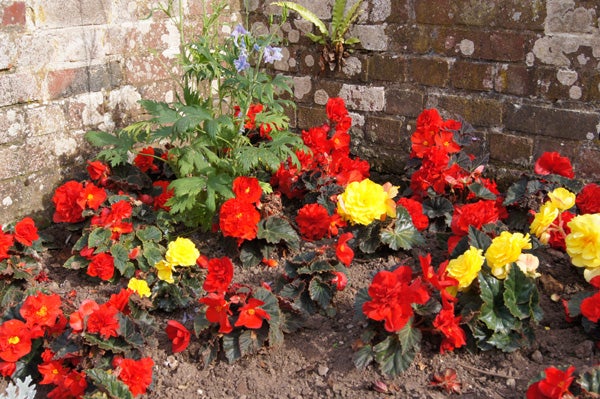 Colour rendition in the standard Style mode is very natural. 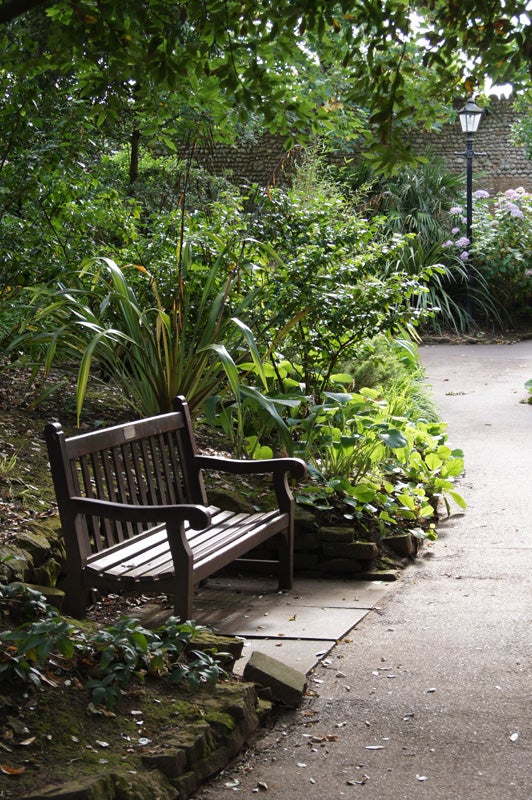