In our feature covering the tech we saw on our recent trip to Tokyo with Sony, we mentioned that we had spent quite a bit of time in the company of Sony’s upcoming HX853 series – specifically the 55in model with full model name Sony Bravia KDL-55HX853. So with Sony’s new ‘quality first, last and always’ message ringing in our ears, we thought we’d get into more detail on what’s looking likely to be a key model for the Japanese brand when the set launches around April.

The HX853 series will rest one step below Sony’s HX923 flagship models. Which is a bit odd in some ways, for with Sony deciding to carry the HX923 through from 2011 until at least the latter stages of 2012, the HX853 will have one or two key features that the TV that sits above it in Sony’s range does not have. In particular, the 55HX853 benefits from Sony’s newly developed X-Reality Pro 3D processing, designed to boost both the sharpness and the sense of depth of 3D pictures. We were given an extended demo of this in action, and were extremely impressed with what we saw. Both foreground and background picture information was clearly sharper and more detailed, and it was a massive relief after our experience with some of Sony’s 2011 3D TVs to find these results delivered without emphasising crosstalk. 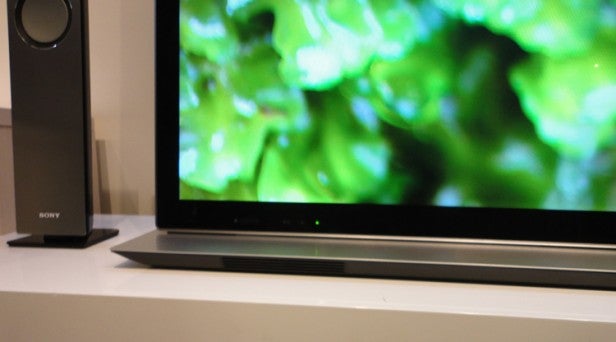 In fact, crosstalk on the 55HX853 didn’t look a major problem at all; fingers crossed this continues to be the case once we’re able to unleash a few of our favourite crosstalk-inducing scenes on the TV in our test rooms.

The 55HX853 also gives us a first glimpse at Sony’s refined Monolithic design for 2012. Sony has attempted to ‘feminise’ its mostly successful style slightly, adding a slender metallic trim around the edge of the glass-topped black bezel, and creating a connection with the new aluminium stand that lets the TV look like it’s just floating on the stand’s surface. Its rear is designed so as to emphasise the TV’s slimness, too. All in all the 55HX853 is very attractive indeed, and marks a clear aesthetic step forward from previous models.

The 55HX853 uses edge LED lighting rather than the direct LED system found in the HX923 series. But from the evidence we saw during our time with the TV – which included 90 minutes studying it alongside an array of five other TVs from other brands – it’s an exceptionally sophisticated edge lighting arrangement. Certainly using the set’s movie mode we could hardly discern any backlight inconsistencies at all, despite many of the images we were shown containing precisely the mix of light and near-black material that seems tailor-made to cause edge LED technology problems. 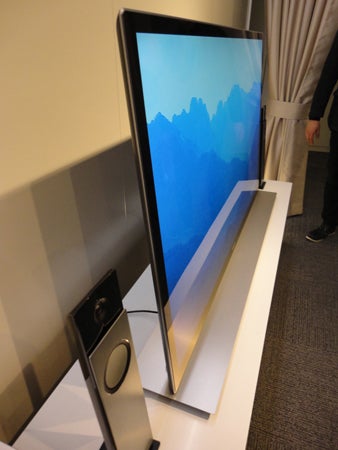 This was even though black levels were the deepest of any of the other edge LED TVs in the multi-screen demo room, and despite the fact that the bright parts of the image still looked punchy and sharp. This ability to deliver a vibrant image while still producing a convincing black is a real improvement over many of last year’s Sony edge LED TVs.

The 55HX853 also excelled with its colour reproduction. The X-Reality Pro processing system inside the set cunningly processes colours in 14-bit, which means that by the time they hit the screen they’re practically completely free of the sort of colour banding and striping you usually find to some degree with flat TVs.

The X-Reality Pro processing also helps pictures look sharp and detailed, with dark scenes enjoying much more shadow detailing than anything witnessed on last year’s Sony screens. Even ropey feeds from the Internet look startlingly sharp and clean, thanks to the clever ‘database’ system used by X-Reality Pro, which recognises the type of source that it’s being fed and then applies a pre-defined set of processing rules to it. 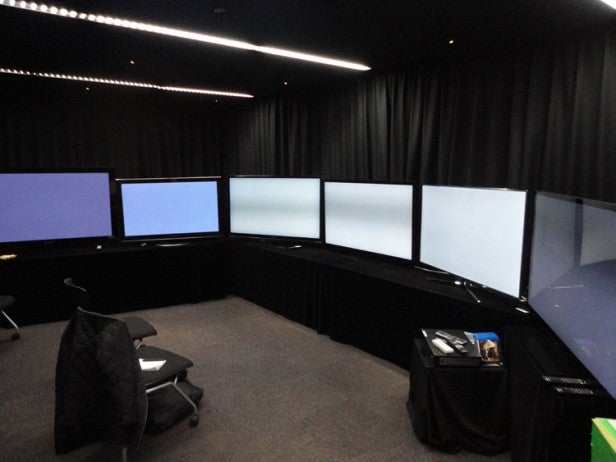 Add to all these apparent picture benefits the promise of improved sound via the speakers built into the attractive new desktop stand and an apparently much-improved version of Sony’s Bravia Internet Video online platform, and you know, Sony really might be looking set fair to deliver on its promise to get back to making the sort of top-notch tellies for which the brand was once famed.