If you asked us to pick the TV at this year’s CES that delivered the absolute best picture quality, it would be Sony’s 56in 4K OLED TV.

Although only currently a ‘concept’ product with no firm release date or finalised spec, the two demo units of this remarkable 56in screen running on Sony’s CES stand managed to deliver every last bit of everything we’ve already grown to love about both OLED and 4K. Particularly amazing was the amount of detail we could see. Obviously any 4k screen will deliver levels of image information and sharpness you could never dream of seeing on a full HD TV, but couple a native 4K resolution with the lack of motion blurring that’s such a key part of OLED’s appeal and you really have got a level of clarity beyond anything ever seen on a TV before. 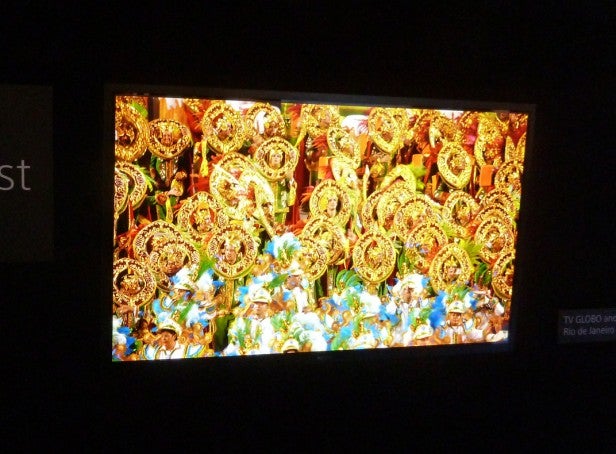 We noted this, too, on Panasonic’s 4K OLED. But Sony allowed us to get much closer to its 4K OLEDs than Panasonic did, which really rammed home the picture glories Sony’s screen was serving up.

Sony uses a proprietary OLED design on its new TV so called Super-Top Emission technology, which places the OLED materials right at the top of the panel surface, rather than making their light have to travel through other layers. This appears to lead to even richer colours than you usually get with OLED technology.
Also key to the visceral impact made upon all who beheld the Sony 4K OLEDs was the source material being used. For on one of the screens you could watch some native 4K footage shot at the Rio Carnival in 2012 that was far and away the most stunning 4K demo footage we’ve ever seen.

Everything you could wish for when trying to assess picture quality was there in this footage; deep black night skies, stunning colours in all the extravagant outfits, huge detail levels in the glitzy frequently sequinned and feathered outfits, and ceaseless motion in almost every part of the image. And rather than stumbling over any of these potential picture hurdles, the Sony 4K OLED gobbles them up as if handling them all was the easiest thing in the world.

In particular, the way the screen can produce seemingly infinitely deep blacks without a hint of backlight inconsistency and hold on to even the tiniest of costume details no matter how frenetically the costume’s wearer might be dancing is nothing short of revelatory.

Moving around the screen also reminded us of OLED’s advantage over LCD when it comes to being able to support a wider viewing angle. In fact, Sony’s screens seemed even better than other OLEDs we’ve seen in this respect – another side effect of the panel’s Super-Top Emission structure.

As noted earlier, Sony’s remarkable OLED 4k panel is supposedly only at concept stage right now. But it’s worth noting that while chatting to one of Sony’s American representatives on the stand, he suggested that ‘this is a finished TV, you know. It’s real’. And when pushed on it further, he said the same thing, only with a wink this time. In other words, maybe, just maybe, this show-stealing TV might actually become available sooner rather than later. Mind you, even if it does, we suspect that the chances of us actually being able to afford to buy one are less than zero.