If you’re a regular reader of TrustedReviews you’ll know that I quite like Sonos kit. In fact the most recent Sonos BU250 bundle walked away with an Editor’s Choice award. Put simply, if you want digital music streamed throughout your house, a Sonos system is about as good as it gets, before you start looking at custom installs. But best of all, Sonos has managed to make its system supremely easy to setup and use, even for the technology novice. 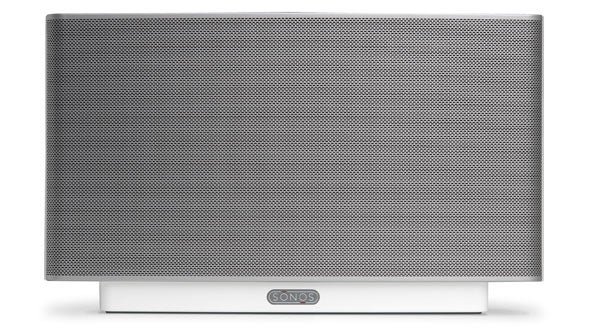 But Sonos is determined to make its wireless digital music systems even more accessible and easy to use than before, with the introduction of the ZonePlayer S5. Previously, the simplest way to configure a room with Sonos kit was to use a ZP120, which has built-in amplification. Then you just had to hook up a set of bookshelf speakers and you were ready to rock. The new ZP-S5 makes things even easier, since it has all the advantages of an amplified ZonePlayer, but also has built-in speakers.


The beauty of the ZonePlayer S5 is that it addresses a whole new customer who probably couldn’t afford a Sonos system before. It’s clear that Sonos is well aware of this market, because even the box that the ZP-S5 comes in suggests that you use your existing iPhone or iPod touch as a controller, rather than Sonos’ own CR200. You’ll probably still need a BR100 ZoneBridge to hook up to your router though, unless you’re planning to put your ZP-S5 in the same room as your broadband connection. 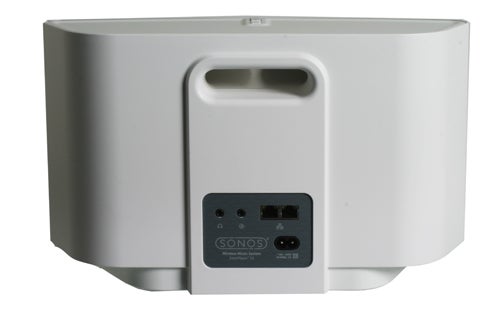 Although Sonos is obviously looking at attracting new customers with the ZP-S5, it’s a pretty attractive option for existing Sonos users too. This is the perfect solution for a bedroom or kitchen, where ultimate sound quality isn’t paramount and a one box solution is a far better option. I know that I don’t really want speaker cables draped around my kitchen, or bookshelf speakers for that matter.


Despite its all-in-one nature, the ZP-S5 isn’t what you’d call small, or even unobtrusive – with dimensions of 365 x 217 x 123mm (WxHxD) you’ll know it’s there, whatever room you decide to put it in. But this isn’t necessarily a bad thing, since Sonos has been smart enough to realise that making the ZP-S5 sound good, is far more important than making it look good.

Don’t get me wrong, I don’t think the ZP-S5 looks bad – it’s finished in the same white and grey livery as every other bit of Sonos kit – but it’s not going to be a highlight to your minimalist décor in the way that the Bowers & Wilkins Zeppelin is. To put this in perspective, my wife loves the way the Zeppelin looks, but thinks that the ZonePlayer S5 is ugly – I’m not sure I agree, but the fact remains that you can probably sneak a Zeppelin into your living room without argument, while a ZP-S5 might take some negotiation.


Face on, the ZP-S5 is dominated by a rectangular speaker grille, with a recessed white stand below it. Viewed from above, it takes on a trapezoid shape, showing that there’s a reasonable amount of depth to the cabinet for housing the drivers.

Talking of drivers, you’ll find no fewer than five inside the ZonePlayer S5 – you get two tweeters for high frequencies, two mid-range drivers and a single subwoofer to ensure that bass response is well taken care of. Each driver is powered by its own digital amplifier, while crossover duties are also kept in the digital domain thanks to Sonos’ custom DSP technology. Presumably Sonos has included its active crossover DSP circuitry in the S5’s DAC, making it the final stage of digital processing before the signal becomes analogue audio.


The results are very impressive, more so than I had expected in fact. Compared to almost any all-in-one speaker system or iPod dock, the ZonePlayer S5 is a cut above. Whether you’re comparing to any number of iPod docks, or multi-room systems like Philips’ Stremium, Sony’s GigaJuke or Logitech’s speaker equipped SqueezeBox products, the ZP-S5 sounds, simply better. However, Sonos still can’t match the truly incredible sound quality produced by the Bowers and Wilkins Zeppelin, but then B&W is primarily a speaker manufacturer, so that’s hardly surprising. 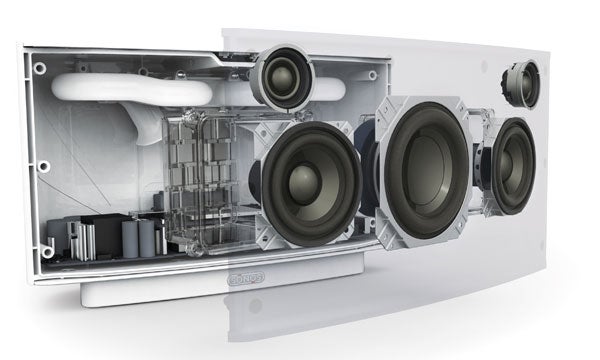 There’s no doubt that the ZonePlayer S5 will convincingly fill a room – I found that I could happily listen to the music in the next room without pushing the volume past halfway. There’s a surprising amount of bass, but it doesn’t make the sound muddy as a result, and thankfully doesn’t distort when the volume is pushed high. The bass is never overpowering either, no doubt thanks to the quartet of high and mid-range drivers, leaving you with a good degree of clarity.

White Rabbit by Jefferson Airplane (yes I know that it was originally performed by The Great Society) sounds suitably haunting through the ZP-S5, but it’s the expansive soundstage that it produces that really impresses. Grace Slick’s unmistakable vocals float above the music, as if the two were separate entities. This track is a difficult audition for any all-in-one music system, but the ZP-S5 turned in a glowing performance. 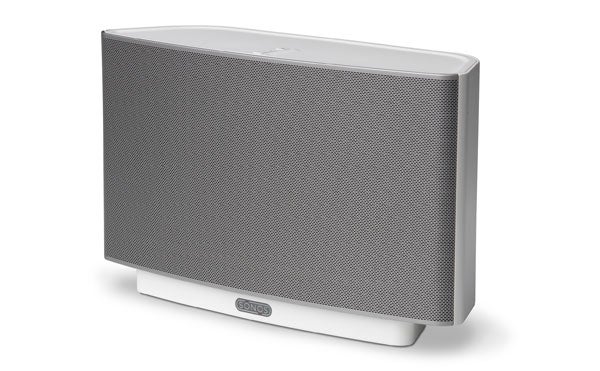 Heading off at a tangent I queued up He Got Game by Public Enemy, which samples Buffalo Springfield’s classic, For What It’s Worth. Once again the ZP-S5 acquitted itself well, reproducing the heavy background beats without detracting from the vocals. In fact it’s fair to say that the ZP-S5 does a great job with hip hop and R&B fare, while handling most flavours of pop with similar aplomb. It doesn’t sound quite so accomplished with rock music, but then few all-in-one systems do, B&W Zeppelin excepted.


Setting the ZonePlayer S5 up is simplicity itself, whether you’re already a Sonos user or not. If you already have a Sonos install you just put the ZP-S5 into discoverable mode, and then search for a new zone using your Sonos controller, or PC client. A few seconds later the ZP-S5 will be added to your list of Zones and you’re ready to go.


Even if you don’t already have a Sonos system in your home, installation is a breeze. You either hook the ZP-S5 directly up to your router, or hook the optional BR100 ZoneBridge to your router and then place the ZP-S5 anywhere in your home. Once you’ve powered on the ZP-S5, you simply load up the Sonos Desktop client on your PC and search for a new Zone. Then you just download the Sonos app for your iPhone or iPod touch, and you’re all setup and ready. 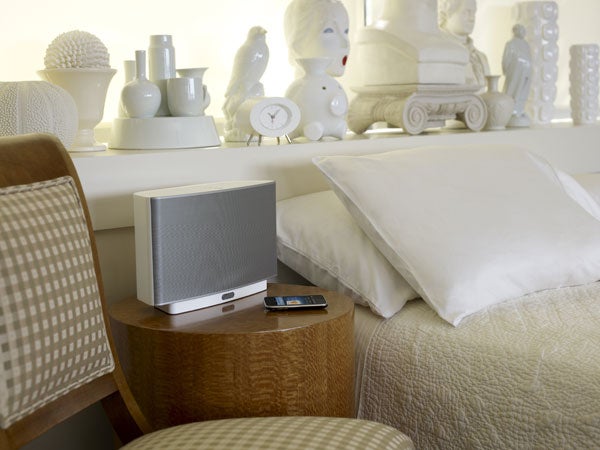 Usability is fantastic, as it always is with Sonos, although while setting up the ZP-S5 I was prompted to download an update for my CR200 controller, which provided subtle changes to the interface, making it even better than before. But whether you’re using an iPhone or the CR200, using the ZP-S5 is a joy – whether you’re streaming your own music from a PC or NAS appliance, or whether you’re listening to Last.fm or Napster.


Now that the monthly fee for Napster has dropped to £5 per month, along with five free downloads each month, you’d be mad not to sign up. Napster gives you access to a music library of over eight million songs, and with Sonos, you don’t need to use a computer to listen to them.

At the rear of the ZonePlayer S5 you’ll find two Ethernet ports, which will let you either connect it directly to your router, or use it as a wireless bridge for other devices. There’s also a headphone socket, in case you want to listen to your music without disturbing others, while the line-in port lets you hook up another source, like an MP3 player, and pump the sound through ZP-S5. 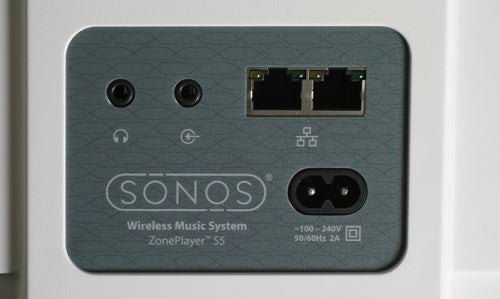 The ZonePlayer S5 will set you back £349, which isn’t an insignificant sum. Add to that, the fact that you’ll probably also need a BR100 ZoneBridge to get connected to your router and the price rises to £428. However, that’s still around half the price of the BU250 bundle, so it’s fair to say that the ZonePlayer S5 makes Sonos far more accessible.


The ZonePlayer S5 makes a great starting point for a Sonos system, especially for anyone who was thinking of buying a high-end iPod dock anyway. Kick things off with a ZP-S5 and you can always add another zone later, or even invest in CR200 controller. And that’s the beauty of Sonos, it can grow with you and your needs, allowing you to stream your music to any room in your house. 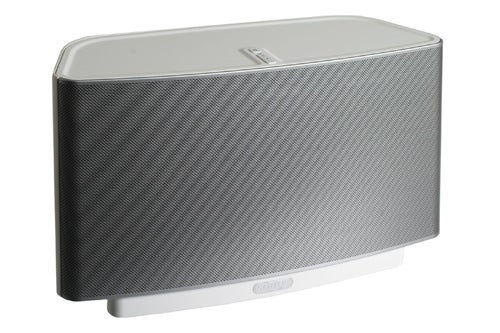 
The ZonePlayer S5 is a natural progression for Sonos, taking the simplicity of its wireless music system to the next level. Coupled with the Sonos iPhone app, the ZP-S5 will open up Sonos wireless music to a whole new market, acting as an affordable foundation for a Sonos installation.


It’s also worth remembering that the ZonePlayer S5 will seem just as attractive to existing Sonos users who have been looking for an all-in-one solution for rooms where sound quality isn’t quite so important.


With the introduction of the CR200 wireless controller a couple of months back, and now the ZonePlayer S5, it’s clear that Sonos isn’t resting on its laurels. The best wireless digital music system just keeps getting better.