If you’re a regular TR reader you’ll be well aware of our love for rugged technology. Panasonic’s ToughBooks for instance, have received some serious abuse while in my care, but so far they’ve managed to survive everything we’ve thrown at them. It seems now though, that the idea of having rugged kit is catching on a bit, with more notebook vendors offering ruggedised notebooks, and more rugged handheld devices starting to appear. And of course, there are more ruggedised mobile phones appearing, although it has to be said that the vast majority of them are just standard models with a rubber casing and better seals around the buttons and battery compartment. 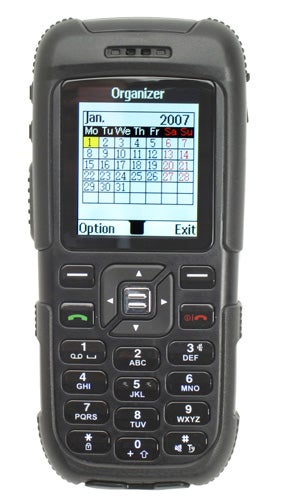 I was therefore quite keen to get my paws on the Sonim XP1, which claims to be a fully rugged phone. In fact, if Sonim is to be believed, the XP1 can handle even more punishment than a fully rugged Panasonic ToughBook, and that’s saying something! There’s no denying that the XP1 looks the part, with a tough and textured hard plastic shell surrounding it. What surprised me though, was how small and light this phone is, making it clear that Sonim has designed it from the ground up to be rugged, rather than trying to make a standard handset a little tougher. Measuring 113 x 50 x 22mm (HxWxD) and weighing 129g including battery and SIM card, this is far from the big and heavy brick you’d expect a rugged phone to be.


The colour screen measures 4.5cm, and is surprisingly bright and vibrant considering that this is a rugged phone. The resolution of 128 x 160 pixels however, is very low by today’s standards, but then this isn’t a handset that you’re likely to be viewing photos on, especially since it doesn’t have a built-in camera. Of more importance is that the screen itself is set very deep into the casing, with a hard, scratch resistant cover protecting it. This means that even if you are rough enough with the XP1 to break the plastic cover, the screen below should remain intact, leaving the phone to continue operating normally. This point was proved when we did some real world testing on the XP1’s rugged credentials, but I’ll come to that a bit later. 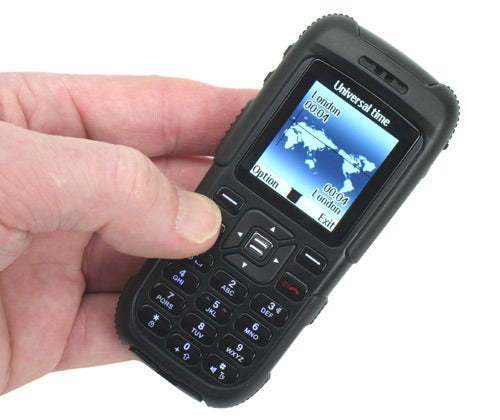 The phone itself is a tri-band affair, supporting GSM 900, 1800 and 1900 standards, so you should be able to use it in most parts of the world. That said, this isn’t the sort of phone that you’ll be travelling abroad with too often. There’s Bluetooth support, but only version 1.2 – not that you’re likely to need A2DP stereo streaming from a rugged phone. The important thing is that you can use a Bluetooth headset or handsfree kit, although there is a 2.5mm port for using a wired headset too.

In use the XP1 behaves exactly the way you’d expect a basic phone to behave. There’s nothing flashy or clever about it, it just does what it’s supposed to do, allowing you to make and receive phone calls. You can store up to 500 contacts, which should be enough for even the most friend laden user.

The design of the keypad also holds no surprises. You get call and end buttons, with soft keys above each of these for accessing sub menus. Nestling in the centre of this cluster of buttons is a four-way navigation pad with the select button in the centre – all standard stuff. Below this is a bog standard numeric pad made up of buttons that are easy to access compared to many of today’s touch sensitive handsets. 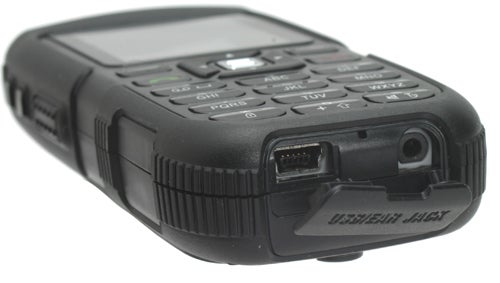 On the left edge you’ll find dedicated volume buttons and a push-to-talk button. The latter isn’t going to be of too much interest to UK users, although PTT has received reasonable usage in the US. On the right edge is a rubber bung that protects a connector for an external antenna, in case you find yourself with poor reception. Finally at the bottom is another rubber bung that protects the 2.5mm headset jack and the mini-USB port that’s used for charging the phone. 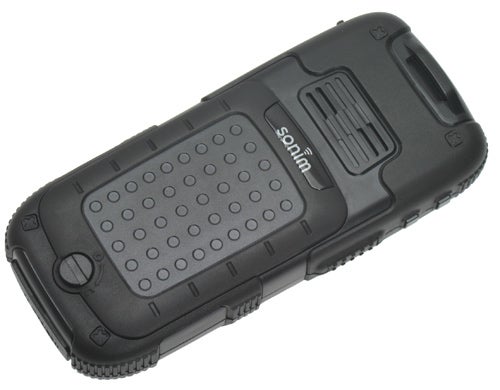 The XP1 managed to grab a decent signal and hold onto it using a variety of SIM cards on different networks, which is more than I can say for my iPhone! Call quality is clear and the ruggedisation of the phone doesn’t seem to have affected its performance in any way. Battery life is also pretty impressive, which is handy for anyone who doesn’t want to carry the charger with them when going away for a few days trekking or cycling.

But the real story with the Sonim XP1 is its bullet proof build quality, this is a phone that’s designed to survive anything that you throw at it, no matter how rough your lifestyle. As usual when we test a rugged device, we dragged the XP1 kicking and screaming out into the car park for some punishment. The XP1 didn’t even blink when we dropped it from shoulder height, and even when we climbed up a flight of stairs and dropped it onto the concrete, it didn’t flinch and continued to function perfectly. Even when Hugo stamped on the phone and kicked it across the car park, it continued to work, despite picking up a few scratches in the process.


Taking things to the next level, Andy jumped in his car and we placed the Phone in front of the wheels. Despite the XP1 pleading for a reprieve, evil Andy drove over it with both front and back wheels. Again the XP1 survived the punishment completely intact. But it was when we tested the water resistance that things took a turn for the worse. Placing the XP1 on the ground and pouring water on it didn’t seem to bother it at first, but pretty soon the screen was full of condensation and the phone switched itself off. Although the XP1 powered back on, and seemed to work ok for a couple of minutes, it soon shut itself down again.

Unlocking the back cover and whipping it off revealed that the rubber seal protecting the battery and SIM compartment from water ingress hadn’t done as good a job as it should have. There were definite traces of water inside the phone, which surely couldn’t be a good thing! Drying the inside out as best I could, I put the XP1 back together and turned it on again – this time it stayed switched on, but the centre row of buttons simply refused to respond.


I have to say that of all the punishment we dished out on the XP1, the water spill test was the one that I was least worried about, so it comes as a major surprise that water ingress seems to have caused the phone to fail. I can only assume that this particular unit had faulty seals, since the Sonim site clearly shows an XP1 completely submersed in water without issue. On the plus side, Sonim does claim to offer a three year “unconditional” guarantee on the XP1, so at least a customer who ends up with a wet, dead phone, should be able to get a replacement without too much hassle. 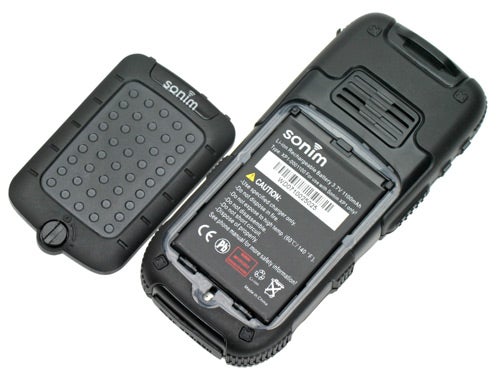 Price wise, you can pickup an XP1 SIM free for around £225, or if you’re happy to sign up with a Vodafone contract you can get it for free on a 12 month contract – although that appears to be the non Bluetooth version. The latter will be attractive to any businesses that want to equip their field workers with rugged phones, it just depends on how rugged you need the phone to be.


The Sonim XP1 can definitely survive a lot of abuse, there’s no denying that – any phone that can shrug off being run over by a car is tough by anyone’s standards! Unfortunately the XP1 didn’t turn out to be quite as rugged as I thought it would be – it really didn’t like getting wet, which is something of an issue for a rugged device. I can only hope that my review sample was faulty, and I’ll be giving Sonim the chance to supply me with a second unit to find out. But in the meantime, if you need a phone that can take a real pounding ”and” a good dousing, I can’t really recommend the XP1.


”’Update:”’ After a couple of days drying out, it appears that the Sonim XP1 is now functioning perfectly. Nevertheless, a second unit is being shipped to TR for more testing, so watch this space for further updates.