What are the Sond Audio Bookshelf Speakers?

Funnily enough, Sond Audio’s Bookshelf Speakers are a pair of active bookshelf speakers with a built-in 180W amplifier, Bluetooth and a host of connections for your audio devices. They’re designed with music in mind, but the built-in amp makes them an affordable and convenient way of upgrading the sound from your TV or PC. They’re available exclusively from eBuyer.com.

There are some terrific powered speakers doing the rounds, such as the Q Acoustics Q-BT3 and Blue Aura X30, but Sond Audio’s effort is considerably cheaper, which could sway buyers on a tight budget. 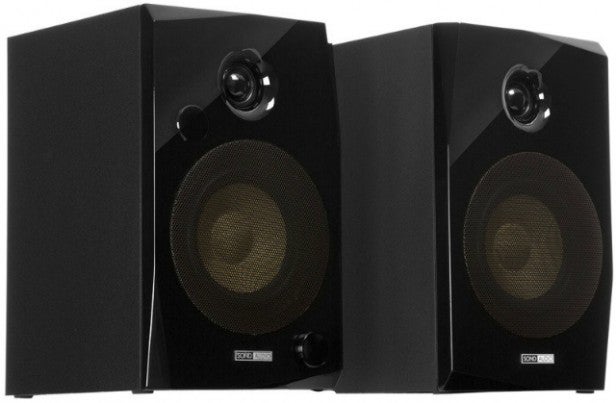 The speakers’ design is hardly cutting-edge and the materials have a budget whiff about them, but we think they’re rather attractive. The front is clad in an alluring gloss-black finish, with angled surfaces in the corners that break up the black box monotony. Black aluminium mesh covers the 5in woofers, above which are 1in tweeters sunk into a curvy moulded housing. 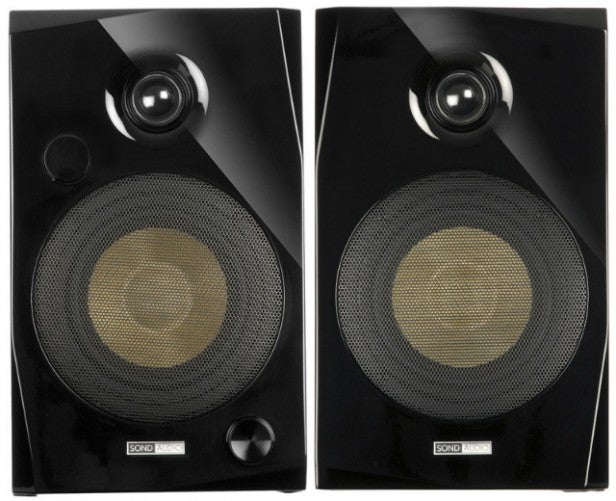 Their fairly bulky dimensions (295mm high by 180mm wide) mean you’ll need a decent amount of space to house them. We placed them on a pair of stands either side of our TV.

The right ‘master’ speaker houses the amplifier and connections and passes signals to the passive left over the supplied speaker cable – there are chunky plastic binding posts on the back of each speaker. As a result the right speaker sports a volume dial in the bottom right hand corner and two LEDs in a porthole that indicate power status and input.

The rest of the MDF cabinet is coated in a dappled PVC finish, the same stuff you find on cheap one-box cinema systems, but structurally they’re as solid as we’d expect for the money. 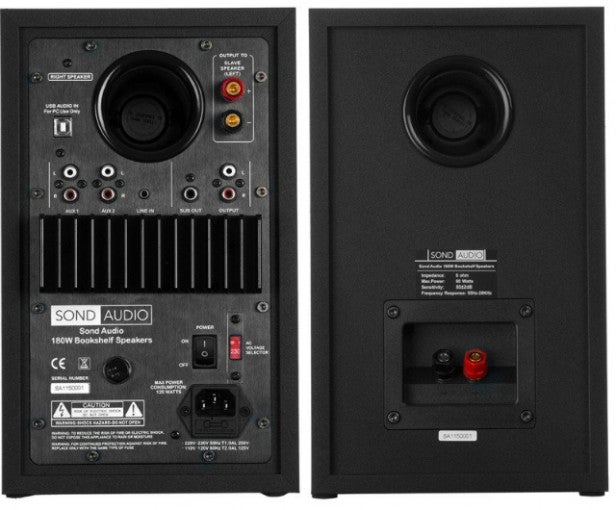 On the back of the right speaker you’ll discover a pleasing array of sockets. There are two pairs of analogue line inputs and one set of outputs, a 3.5mm mini jack input and an output for connecting an external powered subwoofer should your bass cravings not be satisfied. There’s also a type B USB input that lets you hook up a PC for music playback (the relevant cable is supplied).

For music most people will probably opt for the built-in Bluetooth connection, which helpfully remembers your devices once paired. The only real disappointment, socketry-wise, is the lack of an optical audio input for hooking up a TV. You’ll need to connect your set’s analogue outputs instead.

Both speakers employ a two-way crossover with a 5in woofer and 1in dome tweeter, while the Class AB amplifier is rated at 180W. 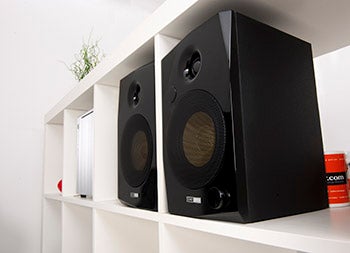 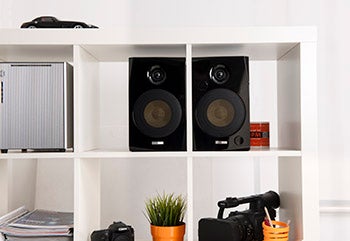 In the box is a useful accessory pack containing a Type A-to-B USB cable, an RCA-to-3.5mm mini jack cable and a good quality wire to link the two speakers.

The speakers use a rear-ported bass reflex system, which means they work best when placed at least 25cm from a rear wall. That way, bass is reinforced without the detrimental reflections that affect performance. But obviously a system such as this is designed to be plonked on a shelf or furniture, so placement is more likely to be dictated by space and room layout. 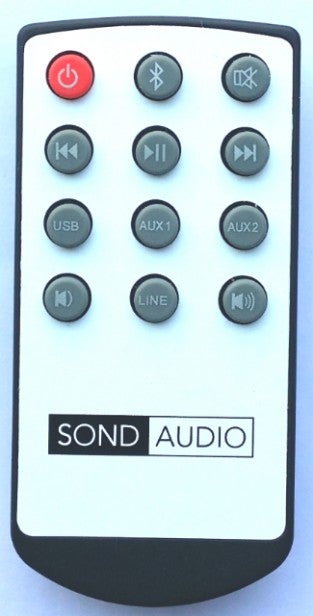 The supplied remote isn’t great, but it’s a step up from the usual blister-button travesties you get with most budget sound systems. This one features actual rubber buttons, neatly arranged in four rows of three. There are individual keys for each input, as well as volume and Bluetooth playback controls. The only problem is its dinky size, which might be ideal for the inhabitants of Lilliput but far too fiddly for a grown adult human.

Don’t be fooled by the budget styling and price tag – these bookshelf speakers deliver a terrific performance. Sure, audio big guns such as Q Acoustics or Monitor Audio don’t have anything to worry about, but Sond’s speakers offer levels of punch and clarity that we simply didn’t expect for the money.

Playing a range of music via Bluetooth and from an OPPO Blu-ray player connected to the analogue inputs, the speakers muster a punchy sound with lots of detail and a tone that doesn’t test the tolerance of your eardrums.

They display excellent rhythmic ability, keeping fast, energetic dance tunes in check with tight bass and snappy snares. But what’s most surprising is the Sond’s big soundstage. They easily fill a large living room with their loud volume and weighty low frequencies which render an external subwoofer unnecessary.

The groovy live bassline in The Way You Love by Incognito is thick but precise. Taut kick drums bounce and thump while warm Rhodes chords pan smoothly between channels, evoking a good sense of width. It’s topped off by crisp, powerful brass lines, natural vocals and crisp hi-hats.

Next we played X-Men: Days of Future Past and they display a similar aptitude for movie playback. As the Sentinels exterminate a group of X-Men at the start, the speakers deliver the robots’ ominous rumble and dramatic score with gusto, while the soundstage is peppered with detail, like tinkling ice and a delicate crunch the Sentinels crush their victims.

Great stuff, but they’re not perfect. High frequencies are crisp but could be treated with a little more finesse. Vocals and effects lack the texture and subtlety that separates good speakers from great ones.

And while powerful bass output is definitely the system’s forte, we found it occasionally overpowering with movies, particularly during X-Men’s boisterous action scenes. The balance and integration isn’t quite right, and there are no tone controls to rein it in. Moving the speakers further from the rear wall helped a little but didn’t solve it completely. 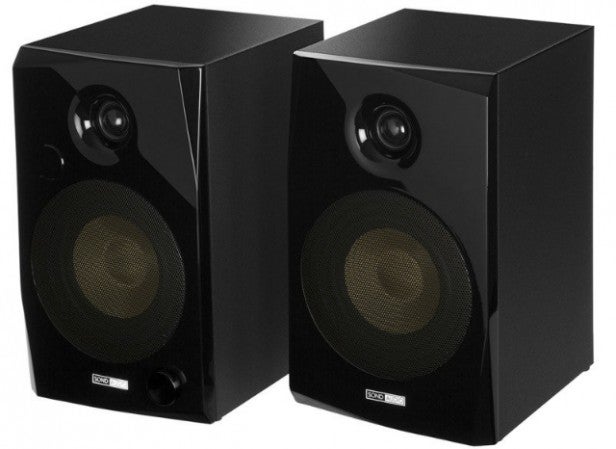 Should I buy the Sond Audio Bookshelf Speakers?

They may not be the last word in sound and build quality but Sond Audio’s sleek Bookshelf Speakers are still an impressive proposition for the money. They easily fill a room with their big, bassy and detailed sound, which makes them a viable TV speaker upgrade, and built-in Bluetooth is a bonus.

Occasionally wild bass with movies and a lack of finesse compared with the best powered speakers deny Sond Audio top marks, but if you’re shopping on a budget you’d do well to give them a whirl.

For the money this is a surprisingly capable sound system that effortlessly beefs up music and movies, although bass is too much at times and its design betrays the budget price tag.