Last week I looked at one of two interesting new products from Solwise, the purveyors of all things HomePlug. It was an IP camera that used HomePlug technology to transmit video data back to your network. I was impressed by the concept but under whelmed by its execution. Now I’m looking at another innovation from Solwise – will it manage to impress me more? 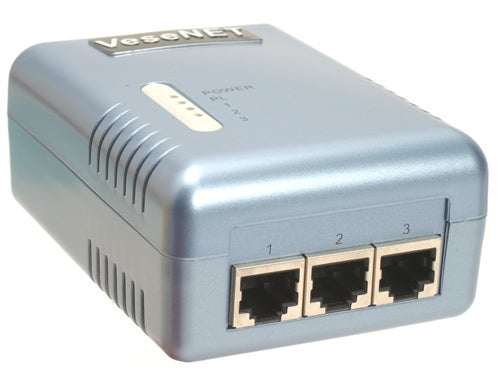 The Vesenet HomePlug 3 x Ethernet adapter is, as the name suggests, a HomePlug network adapter that incorporates three Ethernet ports, thus cutting out the need for an additional switch/router to distribute your network. I’ll talk in detail about the device itself shortly but for those of you that are unfamiliar with HomePlug, first a bit of background information.


HomePlug is the name given to one of the developing standards in power line communication, the technology that uses power cabling to transmit data. There are a number of different applications of power line communication including Broadband over Power Lines (BPL) which, rather than using telephone lines like DSL, uses you home’s mains electricity supply to connect you to the outside world. The HomePlug standard, however, is a much more localised version and is meant for use in expanding local networks throughout a single building without the need to resort to using Wi-Fi or laying new Ethernet cable.


It’s great technology but, if you were being picky you’d have to say that it has always had one problem. This is that if you want to connect two distinct clusters of computers you’ve only had two choices. You either, use a single plug at each location then attach routers or switches to distribute the signal, or, use multiple HomePlug adapters at each location. Neither solution is ideal as they both require extra plug sockets and space which in a normal home can be at a premium. This is where this new three way adapter comes in useful. You can simply plug one of these into a single plug socket, connect up to three devices, and, that’s it. No other networking or messing about required. At the other end of the power line connection you can choose to connect another 3 way device or just use a single adapter, depending on your needs. I’ve included a few diagrams to hopefully clear that up for you. 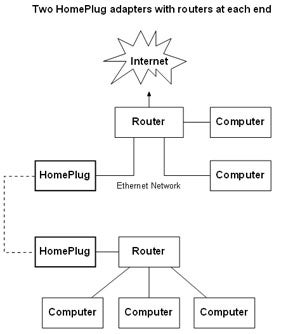 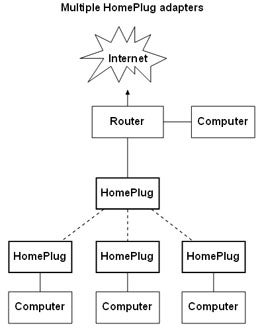 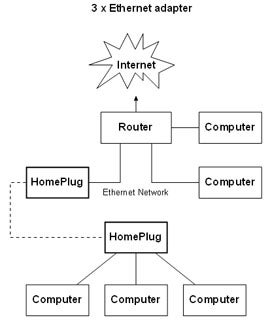 The device itself is, quite frankly, not much to look at. The metallic blue paint covers up a cheap plastic case that looks like it was designed back in the 80s, and the awful Vesenet logo doesn’t do the brand any favours either. How one can design a product to be so ugly in this day and age is quite beyond me. It is, however, perfectly strong enough to withstand the rigours of being chucked behind a computer desk or sofa.


Physically, the device is similar to its single port cousins with dimensions of 105mm x 44mm x 75mm. Along the bottom of the device are the three Ethernet ports, on the front are the status LEDs and on the back is a sticker that lists the device’s MAC address. The only thing of note is the use of a power lead rather than the usual incorporation of the plug into the device. This makes sense for several reasons not least of which is that the bulk of the device itself won’t now block other plug sockets.

To test the adapter I plugged a single Ethernet port HomePlug adapter into our router then attached the three port version to a computer and two notebooks – the two plugs were a few metres apart so the signal strength was pretty good. As our network uses DHCP, I didn’t need to configure anything and was able to start working on any of the three computers straight away. If you need to do further configuration, you will need to use the included software that will search for HomePlug devices on the network and enable you to configure them from there.


We’ve tested the throughput of the single 85Mbps HomePlug devices before in our reviews of the Solwise HomePlug Ethernet PL-85PE and the Devolo MicroLink dLAN Highspeed Starter Kit. As this device merely shares that bandwidth across three devices, I used a qualitative test to gauge the performance of the three port adapter, rather than using an overly elaborate quantitative test. This consisted of, quite simply, streaming a feed of high definition H.264 content to all three computers simultaneously. If it can cope with that, then it can cope with anything. 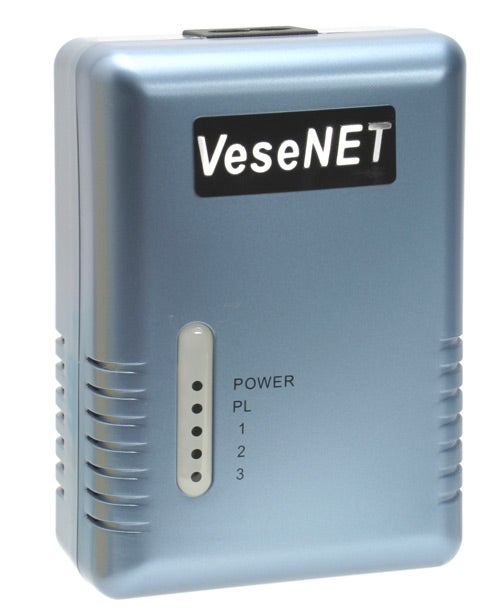 Thankfully I can confirm the kit passed with flying colours and I was able to watch three different HD streams at the same time. I confirmed there was enough bandwidth left over to surf the web with ease and move files back and forth from our networked folders without disrupting the video feed.


Sometimes when we review a product we find it’s hard to fit all the facts and figures into a single article without making it ten pages long and, conversely, sometimes there’s very little one can say about a product beyond “it works”. Well, the Vesenet HomePlug 3 x Ethernet adapter most definitely falls into the latter category. It might not look pretty, but if you think you might need one, then don’t hesitate to get one. After all, it’s only £8 more than the single port version, anyway.


It may look rather clunky but Vesenet’s 3-way HomePlug adaptor offers very good performance at a reasonable price, making this a practical and elegant way of extending your network to multiple clients from one plug socket. Recommended.