What is the Smeg SMF01 stand mixer?

Stand mixers tend to prize function over form, so Smeg’s SMF01 is a welcome development to anyone looking for an equal helping of both. Part of a new range of small appliances that includes toasters, kettles and a blender, the SMF01 is a masterclass in design. Its slender, graceful lines are twinned with glossy and matt finishes on the die-cast aluminium body (available in cream, black, red, pastel blue and silver) yet it’s more than mere eye candy. 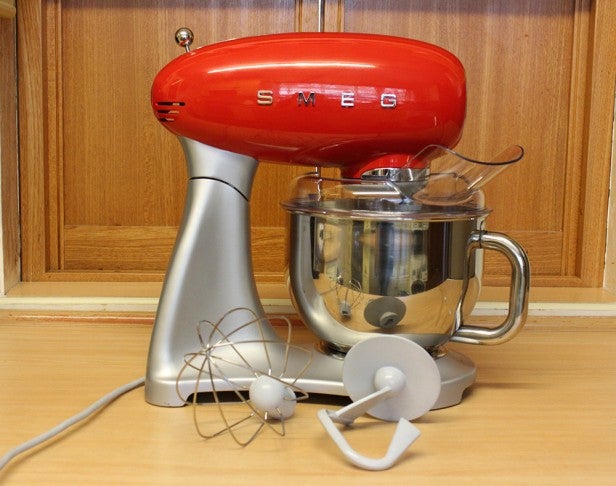 Beyond its exterior appeal, you’ll find features galore – three attachments, a 4.8-litre capacity bowl, 10 speeds, planetary mixing motion, anti-slip feet, and an outlet for optional extras, such as a pasta roller and cutter, spaghetti cutter and meat grinder, turning it into a versatile kitchen machine. 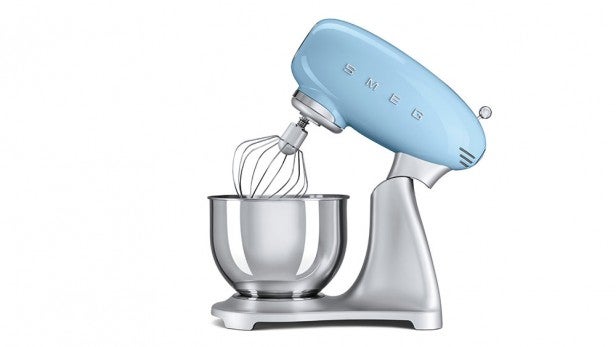 Perhaps the most enchanting thing about the SMF01 is that its design is a fresh start rather than an evolution of an existing model. There’s no practical need for its slim, smoothly curved base, retro-influenced mixing head or iconic 50s-style lettering – it’s simply to make this mixer a thing of beauty and the antithesis of boxy, workhorse equivalents. 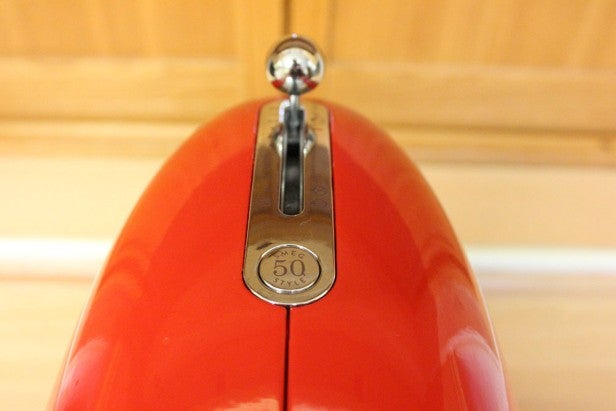 The same aesthetic also applies to its more functional features, from the gearstick-style knob that cycles through its speeds, to the front cover that twists off to reveal an outlet for optional attachments. A discreet button at the back allows the mixing head to lift up and lock into place, pressing again while slightly lifting the head to release. Don’t be deceived by the SMF01’s svelte lines, though – it still weighs a fairly typical 8kg. 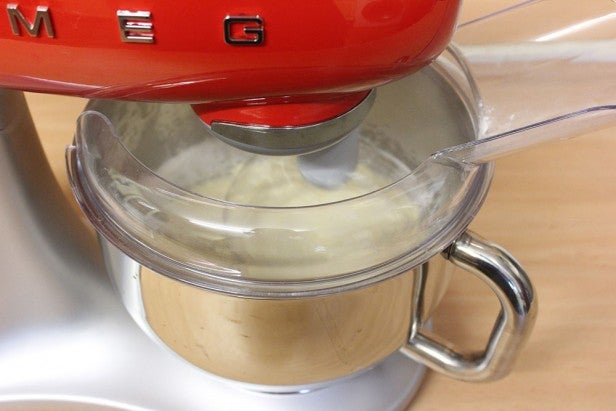 Its three attachments are standard in shape but still thoughtfully made with the dough hook and flat beater crafted from aluminium to match the machine and the wire whisk made from stainless steel to coordinate with the bowl. A ring-shaped pouring shield with a spout fits around the top of the mixing bowl, leaving enough room for the attachments to rotate, yet allowing ingredients to be added while they’re in motion. Ten speeds, ranging from kneading to fast whipping give good control and each has a ‘soft start’ to help prevent flour plumes and splashes. 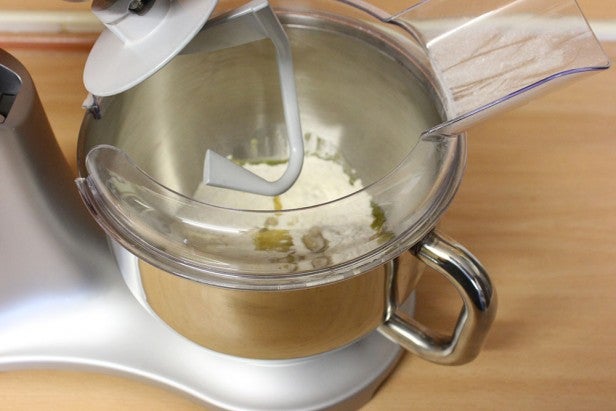 Smeg SMF01 stand mixer – What’s it like to use?

Putting the machine together is straightforward – the bowl twists and locks into place on the base, while the attachments fit with a push and twist action. A handy guide along the sliding speed control shows which attachments can be used with each level, recommending 1-3 for kneading with the dough hook and 1-10 for the whisk or beater. 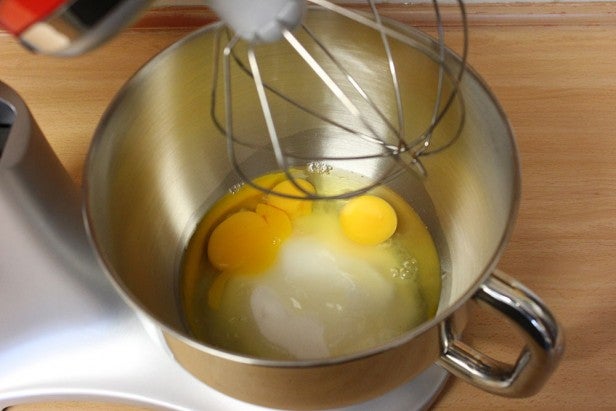 We started with the whisk, using it to make a basic sponge recipe, one of a few ideas that come with it. Placing eggs and sugar in the bowl, we whipped on speed 10 to beat them until they were light and fluffy. The planetary mixing motion is efficient, with only a few scrapes of the bowl required to make sure the ingredients were all combined. Even on the top speed, the machine was stable with no vibrations and took a matter of minutes to achieve the desired consistency.

Taking the speed down to 2, we used the spout of the pouring shield to add flour gradually. Although this produced a few puffs, by and large most of it was successfully incorporated with minimal mess. The resulting sponge had a light texture and a sweet, firm crust. 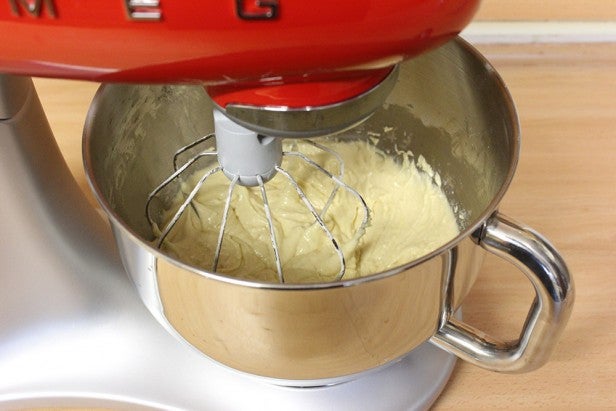 Next, we made pizza using the dough hook on speed 2. Despite using the recipe that was included with the SMF01, once the dough had started to come together, the machine’s motor started to strain at intervals, so a little more liquid had to be added to loosen the mixture. This solved the straining issue and the dough came together properly. Once finished, the dough was pliable and springy and easily worked into pizza bases. It rose well and cooked to a crisp, browned crust. 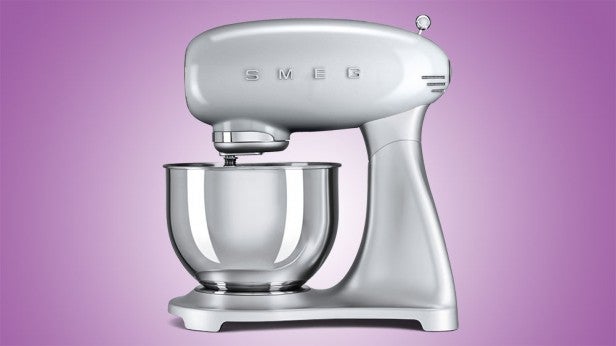 Should I buy the Smeg SMF01 stand mixer?

Up until now, retro-styled stand mixers have mainly been updated versions of past models so it’s good to see one that’s certain to be a future design classic on its own merit. Given that the SMF01 is finished in the same palette of colours as Smeg’s large appliances, it’s a must-have for existing fans of the brand, but it’s also sure to appeal to anyone looking for a design-led stand mixer but with a more modern aesthetic to the more established models. As far as functions go, it’s a solid, reliable performer but it helps to have some experience to know when it’s struggling, so perhaps isn’t a first-time buy.

A real showpiece of a stand mixer, the Smeg SMF01’s good looks and smart features come guaranteed but it’s reflected in the price tag.