Portability and personal choice are the buzz words of today with people pushing more and more for their technology to work anywhere and give them what they want when they want it. This is a trend that was typified by SlingMedia’s original SlingBox products. These boxes allowed you to grab the TV, or some other form of video, signal from your home and stream it across the Internet to wherever you were in the world. The software let you control your AV devices from afar, by using IR repeaters to emulate your remotes, keeping you in charge of what you wanted to view


Now there’s a new addition to the SlingMedia lineup, the SlingCatcher. This extends the SlingBox concept from just watching your streaming media on computer screens to viewing it on a conventional TV.


The way we see it, this has two main uses. First, you may have a second home of some description in another country where, let’s just say, the local TV isn’t quite to your taste. Having one of these little boxes plugged in enables you to remotely browse through your favourite TV channels from back home, start a movie playing on your DVD player, or set something playing on your Sky+ box, all from the other side of the world. 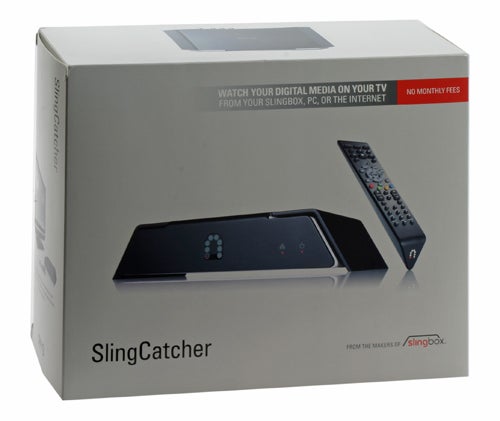 Alternatively it provides you with a way of extending the full functionality of the AV setup in your living room (i.e. TV tuner, Sky+, DVD player, PVR, Blu-ray player) to another room in your house without the need for extra Sky boxes, aerial connections, or players of any sort.


On top of the SlingBox ability, the SlingCatcher can also be used to stream video straight from your computer, and also play back video and audio files from USB devices. 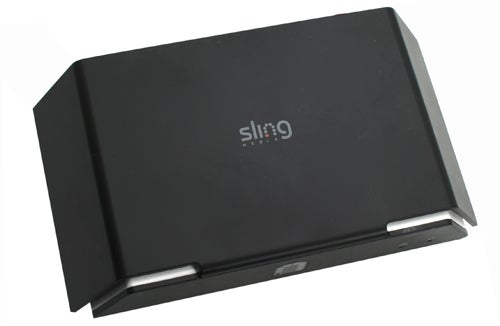 The box itself is suitably small with dimensions of 235 x 185 x 45mm so will tuck away out of sight quite easily. This being something you might want to do simply because the styling is definitely an acquired taste. At least is feels sturdy and well-made.


Unfortunately there’s one obvious reason why you won’t be able to hide it away completely, that being it uses an IR remote so the sensor on the front will need to be visible to the remote.

Being as this box will only ever find itself connected to one TV at a time, the selection of outputs on the back is entirely adequate – you get HDMI, component, S-Video, composite video, analogue audio and a coaxial SP/DIF. There’s also a converter in the box that will transpose composite video and analogue audio into SCART, should you have a TV that only supports the latter. Accompanying the various audio and video outputs are a couple of USB ports and of course an Ethernet connection. Wireless connectivity isn’t included so you will have to rely on either some sort of wireless-to-Ethernet bridge or a PowerLine or HomePlug networking device, which uses your electricity cables to create a network. SlingMedia has its own HomePlug based SlingLinks but any generic such device will do.

Setting everything up does take a while – especially if you’re simultaneously installing an accompanying SlingBox – but it’s all fairly intuitive and the instructions are clear and concise. The front is home to two red LEDs which indicate power and network connection while the lights in the inverted ”U” flash upon receiving a remote signal. You can’t turn them off, but they’re relatively unobtrusive. 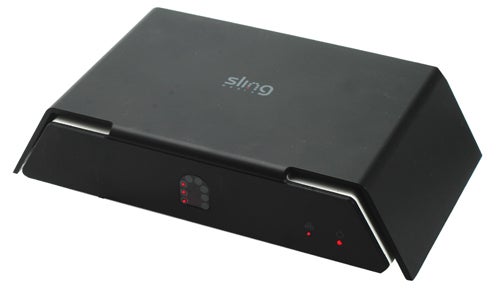 Once setup and logged into your SlingBox account, connecting to your SlingBox is a simple case of selecting it from the list of boxes associated with your account and entering the password. Using the remote you can now control all your AV devices as though they were right there in front of you.


Maximum resolution of streamed material is 640 x 480 and the theoretical bit-rate limit is 5Mbps, which is only about half that of a full DVD but, particularly when streaming over the Internet, you’ll likely be limited to far lower than this due to network speed. Indeed, when testing by streaming video from my home to the office (baring in mind I live pretty close) video clearly stuttered and started, as can be seen in our video review. Nevertheless, for casual viewing it is quite adequate and certainly if it’s a choice between watching the game in poor quality and not watching it at all then we know which we’d rather have. Perhaps the most regrettable aspect here, though, is that despite the SlingCatcher having HD outputs, and the SlingBox Pro HD having HD inputs, the latter can’t stream HD material to the former.

Moving onto the second, rather less bandwidth limited ability of the SlingCatcher we tried streaming some video straight from a laptop across our local network. To do this, SlingMedia provides a program it calls SlingProjector. Once you’ve installed it and entered your login details you simply select the window you’d like the software to start streaming from and away it goes.


The software is pretty clever and enables you to select either a whole window – say the whole of your web browser – or just the video window of whatever it is you’re watching, i.e. the youtube window within a web browser. Video quality using this local streaming method was much better and we would happily watch a full action movie like this.


The final piece to the SlingCatcher’s puzzle is its USB playback. Here we see it take full advantage of its HD outputs allowing up to 1080i video to be played back. Video quality is really only limited by the quality of the HD video clip you’re watching and, of course, that of your TV. File format and codec support is also very good though there were some occasions where it didn’t work. For instance, most of our h.264 encoded .mov trailers that are either 720p or 1080p didn’t work, despite the SlingCatcher proclaiming to support both h.264 and mov. Mkv files also failed to play, which may upset certain users. 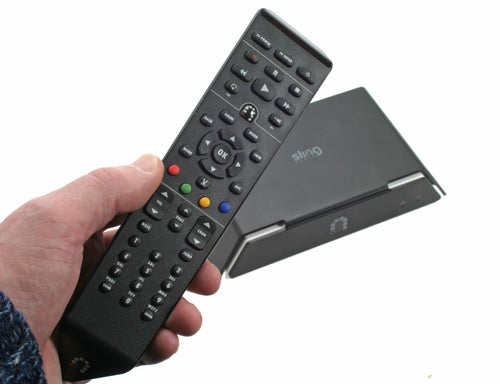 For those files that don’t play, SlingMedia provides a conversion tool (also branded under the Sling name as SlingSync) that makes the process of converting them into playable formats very easy. It will scan either, an entire hard drive, a folder, or a USB device for multimedia files then list them along with either a green, yellow, or red bullet point next to them. Green files will play without conversion, yellow files can be converted, and red ones can’t be converted (generally because they’re protected by DRM). Conversion is automatic and relatively speedy but unfortunately doesn’t support graphics card acceleration so still takes some time. We had no problems converting all our non-DRMd files, though, and so would be quite happy to use this as a regular media file player.


All told, though, especially when you consider its £180 asking price, the SlingCatcher’s USB video playback and local streaming functions are only ever going to be value add features to its main use of catching your TV signal – quite simply, there are more fully featured and cheaper alternatives in these fields. As such, it’s only ever going to have limited appeal.


On top of this, we feel that even those people that do use and like the SlingBox service would be better off putting their £180 towards a nice laptop upon which to view their media. Nevertheless, despite these reservations, if you really would rather watch your media on a TV then the SlingCatcher works very well, is easy to use, and the price seems fair considering all the extra functionality.


The SlingMedia SlingCatcher will only ever have limited appeal but for those that really ”need” such a device it does just about everything you could hope for and what few minor complaints we have shouldn’t be enough to put you off buying one. However, the limited video quality of the SlingBox experience combined with the fact most of us have laptops that we can use to watch our SlingBox content make it a less compelling proposition.