The music industry has experienced massive upheaval since it went digital back in the Eighties. First the Compact Disc with its scratch-free playback and handy form factor quickly took mass market away from vinyl.


We’re now in the throes of another great shift in the way we experience music, with compressed music formats and music downloads – as popularised by Apple’s ubiquitous iPod and iTunes – moving the source of playback away from discrete media such as CD to whatever storage media is available. 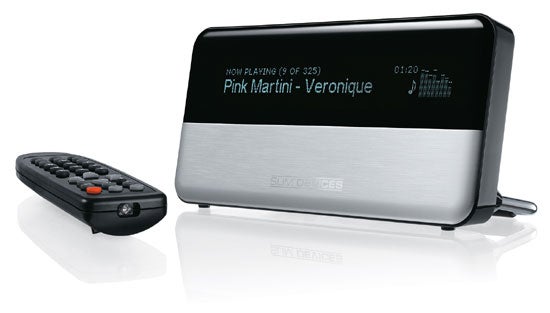 Technology companies and, belatedly, audio firms are beginning to realise the potential of such a shift not only for portable audio, but also for music in the home. And it’s in the arena of wireless multi-room music systems that we’re seeing the most development. We’ve already two quite different products this year from Philips and Sonos and were particularly impressed with the latter. The trouble is neither is particularly cheap.


Enter Slim Devices’ Squeezebox, which offers another solution to the wireless music problem, but manages to do so at a comparatively bargain price. This unassuming piece of equipment, available at just £220, costs under a third of a basic Sonos system yet it does a very similar job. 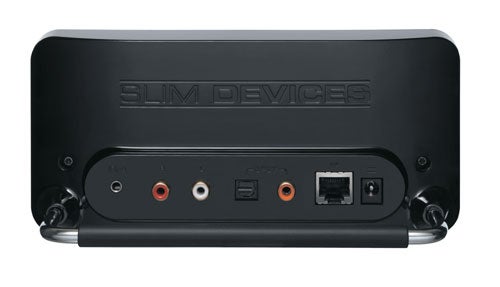 If you’ve struggled to get wireless kit working before, you’ll be glad to hear that the Squeezebox is a dream to install. Once the SlimServer software is installed on your main music PC, running through the network setup wizard on the device itself is a doddle – you’ll be streaming your digital music files to your existing hi-fi setup in a matter of minutes. The Squeezebox supports WEP and WPA security encryption too, so you’ll have no worries about the neighbours crashing in on your wireless music-driven party and putting on music you’d thought you’d long since resigned to the bottom of the CD rack.

Where the Squeezebox differs from the Sonos system (other than the cost) is that it doesn’t operate on its own wireless mesh network – it simply integrates with your existing setup – and it also requires you to have your PC running all the time, where the Sonos system can stream music from a NAS (network attached storage) box with your PC turned off. The remote isn’t as fancy either – it’s a black plastic puck with rubber keys; no iPod-style clickwheel or colour screen here. 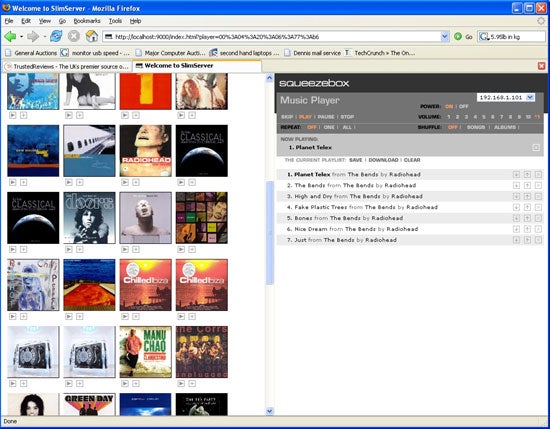 Aside from that, this is one clever little box. First impressions are good. It’s about the size of a VHS cassette, comes in a rather fetching two-tone brushed aluminium and gloss black finish, and its screen – a bright and highly readable dot matrix LED-style display – makes it an attractive addition to any hi-fi rack (or kitchen worktop if you’re so inclined). It feels reasonably well-built as well.


That el-cheapo remote control actually works really well, and browsing through your music collection is a breeze thanks to the bright screen. The usual organisational options are present here: you can browse by album, artist, folder and track name and so on. What’s really handy, however, is that you can quick-skip through long lists by initial letter; the remote’s alphanumeric number pad acts like the keys on a mobile phone when texting. You can search by album, artist and track in a similar way. 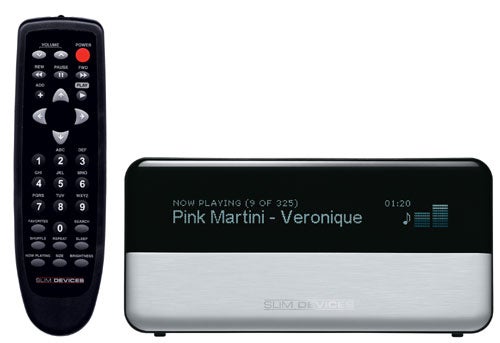 There are more ingenious features to be unearthed too. Even if you don’t like the remote control, there is an alternative. Because the SlimServer software runs as a web server on the host PC, all you need is a wireless device with a web browser installed on it (a PDA or laptop for instance) and you’ll be able to access a more fully functional and attractive control interface. Just open up you browser, tap in the IP address of the host PC and open it up on port 9000 and you can browse your music library, build playlists, change settings and so on.

The SlimServer software also allows you to stream music directly to software media players such as Windows Media Player. That means you can stream tracks from your music collection PC to other machines on your network without having to buy another Squeezebox. It also means (if you have a static IP address) that you can access your music from a Wi-Fi connected laptop on the train to work, or a PC in a friend’s house. 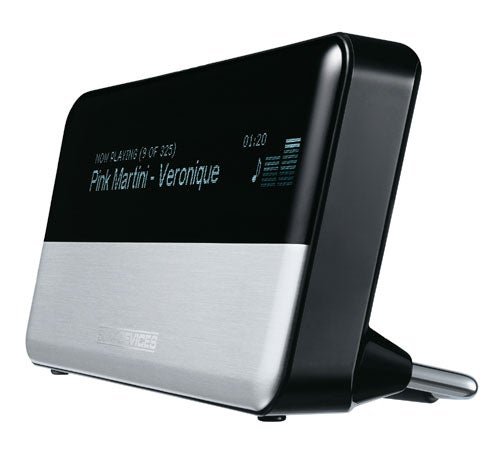 And there’s more. Not only is the Squeezebox a well-featured music player, it can also be configured to act simultaneously as a wireless bridge. This means that you can use it to connect devices to your wireless network that would normally require a wired connection (your Xbox or PS2 for example). And along with streaming your music collection, there is of course, a collection of thousands upon thousands of Internet radio stations to tune into. You can also pick from a selection of RSS feeds and see news headlines scroll across the display if you want.


Despite the relatively cheap price SlimDevices hasn’t skimped on the connections, and around the back of the device you’ll find an impressive array of inputs and outputs. For simple systems, there’s a pair of RCA stereo phono outputs and a 3.5mm headphone jack. Sound quality using these is pretty impressive. The Squeezebox has a Burr-Brown 24-bit DAC inside to help things along – a DAC found in many mid-range dedicated CD players. It sounded a bit on the flat side, even when compared to my £200 Denon DVD player, but for most people there’s more than enough punch, rhythm and imaging on offer. 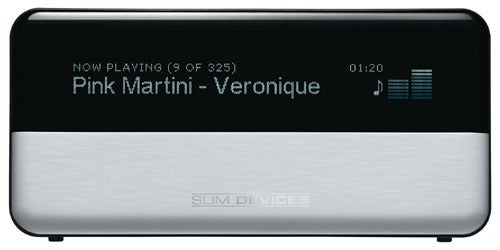 It comes into its own, however, when you use the digital outputs. The Squeezbox offers both Toslink optical and coaxial digital S/PDIF outputs and these can be plumbed directly into any surround sound home theatre system with digital inputs, or preferably a dedicated stereo DAC (digital to analogue converter). Coupled with lossless audio formats, the latter connection is capable of creating superb sound, only limited by how much you want to spend on your DAC circuitry.


And boy does this thing support a wide array of music formats. Not only does the Squeezebox support the usual lossy formats – MP3, WMA, AAC and Ogg Vorbis – but it also support a wide range of lossless file formats, including raw PCM, AIFF, WAV, FLAC, and both Apple and WMA lossless standards.


It won’t be for everyone, but with the Squeezebox Slim Devices has most of the wireless music bases covered. Not only is it good to listen to with the right kit, it is also very easy to use and has a myriad of ingenious features.


Sure it can’t quite match the elegance of design, engineering and sheer desirability of a Sonos system but Slim Devices’ little Squeezebox is a masterpiece of innovation and well worth the money.