What is the Sky HD 2TB receiver?

The annual Christmas pressure is once again up on us. Not the whole buying presents/catching up with family thing; that’s easy. No, we’re talking about that horrible gnawing feeling in the pit of your stomach telling you there’s no way in hell you’ve got nearly enough spare room on your Sky box for recording all that top Christmas telly you’re going to miss while you’re hitting the Sherry with Aunt Gemima.

This year, though, it could all be different. For if you set yourself up with one of Sky’s new Sky HD 2TB receivers you could download full HD boxsets of Game of Thrones, The Wire and Mad Men for seeing you through all of winter’s long, dark nights while still having bags of room for recording every Morecambe and Wise Christmas Special ever made and It’s A Wonderful Life 10 times (just because you can).

Getting up a bit closer to the new Sky HD 2TB box, though, leads to the rather important discovery of a WPS button and a little LED that shows whether you’re on Wi-Fi or not.

Yes, you read that right: the latest Sky HD 2TB receiver (and Sky’s new standard Sky HD receiver actually) supports Wi-Fi. This is an enormously welcome and long over-due addition to the spec of Sky’s receivers, finally acknowledging that it’s not always at all easy for people to hard wire their Sky box into their broadband network. We could imagine this being to some people as attractive a reason for upgrading from their existing Sky receiver as the 2TB box’s extra storage capacity.

The addition of Wi-Fi is especially important these days because on-demand content is now such a key part of Sky’s content offering. We’ll come back to this presently, but first we should run through the Sky HD 2TB’s other connections: namely an HDMI, two LNB inputs, an aerial loopthrough system, both optical and coaxial digital audio outputs, and an Ethernet port should you prefer the hardwired approach to using the new Wi-Fi.

It’s worth adding that mercifully if you add the Sky HD 2TB to your network you no longer have to have your box connected to a phone line to avoid breaching your Sky contract T&Cs. The Box Office purchase info your phone line was required for before can now be handled through the internet.

Intriguingly, the Sky HD 2TB also sports two USB ports, raising hopes that Sky has finally embraced the content sharing revolution and allowed you to play back multimedia files through its receivers. Unfortunately, though, the USBs do nothing at all at the time of writing. And before you ask, no, Sky HD 2TB receivers do not support DLNA file transfer.

We frequently find there are more than two programs showing at once that we want to be able to watch or record on the Sky platform (and these instances are bound to rise over Christmas), so another slightly disappointing thing about the Sky HD 2TB box is its provision of the same twin-tuner arrangement found on Sky’s normal HD receivers. We’d have loved four. But there you go; maybe next time.

A fairly recent firmware update does mean, though, that the Sky HD 2TB’s HDMI output supports 5.1-channel digital audio, removing the need for using a separate digital audio cable to your AV receiver if you want to enjoy Dolby Digital multi-channel audio. This may sound like a small point, but home cinema fans will consider it’s appearance as welcome – and as long overdue – as the integrated Wi-Fi. 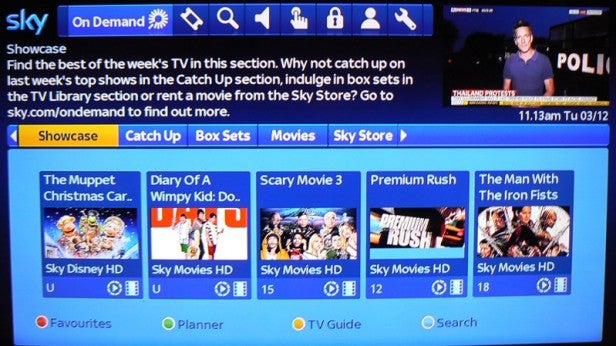 Turning to the whole raison d’etre of the Sky HD 2TB box, its enormous recording capacity, it transpires that actually only 1.5GB of the unit’s full 2TB capacity is available for your own recordings. The other 500GB is reserved for ‘pushed’ content; shows the box records automatically at Sky’s behest in the hope you might fancy watching them at some point.

We’re struggling to think of a single time we’ve ever watched any of this pushed content, however, so it’s disappointing that a quarter of your recording capacity is given over to it. Maybe one day Sky will be able to integrate some sort of learning functionality so that the pushed content can be more consistently relevant to your viewing habits. As it stands, though, the On Demand section just feels like 500GB of wasted space, to be honest.

Still, before we get too churlish about this, 1.5TB of available space for our own recordings is hardly small beer. It thrashes the poop out of the 160GB or 250GB or personal storage available in standard Sky HD receivers, and is reckoned to provide enough space to store up to 350 hours of HD or a staggering 1180 hours of standard definition.

Not that you’ll probably often want to be recording anything in standard definition. A massive attraction of Sky’s platform to AV enthusiasts is the number of HD channels it carries: 67 at the time of writing. This compares with just 10 on Freeview and 6 on Freesat. Even Virgin only carries 22.

We’d increasingly argue, too, that the remarkable volume of downloadable on-demand content Sky now offers as part of its subscription fees is almost on a par with the extent of its HD coverage in terms of making the service feel worth its money. And the on-demand content we’re talking about here is not that ‘pushed’ stuff we mentioned earlier. This is true on-demand catchup TV, combining a huge mix of recently aired TV shows – some in full boxset versions – and movies at no extra cost if the programming falls within your subscription package.

You’ll note that the catch up stuff is not limited to just Sky’s own or ‘premium’ channels; having all the big four UK free to air broadcasters supported as well is a real crowd pleaser.

The interface for Sky’s catch-up section is attractively presented too, with plenty of HD-resolution graphics to draw you in. The only catch is that using graphics so heavily while only using around the bottom third of the available screen space for the catch-up TV menus means that other content beyond what Sky chooses to highlight can be a bit hard to track down, with many shows being relegated to a place in a long alphabetical text-only list.

You can do text searches for stuff, and where multiple episodes of something are available these episodes are all stored together in a ‘folder’. But it still feels more of a struggle to find less mainstream on-demand content than it ideally would.

The same slightly mixed situation applies to Sky’s electronic programme guide. While while Sky’s EPG is brilliantly presented as a browsing system and has pretty much laid the groundwork for all other EPGs that have followed it, tracking down specific desired content isn’t especially intuitive, even once you’re familiar with the search tool’s fiddly text input system.

One other issue with Sky’s interface that isn’t addressed by the latest 2TB box is the lack of a backwards EPG (where you can scroll back through previous days of programming to find catch-up content). Such systems are used very effectively by Virgin, YouView and Freesat on some of their current receivers, and if Sky could manage to integrate some variation of this system into its EPG at some point, we suspect it would instantly solve some of the on demand content-finding issues noted earlier.

While there are areas where Sky could potentially improve its interface, though, it’s important to stress that the niggles are ultimately left looking pretty minor when considered against the fluidity of the EPG as a programme browser, not to mention the colossal benefits subscribers get from the fact that as well as carrying an unprecedented number of channels (including tons of HD), Sky’s support of on-demand content is miles ahead of the rest.

Exploring the Sky HD 2TB box to its fullest also reminds us that these days Sky’s support for portable devices is outstanding, in terms of both the multi-screen viewing experience provided by its Sky Go service and the browsing features supported by the Sky app.

Sky Go now lets Sky subscribers stream (some live, some on-demand) 54 channels on iOS and Android devices, with a £5 a month Sky Go Extra service additionally letting you download content rather than just streaming it. The Sky app, meanwhile, does a very handy job of getting round the content finding issues experienced with the Sky HD 2TB’s on-screen menus. For instance, you can search through all the listings brilliantly quickly and smoothly with mere swipes of your finger on the Sky App EPG, and have the app automatically select the right channel on the Sky receiver when you press on a programme you want to watch.

Also, of course, it’s much easier to undertake text searches of the available programming when you can input text via your smart device’s touch screen keyboard rather than having to repeatedly press the main remote’s numerical keys to select different letters.

Sky still shows a slight bias towards iOS users with its Sky app – and with some of its other apps, come to that. But thankfully the difference in functionality level between the two platforms is far less pronounced now than it used to be, and Sky has publicly pledged to work hard to ultimately deliver as much cross-platform parity as it can. 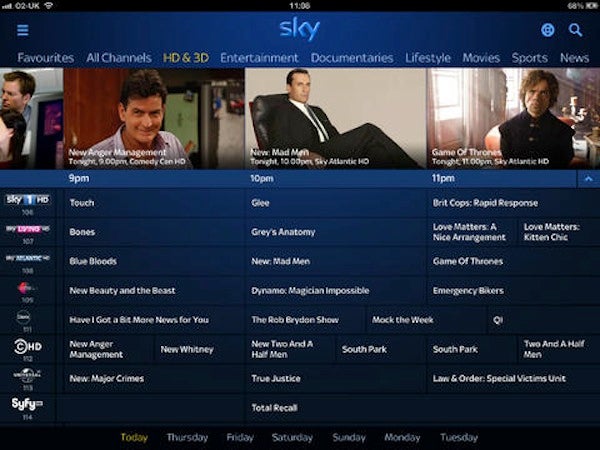 The last point to consider in this section is pricing – and actually this is pretty complicated.

There’s not much to say here really, as in the vast majority of cases your receiver will be installed for you by a Sky engineer. Which is just as well really, as the install process hasn’t really been designed with the end user in mind.

However, if a Sky engineer calls round to do the install for you, it’s going to cost you between £30 and £60. So it’s handy that Sky will let you do the installation by yourself for free if you feel up to it, and even provides an instructions page to help you out. That page can be found here.