Back in March we lapped up SIM2’s truly stellar Grand Cinema C3X Lumis three-chip DLP projector – arguably the single most enjoyable home cinema experience we’ve ever had. There was just one problem: if we even dreamed of owning one, we’d have to wake up and apologise to our bank managers.


For the single most unavoidable fact about the C3X Lumis was that it cost only a fiver under £26,000. That’s 26 thousand pounds, in case you thought we’d made a typo.


We’re not saying the C3X Lumis wasn’t worth its money, mind you. It’s so often the case that if you want the very best, you have to pay for it. It just causes us physical pain to know that unless we pack up a review unit we’ve got on loan, move home and change our names, phone numbers and locks, we’ll most likely never get a C3X Lumis permanently installed in our lives. Grr.

Cue – er, sort of – the C3X Lumis Uno. For with this new projection beast, SIM2 has managed to knock a whole seven grand off the C3X Lumis asking price.


This obviously still leaves it sitting pretty at £19k, so it can hardly be considered mainstream. But if you are lucky enough to be able to afford it, then the C3X Lumis Uno could well be a seriously tempting alternative way of emptying your bank account.


Obviously the main order of business with this review has to be tracking down what SIM2 has changed to knock £7k off the price of the original C3X Lumis. And happily, we can immediately report that none of the cost cutting appears to have taken place on an aesthetic level. For the C3X Lumis Uno is every bit as gorgeous to look at as its costlier sibling, thanks to its glossy finish, wonderful Ferrari-like sculpting and surprisingly petite size considering what a brutish amount of home cinema goodness it’s got crammed inside. 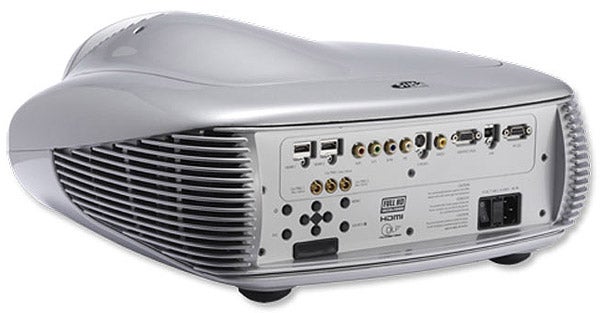 Connections are the same as those of the more expensive model too, meaning you get two v1.3 HDMIs, three 12V trigger ports, a D-Sub PC port, RS-232 and USB control jacks in recognition of this projector’s custom install focus, a component video input, plus, finally, composite and S-Video inputs for anyone who can bear to use a projector of this status with standard definition material.


It’s when we delve deeper into the Uno’s specifications that we finally get to the £7k-saving nitty gritty. For while the C3X Lumis quotes a storming DLP contrast ratio of 35,000:1, this figure drops rather dramatically to 9,000:1 with the Uno.


Before contrast lovers wring their hands in anguish, though, the situation with these contrast ratio differences might not be as clear cut as it first appears. For the main reason for the differences comes from the Uno not having the dynamic or manual iris adjustments sported by the original Lumis. Not being able to manipulate the projector’s light output ‘on the hoof’ with a dynamic iris will always severely dint a projector’s measured contrast ratio. But what’s really significant is a projector’s native (as in, with no dynamic contrast features) contrast ratio, and in this respect we suspect the Uno might not be nearly as drastically different in contrast terms to its full Lumis brother as the on-paper figures might suggest.

In fact, we’re so confident in our suspicions that our biggest beef with the removal of an adjustable iris from the Uno isn’t that it has heavily dented picture quality but rather that it has taken away a potentially handy brightness fine-tuning installation tool for custom installers.


One final relatively minor difference between the C3X Lumis Uno and the original Lumis can be seen in their brightness figures, with the Uno clocking a maximum output of 2,600 Lumens from its 280W lamp while the ‘full’ Lumis hits the magic 3,000 Lumens.


Next we come to things the Uno still has that the original Lumis does too. And happily, this list is still hugely impressive.


For starters, the Uno features exactly the same awesome colour calibration toolset, whereby you – or rather, your installer – can hook the projector up to a PC, boot up a LiveColour calibration package, and basically tweak the living crap out of the colour palette until it’s as near perfection as you’re likely to find outside a professional digital cinema installation. We honestly suggest you watch your installer at work when he gets to this stage, as it’s both a revelation and an education to see just what the colour management tools are capable of. 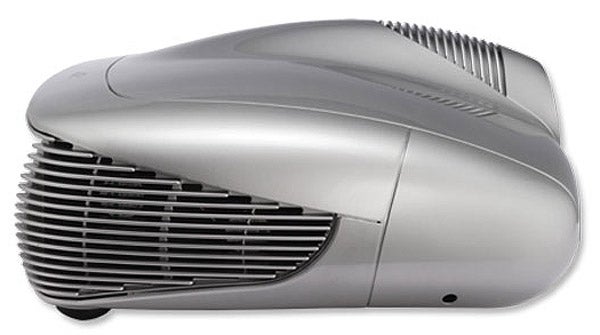 
It’s also a big relief to note that the Uno holds on to the really useful facility for adjusting the output of the lamp. A number of different output levels are provided, giving you at least a degree of control over the projector’s light output, despite the lack of any separate iris controls for more fine-tuning.


Since it’s the aspect of the Uno that’s causing us the most alarm based on the projector’s relatively low contrast ratio claim, let’s start by assessing how deep its black colours get, and how dynamic its images are when showing a mixture of light and dark content.


The answer in both cases is ‘very’! Dark scenes look superb, especially if you go for one of the lower lamp output options, thanks to the way totally convincing black colours underpin everything while betraying barely a trace of low-contrast greyness. The fact that this is a three-chip DLP projector also means that there’s no significant trouble from the greenish dot crawl noise over dark picture areas always present to some extent with single-chip models.


The clearly impressive native black level response of the Uno means it can reproduce the light parts of predominantly dark images with excellent punch and brightness, giving images the outstanding dynamism noted before. In fact, it’s the ability of the Uno to combine its vast 2,600 Lumens output potential with such a superb native black level response that predominantly explains why it costs £19,000.

There’s consistently a little less vibrancy and dynamism than you get with the original Lumis, and also a fraction less shadow detail reproduction. But this says much more about the awesomeness of that projector than suggesting any real weakness in the Uno.


Since the Uno doesn’t have a dynamic iris, there’s no potential for the sort of distracting brightness ‘jumping’ that dynamic irises can cause. Though to be honest, we didn’t really see any evidence of this on the original Lumis either!


While the extreme dynamism of the Uno’s pictures might be the most instantly obvious stamp of its premium nature, it is the colour response of its pictures that you grow to love over the longer term. The combination of vibrancy and delicacy portrayed with a good Blu-ray is really quite exquisite – well beyond the abilities of the mainstream market. 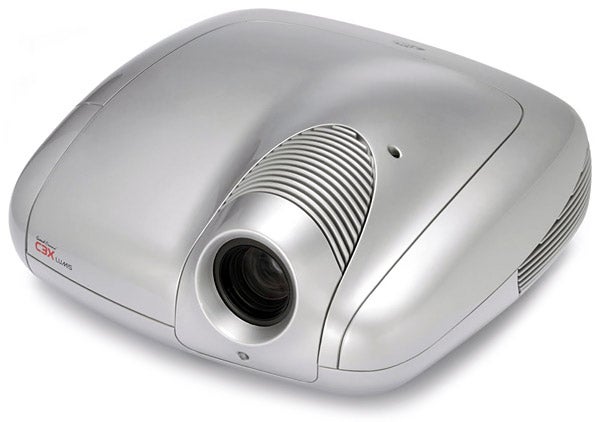 So wrapped up will you be in the strengths already noted that it might take you a while to focus in on yet another good picture quality point: the Uno’s terrific sharpness. It reproduces every last nuance of a good HD signal with effortless accuracy, yet never pushes sharpness so hard that the picture starts to look noisy or ‘digital’.


Motion looks completely natural too; fluid enough not to distract you with judder, yet not so fluid that it starts to look forced and processed. And it’s great to see the three-chip DLP engine rendering motion and camera pans with no sign at all of the fizzing noise seen with single-chip DLP models.


The three-chip configuration also naturally precludes the Uno from another dreaded phenomenon of single-chip DLP models: the rainbow effect, where stripes of red, green and blue appear over very high-contrast parts of the picture, or in your peripheral vision.


Aside from the minor and entirely understandable picture step-downs from the all-conquering original Lumis, the only ‘complaint’ (if you can really call it that) we might raise about the Uno is that it runs a touch noisily, especially using the top lamp output setting. But it’s not shockingly bad by any means for such a barnstormingly bright projector, and in any case the noise should be something a good installer should be able to sort out with a bit of thought/effort.


The C3X Lumis Uno is another triumphant projector from SIM2. We had our concerns that compromising the Lumis in any way might be a mistake, and feared what the removal of iris controls might do to the Uno’s flexibility and performance. But actually the Uno remains impressively flexible when it comes to perfecting your home cinema experience, and most important of all, it’s still a truly fearsome performer.


Sure, it’s not quite as good as the more expensive original Lumis, and however much we try to cook our accounts, we still can’t get close to being able to afford one ourselves.


Still, while it might not be cheap enough for us to afford personally, the Uno will undoubtedly open the SIM2 projector door to a potentially healthy number of well-heeled punters for whom the original Lumis’ £26,000 price tag is just a step too high. And any projector that spreads the gospel of awesome big-screen home entertainment is just fine by us. 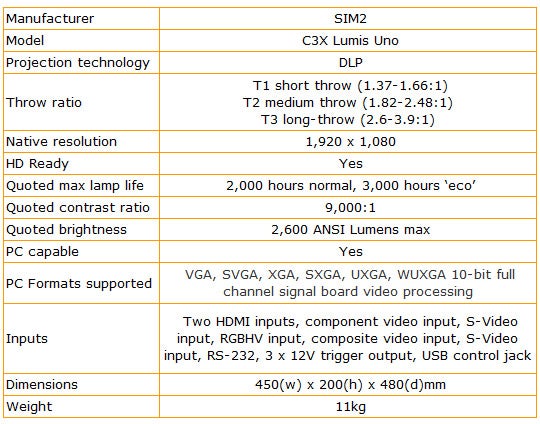