Choosing a CPU cooler might not seem like an arduous task but actually can be surprisingly difficult, depending on what you’re looking for. If you’ve bought a retail CPU it would have come with a cooler recommended by the manufacturer and this should work without issue within the specified temperature range of the processor it was supplied with. The problem with most of these coolers is that they tend to produce quite a lot of noise and even though they do the job, they’re rarely all that good.


Of course, for those that want to overclock their processor, a stock cooler won’t be much use. On the other hand there’s also a lot of people who are more interested in something that operates quietly and the SilverStone NT01 is targeted at this audience. The NT01 is only available for Socket-478 processors, but SilverStone told me that it is working on new models for other CPU sockets.


Out of the box, the NT01 looks nothing like your traditional cooler. It has a copper plate that fits inside the cradle on a Socket-478 board to which three copper heatpipes are attached. The other end of the heatpipes are covered by a large copper heatsink that dissipates the heat from the heatpipes into the air. Due to the construction of the cooler, it won’t work as efficiently with some motherboard and case combinations as others and SilverStone has a list of suitable motherboard on its web site. 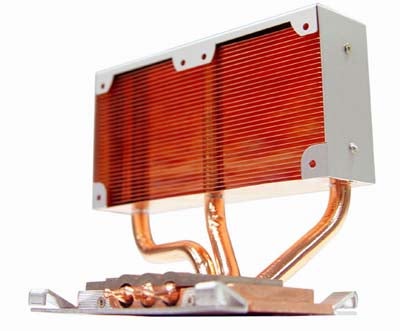 Let’s take a closer look at the NT01 first as it has a few more unique selling points. Normally heatpipes on CPU coolers are filled with a liquid of some sort, but SilverStone is using sintered powder heatpipes, something I have not seen before. The heatpipes are also much thicker than normal, which should provide for better thermal conductivity. The heatsink at the top end of the cooler is made up of very thin vertical copper fins, which should draw the hot air away from the heatpipes in an effective manner, especially as all of the fins are soldered on to the heapipes for improved contact between the two.


The copper fins are covered by an aluminium shroud that can accommodate two 60mm or one 70mm fan for additional cooling. It all looks very stylish and if you want a CPU cooler that looks good, this might just be what you’ve been looking for.


Assuming your motherboard is supported, there are three different ways of mounting the NT01. Again SilverStone has a very good representation of this on its web site, but to put it in a simple way, if the mounting cradle for your CPU cooler enables you to face the heatsink of the NT01 towards the rear fan(s) of your case, this is the ideal solution as this means that you shouldn’t have to use any extra fans.


On the other hand, if the cooler cradle forces you to face the heatsink upwards and you have a PSU with a bottom mounted fan, this should also enable you to run the NT01 fanless. The third and final way to mount it would be facing inwards over the motherboard, but SilverStone doesn’t recommend this unless you fit additional cooling to the NT01.

The NT01 is supplied with two retention clips as well as a small syringe with thermal grease, although this is standard silicon grease rather than some fancy silver based solution. There’s also a small installation pamphlet that shows you how to install the cooler.


So how well did it perform? Well, first of all I slapped it in to our standard test bed which has a 3.2GHz Socket-478 Prescott core Pentium 4 processor and an MSI 865 Neo2 motherboard. No extra cooler was fitted at the first attempt and the CPU reached 60 degrees Celsius at idle and hit over 90 degrees Celsius with CPU Burn running. This resulted in the system shutting down due to the high temperature. To be fair to SilverStone, the case our test bed is fitted in only has a single 80mm fan at the rear, which isn’t going to be good enough to run the NT01 passively cooled with this type of processor. 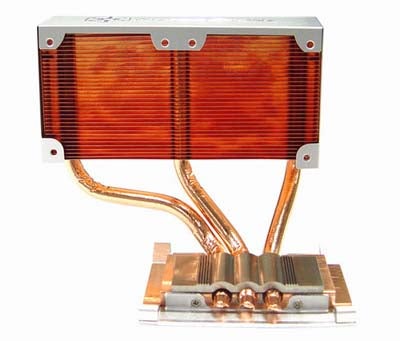 After this first attempt, I decided to fit a single slim line 70mm fan to the NT01. This turned out to be slightly misaligned as you have to fit it offset by using a screw hole from the second 60mm mount, which means that it doesn’t cool the whole heatsink. Fitting this did wonders for the CPU temperature, which never peaked over 50 degrees Celsius at idle – much more in line with what you would expect from a decent CPU cooler. It might not be as good as some high-end coolers, but it produces a lot less noise even with the fan attached. Running CPU Burn brought the temperature up to 60 degrees but it held steady there, which shows what a huge difference adding a fan to the NT01 makes.


SilverStone recommends the NT01 to be used with its own TJ06 case which features an air duct from the front of the case, over the CPU cooler and out at the rear of the case. As I have yet to test that case, I can’t say how well the NT01 will perform in this environment, but I would presume that SilverStone has matched the two to make the NT01 work as efficiently as possible. I will however use the NT01 when I test the TJ06 and add an update in that review.


Overall the NT01 is an interesting approach to CPU cooling, and although it is not the ideal solution for high-end CPUs it should be appealing as a low noise cooling solution for anyone using a low or midrange CPU in combination with a suitable case and motherboard. It’s always good to see a product that differentiates itself from what is already available and at £29 there are far more expensive low noise cooling solutions around.


The SilverStone NT01 is a novel approach to cooling noisy computers, but unless you have the correct hardware to go with it, it won’t work as well as intended. It is affordable however, and with an extra fan or two it should even work well in high-end PCs.