Shuttle has done an outstanding job of improving its brand awareness over the past few years. Since launching one of the first SFF (Small Form Factor) machines, the name is now interchanged in the same way a Vacuum Cleaner is often referred to as a Hoover. This is most likely helped along, by the fact “Shuttle” is a hell of a lot easier to say than “Small Form Factor PC” or even “SFF”.


The machine in front of me today is one that I’ve been looking forward to reviewing for quite some time. I first saw it CeBIT, and then again at Computex, so it’s taken quite some time for Shuttle to get this to the market, but better late than never right?


Unlike the Shuttle Barebones units we’ve previously looked at, this is sold as an entire machine. It is fully configurable from the Shuttle website and price can vary considerably, depending on what components you choose.

This is an incredibly cute piece of kit. It’s only 55mm high, or wide if you choose to stand it on it’s side. At only a 300mm long and 210mm wide, it’s barely larger than an external optical drive. 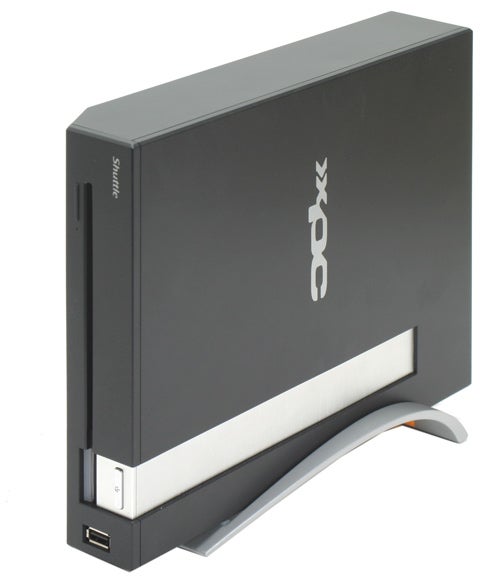 On its side, it is just as stylish and will take up less desk space. As you can see the, the optical drive is slot loading, which I’ve always been a sucker for. The only issue I’ve ever had with this, is when using non standard shaped media, like credit card CDs, or GameCube sized DVDs.


There is no reset button, but there is a power button hidden in the silver strip. Holding this down for a few seconds will shut down even a crashed PC, so a reset button is a fairly unnecessary. Underneath this button is a small blue glowing acrylic square that indicates when the machine is turned on. This isn’t too bright and looks really cool. Above this, almost going unnoticed, is a four in one card reader which accepts SD, MS, MS-Pro and MMC.


A single USB 2.0 port decorates the front panel for easy access. At first I was a little disappointed not to see a headphone output on the front, but considering the size of the device and simplicity of the design, it’s not hard to find the right output at the rear of the case. 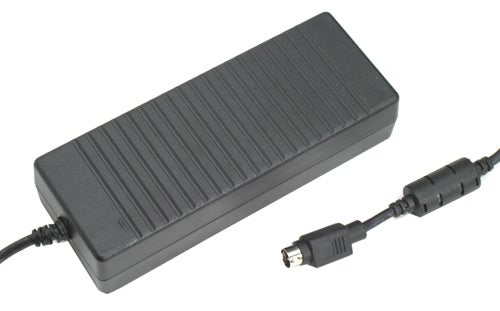 One way Shuttle has managed to keep the size down is by keeping the power supply external to the unit itself. This can be easily hidden away, while reducing the size of the unit. It’s a similar size to those we see on high end notebooks at least.

On the back of the device, things look really neat. No blanking plates – this is custom designed from the beginning.


Four USB 2.0 ports, plus the one on the front means plenty of connectivity, as well as the six-pin FireWire. However, there are no PS/2 or parallel ports, so take into account that you will need these USB ports for your keyboard, mouse and printer.


There are three analogue connectors for the sound, but should you need more than 5.1 output, there is optical output, for the full 7.1-channels. Gigabit Ethernet ensures high speed connectivity to your LAN.


Aside from the S-Video output, there is only one dual-link DVI port. This is a real limitation, as more and more people are using dual displays. Although you could use a Matrox DualHead2Go, but this will add to the cost of the machine considerably. 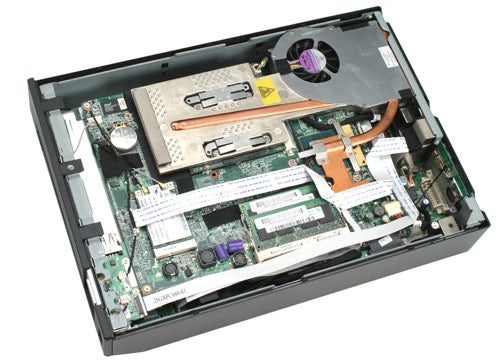 Inside, things are neatly packed, resembling a notebook rather than a desktop PC. The memory is in SODIMM format, in this case two 256MB modules, which is less than I’d like to see. The graphics chip is an ATI X1400, which is a low range graphics card that will suffice for casual gaming. This is actually an MXM module, which is an expansion method often employed by notebooks.


Continuing with the notebook theme, the processor is Socket 479, so can accept a Core Duo (Yonah) or Core 2 Duo (Merom). Our particular unit came with a Core Duo running at 1.6GHz. We’d sooner see a Core 2 Duo inside, but remember, these systems are fully configurable!


From a technology stand point, this is a notebook in a box, without a screen, keyboard or mouse. This brings with it the benefit of making it very small and incredibly quiet, but has the downside of little or no expansion. There are no PCI or PCI Express slots, or even PC Card. There is a single Mini PCI slot, which in our machine was taken up by a Wireless card.


Lack of expansion is not such a big issue, as so much stuff is now available through either USB 2.0 or FireWire.

Benchmarking this system is kind of pointless, as not only is this particular unit a little underpowered, but everyone has different needs and will configure a machine appropriately. However, I did run SpodeMark2D to see how it compared to some rival systems. I also ran some games to get a feel for performance, and was disappointed. Settings have to be particularly low in order get a decent frame rate.


Unfortunately for Shuttle, 3D performance wasn’t the only casualty, with 2D performance being particuarly under par. Our reference 3.8GHz Pentium 4 and Core 2 Duo E6400 machines where well over double the speed. I’m sure a lot of this is due to our test rigs having 2GB of system memory, instead of a lowly 512MB.


I have no doubts that properly configured, this system will be able to keep up with the best of them. The use of a standard desktop hard drive instead of a notebook drive will also help considerably. 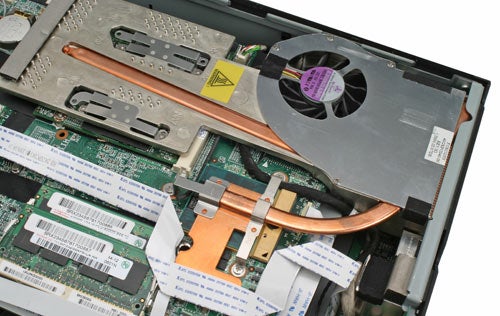 
I really do like the X100, it’s sleek, silent and just the right size. However, the lack of dual display output is a considerable problem, as is the price. Although this system is around £750, a decent spec machine is around the £1,000 mark. That’s a lot of money to spend considering what sort of desktop PC you could purchase, or even a notebook. A notebook has the added benefit of being portable, having a display built in and allowing you to plug in a second screen if necessary.


If none of these issues have put you off and you want an ultra small, silent, potentially powerful PC – the X100 is well worth considering.