For some time now we’ve been telling people that when it comes to computers – small is the new big. By now, Small Form Factor (SFF) systems were supposed to have replaced the towering behemoths that currently take up space in most people’s offices. Shuttle was the first to introduce these type of systems with its XPS line but they haven’t managed to attain the widespread popularity expected of them.


One of the reasons for this is price. Shuttle’s are notoriously expensive, and while it keeps up with technology and offers the latest chipsets, scant few XPC bargains may be found. When you consider that you can buy a complete PC from Dell for £299, the SN27P2 looks expensive, when the £319.95 asking price only includes the case, motherboard and a 400W PSU. 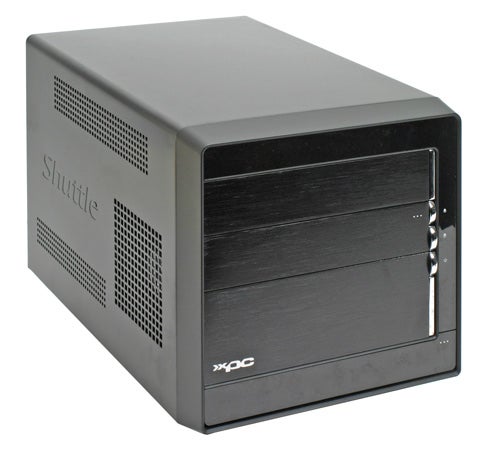 It’s somewhat unsporting to compare the SN27P2 barebones to the cheapest desktop Dell is selling on the day of this review. The Dell in question, the Dimension 3100C, is not easy on the eye. It’s a half-height, black plastic chunk, with a Celeron D, 256MB of RAM and integrated graphics. What it does offer is a low price tag and a well-trusted brand, like the Ford Fiesta of desktop computing.


While the SN27P2 can’t match the price of the Dell it does triumph over it in terms of style, features and upgradeability. The barebone system is based on nVidia’s nForce 570 Ultra MCP chipset, which supports the new AMD Socket M2 processors and provides four RAM slots for up to 4GB of PC6400 DDR2 memory in dual-channel mode. 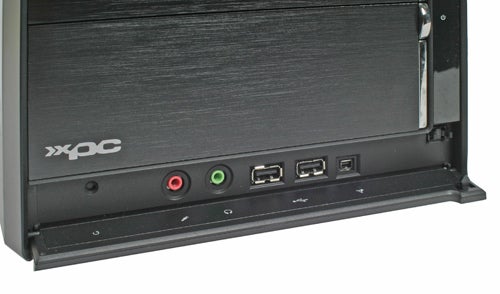 This XPC doesn’t come with integrated graphics, as the £299 Dell does, but the system provides both a PCI-E 16x socket and a six-pin PCI-E power connector. The nForce 570 performs well as a gaming board, and there’s just about sufficient space for a double slot graphics card should you wish to shoehorn one in. The main problem with this though, is that it blocks the motherboard’s single 32-bit PCI slot.


This effectively prevents the installation of an internal soundcard, however the SN27P2 has acceptable onboard sound. The inbuilt Realtek ALC882 provides 7.1 channel sound, while a lone USB header will allow you to attach a single internal USB device or backplane.


You can expand the system to store a fair amount of data too. The board’s SATA2 controller is wired to three internal SATA ports and one external port and provides support for RAID 0 / 1 / 0+1, and RAID 5. IDE drives are less well supported though, with only a single port for use with an optical drive.


As you’d expect from Shuttle the outside of the case is bristling with even more connections than the inside. The back of the case has connections for a Marvell Gigabit LAN socket, analogue outputs for the 7.1 surround sound, S/PDIF Optical in and out as well as an S/PDIF Coaxial Output. You’ll also find six USB 2.0 ports, a FireWire port, and the aforementioned external SATA port. Hidden down at the bottom of the case is an external CMOS clear switch, which although not often used, makes it easy to remedy any mistakes you make in the BIOS setup. 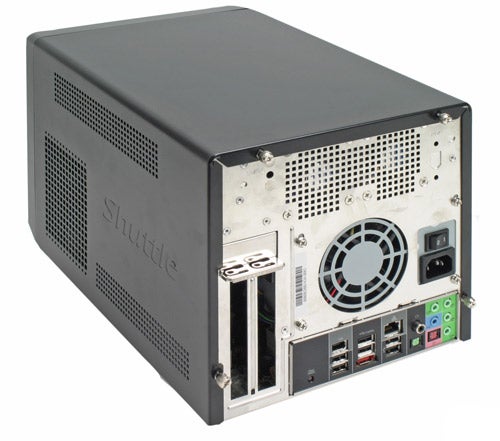 Hidden behind a flap, the front of the case provides a further pair of USB 2.0 ports, and a mini FireWire port. Additionally, there’s easily accessible headphone and microphone jacks on the front.


Invariably, the most important factor in any SFF system is how the case enables cooling air to flow over the components. This is a major stumbling point of many compact systems: cramming toasty hot parts into a toaster sized case without adequate ventilation.

Shuttle had already cracked the problem of heat when they released the P series of cases a couple of years ago. The SN27P2’s encased in the second generation of this chassis, so you’d expect it to provide at least as much cooling and space for drives as its predecessor. And you’d be right.


Key to the P’s success was the manner in which it compartmentalised the system’s components. The primary drive cradle remained unchanged from the earlier G series of cases, providing 5.25 and 3.5in external drive bays. The older G series of cases provided an extra internal 3.5in bay but as populating all three of these bays was often necessary this had the effect of reducing airflow between the drives causing them and the rest of the system to overheat. 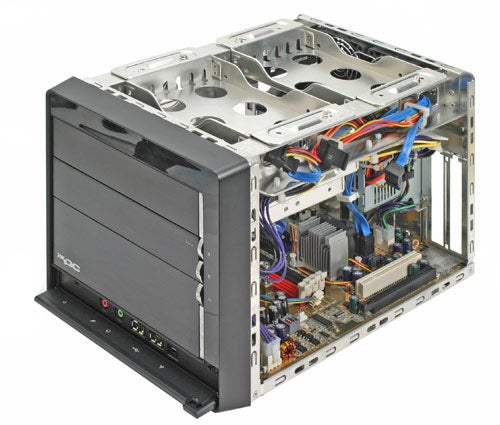 This need not be the case in the P series of cases, though, because two more 3.5in drive cradles are provided in the top of the case. The redesign of these top bays is the most noticeable and welcome addition from the P chassis redesign. The case still comes pre-wired to accept a pair of SATA disks, but the flimsy rails have been replaced with a pair of aluminium cradles.


The drives screw into the sturdy cradles and the cradles are then screwed into the top supports of the case. This system is a lot less fiddly than the clip-on rails of the first P chassis and should also transmit less drive noise than the early model. The drives are not vibration isolated in any way though, so your system will still contain audible whirring and clicking hard disks


The noise level will be largely determined by your choice of hard disks, but at least they won’t suffer from overheating. This is because the drive compartment, in the top of the case, is cooled by a pair of 60mm exhaust fans. These may be speed controlled by the BIOS’ SmartX functions and remain near silent under normal operation. The new P2 revision also includes a header and space for a (noisy) 40mm fan to provide additional cooling if required. 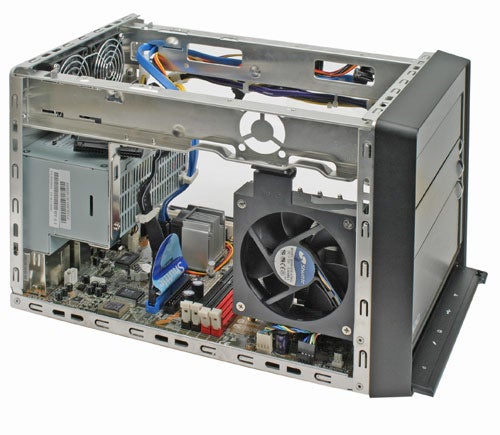 Unlike the drive compartment, Shuttle’s ICE CPU heasink and fan hasn’t noticeably changed from the previous version. It’s still secured atop the CPU by four large bolts, and the 70mm exhaust and 92mm intake fans still suck cool air from vents on one side of the case and expel warm exhaust air directly out of the other. Once again, these fans are speed controlled by the motherboard. Unlike the smaller fans in the drive compartment, these are swift to fire up to full speed, particularly when you are playing a game or encoding video.


We tested the SN27P2 with an pretty full-on AMD FX-62, 2GB of Corsair 800MHz DDR2 memory, a Seagate Barracuda ST3400832AS hard disk and an nVidia 7900 GT. For comparison we put the Shuttle up against a reference system in a Abit KN9 motherboard and against a SK22G2, another Shuttle system. This result will mean more after we publish a full review of that system shortly. 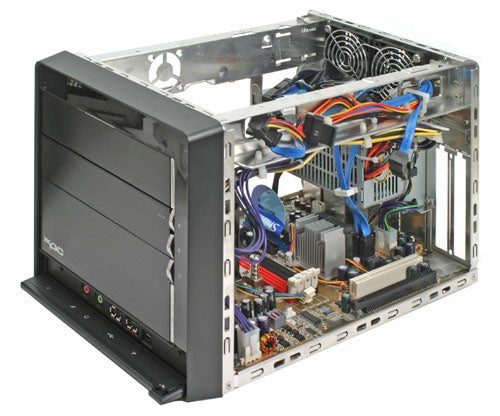 The computer suffered no stability problems during any of the tests, completing each on the first attempt: no mean feat when running such a powerful CPU and graphics card.


If you’re short of space on your desk, but still require a powerful PC for home video editing or gaming then the SN27P2 fits the bill. It’s stable and relatively quiet with even the most demanding CPU in place. The price, at over £300, is quite high but a high-quality motherboard, case and PSU would cost a similar amount of money.


While the SN27P2 may perform very well for an M2 system it’s still not a match for Intel’s Core Duo, so it might be worth keeping an eye out for the SD37P2, which uses the same case but features an Intel 975X Socket 775 motherboard inside.