Earlier this week we looked at Shuttle’s SN27P2 barebones and at over £300 we thought it a touch too expensive. If you agreed with this, then you should cease your lamenting and have a peek at Shuttle’s budget AM2 barebones instead. 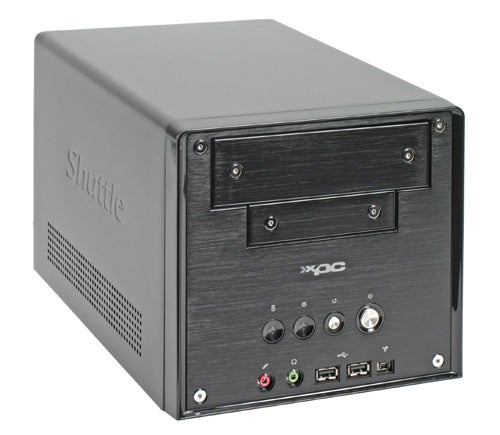 It’s a smidgen cheaper than the Dell Dimension 3100C – which costs £299 and comes with a Celeron D, 256MB of RAM and integrated graphics – but you’d still need to spend money on a keyboard, mouse and monitor to go with your newly built barebone system.


However, while the SK22G2 might not be quite as cheap as Dell’s 3100C it certainly looks a darn sight better. Although the Shuttle is based on the veteran G series chassis it’s a simple design, which has aged gracefully. Fortunately, the motherboard isn’t from the same era as the chassis. The motherboard’s controlled by a VIA K8M890CE, which supports the new AMD Socket AM2 processors and provides two RAM slots for up to 4GB of PC6400 DDR2 memory.


The system comes with both a PCI-E x16 slot and ViaChrome integrated graphics. However the case doesn’t have a 6-pin PCI-E power connector, and there’s barely enough space or ventilation for a single slot graphics card. You could leave the PCI-E slot and 32-bit PCI slot free though and use the integrated graphics and audio like the Dell does. 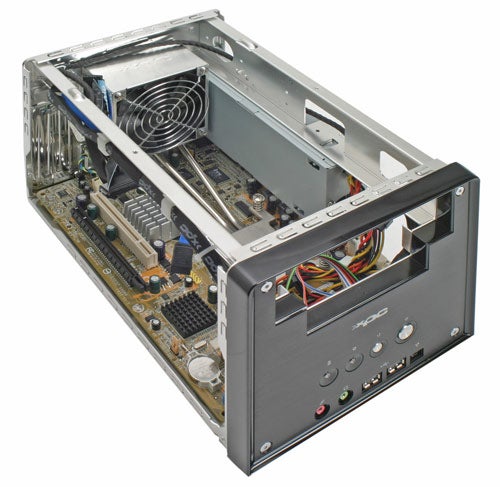 The integrated ViaChrome graphic chipset, although DirectX 9 compliant, isn’t suitable for high-resolution gaming. It is however, perfectly good for desktop applications and video playback. Since the on-board graphics has a couple of hardware pixel shaders it will also work with Vista should you be brave enough to try.


What you will find yourself using, unless you want to fill the system’s only 32-bit PCI slot with a soundcard, is the integrated audio. The in-built Realtek ACL655 provides 5.1-channel sound and while it may not sound as nice as an Audigy X-Fi, the quality is still relatively high. 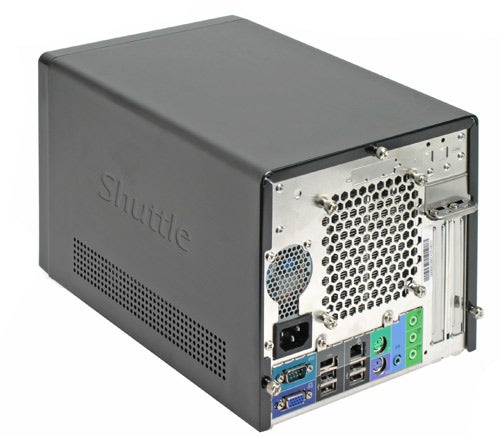 If your intention is to use the SK22G2 as the base for a media PC then you should be aware of its limited space for drives even though the specs may not suggest it. The board’s SATA2 controller is wired to two internal SATA ports and provides support for RAID 0 / 1 / 0+1, and RAID 5. There’s also a single IDE channel, which enables you to connect two IDE devices and a pair of Molex power connectors dangle in the correct position should you wish to use a pair of IDE drives.


Although internal connections are sparse, the exterior of the case helps to remedy the problem. The back of the case has connections for LAN, analogue outputs for the 5.1 surround sound and an S/PDIF in/out socket. You’ll also find four USB 2.0 ports, a FireWire port and a serial and D-Sub monitor port. Hidden down at the bottom of the case is an external CMOS clear switch. This unmarked switch makes it easy to remedy any mistakes made in the BIOS setup.

The front of the case provides a further pair of USB 2.0 ports and a mini FireWire port. Additionally, there’s easily accessible headphone and microphone jacks on the front.


In SFF cases, like this one, the internal layout and cooling determine how suitable the case is for powerful components. The first generation G chassis had considerable problems shifting heat away from the drives. While a computer may overheat without crashing, it reduces the lifespan of your components – particularly hard drives. 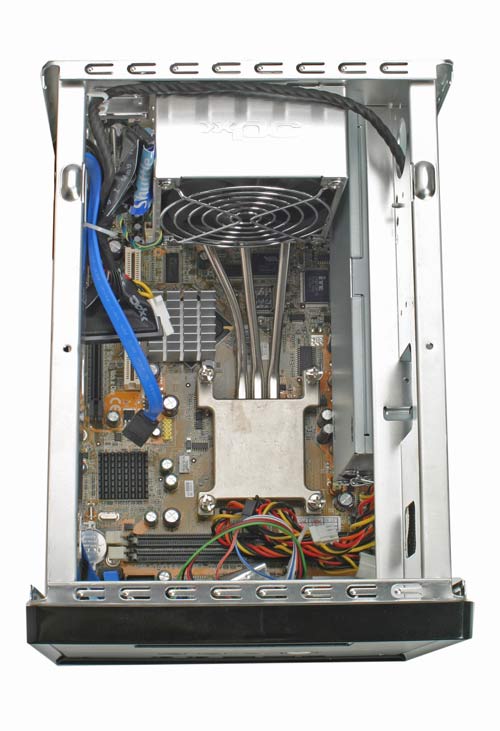 Indeed it’s the system’s drives that will suffer most in the SK22G2 as well. As with the original G cases, a caddy provides two external 5.25in and 3.5in bays and an internal 3.5 bay. To aid installation these are held in a caddy, which bolts into the chassis. The drives are crammed into the front of the case without any ventilation so because of this you should never fill the external 3.5in bay as your disks will run dangerously hot.


Even with this space left free, there’ll be minimal airflow between the drives; cool air is sucked in from vents in the sides of the case. The SK22G2 only contains two fans in total: one 40mm fan sits in the system’s 200W Active PFC PSU, and a single 92mm exhaust fan provides airflow for the system and cooling for the CPU. 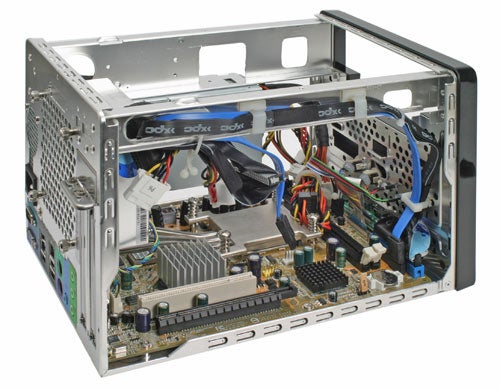 Shuttle calls this 92mm HSF an Integrated Cooling Engine (ICE). Much like the rest of the chassis, the design hasn’t changed noticeably from the original. The ICE is a heat pipe cooler much like any other. The base, which sits atop the CPU, bolts down to the chassis with four large screws. Three heatpipes carry heat from the base, up and into the path of the temperature controlled fan, which blows it straight out of the case.


This system is fine for an older CPU, like the Sempron 2800, however the old design provides inadequate cooling for high-end processors. As our benchmarks testify it’s possible to run an FX-62 under heavy load in the system, but it required a BIOS update before it would spin the 92mm fan fast enough to keep the CPU running smoothly. The price paid for the stability of our overpowered test CPU was an ear splittingly loud fan.


At half the price of the SN27P2, the SK22G2 presents great value, and it scored very well in the benchmarks. These performance results are deceptive though, because the system will overheat when used with a CPU of this power. The cooling system is much better suited to a lower power CPU, like a Sempron or single-core Athlon. With the correct CPU you’ll find the SK22G2 to be reasonably quiet when the system is running idle.