There are occasions where ‘bigger is better’ doesn’t necessarily apply. One of these is the computer case. Sure, bigger allows for better cooling and more expandability and features, but it’s not exactly ideal for taking your PC to a LAN party or your parents’ place for a holiday. Quite aside from which, there is great appeal in having a very powerful system in a deceptively small case, similar to sticking NOS in a Ford Ka. Being largely responsible for making the small form factor (SFF) PC the success it is today, Shuttle has a tradition of producing some of the most desirable barebones SFFs around. Will the company succeed yet again with its SP45H7? 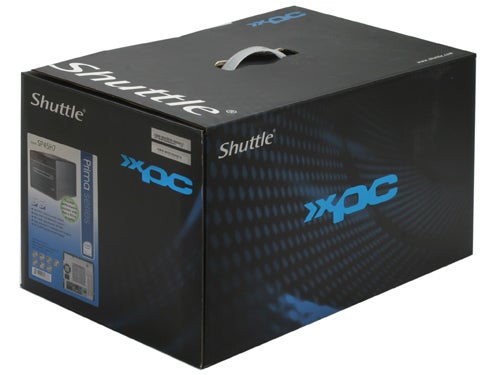 Part of the XPC Prima series, the SP45H7 is aimed at gamers and enthusiasts who are willing to settle for less than the top-end. As its name suggests, it’s based around Intel’s P45 chipset, and falls between Shuttle’s premium SX48P2 machines and its bottom-of-the-range SP35P2 Pro. The major factors to keep in mind are that it only supports mid-range graphics cards due to a 300W power supply but should be able to cope with most Core 2 processors and, unlike the DDR3-sporting SX48s, it uses more affordable DDR2 memory. Most importantly, for some, it’s of the smaller chassis type that Shuttle offer, measuring 32.5 x 20.8 x 18.9 cm.

The SP45H7 comes securely packaged and with a nice bundle. This includes 18 spare screws of various types, two cable-ties and an L-connector SATA cable. There are also two rubber screw-in feet, which raise the Shuttle slightly higher at one end for better ventilation, a spare EIDE cable (though since there is a slim one pre-installed in the case this has no obvious use) and best of all, one of the most comprehensive system-building guides we’ve seen. 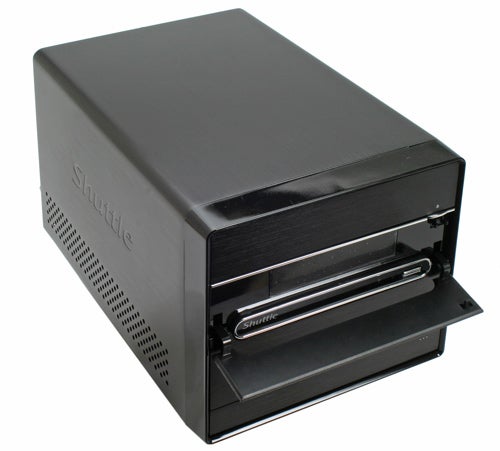 Getting onto the machine itself, as you’d expect from Shuttle it is a very attractive and well-built beast. Aside from a small plastic surround at the front, the entire exterior is brushed black aluminium, with chrome highlights. Two hinged panels on the front give access to an unoccupied 3.5in bay (always handy for a memory card reader or the like) and below this are various connections including two USBs, headphone and microphone jacks, a recessed reset button and best of all, an eSATA port. Thankfully, the hinges seemed to be fairly robust so shouldn’t break as easily as some we’ve previously encountered.


The SP45H7 might not be the easiest or most intuitive system to build, since the small space means everything has to be done in a very specific manner and order. But thanks to the aforementioned excellent full-colour system-building guide it’s a painless process, with clearly-marked illustrations and photos guiding you through every necessary step to turn this shuttle from a barebones into a fully working machine.

Opening the SP45H7 up is simply accomplished by removing three thumb screws, after which the entire top slides off. Inside, things are very tidy, and well laid out to maximize the available space. This Shuttle can accommodate older components thanks to a single PCI slot (though it can only be used if installing a single-slot graphics card) and twin EIDE connectors for PATA drives. Together with the SATA connectors, the EIDE cable is routed from the lower front of the case through a metal tube to the upper back, in an ideal position to hook up your kit. The EIDE cable is incredibly thin, in fact the same width as the SATA ones, but obviously tapers out to full width at the connectors. It does spoil the look of things somewhat, but can be removed with a little effort by unscrewing the metal cable-guide tube. On the opposite side at the top is a similarly-routed power cable with a 4-pin Molex and SATA power cable. 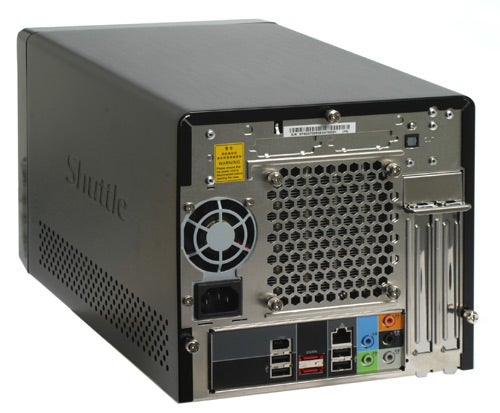 Overall, this gives you two SATA data connections with a header left free on the motherboard, three SATA power connections and two Molex ones. There is also a six-pin power connector to give extra juice to whatever graphics card you choose to install. As already mentioned, the biggest limiter here is the slim 300W power supply. However, Shuttle does offer a similarly slim 450W power supply for purchase seperately, so the potential to upgrade is there.


Just for reference, you can actually fit a large graphics card like an nVidia GeForce GTX260 if you upgrade the PSU. The only problem is that the power connectors at the top of the card come too close to an edge of the drive cage, meaning some creative work on cutting into the plastic of the six-pin connectors will be required. Obviously this is not something we recommend you try unless you have modding experience and don’t mind running the risk of messing up your PSU and warranty. 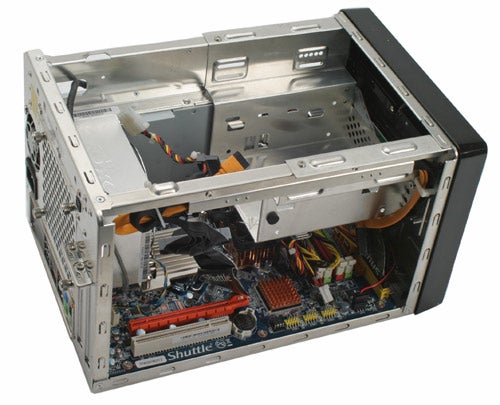 Cooling becomes another issue with cards like this, so all told it’s best to be sensible and use a more modest card. Also, make sure that when assembling the system, the video-card is the last component you install.

The components we used for our basic build were as follows:

The first step after opening the Shuttle up is taking out the drive cage by removing two cross-head screws. This cage allows for two 3.5in devices and a single 5.25in drive, and removing it gives you easy access to the RAM slots. There are four of these, and they can take a total of 8GB DDR2 memory, which can run at up to 1066MHz. On its website Shuttle has the SP45H7’s memory limit at 16GB, but on the box there is a sticker stating an 8GB limit. This is likely related to users on various forums who have been reporting problems with 16GB in the SP45H7, leading to incredibly slow system performance. Then again, if you need that much memory you probably shouldn’t be looking at getting an SFF PC anyway. Corsair Dominator RAM is some of the tallest memory on the market thanks to massive heatsinks, but in our test-build it fitted below the drive cage with room to spare. 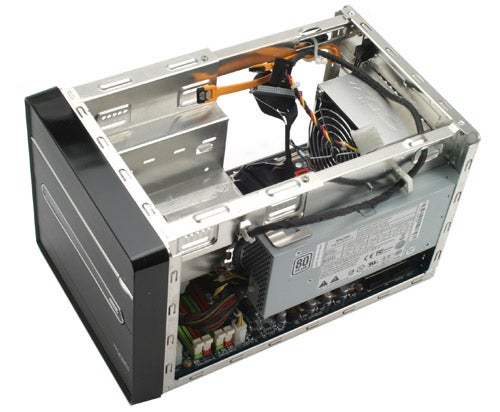 Installing the processor is a bit more convoluted than usual thanks to Shuttle’s proprietary Integrated Cooling Engine (with the cool acronym ICE). This consists of a copper block with heatpipes leading to a finned aluminium block that is cooled by a single 120mm fan, which at the same time extracts heat from the case. Overall it’s a very clever and efficient system, both in terms of noise and space, and it kept the CPU at a maximum of 58 degrees Celsius in our warm office. 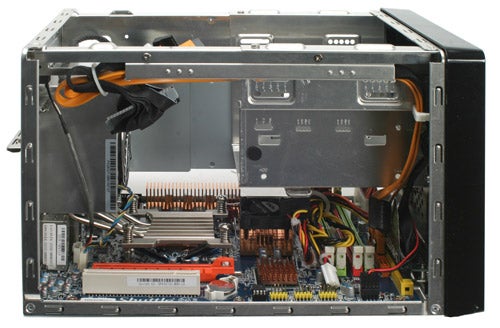 The only real niggle as far as cooling is concerned is that the motherboard chipset is actively cooled by a tiny fan, which seems like a step backward from the passive cooling on Shuttle’s previous P30 series. Despite this, the SP45H7 still makes for a very quiet system, especially considering its size. Nor is its performance anything to be ashamed of. Of course we did use a budget CPU and mid-range GPU, but nevertheless our little system ran Crysis at 1,920 x 1,200 on medium detail at 35FPS average, remaining very cool all the while. Using a higher-end Quad-Core processor with an ATI Radeon 4870 (which will require a twin-molex to six-pin adapter and probably a PSU upgrade) would give you a very capable gaming machine, though when we installed a Q9770 things did get very toasty, so you might want to aim a little lower. 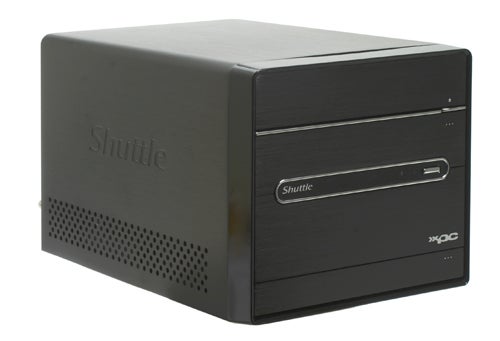 However, the main reason you may want to use budget components is that Shuttles command a considerable premium over standard barebones cases. Considering the SP45H7 is midrange for the XPC Prima Series, a price of around £320 does seem a little on the steep side (if this kind of money is small change to you, there’s little reason not to go for the top-end SX48P2 Deluxe unless the SP45H7’s slightly smaller dimensions appeal to you more). But though you could get a small Core 2-compatible system for half the price of the SP45H7, you’ll be hard-pressed to find one that is quite as small or that matches the Shuttle’s combination of features and build-quality.


Shuttle’s well-built and feature-laden XPC Prima Series SP45H7 SFF barebones system is cool, quiet and attractive. It might be expensive, but at least you’re paying a premium price for a premium product.