Back in July, Shuttle announced the latest addition to its XPC Glamor line of small form factor PCs, the SN68SG2. We were, as is always the case with new Shuttles, suitably impressed by its stats sheets and glamour shots and knew straight away we just had to get one in for review. Now, just shy of a couple of months later we have that pleasure. 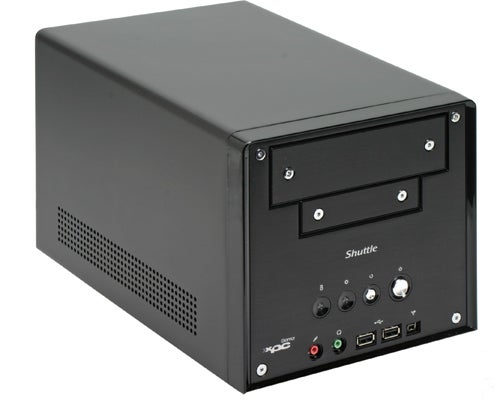 Shuttle produces two main lines of XPC chassis (there are a few unique ones as well), the G series and the P series. The latter, like the SD39P2 that Benny recently looked at, is a later development from the original G series and is aimed at the power user so it can, for instance, take dual slot graphics cards and fit three hard drives. However, the SN68SG2 is of the more petite G variety and is limited to a single hard drive and will only fit a single slot graphics card. Not that this is a problem, in fact it’s just perfect for general office and multimedia use.


Reflecting this mainstream focus, the SN68SG2 is an AMD system based on nVidia’s 630a chipset, which supports all AMD’s current crop of Athlon64, X2, and Sempron CPUs. It has support for a maximum of 4GB of 800MHz DDR2 RAM and includes integrated graphics in the form of the GeForce 7025 processor. If you feel this a bit underpowered, though, you can add in a separate graphics card, using the single PCI-E x16 slot, making it the ideal compact gaming machine or workstation.


One area where Shuttle cases almost never fail to impress is with their aesthetics. Sure, they’re not the most wacky, revolutionary, or standout boxes available but for sheer elegance and simplicity they seldom fall short. And, so it is with the SN68SG2. 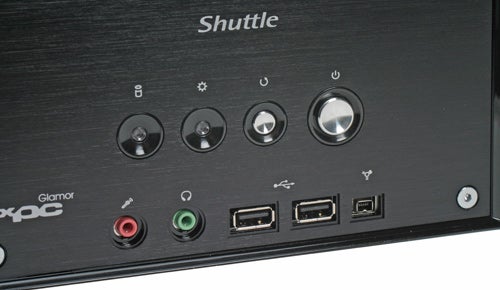 The finish of the black anodised brushed aluminium top and sides is simply sublime. Not a single blemish, whether it be a scratch, embossed logo, or sticker is present, leaving a smooth, luscious finish that just oozes quality. OK, it may attract greasy fingerprints, but then glossy surfaces show the dust and matt paint is just boring and certainly not befitting of the Glamor title. The styling of the front is a bit more of a personal preference. Personally I find having all the connections and bolt heads exposed makes the front look a bit cluttered and I prefer the clean lines of the G5 or G6 chassis. That said, Riyad’s a big fan so it just goes to show, these things are subjective.

In terms of connectivity, the front is well stocked and the usual USB, 4-pin Firewire, and audio ports are all present. However, being a bare bones system, there is no memory card reader so you’ll have to buy a separate one to pop in the external 3.5in drive bay. Likewise, you’ll have to source your own CD/DVD/HD DVD/Blu-ray drive to fit the spare 5.25in as well.


Round the back things are a bit more complete, with no extra expansion cards being required to get your system up and running. That said, only D-Sub output is provided by the onboard graphics so if you have an LCD display with a DVI input or want to connect up an HDTV, you’ll need to invest in a basic discrete graphics card at the very least. The rest, though, is well catered for with four USB ports, two eSATA sockets, an 8-pin Firewire port, Gigabit Ethernet network connectivity, and five 3.5mm jack sockets, for 7.1-channel audio, all present. 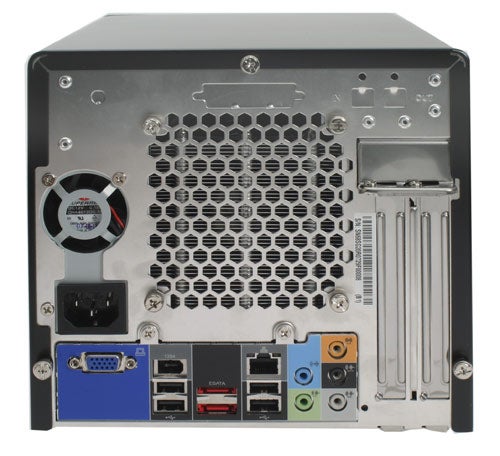 Removing the lid, the insides of the case are shown in all their compact and beautifully manufactured glory. All the edges are either rounded or polished so there’s no risk of cutting yourself when working in the cramped interior and, because the entire case is made of aluminium, it is both lightweight and strong.


Due to its cramped interior, the SN68SG2 uses its own custom motherboard, which we found to be very well laid out with everything just where you’d expect. Likewise it has a custom power supply that is rated to 250W, which will be enough to power anything and everything that you could possibly fit inside this small chassis. Also, given the lack of space, there isn’t room for a conventional CPU cooler so Shuttle uses its own ICE2 cooler. It uses three heatpipes to draw energy from the CPU at the centre of the case to the radiator and fan at the back. As you’ll see in our testing the effectiveness of the ICE is certainly up to debate, though. 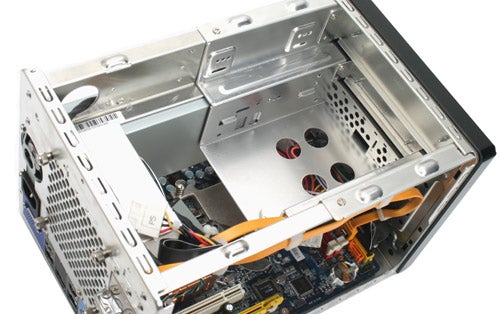 Accessing the interior is a two stage process and adding components requires a bit of forethought, but is ultimately quite simple. First, the drive caddy must be removed, then the ICE heatpipe cooling system can be removed allowing you to add in your CPU, RAM, and graphics card. You then work backwards adding in the cooling mechanism, and the drive caddy until, hopefully, all your components are hooked up and ready to go.


In terms of graphics cards, as mentioned earlier, the SN68SG2 cannot take dual-slot cards (i.e. ones with big coolers) so any variant of nVidia GeForce 8800 or ATI Radeon HD 2900 is out of the question. However, anything below these should be fine so long as it doesn’t require extra power from a dedicated six-pin power connector. For our testing we used a reference design Radeon HD 2600 XT and it fits perfectly. In fact, the holes along the side of the case align exactly with the intake for the cooler so it’s kept well supplied with cool air too.

Once everything is in, there is very little space wasted and if it weren’t for all the cables being in place when you buy the system, you’d have a hard time routing them all yourself – Shuttle really do make this as easy as possible.


To test the performance of this barebones system we added an AMD Athlon64 X2 5000+, 2GB Corsair XMS2 PC 6400 DDR2 RAM, a 400GB Seagate Barracuda hard drive, a Plextor CD/DVD re-writer drive, and the aforementioned graphics card. We tested using our usual 2D and 3D benchmarks though, given most of the performance comes down to the CPU, RAM and graphics card, these results are more a reflection of the stability of the platform and thermal performance of the chassis. Even so, it’s worth noting the setup we used, which is fairly low budget, still performed very well in all of our testing. 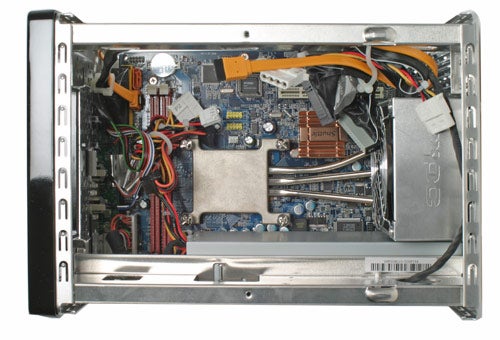 So, the SN68SG2 is small, fast, dark, and handsome, so surely deserves a recommended award? Well, not quite. While the performance and ergonomics of the system and chassis are without fault, it does fall down on heat and noise issues. As soon as the CPU had anything remotely taxing to do, the PSU fan kicked into overdrive and succeeded in making the SN68SG2 sound and feel more like a rather cumbersome hairdryer than a sleek tabletop computer. And, no matter what I did, I couldn’t get it to quieten down during our gaming and video encoding tests. I tried adjusting the CPU fan to low, rather than spinning up automatically, but the system crashed under intense load.


The fan certainly needs to spin up as parts of the power management circuitry, the MOSFETs, rose to temperatures over 100 degrees Celsius during our testing, which is above anything I’ve come across before. I’d suggest putting a heatsink on them might be a good way to go for the next version. 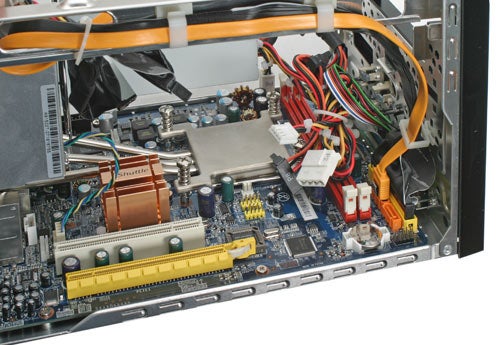 
The SN68SG2 is another in the long list of well built, easy to use, great looking small form factor PCs from Shuttle. And, if all you need is a computer for casual office work with the occasional bit of gaming, it is just perfect. However, it is let down by a cooling system that can’t cope with regular intense use and as such it isn’t appropriate for the power user.