With modern computers as powerful as they are, and off the shelf software capable of competing with professional studios, cutting your own album from home is a relatively inexpensive and simple task. All you have to do is browse Jamendo.com or MySpace to see how many artists have gone their own way. Brad Sucks jumps to mind and is definitely worth checking out. 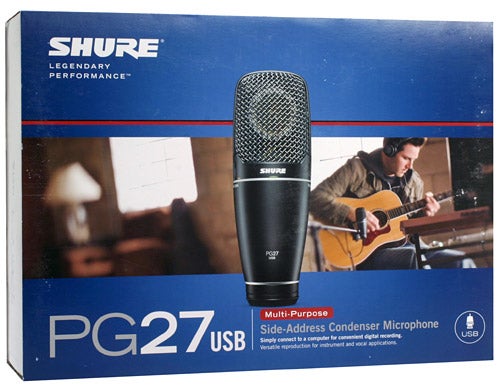 The biggest problem with recording on a computer are noises that you don’t want to hear. If you use the microphone input on a computer’s sound card, it will require certain amount of gain to bring the volume up from your microphone. Being amplified at the computer level means that it can also amplify any other noises nearby. Often you’ll hear hard drive noise and perhaps EMI produced from spinning fans.


Consistent noises are the easiest to remove, but certainly in the case of hard drive noise, it can be erratic and nearly impossible to eradicate. Of course, if you’re only using your microphone for Skype then this is perfectly acceptable. But when it comes to recording audio, you’ll want something a little better… 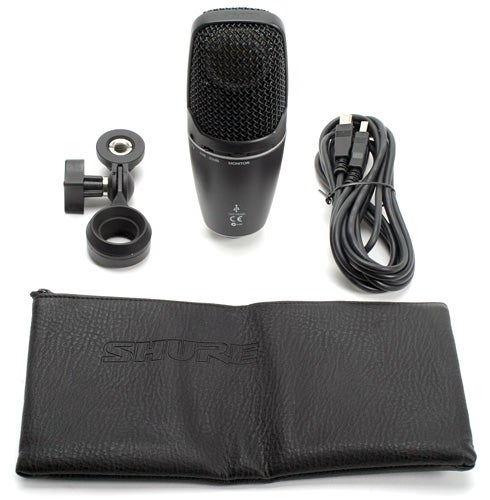 By using a preamp and turning the gain off on your sound card, you are amplifying the signal before it hits the computer. Hopefully, this will reduce or perhaps even eliminate the noises that your computer makes.


In reality though, or at least from my experience using a Shure SM7A microphone and Behringer preamp, there is still plenty of white noise that will find its way into the recording. Every time you use noise reduction filters, you run the risk of affecting the quality of the recording. This is really noticeable when you are multi tracking – layering up several sounds on top of each other. You can hear the hiss increase in volume as each track kicks in.


And this is where the Shure PG27USB microphone we have here comes in, as it solves so many problems at once that you’d have to pay me to move back to an analogue setup. 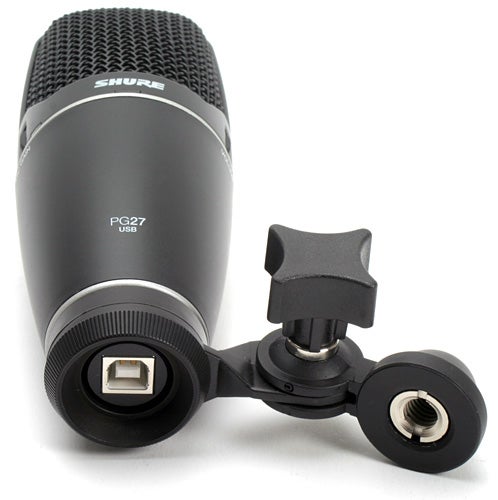 Much to Riyad’s excitement, the first thing I’m going to do is commend Shure on its packaging. Although it looks like a fairly standard cardboard box, it uses foam cut outs similar to those you’d find in aluminium carry cases, specifically designed and shaped for the microphone. This means you can reuse it if you happen to be on the move a lot. If that’s not enough, the company also includes what looks like a faux leather padded pencil case, which the microphone comfortable nestles into.


A 3m USB cable is also included – an ample length – as well as an adapter for fitting the mic to a stand. You will need a microphone stand to properly use this device and Shure offer a number of accessories to this effect. I attached it to my own swing arm, much like you see in broadcast studios.

Officially, the Shure PG27USB works under both Windows and Mac operating systems and requires no drivers. But as it’s simply a standard USB audio device, it also worked on Ubuntu 9.04 ‘Jaunty’ with no configuration required either.


Using the Open Source ‘Audacity’, I simply selected the Shure microphone as my input and output devices and I was ready to go. I didn’t have to fiddle around in any sound recorder settings as all of this is taken care of before the signal is digitised.


The microphone itself offers much more than meets the eye – it’s really a microphone, preamp and monitor all in one. Adjusting the gain is done by a fairly standard roller dial and there is a -20db pad which reduces the gain if you happen to be in a really noisy room or in close proximity to an instrument – for example, a French horn. 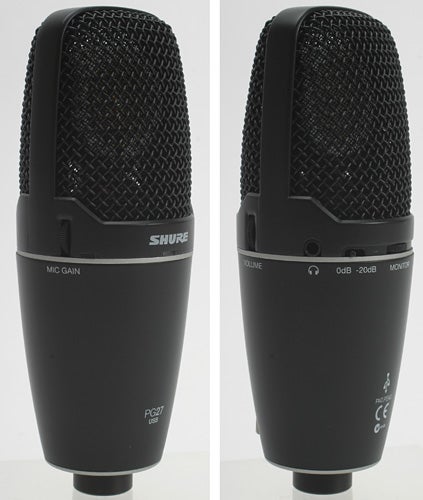 There is an LED indicator, too, that has three colours: green so you know it’s picking you up, yellow to show its near its peak and red if you’re clipping. During recording, you want it to be green when there is sound, with the occasional yellow during the loudest parts. So for initial setup, all you have to do is run a few simple test sounds while adjusting the gain to find the perfect level – you don’t even have to be recording at this stage.


You’ll also notice a headphone jack built into the microphone. This is for zero latency monitoring. When using the sound card on the computer for monitoring, there can be a delay as the sound is processed before it’s sent to the headphones. In this case, it comes directly from the preamp allowing you to monitor the recording in real time. 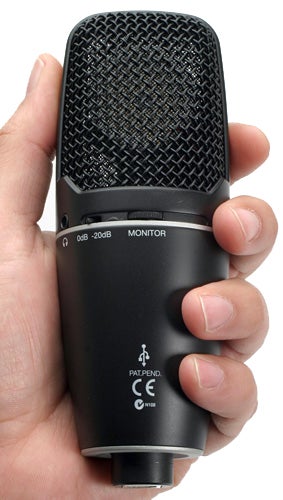 As well as providing an input to the computer, it also provides an output. So while recording, if you’re playing the tracks you are layering over, these will be sent to the microphone to be mixed into the monitor for playback through your headphones.


The outcome of this is, is that you can get almost everything setup without even having to turn your computer on. All of your settings will be completely independent to the machine too, so you could move between several machines and have consistent levels.

On Audacity, I had some minor stuttering issues when recording, but this was solved by increasing the audio buffer from 100 to 250ms. Naturally, I also increased the audio offset to -250ms so that the new tracks lined up with what I was recording over.


At the microphone level, after the sound has been amplified, it is converted to a digital signal before being sent over the USB cable. The upshot of this is that there is almost no discernible background noise.

I tested the microphone by creating my own multi-tracked song featuring some singing and some guitar chords. I applied no compression, normalisation, pitch adjustment or noise reduction and merely layered it all up and adjusted the volumes of each track. The result was a rather impressive and entirely flat waveform, even though I’d usually expect some white noise – clearly indicative of a high quality microphone.


Being a unidirectional cardioid microphone, it also did a pretty good job of cutting out other background noises too. I don’t have double glazing and it was a particularly windy day when I recorded the test, yet this didn’t come through.


At £199, the PG27USB microphone offers a convenient all-in-one solution for any operating system, with the sound quality you would expect from a company like Shure. If you’re into podcasts or recording your own music at home, this is a worthwhile investment.