I seem to be spending a lot of my time evaluating high end in-ear headphones these days. Only yesterday I reviewed the Etymotic Research ER.4 micro Pros and a little while ago I looked at the Ultimate Ears super.fi Pros. Now I’ve got Shure’s latest top of the range in-ear set plugged into my head, and the obvious question is, how do they compare to the competition?


Actually that question is a bit moot, since there isn’t much in the way of competition for these headphones, at least not when it comes to price, but I’ll come to that a bit later. Before I get into the ins and outs of these headphones, I should first make it very clear that these are the best in-ear headphones I have ever listened to, bar none. The sound quality produced by the E500PTH headphones is, quite simply staggering and I defy even the most casual of listener not to be impressed.


What sets the E500PTHs apart from other in-ear headphones on the market is the triple driver design. Despite the relatively small physical size, each headphone has three tiny speakers inside it – one tweeter and two woofers. This means that these headphones really can turn their hand to anything – you want crystal clear high frequencies? You’ve got it! You want booming bass that flows through your skull? You’ve got that too! But most importantly, there’s a near perfect cohesion between the upper and lower end of the frequency spectrum. 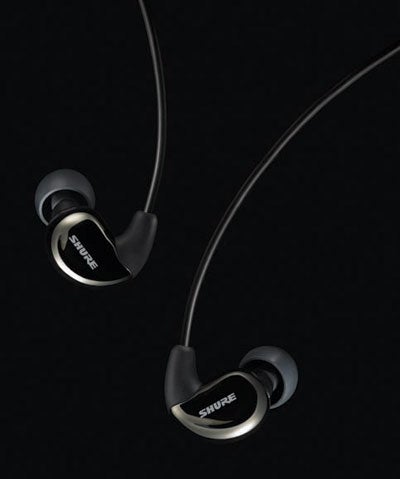 The power is also breathtaking. No matter how high you push the volume, the sound just refuses to distort. Even if you set the EQ on your player to enhance the bass (not that these headphones need that) the triple drivers just take it in their stride, pumping that extra bass out without the slightest hint of distortion creeping into the proceedings.


As I’ve found with all high-end headphones, they can often highlight the limitations of compressed music and the E500PTHs are no exception. It therefore comes as no surprise that Shure markets these headphones as the ideal companion for lossless compression formats, or non-compressed digital music. Having listened to everything from MP3 to AAC to ATRAC, I can honestly say that these headphones really shine when you throw files encoded in formats like Apple lossless or FLAC at them, although 256Kbit ATRAC-3 Plus is also pretty damn good.


I listened to Amazing by George Michael in 192Kbit MP3, 256Kbit ATRAC-3 Plus and uncompressed WAV formats. Even the MP3 file sounded totally captivating with these headphones, but switching to the ATRAC file made me realise just how much difference a good encode makes if you’re using high quality headphones. The WAV file sounded stunning, although it was harder to pick out specific improvements over the 256Kbit ATRAC encode.


Next I fired up Breath Me by Sia, a track that I had recently used to evaluate the Etymotic ER.4 microPro headphones. This is a great test track since it starts off with very subtle acoustics and builds to a loud and enthralling climax. The Etymotic headphones handled this track admirably, but the E500PTHs just took things to a different level – I could still pick out every aspect of each instrument, but the overall effect was just that bit more cohesive, while the crescendo ending just felt so much more powerful.

For a full-on aural assault, I turned to Battle Flag by the Low Fidelity Allstars. If you’re familiar with this track you’ll be aware that the heavy beats and bass line can often overpower the vocals when you’re listening on poor quality headphones, but there were no such issues with these Shures. Every beat reverberated through my head, but not at the expense of clarity – every syllable of every lyric was clearly distinguishable over the cacophony of sound washing through my brain.


Toning things down a bit I sampled the haunting vocals of Anika Moa. Everything’s The Same, from the album Thinking Room is a favourite track of mine; always reminding me of the months I spent touring New Zealand. When you’ve listened to something as often as I have this song, you can instantly appreciate how well rendered it is, and with the E500PTH headphones plugged in, it sounded like never before – Anika’s vocals and harmonies just seem to float above the music creating a sound that I can only describe as beautiful.


The quality doesn’t just extend to the sound though. The cabling is thick and heavy, and feels like it can withstand the rough trials of life that befall portable headphones. If there’s one chink in the armour, it’s that the mirrored coating covering the headphones themselves had already started to chip away on my review sample when I received them. 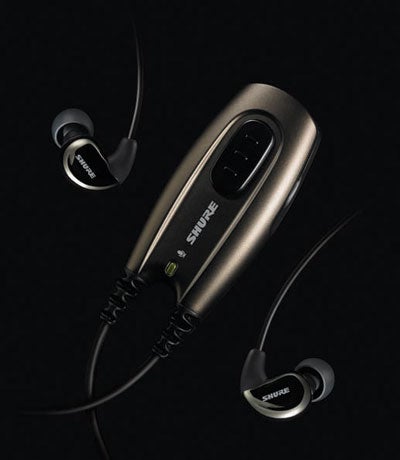 Despite the triple driver design, these Shures don’t feel heavy in your ears. That said, the cable running from the headphones is fairly short and ends at a 3.5mm jack, which then plugs into an extension cable – the result being that the jack and socket make the cable quite heavy, although Shure does provide a cable/shirt clip in the box which deals with this issue.


The reason that Shure has gone for a short cable from the headphones is that instead of using the extension cable, you can plug them into the Push To Hear (PTH) module. When I first saw this I thought it was an active noise cancelling module, which seemed a little pointless considering how much ambient noise these headphones cut out, but in reality, it’s the superb noise isolation that makes the PTH module so cool.


The problem with in-ear, noise isolation headphones is that if you want to talk to someone, stopping the music isn’t enough, since you’ll still barely hear the person in front of you unless you physically remove the ear buds. However, with the PTH module, you simply flick the switch and the volume of the music is dropped back, while a microphone in the PTH lets you hear everything around you without removing the headphones. In practice, the PTH works brilliantly, and saves you the hassle of removing your headphones whenever anyone talks to you.

The Push To Hear module is a truly inspired idea, and anyone that uses in-ear headphones like this will fully appreciate how useful it is. Unfortunately, the PTH unit itself doesn’t exhibit the same level of quality as the rest of the package. For a start the module is very large – to be fair, Shure has had to make space for a battery and microphone, plus all the circuitry, but I still feel that it could have been smaller. Also, there’s a wheel to increase or decrease the gain on the microphone, but this is set so far into the housing that it’s almost impossible to turn, unless you have frighteningly long fingernails. Lastly, the belt clip doesn’t snap tight, so it just hangs from your belt or pocket, without ever feeling that secure.


Unfortunately I can’t really comment on what comes in the box, since the review sample that I was sent didn’t come with any packaging or documentation. What I did receive was a set of silicone tips that were too large to fit in my ears, but thankfully I also got a few pairs of disposable foam tips, which I used. According to the Shure website, you get three pairs of silicone tips (small, medium and large), a set of triple flange tips and a single set of foam tips. You should also get a mini-jack to full-size headphone adapter, a carry case and a level attenuator – to stop you blowing your ear drums by mistake. 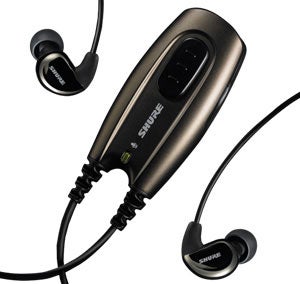 Now, Shure headphones have never been cheap, but the company has really raised the bar with the E500PTH set, with a retail price of £419.99. That’s a staggering amount of money for a pair of headphones, especially when you consider that you could buy three pairs of Ultimate Ears super-fi Pros for that money. However, fantastic as the Ultimate Ears headphones are, these Shures are better, but how much better depends entirely on the sort of person you are.


There’s no doubt that Shure is going after the serious audiophile with these headphones. There is no way that this type of user would ever touch a lossy compression method, so it’s likely that the E500PTHs will be fed a steady diet of losslessly encoded, or uncompressed files, which will show off their talents admirably. It’s also worth remembering that you also get the Push To Hear module, which is very cool, despite its size and build quality issues. Ultimately though, if you find yourself flabbergasted at the price, you’re not Shure’s target customer.


These are the best in-ear headphones I’ve ever used and the innovative PTH module is a great addition. Unfortunately, the high price means that these fabulous headphones will only be available to a select few, but if money really is no object for you, you won’t be disappointed.