While Sharp may be pinning its LCD reputation on its new fancy high-spec models, which we’ll be reviewing in due course, it hasn’t forgotten that still, for the majority of TV punters, price is king.


The proof? The brand’s LC32AD5E, a 32in LCD TV that impressively manages to break the £400 barrier. But does it have anything other than price to commend it?


It doesn’t look cheap, at any rate. In fact, with its high-gloss black bezel and cute sculpting, complete with distinctive tapered-in speaker section, it couldn’t be much further away from the plasticky, often grey drabness usually found at this low-rent end of the market.


Connectivity, meanwhile, while certainly nothing special, also has everything you could reasonably expect a £400 TV to provide. Which is to say you get two v1.2 HDMIs, a component video input, a D-Sub PC option, plus SCART and composite video standard definition options. It’s quite a nice little touch to discover that the LC32AD5E’s connections are hidden underneath a cover that helps keep the TV’s rear end a bit tidier once everything is hooked up. 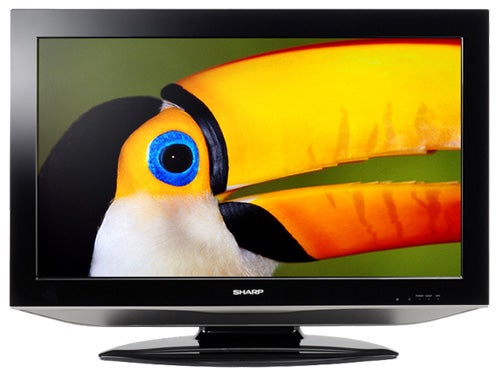 However, the first sign of trouble comes with the LC32AD5E’s onscreen menu system. For some reason Sharp has opted to use a really messy, unclear font that makes all the options pretty hard to read at times, especially if you’re sat any sort of distance away from the screen. Such a basic operational oversight is as frustrating as it is hard to explain given that surely somebody somewhere must have spent lots of time with the TV during its development stages. At least the remote control is sensible in its organisation, but if anything that merely emphasises the frustrating menu presentation.


Surprisingly given the TV’s price, the features hidden inside its onscreen menus are reasonably plentiful. You get noise reduction and black level boosting possibilities for pictures, along with a film mode that adjusts the progressive scan processing depending on whether you’re watching video or film-based sources. Then there’s a series of picture presets based around specific source types, such as sport or games.


Of these picture features we’d particularly urge you to experiment with the film mode, as getting the wrong setting there can have a markedly negative impact on pictures by introducing judder and edge noise.


When it comes to audio, the LC32AD5E provides the seemingly inevitable pseudo surround sound mode, plus a Clear Voice feature that does exactly what it says on the tin; namely, make voices appear stronger in the mix.

It’s worth looking next at some of the TV’s specifications, as they’re rather revealing of just how Sharp has managed to make it so affordable. For instance, the set’s claimed contrast ratio is ‘just’ 1,200:1, revealing that unlike the vast majority of LCD TVs we see these days, the LC32AD5E does not have a dynamic contrast system whereby the backlight brightness can be dimmed automatically for better black level response when dark scenes are detected.


The native resolution, meanwhile, is an HD Ready 1,366 x 768, not the full HD 1,920 x 1,080 Sharp is introducing on a 32in model further up its range. Finally, the set doesn’t have any image processing beyond the film mode we’ve already mentioned. There’s certainly no sign of Sharp’s TruD picture engine.


As you might expect from these on-paper specs, compared with its more expensive siblings, the LC32AD5E’s performance is a little uninspiring. There are two main reasons we say this. First and foremost, colours have a nasty habit of going ‘off message’ tonally, especially during dark scenes. For instance, reds and skin tones tend to look a bit over-ripe, and some deep greens can look sickly. 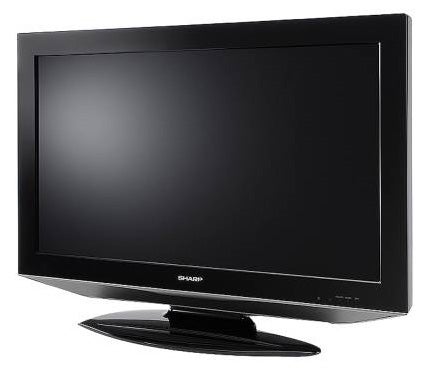 The other big problem we have is its viewing angle. Basically you don’t have to sit very far at all off to the TV’s side before the image starts to lose considerable amounts of contrast and colour saturation. So unless everyone in your household likely to be watching this set can sit pretty well right in front of it, it’s a non-starter. To be fair viewing angle problems like this are hardly rare in the LCD TV world, but we’ve definitely seen a number of recent 32in screens handle the problem better.


Initially we had a third problem with the LC32AD5E: its black levels. In its ‘out of the box state’, dark scenes were noticeably afflicted by a grey veil hanging over the blackest parts of the picture. However, we eventually managed to discern a manual backlight adjustment option (not an automatic one which, as we said earlier, could have boosted the set’s contrast ratio figure) amid the impenetrable onscreen menus. And nudging the backlight down to its -4 or -5 settings largely removed the greyness.


Naturally this also makes the picture less bright and so not well suited to rooms with a lot of ambient light. Plus it also means you lose a little shadow detailing. But the benefits in terms of extra dynamism and image depth for us outweighed the negatives.

More definite and less controversial strengths of the LC32AD5E’s pictures include colours that at least try to atone for their occasional tonal deficiencies by being fulsomely saturated and vibrant.


Also, you get to enjoy some impressive sharpness and detailing with HD sources. Once again we have proof that you really can appreciate ‘the HD difference’ even on a TV as small as 32 inches.


Actually the LC32AD5E also shows standard definition pictures with surprising crispness considering that there’s precious little high-level image processing going on. And it does no harm at all to this general sense of clarity that the set also suffers less with LCD’s motion smearing problem than most sets at the sub-£500 level. 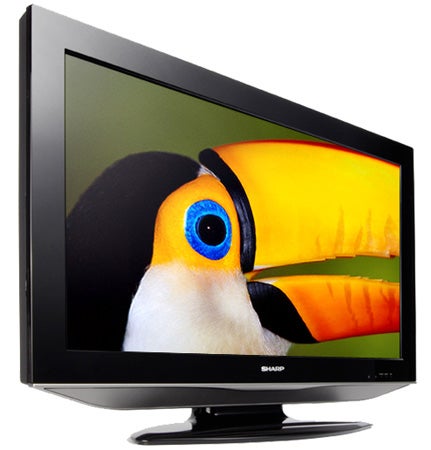 The decent pictures are partnered by equally decent audio, too. Treble effects are presented with clarity and help create a good sense of width to the soundstage; the mid-range is reasonably uncompressed allowing voices to stay rounded and clear even during action scenes; and there’s even a little punchy bass on hand to underpin proceedings.


There are certainly one or two tell-tale signs in the LC32AD5E’s performance that reveal its budget status, and you have to be careful how you set it up if you want to get the best out of it. But its imperfections certainly aren’t big enough to stop it from outperforming the majority of its price-based rivals by quite a comfortable margin.