As I start this review today, it occurs to me that I really am turning into a cynical old git.


You see, all the press information Sharp has disseminated on the 46DH77E has made much of the TV’s ‘green’ credentials, most notably the fact that it’s the first TV ever to feature a dedicated ‘Eco’ button on the remote control. Yet I can’t help but think every time I hear a TV brand pushing its planet-saving credentials that it almost always sounds more like a marketing exercise than a heart-felt plea on behalf of Mother Nature and her troubled ozone layer.


Also giving me an attack of the Victor Meldrews is that fact that the actual Eco button function isn’t all that earth-shattering when you get down to it. For all it does is provide instant access to the set’s Energy Save mode, which does nothing more profound than reduce the screen’s backlight output by 20% or 30%, depending on whether you choose a Mid or High setting.


Then there’s the fact that I can’t help but wonder just how much – or more likely, how little – power this sort of subtle backlight reduction will really save. And finally in my cynical world, I find it a little hard to be completely convinced of Sharp’s dedication to the green cause when the 46DH77E ships with one of the thickest multi-lingual paper manuals I’ve seen. Apparently, the green message doesn’t extend to saving humble trees! 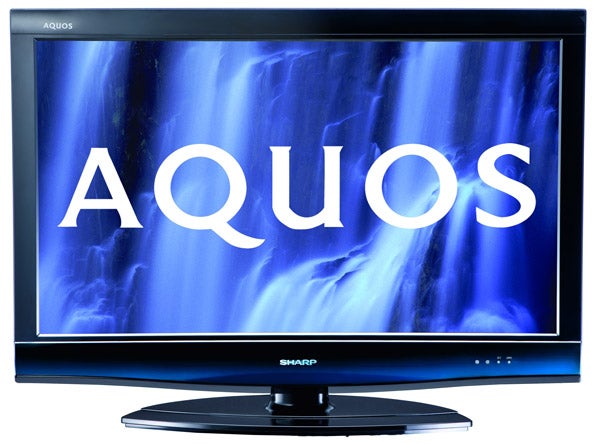 To be fair, as I openly admitted at the start of this review, I’m probably being harsh here. For I guess any TV that makes any moves in a green direction, however small, ought to be commended for its efforts rather than chastised. I guess it’s only fair to recall, too, that Sharp has regularly set new standards for reduced TV power consumption; indeed, the brand was the first to earn the Euro Flower environmental commendation for a TV from the EU European Commission.


I also guess that while the energy saving efforts of just one TV might not amount to much in my miserable mind, add up the total energy saved by potentially millions of Eco TVs and you might actually achieve something significant.


Finally, I suppose it’s feasible that the instant access to the backlight reduction system afforded by the Eco button might a) save valuable energy-consuming time as you avoid the usual trawl through the onscreen menus for the TV’s Eco features and b) simply regularly remind you that you could be running your TV more efficiently.


Anyway, I’ll quit my bitching now and leave you to make your own minds up about how much you care about the 46DH77E’s Eco functionality. Though in true miserable bastard style, I’m determined to get the last word in by adding a parting shot. So, in the interests of reminding users of the green potential of the TV, it might have been nice if the all-important Eco button had been made more obvious on the remote, either by a clearer label or a more prominent position. Bah, humbug.

Settling into more prosaic matters, it has to be said that the 46in 46DH77E is quite a looker. Its bezel looks glossy, is subtly styled, and feels startlingly robust, for a start. But the best thing is the gently triangular shape created along its bottom edge, and the subtle shade of blue that’s been infused into the screen frame.


The 46DH77E’s connections are a mixed bag. On the downside, there are only three HDMIs when we’re increasingly expecting range-topping TVs like this one to deliver four. But in the plus column the DH77E has a dedicated D-Sub PC port, an RS-232 control port to aid system integration, and – for the first time on a Sharp TV, I think – a USB port able to play JPEG or MP3 files. 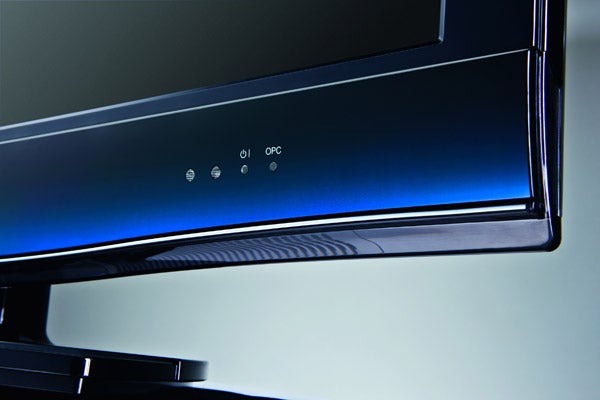 I couldn’t help but think Sharp might have flexed its multimedia muscles a little more, maybe by adding a PC-compatible Ethernet port, given how many other brands are thinking outside the box with their multimedia options these days. But that’s probably just me being that curmudgeonly old git again.


Turning to other features beyond the aforementioned Eco mode, there are two further green touches; namely, a Low Power Standby system and an ‘OPC’ mode that adjusts the image’s brightness in relation to the amount of ambient light detected in your room.


You can tweak the backlight output manually, too, as well as fine-tuning colours courtesy of hue and saturation adjustments for the red, green, yellow, cyan, magenta and blue image components.


The 100Hz processing can be turned on or off as you wish, meanwhile, as can the set’s Active Contrast system (where the TV adjusts the backlight output in response to the darkness content of the picture). 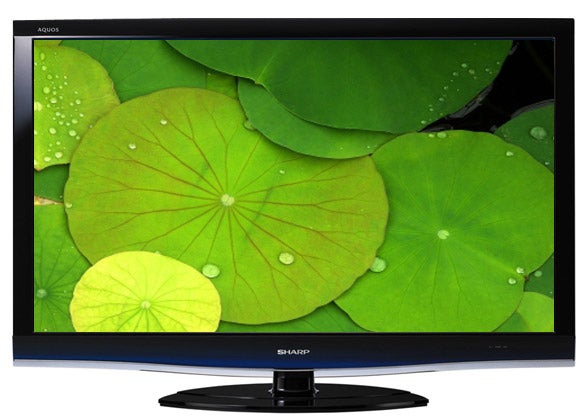 Finally, there’s a Film mode for optimising playback of 24/25p sources, a Clear Voice audio mode for highlighting vocals in a mix, and the rather cool ability to automatically recognise what devices are connected to the HDMIs – PS3, Xbox 360, PVR etc – and then label its inputs accordingly.


The 46DH77E’s picture performance reveals itself to be a chip off the old Sharp block. A fact that has both positive and negative connotations.


Chief among the TV’s ‘hits’ is its occasionally breathtaking HD sharpness. The amount of detailing and texturing revealed from the Blu-ray of ”No Country For Old Men”, for instance, helps produce a visual intensity and sense of solidity that I’ve only rarely witnessed before. So long, at least, as you make sure you’ve got the set’s noise reduction systems turned off and the aspect ratio set to Dot By Dot.


It’s pleasing to report, too, that this HD sharpness isn’t marred by as much motion blur as is common in the LCD world, clearly revealing that the generally good results noted with Sharp’s previous 100Hz generation continue.


I should say here that although motion is largely free of blur and resolution loss, it doesn’t look as fluid and free of judder (especially during camera pans) as it does on more processing-heavy TVs like Philips’ Perfect Pixel Engine or Panasonic’s Intelligent Frame Creation models. But then the 46DH77E’s subtler enhancements are tellingly made while generating fewer unwanted side effects – just the very occasional marginal twitch or edge shimmer.


Finally, in the plus column, black levels are consistent right across the screen, and just about good enough to leave dark film scenes like the classic hotel/street shootout in ”No Country For Old men” looking perfectly watchable and engaging.


Having praised the 46DH77E’s black levels, though, they’re not without their flaws. For while, after careful calibration, there may be considerably less of the old blue-grey undertone to black colours that used to affect some previous Sharp TVs, I also sometimes felt that the TV wasn’t showing me all the shadow details in dark picture areas that I wanted to see.


Such dark areas thus look rather hollow, flattening the image out and making it look slightly unbalanced when you consider how well judged and dynamic the bright, colour-rich parts of the picture are. 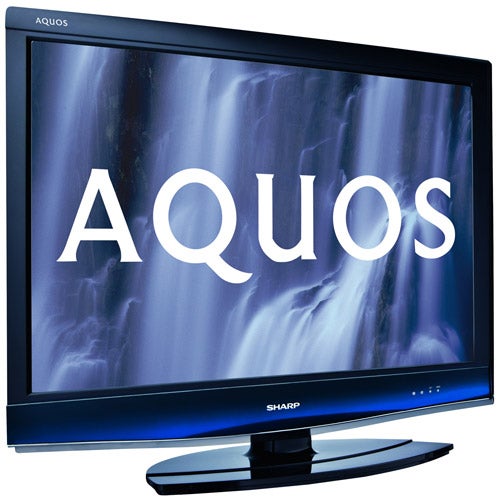 The 46DH77E also exhibits some – though not all – of Sharp’s familiar weaknesses when it comes to handling standard definition sources. The biggest of these problems concerns the set’s colour tones. For no matter what I tried, I just couldn’t get the standard definition colour palette to look totally convincing.


Skin tones are particularly problematic, often coming out orangey, pinky or a salmony combination of the two. For some reason the colourscape feels a little constrained, too, with the result that standard definition pictures sometimes look slightly monotone or even sepia-like, for want of a better description.


The 46DH77E’s standard def pictures are at least a bit crisper-looking than we’ve seen them on previous Sharp Full HD LCD TVs. And impressively this extra sharpness is joined by better suppression of source noise. But the colour concerns ultimately make the most lasting impression.


Also making a negative impression is the 46DH77E’s audio. I’m depressingly used to hearing precious little bass response from flat tellies, but the 46DH77E is an even worse culprit than usual. Explosions sound like pops from a toy cap gun, deep rumbles such as those emitted by the alien ship as it glides over the moon in ”Independence Day” are completely lost, and male vocals sound thin and unconvincing. The mid-range sounds cramped, too, when put under any sort of pressure, leaving voices sometimes all but obliterated in the mix. There’s not even much treble detailing around to inject some much-needed life and a sense of space into proceedings.


Not for the first time with a Sharp TV, while I’m happy to commend the 46DH77E as a good and, at just £764, startlingly affordable HD monitor, I’m sadly unable to give it more than the most cautious of nods as a living room all-rounder on account of its indifferent standard def performance and frankly shonky audio.