Back in 2002, Sony brought us a strange Japanese fantasy game called Ico. It received excellent reviews, was hailed as a next-generation masterpiece, and has since been acclaimed as one of the best games ever. And that all happened for good reason. Perhaps Ico leant heavily on the existing tropes of the platform puzzle game, but it did so with a style and atmosphere that few games have every matched. Its setting – a vast, gothic castle, it’s enormous, gloomy rooms and jagged ramparts – was an incredible piece of game architecture. Its characters – a courageous horned boy and a ghostly princess – had more soul and personality than just about any game characters I could mention, and the whole design was breathtaking. It was a wonderful piece of stripped back storytelling and intelligent gameplay. When we talk about a game being beautiful, we normally mean it looks superb. Ico makes a mockery of that sort of careless hyperbole. It’s as close as games get to works of art. 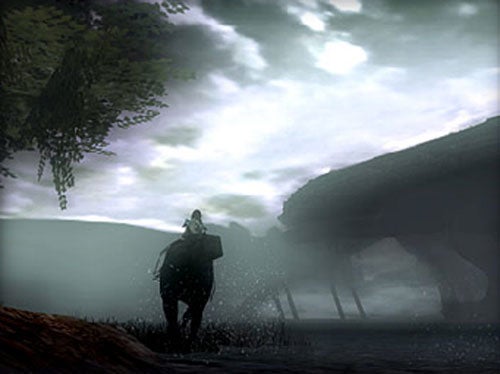 The problem is that Ico’s reputation has left Shadow of the Colossus with a huge weight of expectation resting on it. It’s a standard bearer for alternative, arty gaming. Gamers in some circles need it to be a flawless, polished classic – a game that can carry its considerable ambitions to their limits and triumph. And these people won’t be bitterly disappointed by the finished result. Shadow of the Colossus is incredible. It does try to do things that no other game has ever done before, and it succeeds more often than you might think. Artistically, it’s everything its predecessor was; a unique, gorgeous looking experience that can evoke such a real sense of wonder.


But as a game – as an article designed to entertain – it sometimes falls a little flat. 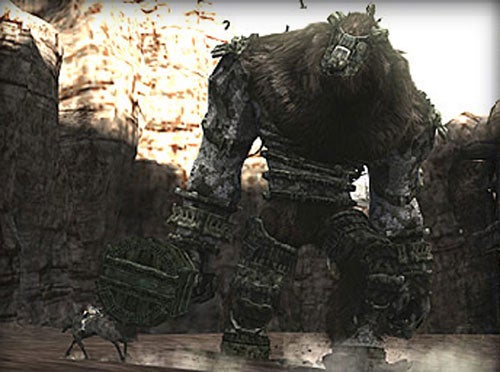 To talk about why, we need to go back to the basic concept. A young warrior enters a strange land on horseback. He carries what looks like a sleeping, dead or dying girl. He takes the girl to an ancient, ruined temple, where he lays her down on an altar. Perhaps his desire is to bring her back to life. If so, under instructions from a strange voice from the sky, he must travel the land and destroy 16 colossi. Why? We don’t know. What purpose or threat do the colossi serve or pose? Again, we don’t know. All we do know, is that the warrior can find the colossi by focusing light from his shining blade, and that – while seemingly indestructible – each can be killed by finding and stabbing its hidden weak points. 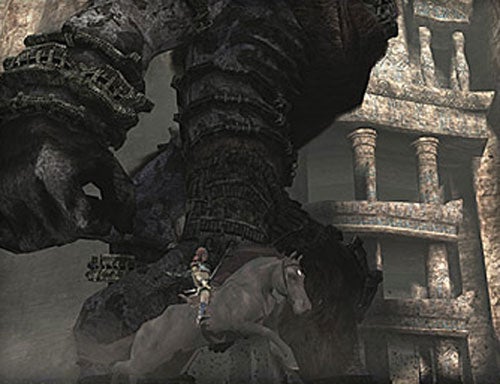 
Why? Firstly, because the land itself is one you’ll want to explore. It’s a world of lush, grassy plains, vast canyons, raw deserts, misty lakes and crystal rivers, with murky forests pierced by sunbeams and caves that open up to reveal a hidden waterfall tumbling from a sun-dappled lake. And this world is peppered with the strange ruins of a lost civilisation; tombs, towers, buildings, shrines. And, eerily – apart from your horse or the odd gliding hawk and creeping lizard – you’re the only living thing for miles around. Riding around on your beautifully animated, headstrong steed, you don’t really need any more reason to wander. What’s more, the lighting – like Ico’s before it – has a voluminous, physical quality that just makes you want to mouth “wow.” Like God of War, Burnout Revenge or Criterion’s upcoming Black, it proves the PS2 can still make your jaw slack with amazement. 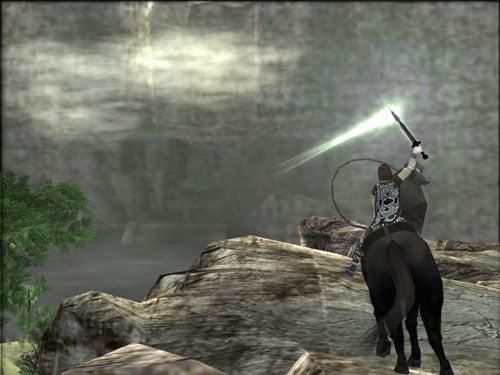 But if you want to save the girl, you’re going to have to find the colossi. This isn’t always an easy business, particularly as your guiding light needs sunlight to work, but the wait is always worthwhile. Because, once the colossi are discovered and awakened, the game goes up a gear from just amazement to sheer, dumbstruck awe. These are enormous, monumental beings, part animal, part mineral, part monster. These walking marvels of an ancient world aren’t just impressive in terms of size, but also in the detail that has gone into their construction. As they stride, fly or swim towards your suddenly feeble-looking hero, huge stone ramparts protruding from a scaly back, patches of moss and thick fur on their front, it’s hard not to feel a shiver that’s equal parts terror and wonderment. 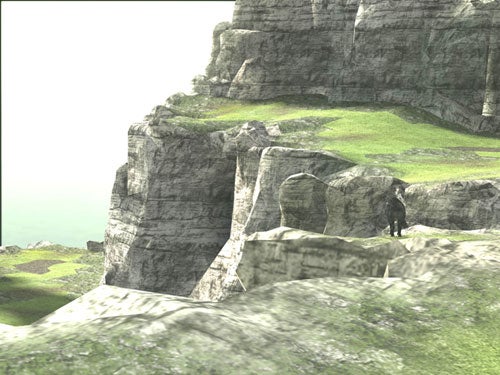 And it’s these battles that bring us to everything that is best about the game, but also everything that is worst. Each colossus has one or more weak points, usually on the head or in an inaccessible spot. As dispatching the colossus requires stabbing this weak point several times, your first job is to find some way of getting on – not an easy job when the thing is threatening to crush you, flying fifty feet above you, or swimming towards you with unseemly haste. In effect, this bit is a puzzle. How do you exploit the behaviour of the colossus or the features of the landscape so you can get a crack in at its ‘Achilles heel’? Work that out, and it’s on with part two: clambering up the colossus to deliver the blows. Luckily, by using the R1 button to grab, you can hold on to protrusions or furry surfaces – at least until your stamina wears out. Finally, you reach the target point, pull back your sword, and strike. Do this enough and the colossus dies, then it’s back to base and time for some cryptic clues on the next target. 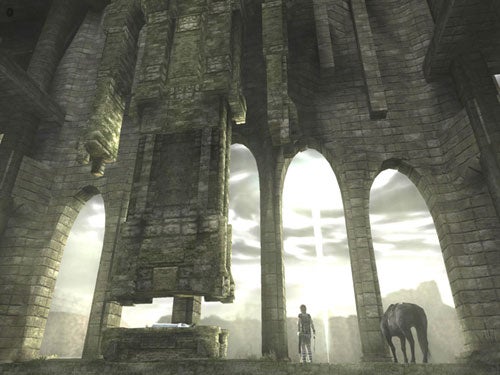 If it sounds mechanical, then it is slightly. All the same, it’s impossible to describe how big a thrill it is to race up the gigantic beast, scramble for purchase as it desperately tries to throw you, then strike the killing blow. It’s unbelievable, and the sense of achievement when the big guy goes down is particularly satisfying. 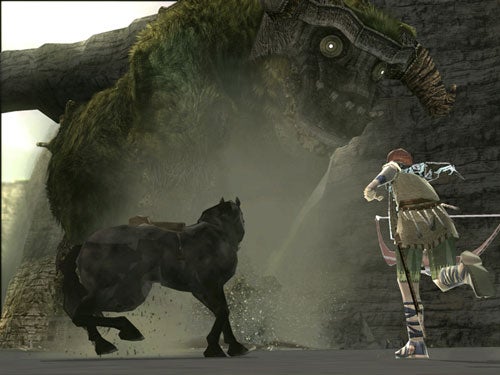 But at the same time, you are effectively fighting a series of boss battles. And what do these boss battles have in common with most boss battles? If they’re not too easy, then they’re usually frustrating; a fact that isn’t helped by the fact that the initial stage – getting onto the colossus – frequently requires several tricky feats to be accomplished in a set order. To do this, then fall off the colossus and have to do it all over again isn’t always – sorry, guys – that much fun.


In fact, when falling off means you have to run or swim for about three minutes then go through the sequence, it’s even less fun. And that’s the real problem here – there were too many moments when playing Shadow of the Colossus where I stopped and thought “Am I really enjoying this?” and answered “Well, kind of.” When the colossus goes down, am I thinking “Hurrah, what a triumph” or “Hurrah, thank goodness that battle is over. I won’t have to go through that whole bloody rigmarole again.” When a game puts in boss battles to spice up the regular gameplay, that’s not a real issue. When a game IS the boss battles, it is. 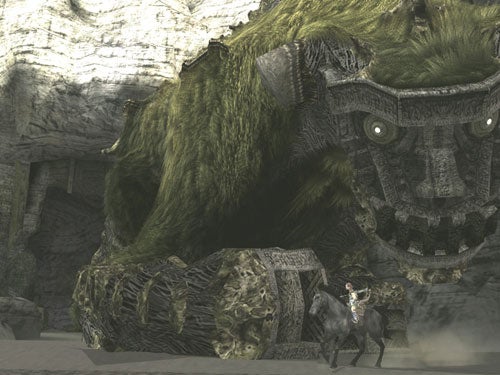 And while I’m grumbling, the frame rate isn’t always perfect, there are some obvious signs of the textures swapping in, and the music – sweeping and magnificent as it is – has a horrible way of cutting out and restarting in the middle of the battle. This hardly spoilt the experience, but when we’re talking about a game that some believe is the greatest ever, it probably ought to be mentioned.


Still, remember how I said the backlash nearly starts here? Well, that “nearly” is really very important. While I can’t agree that this is one of the best games of any kind on any platform of all time ever, it is one I’m glad I’ve experienced, and one that I think you ought to too. In some ways, those who describe it as an ‘arthouse game’ couldn’t be more right – it isn’t flawless, it is demanding, it takes a lot out of you and there are times when it isn’t even that enjoyable, but Shadow of the Colossus has something that other games lack. While it hasn’t got Ico’s warmth or emotional power, it has magic, mythical force, and a unique, storytelling strength. You might not always love it, but there’s nothing mediocre or forgettable about it. 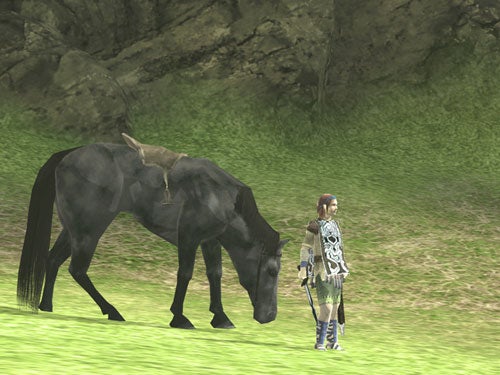 So, this isn’t a backlash, nor is Shadow of the Colossus a sacred cow that’s ready to be dragged off for slaughter. As long as you’re aware that it’s not perfect, and that it is going to be tough going at times, it’s a gaming experience to savour.


A demanding and even frustrating game, but one with a scale and majesty you can’t ignore. If you love games, it’s pretty much essential.