Installed, cleaned and run-in the Servis was loaded up with a variety of dirty kitchen cookware and plates. The pull out top tray proved really useful for large kitchen utensils, although we definitely had to raise the upper basket to fit in plates over 24cm and up to 29cm on the bottom basket. The basket features did cause a little ‘too much choice’ confusion to start with but later, after a few loads, we had settled on a configuration that worked well for us.

We included a range of standard test items in the first main Auto wash, including dried on Weetabix and milk in a ceramic bowl, scrambled egg in the Pyrex dish used to cook the egg and red wine dried into a greasy wine glass. We used a leading brand triple action dishwasher tablet for all tests. We ran two complete cycles, a fully loaded dirty wash with the Auto Normal programme and the same fully loaded wash in the Servis’ Eco 50 cycle.

Our test wine glass actually ended up in the lower basket due to height restriction in the upper but that didn’t stop the Servis from doing its job. The glass was thoroughly cleaned of wine and grease and was left well-polished. The compartment itself remained damp and dripping in some places, although most of the washing load itself was effectively dried. As the glass was standing perfectly upside down, there was a little pool of water in the inverted base, which rolled down the glass when we unloaded. 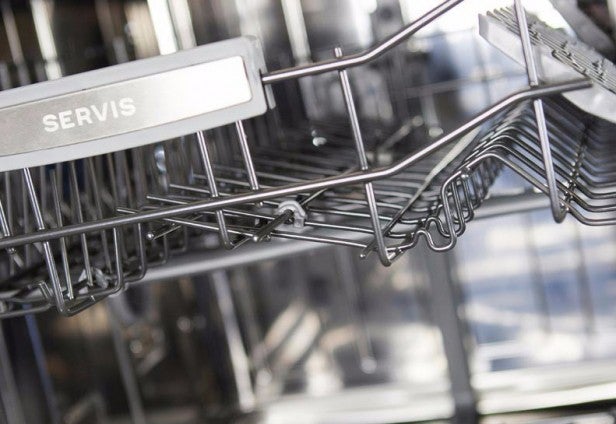 The bowl with Weetabix dried to its concrete like consistence having been soaked in milk first was cleaned very well considering the full cycle was only just over an hour and three quarters. It often takes a longer soaking to remove this mix. The scrambled egg hung in there with more tenacity with a complete ring of particles left around the cooking line. This is about average for a mid-price dishwasher and we would not expect any model to remove this high-protein stain completely.

The Eco 50 wash took considerably longer at over three hours. Drying results were very similar to the main wash with some moisture on the walls of the cabinet, although the load was predominantly dry. Several cups needed a light dusting with the tea-towel before we could put them away. Unsurprisingly, given the A rating, it did use a whole lot less electricity than the Auto Normal cycle.

The Servis is another high-tech dishwasher that has a turbidity sensor – a type of sensor that measures water clarity. This means it will use more water and electricity if your load is dirtier and less if it’s quite clean. This makes defining an accurate annual consumption and running costs a bit of a guestimate. 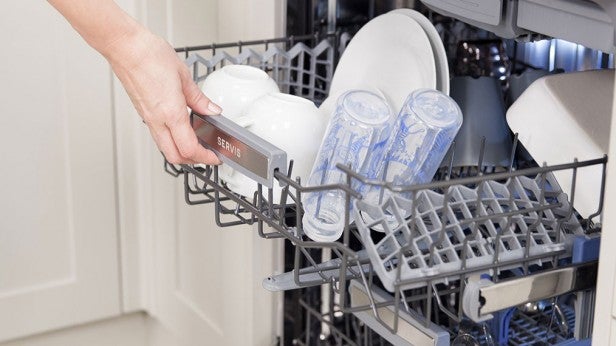 It’s worth considering if you want a big, good-looking dishwasher for less. It’s a particularly good choice for flats with open plan kitchens and living rooms because it’s so quiet – one of the quietest we’ve tested. It washes on par to other models, too, and is very cheap to run.

It falls down slightly on drying, which is best described as ‘good for a cheap machine’. Some cups need a quick going over with a tea towel before putting them away, and moisture is left on the walls of the machine. We can accept this somewhat on a cheaper machine, but we’ve seen better.

We haven’t reviewed many more machines at this price yet, but you can read our dishwasher reviews for more options.