Here’s a recipe that has served Nintendo well in the past: take a popular video game character (e.g. Mario) and an equally popular sport (e.g. footie, tennis or golf), throw in a bunch of buddies (e.g. Bowser, Luigi, Yoshi and the rest) add special powers and serve it up to an adoring public. Even if the final dish has been less than amazing at times, you can still see why it strikes a chord with the family market. Sega Superstars Tennis, however, is a different kettle of fish. While the premise is basically the same, the fact that it comes from the same team that bought us last year’s Virtua Tennis 3 – currently the best tennis game on any system – instantly raises expectations. What’s more, it’s a game designed with not just kids but long-term Sega fans in mind, pulling in settings and characters from popular Sega titles of the Mega Drive and Dreamcast eras, and combining it all in one (hopefully) irresistible package. 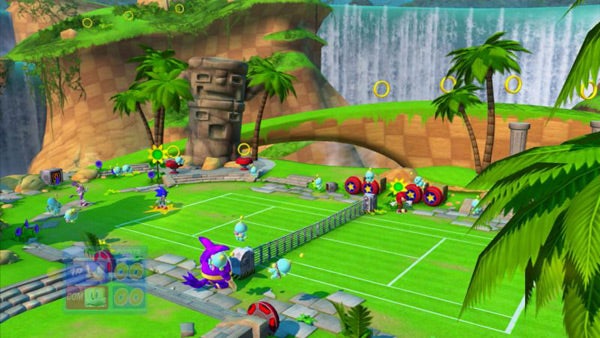 All the same, Sega Superstars Tennis is less of a repackaging of VT3 than you might expect. Out goes the career mode, in comes a compendium of mini-games and tournaments based on Sonic, Super Monkey Ball, Samba de Amigo, House of the Dead, Jet Set Radio, Space Channel 5 and many more. Each world gives you a series of missions – either a mini-game to complete or a match or tournament to win – and by running through these you unlock new missions, new music, new characters and, finally, new worlds. It’s a simple structure, packed with rewards and giving you new challenges as you play.


As always, the mini-games themselves are a mixed bunch. Whacking balls at zombies in the House of the Dead world is fun, particularly once the game throws in power-up balls that explode on impact or split into three when hit (don’t worry, mums and dads, as the gore level is kept to an absolute minimum). Hitting balls through gates in the Super Monkey Ball world is rather less enjoyable, though I’ve yet to come across any mini-game that I’d really describe as tedious or totally broken. The highlight is probably the Virtua Cop section, as you blast away targets using a racket and ball, not a shotgun, but overall the standard is reasonably high. 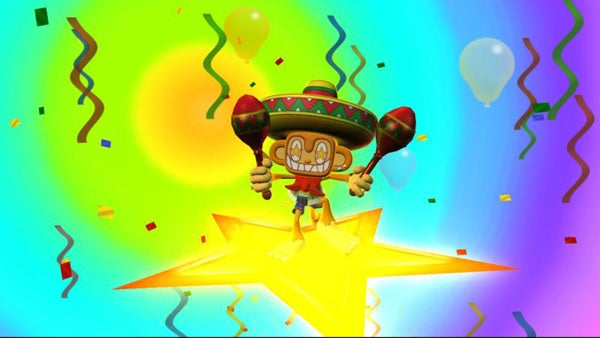 The actual tennis, meanwhile, is roughly what you’d expect from the guys behind Virtua Tennis 3. The basic controls are extremely easy to pick up but it takes a while before you really get a feel for the different shots and angles, and simply hanging on the backline is a surefire way to lose once you progress beyond the most basic level tournaments. The biggest change from Virtua Tennis 3 is that the characters have very clearly defined strengths and weaknesses (Sonic’s is speed, but Amigo has a bit more power) and that each has his or her own special move. Through good play you can charge up the star underneath your player’s feet then, once you’ve maxed it out, unleash a temporary power-up that has you hitting the ball in weird or unpredictable patterns.

My major concern at first was that these power ups would totally unbalance the game, but with time you realise that the ball will eventually arrive where you expect it, and the patterns can be learnt with time. The only way the special moves will annoy you is that certain characters can summon obstacles or hostile characters that will appear on your side of the court, which can be infuriating when they knock you down or block your path to the ball. You may end up hating matches with the Jet Set Radio crew or Space Channel 5’s Ulala for exactly this reason. 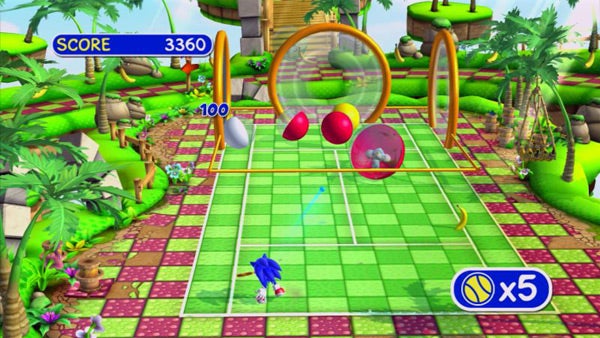 Now we come to the crunch. If you’re simply looking for a great tennis game there’s no doubt that Virtua Tennis 3 is still the better choice. It has the longer and deeper career mode, more sophisticated AI, more immediately impressive graphics and plays a slightly tighter game overall. What makes Sega Superstars Tennis special is a) that it has more kiddie appeal for those of us with families and b) that you can unlock such obscure Sega stars as Ulala or Alex Kidd if you’re a Sega nut. Heck, I’d prefer to play VT3 myself, but I’m not a pre-teen or a fully signed-up member of the Blue, Blue Sky brigade. All the same, I should note one word of warning. While anyone who has sunk hours into VT3 will find Sega Superstars Tennis a mite too easy, other players – particularly younger ones – will find it very challenging at times. I’m not sure how many people will sit in the middle ground in-between. All I’d say is that I’ve yet to come up against anything that couldn’t be beaten with a little hard work, and I’m certainly no Virtua Tennis god. 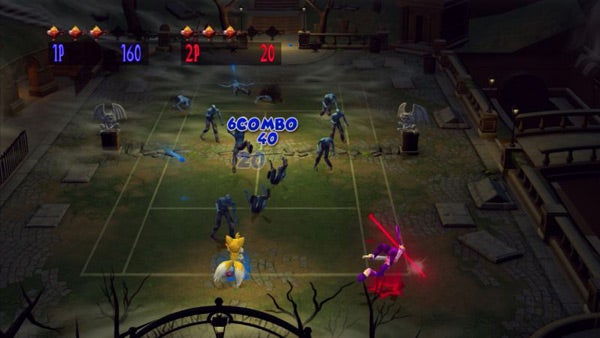 Those of you with both an Xbox 360 or PS3 and a Wii will also have a difficult decision to make. On the one hand, the cartoon graphics on the high-end consoles are clearly more impressive, not just thanks to the usual HD crispness, but also because extra lighting and surface effects and background details make the experience that much richer. You might not think it would affect a cutesy cartoon game, but look at the all the activity in the background of the Samba di Amigo levels and you’ll be surprised what you’ll see in the 360 game. On the other hand, the 360 version suffers from some painful loading times (I haven’t seen the PS3 version, though I’d bet it’s not much different). 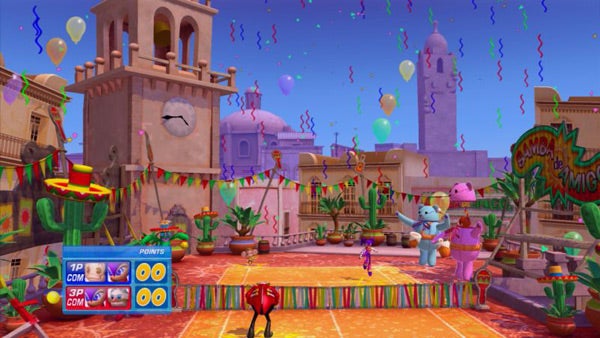 What’s more the Wii offers a choice of three control systems: a standard system using the remote held horizontally or the classic controller; a Wii Sports tennis like system that uses the motion sensitive controller, and a hybrid system that uses the nunchuck to move and the remote to whack the ball. The first isn’t all that satisfactory if all you have is the Wii remote, while the latter takes an awful lot of getting used to. The Wii Sports system is great, and will delight any members of your family who are already used to Wii Sports. However, it’s not available during the mini-games, so you’ll be forced to use the standard configuration instead. The upshot of this is that the Wii version is the better family-friendly party game: just fire up a multiplayer tournament and you’re away. However, the 360 version makes for a better single-player experience and gives you the benefit of online play as well. 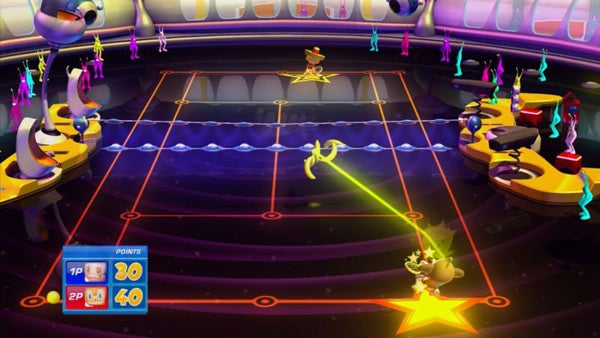 Looking elsewhere I note that a lot of people have been fairly grumpy about Sega Superstars Tennis, mostly because they feel it compares poorly to Virtua Tennis 3 as a single player game. For me, that’s a bit of a non-issue – compare it to other family sports games and it’s well ahead of the pack. Give me a choice between this and Sonic and Mario at the Olympic Games and I know which one I’d rather play. More importantly, it’s the sort of game that I’d happily recommend to anyone who wants a game they can enjoy with the family while still have something worth playing on their own, and a must for anyone who’s looking for a more feature-packed alternative to the tennis game in Wii Sports. If that means you, then buy away. It’s not quite as addictive or rewarding long-term as VT3, but Sega is still serving aces when it comes to family-friendly fun.


Don’t expect the depth of Virtua Tennis 3 and you’ll find one of the best family sports games around. Thoroughly enjoyable and a must for anyone with rose-tinted memories of the Dreamcast years.