Let’s get the tough stuff out of the way. Would the absence of any or all of the following in an off-road racing game instantly put you off, no matter how attractive or entertaining the game might otherwise be: 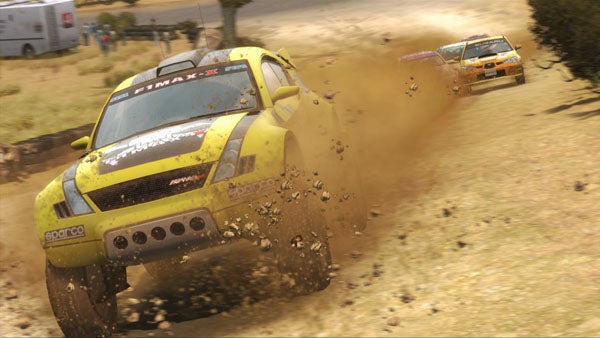 If the answer is yes, forget Sega Rally – it’s only going to annoy you. If you found Colin McRae: DiRT’s dismissal of ‘proper’ rally racing in favour of a range of competitive off-road events disappointing, then Sega Rally is going to make you grind your teeth with rage. At least DiRT’s events were grounded in reality. As the title suggests, this is the original rally racer returning to its roots, and those roots are arcade through and through. It’s telling that the title it’s closest to in spirit isn’t DiRT or even Sony’s Motorstorm, but Namco’s Ridge Racers 6 and 7. 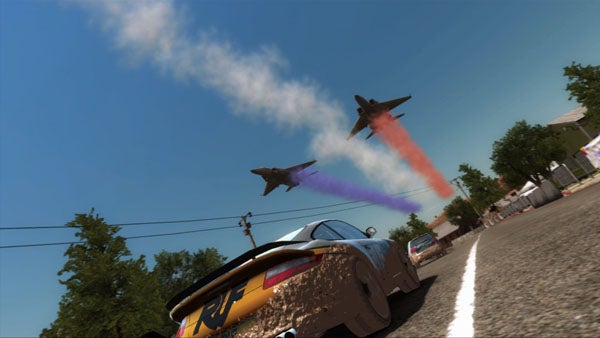 Like the last two Ridge Racers, it’s a deliberate attempt to shake off the baggage that the racing genre has accumulated over the last ten years or so and return to the fundamentals of high-speed competition, aggressive, gutsy driving and lavish trackside spectacle that used to have us queuing up in the arcades. And just as Ridge Racer 6 showed that Namco had stopped trying to out-do Gran Turismo and rediscovered the joys of the old house style, so Sega Rally is based in a real understanding of the visual appeal of Sega’s classic racers. 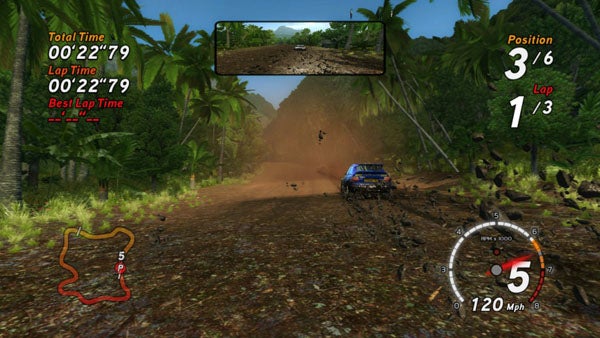 Based in the UK, Sega Racing Studios has managed to update Sega Rally without losing any of its old charms. It has bright, blue skies, lush green jungles, and safari stages with elephants in the background. It has dazzling waterfalls, crisp alpine scenery and show-off fly-bys by helicopters, gliders and aerobatic teams. It has glorious plunges through mud-soaked river beds, but also glorious climbs out of flower-strewn mountain valleys. If other off-road racers have spent the last few years trying to capture reality, Sega Rally makes a convincing argument that reality is over-rated, and that you can dish out a lot more eye-candy if you simply take elements from the real world then put them together as you see fit. That way you don’t just get tracks that are full of lovely turns, tricky surfaces and challenging corners, you also get all the most spectacular bits of your chosen environments without any of the duff stuff in-between.

However, while Sega Rally is very much a purist arcade racer, it’s not afraid to take what it can from the simulation school. For a start, it has a strong selection of real cars to choose from, including favourite rally models (the Subaru Impreza, the Mitsubishi Lancer), old classics (the old-school Ford Focus, The Lancia Stratos), new or strange contenders (Mitsubishi Concept-X, McRae Enduro, Hummer H3) and modified production models (VW Golf, Toyota Celica VVTi, Fiat Grande Punto Rally). Many of these need to be unlocked in the main championship mode before you can drive them, but you certainly can’t complain that you’re not getting your money’s worth of vehicles. More importantly, each one handles in a reasonably recognisable fashion. Sega Rally might not do realistic vehicle simulation, but once you get used to the slightly idiosyncratic way it plays, then you’ll find that the differences between, say, the Impreza and the Skoda Fabia Rally play out roughly as you might expect. 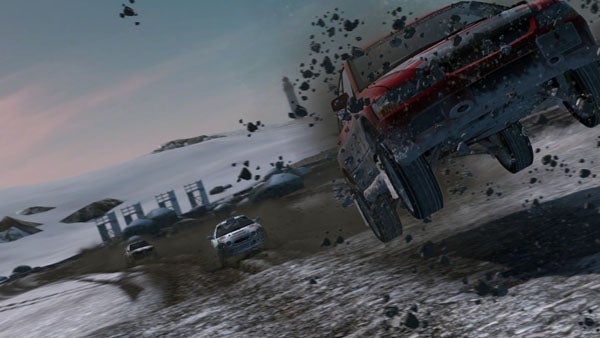 Oh, yes, erm, well, the handling. Speaking as a fan, it still must be said that Sega Rally takes a little getting used to. At first, the cars seem to slide around everywhere, and merely keeping them going in a straight direction feels like a bit of a challenge. After a few miserable races where the idea of winning seems utterly implausible, three things become apparent. First, you need to be gentle; tugging the analogue stick hard left and hard right is not going to get you very far at all. Second, the side of the track is not your enemy, but your friend. Without any car damage to worry about, sliding the back of the car into the barrier (or a rival racer) isn’t going to slow you down too much, and it can actually save your bacon on some corners. Finally, this isn’t a game of stopping distances and carefully mapped out corners; it’s a game of shameless, super-charged, seat of the pants racing. Brake when it’s not absolutely necessary, and you’ll lose your position. Wuss-out on the hairpins or neglect to keep your finger down on the accelerator until the very last minute, and your chances of winning a race are almost nil. If you’re not prepared to drive like a demon, the race will be won by someone else who is. 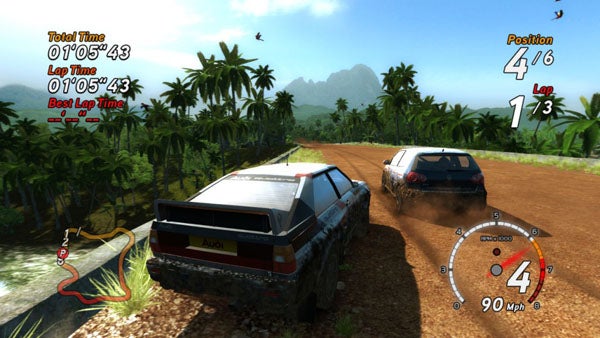 After years of racing castrated computer-controlled opponents, the AI here seems surprisingly aggressive. In some recent racers I’ve been able to grab pole position on the first lap – at least during the early stages – and, providing I don’t make any mistakes, cruise my way to victory every time. In Sega Rally, I’ve found myself fighting tooth and nail for fifth place on more than one occasion, and getting a first place in the intermediate and expert championship races really is a victory to savour. Often, you have to work your way steadily through the places, making the most of each overtaking opportunity then hoping you can maintain enough speed to keep your rivals stuck behind you. It’s tough, but it’s also fair, and when you do come a-cropper and fall from second to fourth, there’s usually nobody to blame but yourself.

Combine the stunning track design, the fierce competition and a superb sense of speed and you would already have the a contender for the best arcade racer of the year, but Sega Rally still has something else up its sleeve. You see, Motorstorm has a new rival when it comes to mud-slinging antics. Like Evolution’s Monument Valley racer, Sega Rally features deformable track surfaces, and this time the tracks and ruts persist from lap to lap. This feature isn’t quite as important to gameplay as some early impressions might have made out, but there are definite advantages to, say, riding along in the firmer ground that someone’s tyres have already stamped down. Meanwhile, the mud splattered over every surface of your vehicle seems almost tangible, thanks mostly to some clever use of bump-mapping and specular lighting. 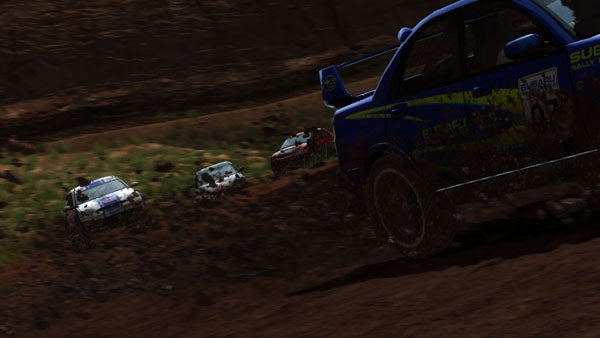 Not everyone is going to love this game, but if you enjoyed the recent Ridge Racers, Need for Speeds or Burnouts then there’s a very good chance that you will. What quibbles there are are pretty minor. It’s an irritation, for example, that you can’t change tyres between races in a championship, particularly when the faster road tyres might be essential to get a high place in two of three races but the grippy off-road tyres make life a lot easier in the third. A restart option in championship races would also lessen the stress levels a little; in a game this tough it’s annoying to come first or second in the first two races then fluff up the first lap of the third, then realise that you’ve thrown the whole championship away. On the PS3, the Sixaxis tilt control option is also shockingly rubbish (though to be fair you could say the same of Motorstorm.) 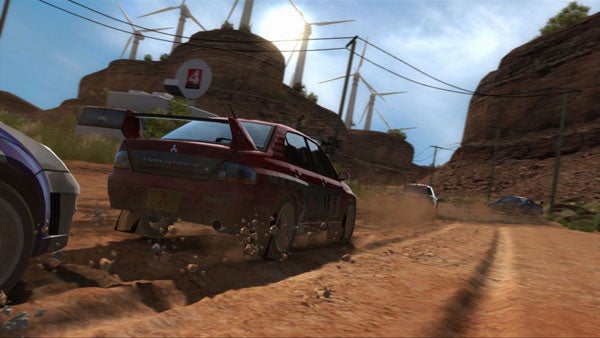 The biggest downsize I expected was that, long-term, the game might grow stale or lack content, but actually it doesn’t seem to be a problem. The game has three sets of championships to get through, each containing several ranked groups of events, with three tracks for each of the five environments – safari, arctic, alpine, tropical and canyon – plus reverse options. What’s more, each championship takes a lot of time and concentration to get through, ensuring this is a game you won’t be screaming through as you might have done, say, Burnout 4. On top of this, there are competitive online time trials where you can download ghost cars from your rival racers, and Sega Rally also outdoes DiRT by having a proper six-player online racing mode. 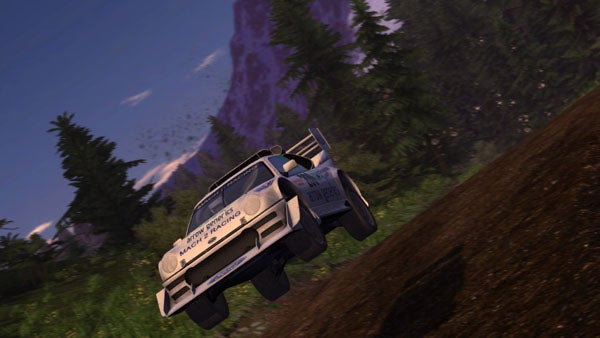 OK, the big question – where does Sega Rally sit in what has been a great year for off-road racers? Well, DiRT has more variety, slightly better visuals and will appeal slightly more to those looking for a simulation, but it’s not as thrilling an experience and the different off-road motorsports presented are a bit of a mixed bag. Motorstorm is still, second-by-second, the most intense and exhilariting racing game of the year, but it can’t match Sega Rally for long-term appeal or the variety and imagination of its settings and track design. In a perfect world I’d suggest you bought all three, but in this one you might have to make a choice. If so, I’d say that Sega Rally probably offers the most consistently great racing of any racing game I’ve played this year. As long as you’re not looking for an in-depth simulation, you won’t be disappointed.


Sega Rally rediscovers its roots in a glorious update of an arcade classic. Simultaneously retro and modern, it’s a perfect mix of speed, spectacle and hardcore competition.