Devices for getting your multimedia files to play on your TV come in all sorts of shapes and sizes, from full-on media PCs with PVR capabilities to slim-line network media players. However, if you don’t have a NAS box, don’t care about PVR capabilities, don’t want the hassle of setting up a media PC but ”do” want a small, low cost box that’ll play your files then there’s one standout device. The Western Digital WD TV HD media player makes the process as simple as possible – plug into TV, plug in USB stick, play files – and costs well under £100.


Based on the same principle as the Western Digital WD TV, the FreeAgent Theater is completely devoid of anything superfluous like a network port or an internal hard drive. Instead, you just plug in a USB storage device and use the box to play your media files back on your TV. 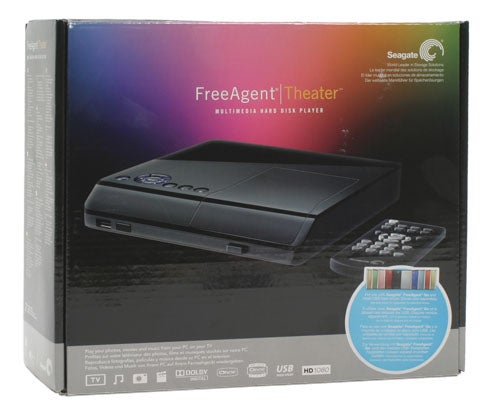 You see, this ”dock” is in fact just a FreeAgent Go shaped hole in the front of the Theater with a mini-USB plug tucked away at the back. Essentially, Seagate is trying to encourage buyers of the FreeAgent Theater to also buy a FreeAgent Go based on the premise that it’s easier and neater to plug your hard drive into a slot than use a cable. That’s all well and good but we don’t really see it convincing too many people – especially when the competition from Western Digital offers very similar functionality but without the extra bulk of the proprietary docking slot. The whole thing just seems incongruous. 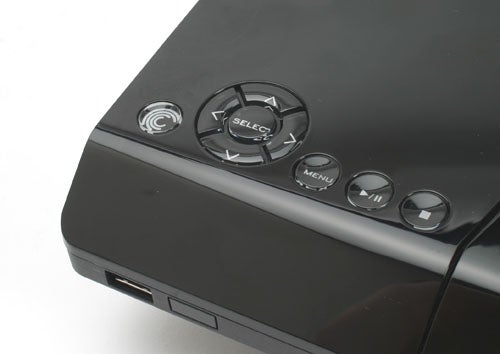 Despite this, the FreeAgent Theater is actually a very nice looking device with its glossy black top and matt black sides. In fact, we’d say it’s possibly a bit nicer than the WD TV. This assertion is bolstered by the Theater’s inclusion of full controls on the front of the player itself, rather than restricting control to the remote only.

Joining the docking port on the front is a USB socket and along side that is the sensor for the infrared remote. Meanwhile, round the back are the various video and audio connections. From left to right these consist of composite video, analogue stereo, S-Video, component video, and coaxial digital audio (bringing support for 5.1-channel surround sound). Of course, what’s missing here is an HDMI connection, which is something we’re in two minds about.

On the one hand this is an obvious omission simply from the fact it is now ubiquitous and is such a convenient connection, carrying, as it does, both video and audio on a single cable. On the other hand, as Seagate points out, component video can still carry HD video at up to 1080i resolutions, which is enough to enjoy the majority of the sort of content you’ll be watching on a device like this. It’s also a far more widely used connection that’s available on much older TVs. Ultimately, our take on it is that while we agree with Seagate’s arguments, we’d still prefer to have an HDMI connection as well.


Thankfully, the remote goes someway to bringing things back on track with its neat layout and tactile responsive buttons. It lacks backlighting but otherwise is completely up to scratch. 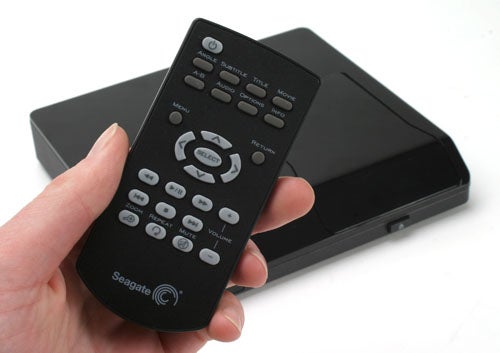 So on the hardware front, the Seagate FreeAgent Theater is something of a mixed bag but it’s with its software that things really take a turn for the worst.


Primarily this is because it doesn’t have the file format and encoding support of its biggest rivals. Its complete list of supported formats is as follows.


Most notable by their omission are .MOV and .MKV file formats and the h.264 codec, which essentially discounts a huge chunk of HD content. We’re also led to believe there’s limited scope for this being rectified via a firmware update. Nevertheless, most standard definition formats are supported and you can read full quality DVD rips straight from vob and iso files, which will save you some tedious transcoding.

Image format support that’s limited to just JPEG is also quite poor. In this day and age we’d expect at least GIF support and preferably TIFF and PNG as well. At least audio format support is a little more impressive, though there’s an obvious lack of any lossless formats in the list.

It’s not just the format support that is disappointing. Seagate has also implemented an underwhelming interface. It uses a simple system whereby along the top is an arrangement of four tabs; ‘music’, ‘video’, ‘photos’, and ‘all’, and by selecting a tab you correspondingly filter the contents of the screen below. While it looks perfectly nice, with its clean layout, it lacks some basic features. 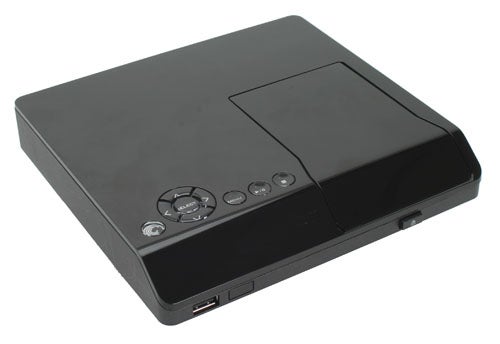 For a start, there’s no music library interface that scans your music files and organises them based on their tags. Instead, all navigation is done by just browsing back and forth through folders. Then there’s the ‘all’ tab. When selected it doesn’t actually show ”all” the files in that folder; just those that it can play, which can lead to some confusion as to whether you actually copied the files to the right location in the first place. Also, while we liked the idea of the preview pane for videos and photos, we found it somewhat frustrating to wait for the preview to load (which could take several seconds) before we could tell the player to start full-screen playback – if I know it’s the right file I want to be able to play it immediately!

Finally we come to the price and here the Seagate FreeAgent Theater can at least claim parity with the competition; both the Theater and Western Digital WD TV are available for around £80.


Seagate’s FreeAgent Theater is in isolation a reasonable device. It is easy to set up and use and delivers a good quality viewing experience for a reasonable price. However, take into account the Western Digital WD TV and things look less rosy. The latter has better video, audio, and image format support, an HDMI-out, and a better interface. So, quite simply, the only reason we’d suggest the Theater over the WD TV is if your TV doesn’t have HDMI.