To say that we were disappointed with Seagate’s first attempt at a media player, the FreeAgent Theater, is a bit of an understatement. At the time, it failed to match Western Digital’s excellent WDTV HD by being clunky, lacking digital video connectivity and offering far inferior format support to boot.

Seagate responded with the FreeAgent Theater+, which remedied these lacks with comprehensive format playback and HDMI 1.3 as well as Ethernet. However, it remained a large, chunky device designed to accommodate the company’s range of FreeAgent Go 3.5in hard drives. Now Seagate is bringing out the FreeAgent GoFlex TV HD Media Player, which is a closer competitor to WD’s WDTV Live HD. 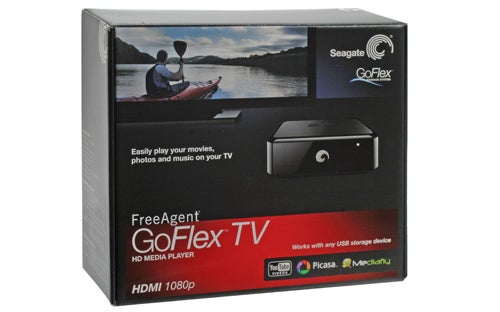 Seagate is covering all its bases with the GoFlex TV. It will play almost every high-definition video format under the sun, offers local and external storage options, and throws in online and networked capabilities for good measure.

It’s quite a large device, around the same size as the Asus O!Play Air HDP-R3, but there’s a good reason for the extra bulk as it can accomodate a 2.5in internal drive, a feature we’ll explore in more detail later on. Dimensions are just under 11 x 15 x 4cm (WxDxH), and it weighs a mere 306g without its power adapter. 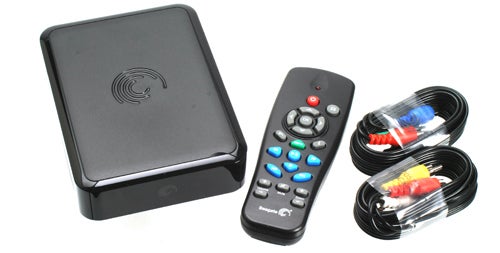 While it’s slightly bulky and its all-plastic finish can’t match the look or feel of the A.C.Ryan Playon!HD Mini, it’s still a decent-looking device. We like its matt top but wish the sides had received a similar finish, as they really do show off fingerprints.

Build quality is solid, though there’s a hint of creak when pressing the top panel. There’s a bit of ‘wasted’ space inside, but this is necessitated by this player being passively cooled. As is, it already gets very warm to the touch after running for a while.

Connectivity is not too inspiring but does at least include all the basics. Composite and component video as well as stereo audio are provided using the included adapter cables, and you also get a composite to SCART adapter. On the digital side there’s an optical output for surround sound and HDMI 1.3 for both video and audio. 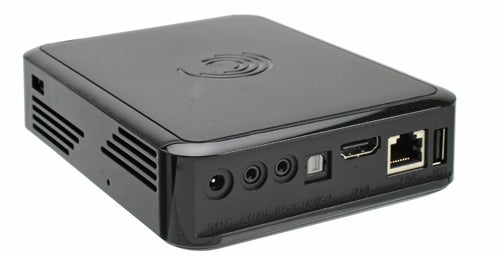 Two USB 2.0 ports and the internal SATA connectors take care of data. The USB ports are nicely spaced, with one at the back and another on the side. An Ethernet port allows you to hook the unit up to the network, and (as with most players on the market) Wi-Fi is provided by an optional Wireless N dongle that’s smaller than the norm. If you want it built-in, the Asus O!Play Air HDP-R3 is still one of the few candidates.

Our only real complaint with the Seagate’s connectivity is that it doesn’t include an HDMI cable in its bundle. Admittedly these are plentiful and cheap these days, but it’s something every other player we’ve reviewed recently does come with, even the cheap and cheerful ViewSonic VMP30.

It’s not only the player that’s had an overhaul,as the FreeAgent GoFlex TV’s remote is also completely altered. It’s less stylish than the slim, grey-and-black affair found with the original FreeAgent Theater, but more usable. It also lies better in the hand due to its bulkier, rounder shape, while its buttons are bigger, distinctly shaped, well-spaced and offer excellent feedback. They’re also logically colour-coded, though obviously that won’t help much in a dark room. Its matt finish is durable and it uses twin AAA batteries. 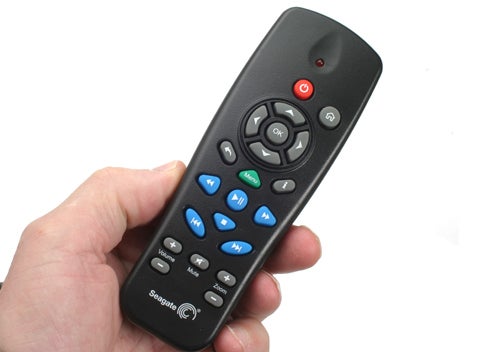 Getting back to the device, as mentioned it can take a 2.5in hard drive. Many players – such as the A.C.Ryan Playon!HD and Iomega ScreenPlay Director HD – allow you to install big, bulky 3.5in drives, but very few let you install the quieter and less power hungry ‘laptop’ drives. With SSDs steadily coming down in price, you could even use one of these as local storage to maintain a silent media player. Access is also very simple, as a push-in drive bay is hidden behind a solid, hinged flap at the player’s front. 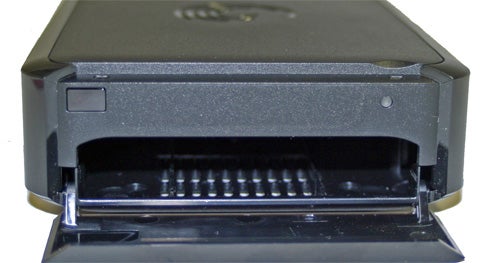 However, there are a number of caveats. Primarily, Seagate has designed the GoFlex TV specifically to be used with its own GoFlex Ultra-Portable drives, and they’re the only ones that will fit perfectly in the provided slot. Thankfully, the connectors aren’t proprietary like with the Emtec Movie Cube P800, so you can actually install any bare 2.5in drive, although if you don’t want the drive ‘floating’ (supported only by its connectors) you’ll need to use a third-party adapter or add DIY support (like some Blu-Tack or a felt pad). 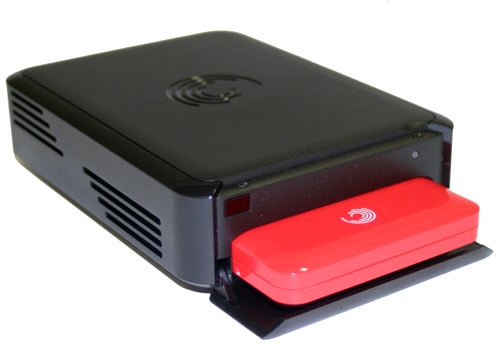 Also, whether you use a Seagate drive or another brand, the drive will stick out by quite a bit, and the effect isn’t pretty.

Things take a more positive turn with format support, which is one of the FreeAgent GoFlex TV’s greatest strengths. It’s compatible with:

It’s also very versatile in the file systems it supports, which include FAT/32, NTFS and even HFS+. So you can format your storage in any way you wish, safe in the knowledge that the GoFlex TV will be able to read it. Like all the better players out there, it indexes files too, so you can browse by location or media type. We only encountered one issue, with a high-bitrate 1080p MKV video which the player couldn’t quite handle displaying an alarming amount of artefacts. 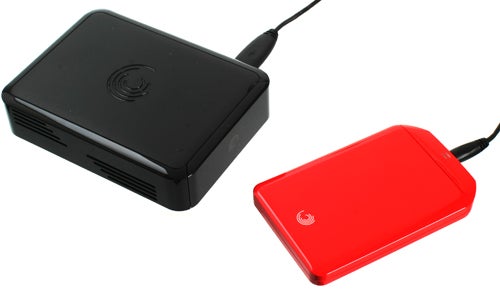 Its video flexibility gives Seagate’s player an immediate edge over Western Digital’s WDTV Live HD and even the rival company’s newer and far more expensive WDTV Live Hub, neither of which support RMVB or FLV. It’s nearly on par with the excellent little A.C.Ryan Playon!HD Mini, though the Dutch media player still wins out in audio and subtitle support.

It’s nice to see that Seagate has provided a decent interface to go with the GoFlex TV’s extensive format support. As long as you remember to set output to HD, it provides a clear, visually attractive set of menus and icons. There are a few rough edges, such as the low-resolution loading animation, but these are small distractions. It certainly can’t begin to compare to the visually stunning WDTV Live Hub, but then few media players can. 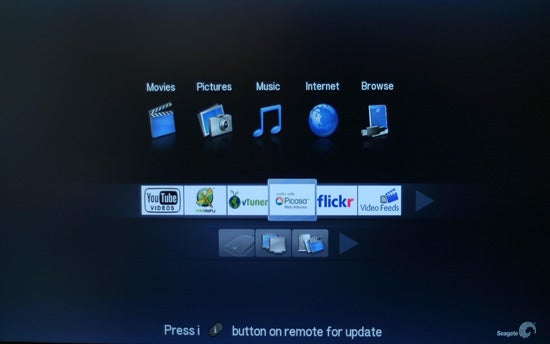 Seagate’s approach to setup, interaction and navigation is unique, and thankfully provides a smooth, intuitive experience. The home screen, which is always accessible at the press of a button on the remote, is divided into three menu strips. The top one gives you access to your locally or network-accessible media, either by type (Movies, Pictures, Music) or location (Browse). Internet calls up the GoFlex TV’s online services, which can also be accessed individually from the middle menu strip. Last of all, the third strip only activates with a 2.5in drive plugged in, and accesses the drive, network or connected media servers. 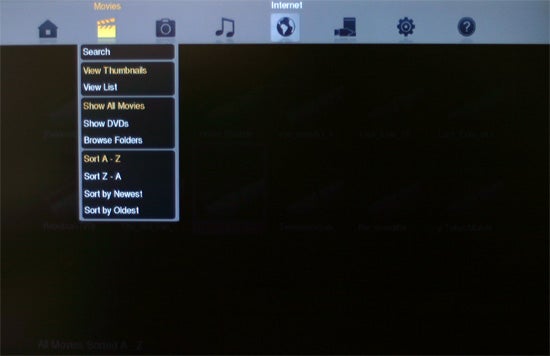 An options menu is available at any time, which brings up a strip at the top of your screen. It’s dynamic so functionality will change depending on where you are in the main menus or what media you’re playing back. This is also where you can alter the media player’s settings, and it’s a nice touch that these aren’t accessible in the main menu, preventing less tech-savvy relatives or friends from inadvertently messing with your configurations.

While Seagate’s player doesn’t offer internet browsing like the ViewSonic VMP74, it does offer a few unique online services. To begin with there’s Netflix functionality, though for now that’s still restricted to the US so it won’t be available to UK readers, and it would have been nice if Seagate had managed to get BBC’s iPlayer as an alternative.

You do get YouTube, though not in HD. MediaFly is a free, multiplatform service which allows you to manage audio and video content (perhaps mainly useful for podcast selection). vTuner is a similarly popular internet radio service offering over 100 channels to choose from. For uploading and sharing photos on the net you get a choice between Picasa or Flickr, you can receive text and video RSS feeds, and finally we have passable Weather and Finance widgets.

So how does Seagate’s smallest media player hold up overall? It’s reasonably well-made, quiet, and offers decent connectivity. Its interface is muted and simplistic but not unattractive, file support is extensive and (one hiccup on a high-bitrate video aside) playback smooth. Its price of just under £80 is also very reasonable (though you might need to factor in a few quid for an HDMI cable), especially when you consider it’s one of the very few media players that can take a 2.5in drive for local storage. 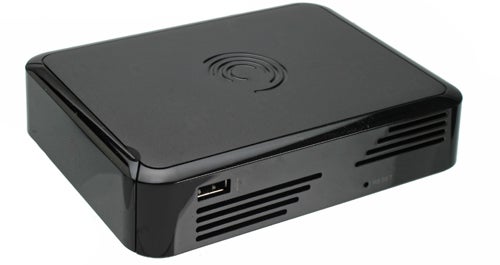 Because the £83 WDTV Live HD doesn’t support RMVB or FLV video, Seagate’s strongest competitors are the A.C.Ryan Playon!HD Mini and Asus O!Play HD2, both available at around £85. Out of these, the Asus offers the most features but is also the largest due to its 3.5in drive bay, while the A.C.Ryan doesn’t have an internal drive option, so which one you go for will depend on your needs.

While not without a few niggles and rough edges, Seagate’s FreeAgent GoFlex TV is a versatile and affordable media player that will play back nearly every video you might throw at it.