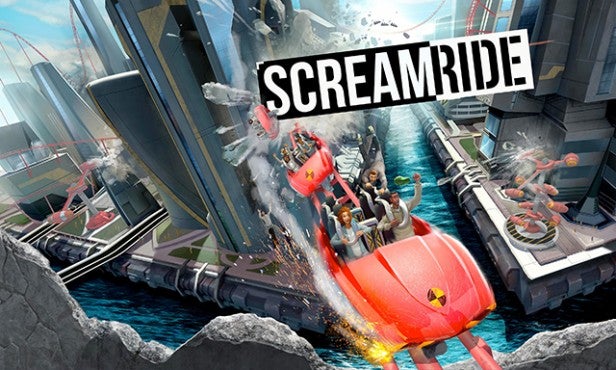 Available on Xbox 360, Xbox One (reviewed)
As someone who loves rollercoasters, thrill rides, futuristic racers and simulated mass destruction, I’m pretty close to ScreamRide’s ideal audience, yet I find it a hard game to love. There are good ideas here and they’re often well executed, but as an experience it’s never quite as thrilling as the rides and games that have inspired it.

The premise is part Rollercoaster Tycoon, part Wipeout, part Portal, where a near-future corporation experiments with cutting-edge coasters and thrill rides using adrenaline junkie volunteers. Riding kamikaze rollercoasters or smashing up the scenery in futuristic demolition capsules, these testers seem ready for any kind of danger, and it’s up to you as a pilot, engineer or demolitions expert to give them exactly what they want. 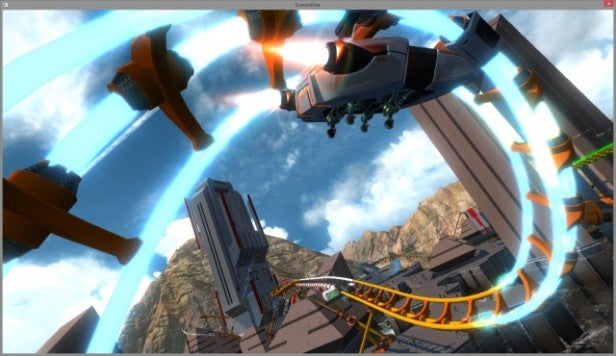 In practice, this means taking part in three different series of activities, spread across six different locations. In the ScreamRider portion you take the controls of a rollercoaster cart as it speeds along the track, leaning into corners, gathering boost from the blue marked sections and using it to speed past obstacles at a mighty pace.  In the Engineer portion, you build or fix incomplete coasters according to certain parameters, making sure they don’t throw (too many) riders out of the car, and that they’re thrilling as possible. In the Demolition Expert portion, you launch a variety of rollercoaster carts and capsules (called ‘cabins’) at groups of buildings, doing your best to bring them down in style.

All three elements have their merits. ScreamRider starts easy with leaning into corners, tapping X at the optimal moment to gather boost then using that boost to maintain speeds, but it’s not long before it introduces jumps, blocks on the track, collapsing track sections and sections with only one rail. Though it’s presented in first-person 3D, there’s a hint of the Trials games in the way you learn to approach it, as you maximise your boost, lean, accelerate or break your way out of danger, and boost your way through demanding sections. At its best, it’s almost as exciting as it sounds. 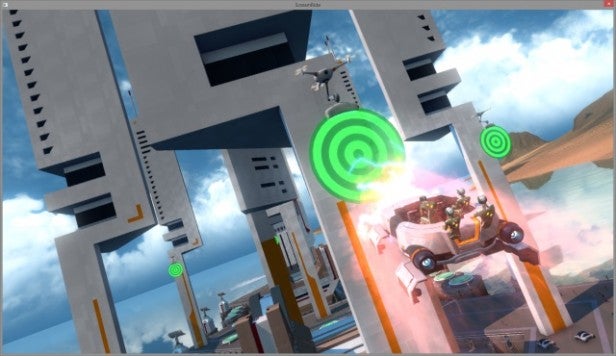 Demolition Expert, meanwhile, has a mass of Angry Birds appeal. Again, the game introduces new cabins or carts with each location, giving you something new to get your teeth into, and it steadily develops into a kind of strategic puzzle game, where you work out which cabins or carts could best be employed against which structures, then do your best to execute your plans. Even the most basic cabins come with aftertouch, but once Demolition Expert throws in gliding coaster carts, exploding cabins, bouncing cabins and cabins that skim, Dambusters-style, across open water, you’ll have some pretty tricky challenges on your hands.

Engineer mode is the slowest of the bunch, but that doesn’t mean it isn’t engaging. The development team at Frontier has form in the coaster construction genre, having masterminded Rollercoaster Tycoon 3 and the Thrillville series, and that’s reflected in what are probably the best fully 3D track construction tools we’ve ever seen. They’re smart, flexible and intuitive, with a fantastic auto-complete option that takes some of the work out of connecting the bits together, and it couldn’t really be much easier to add graceful banked curves, loops, inline twists, hammerheads and cobra rolls to your track. You can test your track at any time, and helpful indicators then appear to show you where your track is too intense, where it’s stalling, and where you’re flinging the poor riders out of the car and into the scenery. 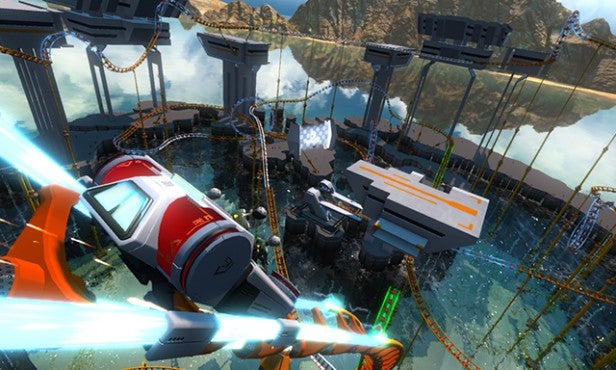 Unfortunately, no one element feels quite as fun or polished as it could be. ScreamRider mode has a handful of tracks that were probably more fun to build than they are to actually play, with pernickety sequences of bends and obstacles that interrupt the flow of the course. Come off the track, and you’re treated to a shot of your riders and carts flying into the scenery and smashing towering structures into little blocks, but this seems more pointless and annoying the more you play. Before long, you’ll be skipping them every time.

Demolition Expert fares a little better, but the environments just aren’t that rewarding to destroy. The best destruction games – Burnout’s Crash mode or Saints Row’s Insurance Fraud mode, for example – work because there’s a level of slightly sick, slapstick humour involved. Demolition Expert doesn’t have anything you can take any childish glee in bringing down, just a bunch of anonymous structures. 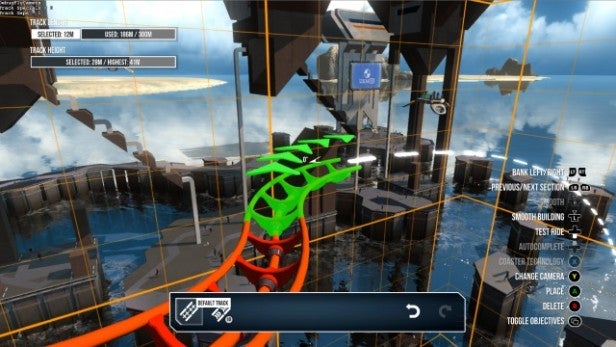 Even Engineering can be oddly frustrating, as you spend more time working around the restrictions of the setting or the track length instead of building the biggest, most badass rollercoaster you can. You soon learn to curse the invisible barriers that crop up when you try to route your coaster track past a building and reconnect it with a section around the corner. Sure, it’s part of the challenge, but it’s not a particularly fun part.

Most of all, ScreamRide suffers from a lack of fun in the presentation. It tries its best with its GLaDOS-style AI instructors and the way its riders goof-off or get tossed around, but it rarely raises a smirk in the way that a catastrophe or a vomiting outbreak in Rollercoaster Tycoon might have done. Nor does it help that, while the destructible scenery usually seems well simulated, with real-world physics all in place, the blocks that structures and tracks collapse into aren’t that convincing. The damage model also seems strangely inconsistent. Sometimes buildings tumble at the slightest impact. At other times, they stay standing even though substantial wreckage has occurred. 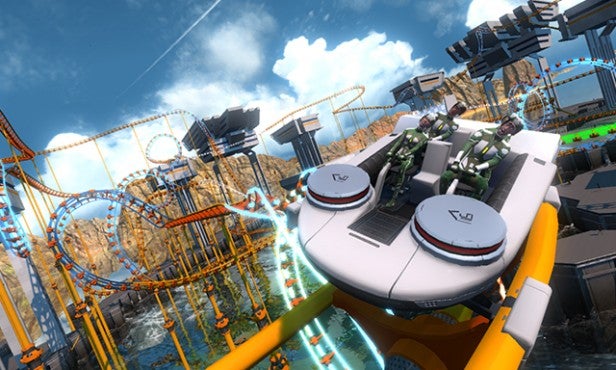 And, at times, ScreamRide seems hell-bent on annoying you. If the repeated riders messing around animations don’t start to grate, the awful pounding dance soundtrack definitely will.

All of this leaves a decent enough game, but one where the fun dial seems stuck on seven when it ought to be turned up to ten. It’s biggest, brightest hope is that a community sees past its flaws and embraces its Sandbox mode, where you can build your own destruction levels or crazy coasters and share them online. There’s potential for greatness here, thanks to a wealth of options, some excellent tools and signs of a deep knowledge of real-world rollercoaster elements, but also potential for confusion. It’s too awkward, for example, to set up a launcher, cabins and buildings to destroy, to the extent that we gave up on building demolition levels and focused on making new coasters.

Verdict
There’s a lot to like about ScreamRide, but not much of it is good enough to love. With three discrete elements, each of which could have been a download game in its own right, it’s reasonably good value, but no one element is quite as brilliant as it could have been, and the environments aren’t engaging enough to make the mindless destruction that much fun. There’s potential in the creative tools and community features, but this isn’t the most thrilling of thrill rides.