After the horrors of EA’s The Godfather, Scarface: The World if Yours is cause for a sigh of relief. Provided they can accept the game’s opening premise – that Al Pacino’s coke-addled gangster, Tony Montana, escaped the bloodbath that ends the film – fans of the movie will be relatively pleased with the way Radical Entertainment has handled the license. Like its inspiration, this is a sharply written, stylish, testosterone-fuelled piece of work, filled with memorable, fantastically foul mouthed dialogue and coming just as close to glorifying a life of crime. And if it is derivative of GTA – and it is – then there’s at least a sense that it’s simply returning the complement; where would Vice City have been without the De Palma film, after all. 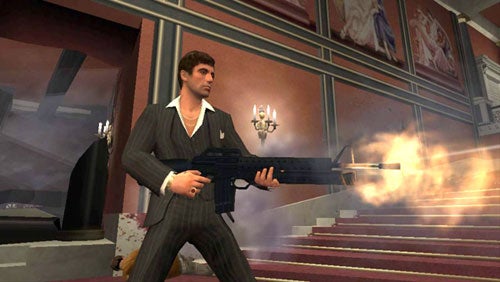 What’s more, there has always been the possibility that Scarface could be more than just another GTA clone. Vivendi Universal did the right thing securing Pacino’s likeness; Tony Montana makes a far more interesting lead character than The Godfather’s slot-in-the-story nameless hood, and as a man of action, not words, it’s not too ridiculous a conceit to put him right at the heart of the game. There’s plenty of Hollywood talent involved here too, with David McKenna, (the writer of Blow and American History X) writing the script, and big names from James Woods to Robert Loggia, Elliot Gould, Cheech Marin, Michael York and (erm) Ricky Gervais delivering the lines. And Radical Entertainment even has form in the open world game – Hulk: Ultimate Destruction was a superb and very different take on the genre, and showed that Radical could create a world you wanted to explore and play with. 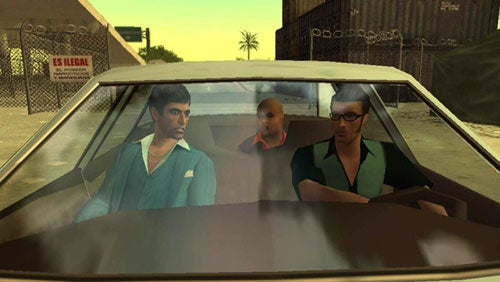 But in retrospect, Vivendi Universal’s decision to restrict Scarface to the current generation of consoles is a smart one. Put it next to GTA and GTA Vice City and for the most part it holds up reasonably well, but you can’t help feeling that it doesn’t just feel dated, but a little bit tired to boot.


Note that I didn’t say ‘looks’ dated, because the problem isn’t one of visuals or technology: Scarface actually looks pretty good. The style – clean lines, over bright sunshine – is reminiscent of Vice City, but it’s more a sensible evolution than a straight revamp. The character models, particularly Tony Montana, are superb, and their animation is full of character; it must have taken ages to get Pacino’s cocky, little-guy swagger from the film right. 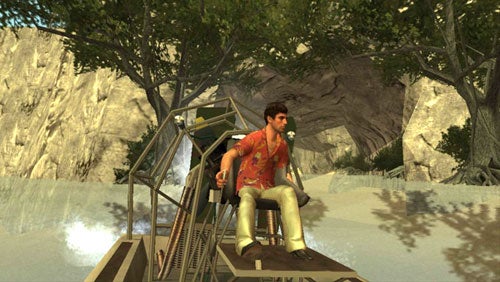 Nor are the game mechanics broken. From the opening sequence, it’s clear that this is a more combat-oriented take on the GTA genre, and Radical has forged a third-person shooting system to make that work. You can use the right stick to aim manually, pull in and out of cover or engage an auto-aim, and it all works much more fluidly than the Godfather’s similar system. Best of all, Scarface implements a sort of rage meter – aptly named ‘Balls’ – which, when filled, allows you to go on the rampage, switching to first-person, auto-targeting each enemy in turn and boosting your health as each and every last cock-a-roach bites the dust. Need to give your balls a boost? Easy, targeting specific body parts does the job, as does taunting your foes from a fine repertoire of choice four-letter epithets. It all comes together exceptionally well. In GTA combat made you groan like an unpleasant chore you hoped you could push through quickly, but here, it’s at the heart of all that’s best about the game.

Nope, to get to the source of Scarface’s problem, we need to go in-depth and look at how the game works on an hour by hour basis. In brief, our Tony has returned from licking his wounds and he wants his empire back. Starting from scratch, you need to win back your mansion, build up your drugs business, eliminate your enemies and put yourself back in the number one crime lord slot. After a build-up period in which the game steadily introduces you to your capabilities and contacts, you’re off to conquer the city territory by territory.

In practice, this means several things. First, the game has a series of central missions that propel you through the storyline. Secondly, there are fronts: businesses you can buy that slowly give you hold of a territory and provide outlets for your evil empire. You’ll also need to build a reputation by completing missions and buying exotics (luxury vehicles, weapons, henchmen, upgrades for your mansion). Finally, you also need to destroy the competition by eliminating enemy gangs on your turf, and taking over their storehouses.


To make these things happen you’ll need to complete certain missions and earn a healthy quantity of dough. The former isn’t usually a problem. Radical knows that part of the fun of being the bad guy is doing away with people in the most unpleasant and spectacular ways possible and a large number of the missions are based on exactly such activities. Thanks to the elegance of the combat system and the use of Balls, the fire fights are a lot more entertaining than the tiresome shoot-outs in The Godfather, and the game knows when to throw in vehicles or interesting locations to keep things interesting. Add in shotguns, grenade launchers and our good old friend, the chainsaw, and there should be enough mayhem to keep the most bloodthirsty fan feeling cheerful.

However, when the game moves away from this style, it all seems to go horribly wrong. I don’t know about you, but if I’m Tony Montana I want to swagger around threatening people in an imponderably thick Cuban accent, dishing out the damage, and spattering four-letter words like they’re going out of fashion. What I don’t want to do is run gopher missions, yet the game keeps throwing in missions that have you fly-tipping stolen goods or dropping off items at certain points. More seriously, the business of making money is dull. First, your old pal Felix fixes you up with a contact, who gives you a mission; one of several generic efforts that you’ll find yourself repeating as the game goes on, usually involving the elimination of a target, escorting a family member or delivering merchandise by road or water. Having completed the mission, you’re given the location of the supplier and you drive to them to make a deal (done via a golf-game style swing-o-meter). Now laden with Columbia’s second-best known export, you then drive around the neighbourhood selling the stuff to local dealers (using the swing-o-meter to get the best deal). Make sales, make money, and then off to the bank to launder it.

The first run through this process it’s roughly entertaining, but it soon gets wearing. The result is a game that – like a bad learner driver – spends a lot of time pottering around in second gear, then suddenly lurches into fourth at the first sign of open road, delivering some really great moments, before crunching back into second with a nasty jolt. You’re regularly weighed down by tedious, repetitive trudges through the least glamorous areas of the illegal drugs business, with you thinking, “I’m the crime lord around here – shouldn’t someone else be doing this stuff?”

It’s not as if you can’t have people working for you. The game actively encourages you to hire henchmen, the most useful of whom is a driver who can be summoned rudely on an appropriately prehistoric-looking satellite phone and told to deliver your car (plus a boot full of weapons) to your current location. The game also throws in enforcers and hitmen later on, meaning you can switch to them to tackle gang-eliminating tasks. However, while this stuff may be very neat – and it is – you never seem to be having quite as much fun as you should be.

And that’s what separates Scarface from the best open-world games. At its best, the genre is all about filling the world with toys, then letting you go out and play with them, and even Radical’s own Hulk: Ultimate Destruction did more to make sure you had fun. Scarface is bold, dashing and violent, but it simply isn’t that playful. Don’t get me wrong: there’s something to be said for its attitude: it has the character of the film down pat, and I love the way it resists the temptation to go for the kind of cheap jokes or stupid quips that might tarnish that. I also love the way it plays true to the eighties setting (though we could have done without the odd anachronistic hip-hop or nu-metal track on the otherwise brilliant soundtrack). Yet even Saints Row – a game which could have sorely done with Scarface’s distinctive personality – was more entertaining outside of the primary campaign. And, in the end, isn’t that what open world games are all about?


Scarface deserves kudos for the classy, authentic way it handles its material, but some tiresome missions mean it’s not quite the game it could have been.