nVidia recently launched an initiative that aims to provide us, the computer buying public, with faster, cheaper PCs. The name of this scheme is Balanced Computing, and as the name suggests, the idea behind it is to educate PC vendors and consumers alike on the values of constructing and buying PCs that consist of a balanced set of components, rather than the traditional view that the fastest CPU is best.


It’s a system that’s been built with this initiative in mind that I’m reviewing today but before I get onto the review I’ll explain a little more about the Balanced PC concept.

Of course, with nVidia being a company that designs and manufactures graphics card and chipsets, it should come as no surprise that it isn’t encouraging you to go out and buy a bigger hard drive or invest in more memory. Instead it would like to shift the emphasis from buying a PC with the fastest CPU to getting the nippiest graphics card for your money.


Now although this sounds like a whole load of marketing fluff, there are actually a fair number of reasons why this is a sensible suggestion for many people, not just gamers.


It goes without saying that gamers are going to be the main beneficiaries, at least in the near future, as system vendors will now stock lower cost PCs that still feature cutting edge graphics. However, with projects like nVidia’s CUDA, and ATI’s CTM GPGPU implementations gaining more ground and even Intel muscling in on the graphics party, it is clear that the huge parallel processing power of the GPU is soon going to be utilised by more and more software. This should not only speed up games but also many other aspects of everyday computing.


For instance, one of the first mainstream products that has seen GPU acceleration is the lowly PDF-reader, Adobe Reader. As anyone who regularly uses PDFs will know, they can be slow to scroll and generally a bit sluggish on less powerful PCs (or notebooks). But with the release of the GPU accelerated Adobe Reader 8 a lot of the work of reading PDFs has been taken off the CPU’s hands to make reading PDFs easier and quicker than ever.


Other examples are Cooliris’ PicLens and Google’s Picasa image viewer and its Earth global mapping software. These already utilise graphics card acceleration to give these graphics-rich programs that real-time, instant response we all crave from our computers.


Further down the line, the next iteration of Adobe Photoshop is also set to gain GPU acceleration. This will enable previously time consuming tasks like image rotation and filter application to be performed in real-time. We’re not talking little web-size images like we use in our articles, either. You’ll soon be able to spin round a 15-megapixel RAW file like it were a spinning top.


Essentially, in the future, any computing task that involves some sort of image manipulation or visual interaction could benefit from GPU acceleration. So, look out for new versions of your favourite web browsers, video editors, image viewers, and more, as you may find they take on a whole new level of usability that you never thought possible. It’s also worth remembering that most new graphics cards from the last six to twelve months incorporate dedicated video playback acceleration, which takes the burden of decoding and playing back high-definition video away from the CPU, giving you smooth high-quality video.


Although nVidia has formally announced this initiative and you can read up about it on its website, you won’t start seeing PCs branded with some kind of Balanced PC logo any time soon. For now, nVidia is keeping things low-key, concentrating on working in the background with system vendors like Scan to start encouraging them to offer systems that remain great value but also give the best possible, balanced, computing experience.


So, without further ado, let’s take a closer look at the Scan 3XS GTX.

The most obvious place to start with this PC is to get straight to those all important specs. Sitting at the heart of the operation is an Intel E8200 CPU, which is a dual-core built using Intel’s much-fabled 45nm process, and that normally runs at 2.66GHz. In the case of this particular PC, Scan has actually overclocked the CPU to a whopping 3.4GHz (at a cost of £80), which is a speed not to be sniffed at. Being that the overclocking has been done by Scan, this also means it is completely covered by the standard 1-year warranty, which can be extended to three years for a mere £105, ensuring complete peace of mind for a good proportion of the life of the computer.


Propping up that overclocked CPU is some very capable RAM in the form of 2GBs of Corsair CM2X1024. This RAM is only rated to run at 800MHz (the FSB of the E8200 is 1,333MHz) but it offers low latencies, great overclockablilty, and most importantly rock solid stability. The other cornerstone of this system is the motherboard, which is, unsurprisingly, powered by an nVidia chipset, namely the 650i. 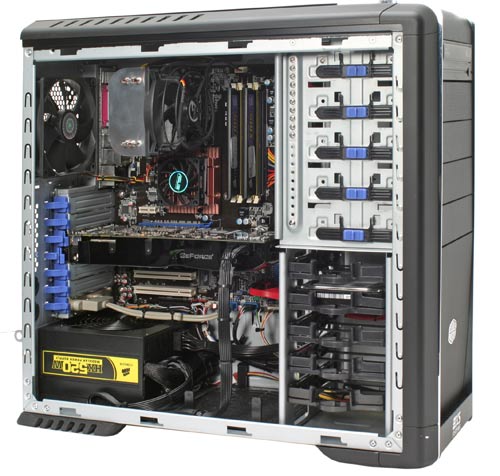 Now, this isn’t one of nVidia’s newest or fastest chipsets but the fact it can overclock a CPU from 2.66GHz to 3.4GHz just goes to show that you don’t always need the biggest and best. Also, the board itself, which is a P5N-D made by Asus, is fully featured with onboard sound, plenty of SATA ports for your hard drives, and with all the peripheral connections you can think of on the back panel, except eSATA that is. The only problem is the appalling cooler that sits atop the chipset. The small fan it uses constantly spins at high speed, which creates a very noticeable high-pitched noise – very annoying!


Of course, the big seller in this whole package is the graphics card and Scan certainly have gone to town by including a 9800 GTX, which as we just showed, is one of the fastest graphics cards on the market. To have one of these circa £200 cards included in a £799 PC is mightily impressive. Of course, the 9800 GTX isn’t ”the” fastest card on the market – that honour goes to the 9800 GX2 – but because the GX2 relies on SLi driver support, which can be rather patchy, it makes sense to go with the much more reliable performer in this everyday PC. 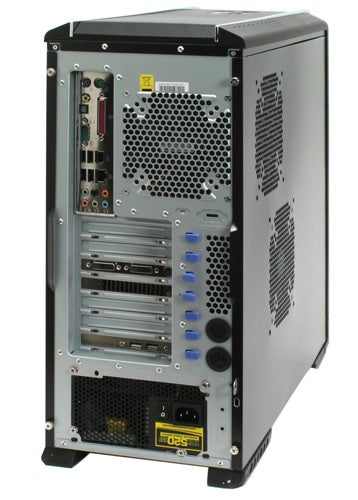 In terms of features, the card includes the aforementioned video decoding hardware for smooth playback of high-definition content. It has two dual-link DVI outputs that both support HDCP, so the PC can be used to playback Blu-ray movies. There’s also support for composite and component video output as well. One feature of this card that Scan hasn’t utilised, though, is the ability to pass audio out through the card’s DVI ports. When used with a DVI-to-HDMI converter, this enables you to use just one HDMI cable to plug your PC into a TV for both sound and video, which is really convenient. However, this requires a cable to be run from the onboard sound to a socket on the top of the graphics card and this hasn’t been done.

The rest of the PC really just ticks the boxes with a perfectly reasonable 250GB Western Digital Caviar SE16 hard drive providing enough storage to get started, a Toshiba DVD-/+RW drive providing CD/DVD reading and writing capabilities, an Arctic Cooling Freezer 7 Pro keeping your CPU cool, and a Cooler Master HX520W to power the whole lot. These are all quality brands that we’d be happy to use in our own PCs and, just as nVidia has specified, the balance of components is absolutely spot on. Unfortunately, there was another fairly major noise issue we encountered with this setup. Scan had disabled the dynamic fan control in the motherboard’s BIOS. This meant the Freezer 7 Pro was running at a very noisy full-whack when I first turned the system on. Of course, I knew what to look for to sort this out but it’s certainly not obvious to the general consumer. 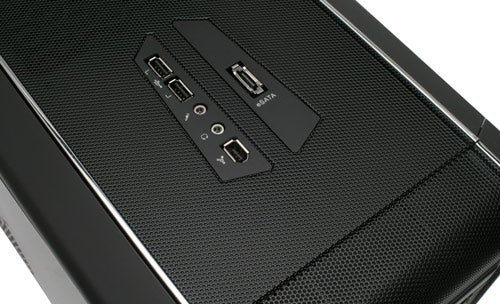 The chassis is also made by Cooler Master. Called the CM 690, it is one of Cooler Master’s more budget oriented cases but it is well laid out with ample space to work in (if you fancy a rummage around inside when the warranty’s run out). It uses nice quiet fans that provide lots of cooling airflow and on the top there’s a panel that includes two USB, a microphone, a headphone, a 9-pin Firewire, and an eSATA socket – pretty much all the connectivity options one could hope for.


However, the styling of the system may not appeal to some end users with its very austere black livery, but there’s always the option of tucking the case away in a corner to keep it out of sight and mind. I did have one small issue with the eSATA port in that it seemed to be rather flimsy and just the weight of an inserted cable is enough to bend it over quite considerably. I can’t imagine it would fail any time soon but it would certainly benefit from a little reinforcement. 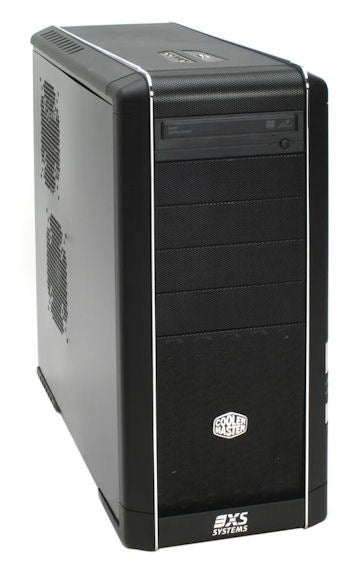 Overall, though, Scan has put together a tidy system that certainly conforms to what I would consider an ideal system for someone that is an occasional, or even regular, gamer. As you can see from our test results on the next page, it powers through absolutely everything with consummate ease and even Crysis will be playable on this system. For those less likely to be ripping through the latest gaming titles, though, the 9800 GTX is way too overpowered and opting for a cheaper option like the 9600 GT or HD 3850, would be more than enough – even with all this new GPU accelerated, non-gaming software that’s coming through. All scan needs to do now is sort out those noise issues.


nVidia’s new Balanced PC initiative has certainly paid dividends with this Scan PC. Its balance of components is just right for the gamer on a budget – especially with that warranty-backed overclocked CPU – and in terms of performance and value, we can’t recommend it highly enough. There are a couple of minor quality issues that knock it down a point but apart from that it we can find no fault.