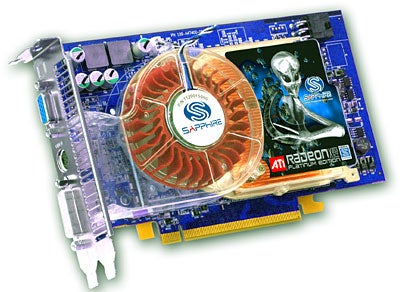 It’s been just over a month since we took a good look at a reference board based on ATI’s latest blockbuster card, the Radeon X850 XT Platinum Edition. To follow that up, we grabbed a fleeting opportunity to take a look at a retail version of the card. Not surprisingly this is Sapphire branded, as it is this company that actually manufactures the reference boards for ATI and indeed for several other board manufacturers too. It’s also not a surprise therefore, that the card looks identical to the reference design. As a dual slot card, an external power connector is required but according to the spec sheet only a 300Watt power supply is required. If you want to try overclocking you’ll need more than that but it’s likely that any PC this monster card was placed into would have a meatier PSU anyway.


Just to recap briefly, the X850 XT PE, codenamed R480, is a 16 pixel-pipeline and six vertex pipeline VPU, backed up by 256MB of GDDR3 memory. Unlike the recent X800 XL, which has been shrunk to 0.11 Micron process, this part is still based on TSMC 0.13 Micron process. However, experience has enabled ATI and TSMC to optimise the process enabling higher clock speeds to be achieved. The core is running at a new high for ATI of 540MHz, while the memory is up to 590MHz or 1.18GHz effective. Making a welcome appearance on an ATI X8** series board is dual DVI, no doubt to match nVidia’s 6800 Ultra cards. VIVO is also present and if you do pick up a full retail version of one of these Sapphire boards, in the box you’ll get a copy of the game Price of Persia: Sands of Time.


One point worth mentioning though is that at this stage the part is PCI Express only. It seems as though ATI doesn’t have the bridge chip ready to move from native PCI Express to AGP, so those with AGP boards looking to simply upgrade their graphics card may find going the nVidia route the only choice as AGP 6800 Ultra’s are readily available. Conversely however, 6800 Ultra for PCI Express seem to be something of a rare beast, with all the online retailers I looked at showing no stock at all or stating long-lead times.


As the cards are so similar you may wonder what the need is to even retest the card. The reason is that reference cards are the equivalent of the previews of taped up test cars you see caught by a long zoom lens in car magazines. They are often close to the final product but not necessarily exactly the same thing and the same applies to graphics cards. There could be variations in the hardware spec and the driver software, and we will see this in action shortly.


Our test platform currently consists of an Intel Pentium 4 Extreme Edition running at 3.46GHz, and two 512MB sticks of Crucial Ballistix RAM running in an Intel 925XE chipset with a 1,066 front side bus. To test we ran our recently introduced set of streamlined 3D benchmarks. These consist of six tests, with game tests for OpenGL from the recent blockbuster Doom 3, while the demanding Far Cry and the ubiquitous Half-Life 2 represent DirectX titles. We also run a slight older but still popular title in the form of Unreal Tournament 2004, while synthetic tests are conducted by the industry standard 3DMark03 and 3DMark05. 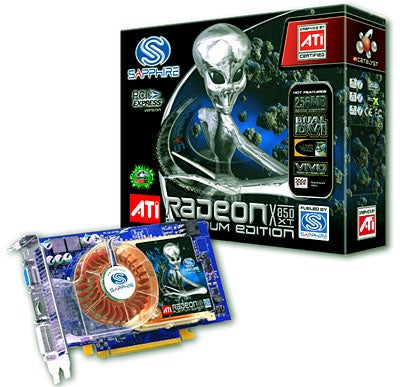 Once we got going with the testing we soon noticed that while we were getting some seriously high numbers they were nevertheless falling short of what we achieved with the X850 XT PE reference car last month. For example, in 3DMark03 the reference board broke 13,000 but the Sapphire only reached 12,882. The pattern was repeated in 3DMark05. Proof that nothing was awry with the hardware itself came with the scores in Unreal Tournament 2004 with the Sapphire exactly matching those of the reference board. In the rest of the game results however, the Sapphire once again consistently fell behind the reference card by consistently similar margins. The big surprise though was in Half-Life 2 at high resolutions, where the card was losing around 30fps to the reference board when anisotropic filtering was applied at both 1,280 x 1,024 and 1,600 x 1,200, far below what we would have expected.


There is a possible explanation however, for this unusual behaviour. While the reference board was tested with a special driver supplied by ATI, the Sapphire was tested with the official 4.12 release and this appears to be less aggressive than reference board driver. That said, the results at 1,600 x 1,200 in Half-Life 2 are clearly anomalous and hopefully ATI will sort this out with its next driver release. It’s especially puzzling as the 4.12 drivers had a positive effect of performance when we tested the X800XL.


Despite this the card is still worthy of an award. At the other resolutions in Half-Life 2, the card is still faster than anything we’ve tested, save for the water cooled Gainward PowerPack CoolFX! GeForce 6800 card. However, that was a highly unusual card requiring a lot of difficult installation, and will still set you back £590. So when you consider that the Sapphire is on sale in the same price bracket as a GeForce 6800 GT, there really is no contest. And while SLI may well spoil ATI’s party, it’s still early days for the much hyped technology. Its also worth mentioning that even with the lower scores, the Sapphire X850 XT PE puts ATI on a more or less even keel with nVidia in Doom 3, which is impressive considering that the iD title really does play to the GeForce 6800’s strengths.


It may be disappointing that the it’s slower than the reference board and that there are some odd results at 1,600 x 1,200 in Half-Life 2 but there is still a lot to celebrate about this card. Hopefully the issues will be sorted out in the next driver release because these aside the Sapphire Radeon X850 XT Platinum Edition is one very attractively priced, powerhouse of a graphics card.