The market for standalone music players seems to be in three segments at the moment. There are multi-GB players on which you can store your entire music collection, small memory players designed for a few favourite tracks of the moment, and, sitting in between there are players of 512MB and 1GB which allow you to carry enough music for a weekend or even a week away.


This middle category is awash with products, and to be a success players need to meet a lot of criteria. They need to be small in size so that they are no trouble to tote, offer good quality sound, be easy to use both within themselves and for data transfer and to come in at an attractive price. Good looks help too of course. It’s a tall order. So how does the Sansa, the new player from data storage specialist SanDisk meet these criteria? 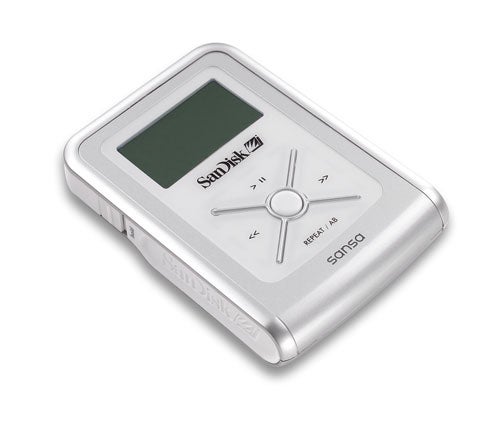 The Sansa comes in two versions. I tried the 1GB version, coloured iPod-ish white and silver. The 512MB version has a slightly different name – it is the Sansa e130 – but shares all the characteristics of this one except for its colour and less generous storage memory.


SanDisk has been pretty shrewd to include an SD card slot in the Sansa. Currently this means you can double the e140’s capacity for about £50. If SD cards continue to be popular and capacities to rise, the ratio of money to memory should go in the user’s favour allowing this player to grow with your needs. Rather a clever wheeze, that.


Getting music onto the e140 was no trouble at all. Connecting the player to my PC with the supplied USB 2.0 cable caused it to show up as a drive, to which music was easily copied. For similarly quick-fire song transfer it was easy to pop an SD card into my laptop and copy files. The player supports MP3 and WMA file types as well as Audible files for the spoken word. There’s also an FM radio with 20 presets and a stopwatch.

Yes, that’s a stopwatch. I have a much more sophisticated stopwatch on my wrist 24 hours a day, and it seems very out of place on the Sansa. If SanDisk had thought laterally, putting on a few features like count up and count down alarms, and music-off after a set time, they could have been on to something. As it is, this is a feature with no real use as far as I can tell.


The Sansa is not the smallest 1GB player around, though at 2.9 x 2.17 x 0.55in it is pocket friendly. It looks good from afar, but get up closer and you see its plasticy construction more plainly. I don’t mind this if the sound quality is good, but those who like high design standards might want to look elsewhere. The transparent carrying case and jogger’s armband that are supplied with the Sansa could also be useful for the active user. 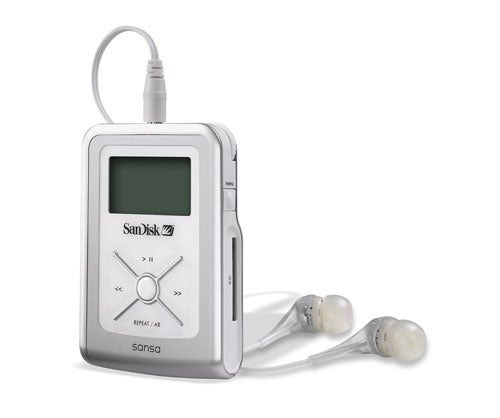 Sound quality is passable to good. The supplied in-ear headset (white of course) delivers average sound quality, on which my own Sennheiser headphones improved. There is an equaliser with some presets (jazz, pop, classical, rock) and a feature called SRS WOW which variously allows you to accentuate bass, 3D sound levels, and so on. None of these options provided what I’d call superb quality sound with rich tones, though for use while travelling it’s fine.


Operating the device involves using large buttons on the front of the casing, as well as a wheel and button on the right side. The wheel feels more than a little tacky, and there are some unintuitive button combinations to get used to, but for just flicking between tracks the large front buttons are great. There’s a hold button which does a good job of avoiding inadvertent button presses when the device is in a pocket.

You’ll have got the message that this is a fairly average player by now. There are some points that are considerable niggles though. Having an SD card slot is great for expanding memory, but it is annoying that you can’t copy data between card and internal memory. Also you can’t delete from the player itself. You need to be connected to a computer to remove files. Although on the plus side, this means you can’t accidentally delete tracks.


What is really annoying is that you can’t search for tracks or set up playlists. You’re stuck with sorting by artist, album, songs, genre or year, to choosing ‘new music’ that’s stuff put onto the Sansa within the last day, week or month, and spoken word files. 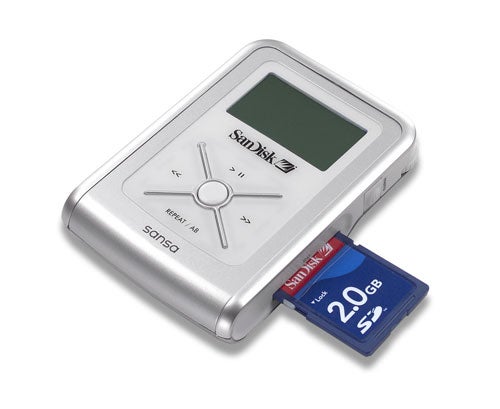 The Sansa’s single AAA cell kept it going for a weekend away, and even if you need to carry spares batteries AAAs are not exactly space hungry. Note, though, that as they lose power, there will come a point where an AAA won’t provide enough juice to read from an SD card.


The Sansa does a reasonably good job, but if I were spending around £120 on a player in this category I’d probably be very tempted to save a little harder and buy the Sony NW-E507 which is only a little more expensive but offers more in terms of style and quality of output.


A brave attempt at an expandable digital music player. Unfortunately the bland design, and average sound quality take off much of the shine. If you can live without memory card expansion, I’d recommend the excellent Sony NW-E507 over the Sansa.