There was a time when Sandisk’s range of Sansa MP3 players wasn’t just a compelling alternative to Apple’s iPod nano, but was arguably the better choice. It’s been a long time since 2006 and the days of the e260, and competition is stiffer than ever. After the somewhat lacklustre Fuze, we were hoping the Sansa Fuze+ would offer itself as a significant improvement, and more importantly a compelling rival to the new, oh-so-expensive but oh-so-desirable iPod nano. 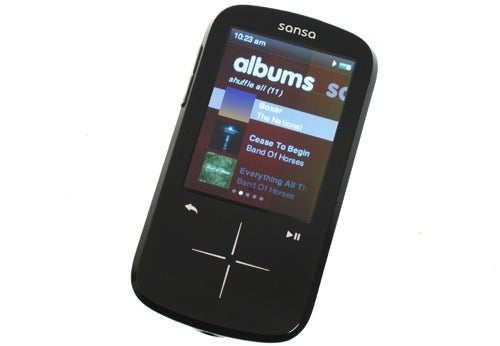 Sadly, we’re not convinced the Fuze+ deserves its suffix; it might be better called the Fuze minus. What’s most disappointing is that on paper the reasons that this player is touted as an upgrade to the Fuze are self-evident – they just don’t work in practice as well as one might think they should.


At 51mm x 87mm x 10mm the Fuze+ isn’t much different in size to its predecessor, and it fits nicely in the palm of a hand. The screen is larger, at 61mm, but the resolution of 240 x 320 pixels isn’t anything to get excited about – even if it will play 30fps video. 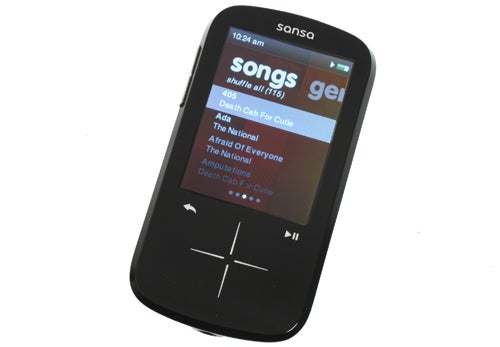 We should applaud Sandisk for outfitting the Sansa Fuze+ with a micro-usb port. And the provision of a micro-SD card slot makes expanding on the internal storage capacity easy. At £64.99 for 4GB, £73.99 for 8GB and £89.99 for £16GB it’s not like Sandisk’s pricing is extortionate in the first place. It’s barely cheaper to buy your own memory separately than to have it built in. In fact, that the 16GB version only comes in black whereas the 8GB and 4GB offer a range of colour options might have more bearing on which you’d choose.


The microSD bay also lets you use Sandisk’s slotRadio cards. While the appeal of these is fairly limited, it’s definitely a neat concept. The provision of a radio will please those who still listen to such archaic forms of audio delivery. Which includes us at 6pm on a Friday night, thanks to Radio 4. 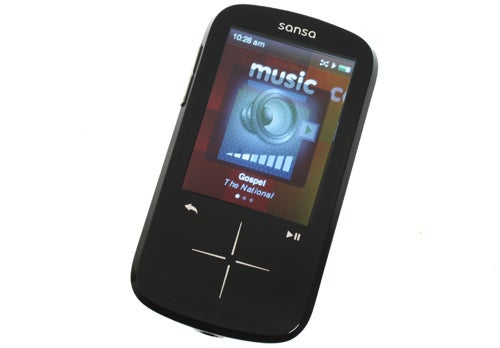 The more obvious change on the Fuze+ verses the Fuze is the removal of the control wheel carried by ever Sansa player since the e200-series, in favour of a capacitive control surface. Capacitive controls being all the rage currently we can see why Sandisk made this decision, but we’re convinced it was the wrong one. Touchscreen-interfaces excepted, the Sansa click-wheel was the best interface we’ve ever used on a media player away from that of an iPod so we’re sad to see it go, especially when its replacement is, frankly, rubbish.

The back and play/pause ‘buttons’ work well enough, as the areas of the capacitive control section given to their functions seem large enough not to interfere with anything else. The D-pad area, however, proved the cause of much frustration. Menus can be navigated either by tapping in the direction you wish to move or by scrolling. The tapping action works well enough, but occasionally we ended up hitting the centre “okay” control instead of a directional one. We could chalk that up to clumsy thumb gestures, were the swiping action not woefully inaccurate, making it pretty much impossible to navigate a long list easily. 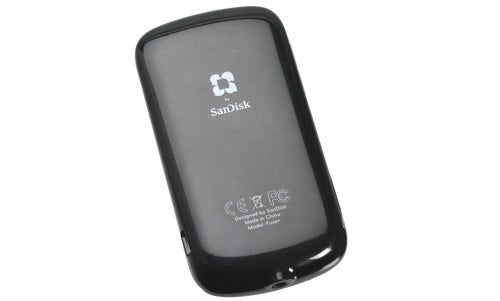 To its credit, the Sansa Fuze+ somewhat makes up for the failings of its interface with the functionality beneath it. Video playback, for instance, is as good as you can hope for from such a small display, and format support – WMV, H.264 MPEG-4 and Flip Video – is reasonably comprehensive. We remain unconvinced by the appeal of watching more than the occasional short clip on such a small display, but at least the ability is there if you want it; unlike on the iPod nano.

The Sansa Fuze+ will also handle just about every audio format you could ask of it; namely Audible, MP3, WMA, Secure WMA, AAC Ogg Vorbis and FLAC. However, whereas previously we lauded Sandisk’s players for sounding significantly better than their iPod rivals, we’re not so convinced this is the case any more. The Fuze+ doesn’t sound better than the iPod nano so much as different. Which sounds ‘better’ will be more a matter of personal taste, coupled with what headphones are being used, than any objective measure.


While FLAC support could theoretically offer excellent quality, in reality we couldn’t really claim to have noticed the difference between lossless and high bit-rate lossy files on the Fuze+ – and of course the iPod nano will play (Apple) Lossless files if you want to, so the Fuze+ doesn’t offer anything special there anyway. 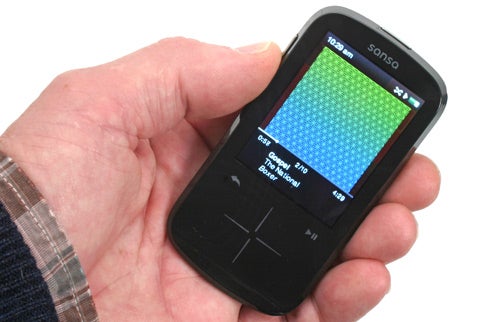 Besides which; while a number of you are likely to cry foul at the suggestion, we’re not so sure that sound quality is the most important aspect of this class of media player, anyway. The Fuze+ sounds ‘good enough’ for its asking price, but so do a number of other players with better interfaces, the Sony Walkman E-Series being a prime example.


If you can live with the ropey interface, the Sansa Fuze+ proves a capable, reasonably priced media player. However, there are plenty of other players out there that offer a better user experience for similar, or less, money.