It was some time ago that Sandra sang the praises of the concept of the U3 drive, so when I was recently I offered a chance to look at a 2GB U3 drive from SanDisk, I was happy to accept.


The U3 drive concept is thus: instead of your USB memory key merely being dumb storage a U3 drive contains preinstalled software applications. The idea is that all your major applications run from your USB key rather than from the hard disk of the PC you plug it into. This gives you the advantage of being more easily able to transport your work around with you and increase security by protecting you from viruses that can lurk on PCs.

When you first plug in your drive a U3 icon appears in the system tray. From here you fire up the U3 Launchpad, which looks very much like the Windows XP launcher but pops up from the system tray. From here you can launch the preinstalled applications, which on the SanDisk Titanium are essentially just Skype and Avast antivirus. The former is offered with a special offer of one month of voicemail included. This start-up process can be slightly annoying as it takes a few seconds before this start up tray loads but you can prevent it from running by holding down shift as you plug in the drive. 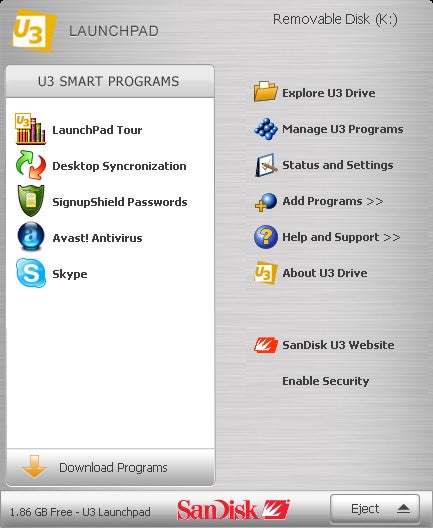 You can’t make any application run from ‘U3 Smart’ applications are ones that have been adapted to run directly from the drive, and remove themselves totally from the system after you remove the drive. This is why you are always prompted to eject the U3 drive from your PC, rather than just pull it out as you would with a regular USB key. If you want to add applications, you can just download them from the U3 homepage or from a Sandisk portal and there are a whole range to choose from, including obvious essentials such as Firefox and Thunderbird.

The drive it’s small and sleek. It’s encased in metal shell, which seems rugged enough – the packaging claims it can withstand 2,000lbs worth of force, but I wasn’t in a position to be able to test that, but it does inspire confidence. I always dislike USB keys with removable lids as they’re too easy to lose. Frankly, I’m amazed that I’ve still got the little plastic top of my current 1GB USB key workhorse that I’ve had for nearly a year.

No such worries with the Cruzer though as the USB plug slides in and out via a plastic switch in the centre. A small ring is located on one corner so you can attach it to a key-ring, although this seems a tad flimsy. Alternatively, a slide on clip is provided so you can have it clipped to a jacket pocket. Another option is the lanyard chain provided. When you plug it in, a light underneath the plastic slider switch illuminates – naturally this is blue, and this flickers when there’s disc activity. 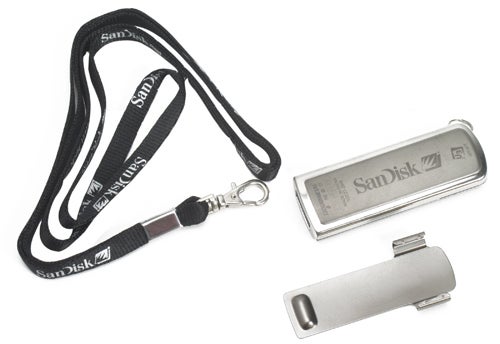 Copying a 351MB single file over from a local hard disk to the drive only took 28.5 seconds, giving a data rate of 12.31MB/s – not far off the quotes “lightening fast” 15MB/s boasted off on the package. With a larger 699MB file this actually dropped to 11.65MB/s, taking exactly one minute. We then tried a very demanding transfer of 767MB of images – lots of relatively small files and here the figure dropped down to 7.03MB/s (1m 49 seconds). Still it’s a lot faster than any of the Microdrive based portable hard disks I’ve tested, though of course those tend to be around 8GB in capacity. The read speeds from the drive of the same mixed files was a lot higher at 11.82MB/s and 13.7MB/s for the 699MB file.


If the 2GB drive isn’t big enough, Sandisk does offer a 4GB version, though at the time of writing it had yet to appear on the supplier’s web site. In the mean time though the prices for the 2GB and 1GB are simply amazing. MyMemory claims it has a 30 per cent off offer and the price of £42.39 including VAT for the 2GB drive is eye wateringly low. The 1GB costs a paltry £17.99. 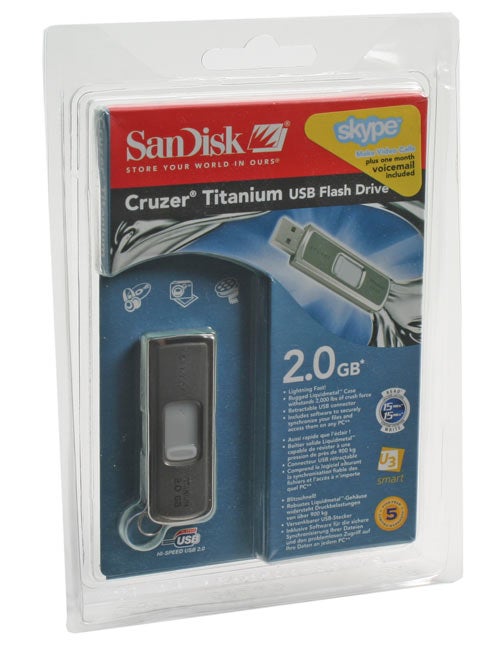 You can get a non U3 enabled from for around £10 less, but with 2GB to play with at such a bargain price you might as well buy a U3 enabled drive even if you don’t think that you’ll need it to start with, as at least it gives you the option in the future.


The U3 enabled Sandisk Cruzer Titanium, is compact, rugged, fast and very affordable. As such, there’s really nothing here to find fault with and as such this comes highly recommended.