Six months or so after releasing its YP-U4 ‘Litmus’, Samsung is back for another crack at the Shuffle-sized Mp3 player market with a new player, rather unimaginatively named the YP-U5. Looking back, I’ve a soft spot for this one’s predecessor. While spoilt by average sound quality and a mediocre battery life, it was a nicely designed and very usable player, putting the vast majority of its competitors to shame on several counts. The U4 was extremely compact, made effective use of a tiny screen and had surprisingly practical controls.


All of which makes it a little odd that Samsung has junked so many elements of the design with its replacement.


Out, for a start, goes the colour graduated finish, in favour of a range of solid colours – red, white, pink or black. The unit is marginally narrower and thinner, but a couple of millimetres longer, and the clever slide-out USB connection of the original has now been swapped for a more conventional USB connector covered by a pop-off cap. Strangely enough, while the U5 is the new and improved version of the U4, it actually feels like a more conservative product. 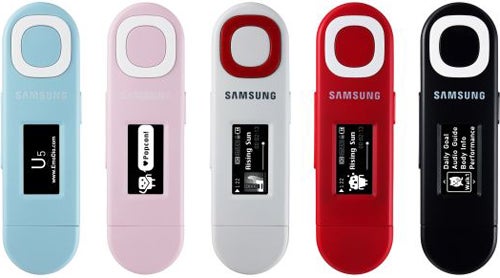 Still, the all-plastic construction feels good and solid, and it’s arguable that the standard USB plug fitted here offers a more robust connection than the slimmed down, coverless plug sported by the old U4. I suspect that might be the reason for the change.


Switch the U5 on and it’s much easier to see the similarities between it and last year’s model. The screen, a 1in, four line, 128 x 64 pixel OLED affair, is identical to the old version’s, and while the touch-sensitive D-pad of the U5 has been replaced by a tilting, white directional ring surrounding a physical pause/play button, the player operates in much the same way.


The ‘back’ button is now mounted on the top of the unit (viewed horizontally) along with a context-sensitive function button, which does various things depending on what mode you have the U5 in. Volume is adjusted using the up and down directions on the white ring. The only other control is a dual function power toggle/lock button on the bottom of the unit, and it’s this that brings me to one of my few complaints about usability. It’s all too easy to accidentally engage the lock while you’re trying to use the top mounted buttons, which is a small but irritating nuisance during everyday use.

As with the U4, Samsung seems hell-bent on giving you some kind of cool audio/visual experience from a tiny screen. With the previous player we had an almost unrecognisable, miniature monochrome simulacrum of the album cover art during playback, plus a range of animations when you flick between functions on the main menu screen or scroll through option screens, each accompanied by a cheerful little noise.


The U5 has all this stuff, but goes one better with a tiny animated character, labelled ‘Popcon’, who turns up to greet you when you first switch on the player, then dances manically on the left of the ‘now playing’ screen to any tracks where you don’t have album art to, erm, enjoy. 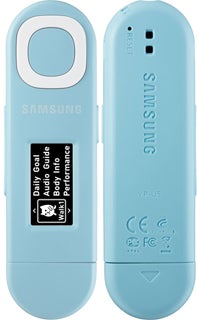 I can’t say that this sort of Tamagotchi nonsense floats my boat, but there’s no question that Samsung has pulled out all the stops to make Popcon a feature, giving you a wide range of cheerful bitmap characters to choose from, and allowing you to name them if you wish. Still, if it’s a bizarre inclusion, it’s not one that has any negative impact on the user experience which is – as with the U4 – very good. Some of us might miss things like on the fly playlist creation, but you can enable gapless playback, and navigation by file browser or the usual ID Tag methods is simplicity itself.


Functionally the U5 has a little more to offer than the average player of this size, though again Samsung seems to be taking a slightly quirky approach. We still get an FM radio with auto presets, a decent little voice recorder and a podcast function, but Samsung has now thrown in a weird Fitness function. Choose an activity from the list (Walking, Running, Hiking, Yoga etc) to do while you’re listening to your player, and the U5 tells you how long you’ve been doing it for and how many calories it thinks you will have burned in the meantime. You can set your body weight and inform the U5 of your daily fitness goals and it will then track your progress day to day, with able help from your ever lovable Popcon.


Again, I can’t see this of being much importance to the average TR reader, but it’s the sort of cute touch that might make the player more appealing to a wider audience. In fact, when you consider that players like this are often sold for use during gym workouts or while jogging, it all makes a certain amount of sense. One thing that doesn’t is that the radio still won’t let you autotune the presets from within the radio function itself. You still have to go outside to the Settings menu and do it from there.

The old U4 was a bit of a disappointment when it came to audio quality. The U5 is an improvement, but – despite Samsung’s trumpeting of its DNSe 3.0 enhancement technology – not a vast one. The variant of DNSe used here is labelled ‘core’, hinting that it doesn’t offer the full power of the version used in the excellent YP-P3 player, and while it still features a processing enhancement designed to restore audio data lost through compression, along with a range of EQ settings, a bass boost function and a 3D effect, the overall result isn’t nearly so impressive.


Bass response is very good, with the U5 dishing out a warm, well defined range of low-end tones and enough power that – with a half-decent pair of headphones – you won’t want to use the bass enhancement function in anger, or you’ll just get a nasty, booming mess.

The U5 is also a fine performer at the other end of the audio spectrum; you might find the highs slightly too bright for comfort, but there’s plenty of detail. What’s more, with the 3D effect kept low or switched off, there’s a nice sense of space, with individual instruments clearly positioned across the stereo range.


The problems come with the mid-range. That all-important mid sounds slightly weak, thin and muffled, and that’s enough to put the U5 behind the Sandisk Sansa Clip and even the iPod shuffle in the sound quality stakes. How serious this is will depend on the headphones you’re using and the music you’re listening to. The output actually seems quite well suited to the cheap and cheerful buds thrown in the box, though needless to say these won’t satisfy anyone who is particular about audio quality.


I tried the U5 with a range of other ‘phones, including the Grado SR60s and iGrados, the Denon AHC551s and a set of Klipsch Custom 2s, and the weak mid-range was apparent across all of them.

Some genres of music aren’t too badly affected. Levees, from Terence Blanchards orchestrated Jazz album, A Tale of God’s Will, sounded fine, the subdued acoustic bass and melancholy, muted trumpet tones having no problems cutting through the funereal strings running through the early and latter sections of the piece. There was also some nice detailing in the piano, percussion and brass that come in midway through.


While the vocals in tracks from Ray LaMontagne’s Gossip in the Grain suffered from the lack of mid-range clarity, the Samsung still delivered a warm, intimate, no-fuss sound. Bass heavy dance tracks like Justice’s Genesis also work well, playing to the YP-U5’s strengths, and I didn’t get bad results from more poppy material from Justin Timberlake, Maroon 5 or Take That.


Rock tracks, however, particularly those with layered heavy guitars and busy drums, have a tendency to sound messy. It’s hard to make out what’s going on for large sections of Mastodon’s Oblivion, and the thick guitar sounds of The Hold Steady’s Sequestered in Memphis have definitely sounded more punchy and urgent. And forget about switching from the Norm or Auto EQ settings to the Rock preset (or, God forbid, Concert Hall) – you’ll only make things worse.


It’s a shame, because in all other respects the U5 is a very nice player, and a worthy rival to the Sansa Clip (still the thinking man’s small format MP3 player of choice). Battery life, at around 20 hours, is very good, and File Format support, with OGG and FLAC now provided, is certainly above average.


Even the pricing is competitive; I can’t imagine anyone paying £30 for the 2GB version when the 4GB version is only £8 more, but you’re still getting a lot of player for that kind of money. If your tastes run more to pop and dance than rock, then the YP-U5 well worth a look. If, however, you want a great all-rounder that can handle any type of music, then Samsung’s latest little wonder falls slightly – just slightly – short of the mark.


A thoughtfully designed micro MP3 player with a lot more bells and whistles than you might expect at the price point. Sound quality isn’t exceptional, but if you can live with the weak mid-range then the YP-U5 offers solid value for money.