Samsung is really starting to get the hang of touch-driven MP3 players. The YP-P2 had its problems, but it was still an impressive first effort. The YP-P3 went a fair way to remedying the YP-P2’s faults and Samsung’s latest, the YP-R1 is better still.


The centrepiece of the YP-R1 is, of course, its 2.6in, 400 x 240 pixel touch-sensitive display. As you might imagine, putting the player’s controls on-screen frees up physical space, such that at 85 x 45.5 x 8.9mm the YP-R1 is barely any bigger than a Sony E Series Walkman, despite having a notably larger display (with a more useful aspect ratio to boot). The brushed metal finish, looks just as good, in an understated way, in black or silver and makes the price tag seem entirely justified; in the hand the YP-R1 really does feel like a quality piece of equipment.


Physical controls are limited to a volume rocker and a dual-purpose hold and power button. The latter, by default, only locks the screen, so the volume can be adjusted even with the player locked, but if you prefer it can lock everything. Were it not for the placement on the far left edge of the hold button, it would be entirely possible to control the YP-R1 singlehanded, but as it is you’ll almost certainly need a second hand to unlock it which is slightly annoying. A proprietary connector is used, which is lamentable, although in fairness to Samsung it does accept a video-out cable should you purchase one, so it’s not there just for the sake of it.

Interaction with the player comes courtesy of Samsung’s TouchWiz interface, which is something of a mixed bag. This is carried over from the YP-P3, although the YP-R1 suffered from none of the unresponsiveness that the YP-P3 had on occasion. Nevertheless, there are still a couple of quirks which could do with ironing out.


The top level menu of this interface features a paged layout, somewhat like that of the iPod touch, although the YP-R1 can’t be used in portrait. Icons can be moved in a four by three grid or, if unwanted, removed entirely. Annoyingly, though, if you only want enough icons to fill one screen, the other two are still present, just empty.

To help fill those spaces TouchWiz also features a number of widgets, some more useful than others and all featuring some level of animation, which is a nice, if useless, touch (pun apologetically intended). Office consensus has it that neither the battery indicator, the mini-controller showing the current track and pause, next and back buttons is the best, nor even the Memo application which uses surprisingly effective handwriting recognition and will display a user-designated ‘top memo’ on the home screen. No, the best feature of the YP-R1 is Sleep Cat, on which you can tap to set a 30, 60 or 90 minute timer after which the player will turn itself off, but not before an animation of Sleep Cat dozing off has played – it’s simply adorable. 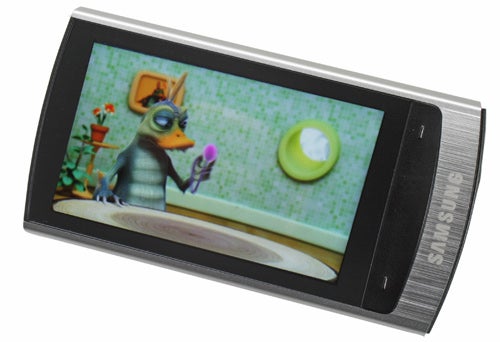 In all seriousness, about half of the widgets are functionally useless. The presence of three different clocks (digital, analogue and one showing the time in two different zones) seems a bit superfluous and while a gingerbread man holding a sign reading ‘touch me’ is all well and good, it’s rather annoying that he doesn’t do anything if you succumb to his request. Likewise a flower that sheds petals indefinitely when prodded serves as a distraction for a couple of minutes before being forgotten about.


Plus widgets sit above the actually useful menu icons, so if you aren’t careful you can end up hiding the Music menu under a calendar which will cause no end of confusion.

Much worse than some of the widgets is one of the headline additions to the YP-R1 – Beat DJ. A much hyped feature, this facilitates ‘scratching’ tracks, or adding various effects such as reverb or echo to them may well be the most pointless application on anything ever. Why Samsung makes such a fuss of this ‘feature’ I have no idea, because there’s a lot to like about the YP-R1; Beat DJ, however, just isn’t one of those things.


Other annoyances come from UI quirks which are clearly intentional, but for no obvious good reason. It makes sense, for example, that swiping left or right on the Now Playing screen should skip forwards and back, but surely swiping to the right should select the next track, not the previous one?


Navigating long lists could be easier. Swiping up or down does scroll in the way you’d expect, but if you hold the screen while doing so items fly past much faster than the speed you move your digit, which seems counter-intuitive to me. I’m not sure why playback controls are hidden on the Now Playing screen until you tap to reveal them, either.

For the most part, though, you’d only notice the YP-R1’s ‘problems’ if you’ve become used to the nuances of another touch-driven UI, such as that on the iPod touch and iPhone which is still significantly better than that of the YP-R1. In isolation, there’s little to complain about though and the occasional gem can be found.


My favourite is the Bluetooth screen which shows available devices circling around, which you then drag to the central YP-R1 icon to start pairing. It’s gimmicky, sure, but it’s also undeniably cool. Having long file names scroll across the screen on a press and hold is pretty inspired, too. Finally, if you’re like me and prefer a list to a slideshow parade of cover art when browsing music then the File Browser will be a regular port of call. 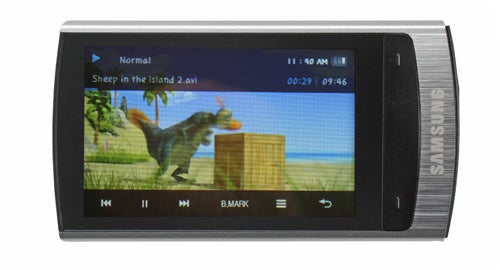 The presence of a voice recorder and FM radio won’t surprise anyone, given how many other features have been crammed into the YP-R1. Both of these work well enough, although I doubt anyone would actually have noticed their omission. Samsung claims the YP-R1 will cope with 30 hours of audio or five hours of video playback. Both of those estimates are pretty much spot on, until you start playing around with Bluetooth which drains battery life like it’s going out of fashion.


Format support is comprehensive. On the audio side MP3, WMA, Ogg, AAC, FLAC, WAV and ASF files are all playable as are DivX, XivD, MPEG4, WMV, H.264, ASF and RMVB videos – as long as the resolution is kept to 720 x 480 pixels or below. If it takes your fancy, the YP-R1 will display JPEG, GIF, BMP and PNG images, too.


While DivX support might seem a little superfluous on such a small player it’s actually pretty useful. Not having to re-encode all of those… um… home videos in order to put them on your portable player is a real time saver. Plus the screen on the YP-R1 is remarkably capable, producing deep blacks, vibrant colours and fluid motion. It’s definitely the best screen I’ve ever seen on this size of player.

The earphones bundled with the YP-R1 are a pleasant surprise in that they aren’t utterly terrible. Sure, anything listened to through them comes across a little (okay, a lot) muddied and somewhat lacking in presence, but it’s a rarity to get something included in the box with a portable player that wouldn’t be bested by a couple of paper cups and some string.


Plug in a good set of ‘phones and the results are much better. There’s a lovely warmth to the output of the YP-R1 and no shortage of low-down detail and high-end clarity. Massive Attack’s Teardrop has rarely sounded better on so small a player and on returning to an iPod nano for comparison it came across veritably sterile and lifeless. 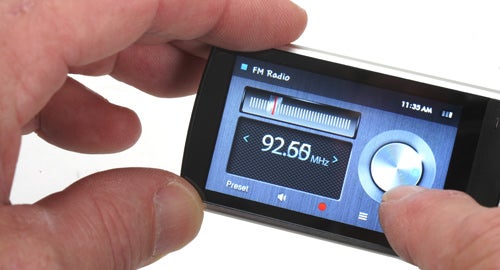 I’m not entirely sure that FLAC support is needed on this class of player. In a quiet room, with a good set of headphones it is possible to hear a bit more detail in some music but let’s face it, if you care about fidelity you shouldn’t be using a player like this to listen to your album collection.


The DNSe 3.0 sound processing is surprisingly good. A huge range of pre-sets are available, as well as an Auto option which, in theory will adjust the player’s output to suit whatever is currently playing. It doesn’t always work, but when it does it can have a genuinely positive effect. The player’s audio upscaler only seemed to do anything when I transcoded a couple of 320kbps MP3 files into 128kbps AAC, a level of degradation to which no-one should subject their music files. 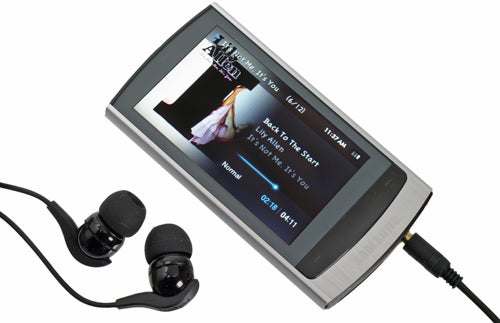 I’m not sure whether the YP-R1 could be said to sound better than an S Series Walkman, which costs about the same. Samsung’s player has a slightly richer sound, but Sony’s device is slightly more natural in its output so it’s more a matter of preference. If you look at the feature set, though, then the YP-R1 is streets ahead. The S Series has a smaller screen, is bulkier, lacks Bluetooth, is made from plastic, not metal and doesn’t have anything like the format support of the YP-R1.


The review sample was supplied by SamsungConnect, which is currently bundling a Linx B-Tube, Bluetooth speaker with the player. It’s a decent enough wireless speaker for when you don’t want to use headphones, but don’t expect it to fill a large room, or entertain at a party. However, the YP-R1 can be found for considerably less elsewhere online, so if you don’t need a wireless speaker, it’s worth shopping around.


Put simply, the YP-R1 is a delight to use. Its touchscreen interface is the best you’ll find on a device without an Apple logo, it’s attractively and well designed and, importantly, it sounds excellent. Plus, it’s almost ridiculously cheap compared to its rivals, especially when you consider how much functionality Samsung has crammed in.