I’ve got a lot of time for Samsung’s underrated YP-Q1 PMP. It might not have the style of the iPod nano or the awesome sound quality of Sony’s NWZ-S639F – and it also features some of the worst touch-sensitive controls known to man – but it’s a great sounding, decent looking player with a solid UI and better audio file format support than the Sony or Apple competition. Best of all, it’s relatively inexpensive, making it a decent PMP for anyone who can’t quite stretch to a Walkman or an iPod. Now Samsung brings us a sequel which – finally, and a lot later than I originally hoped – I’ve managed to get my hands on. Could we have a winner on our hands this time around?


Well, first impressions are definitely good. The YP-Q1 had a slick, elegant design, but the YP-Q2 is even better. At 49mm x 101mm x 10mm it’s very slightly larger than the Q1, but also slightly slimmer and lighter. The diamond shape that used to show the limits of the touch-sensitive D-pad has gone, leaving the player stripped back to the 2.4in screen, a metallic surround around the face of the unit and decals for the ‘back’ and ‘options’ menu and the Samsung logo. 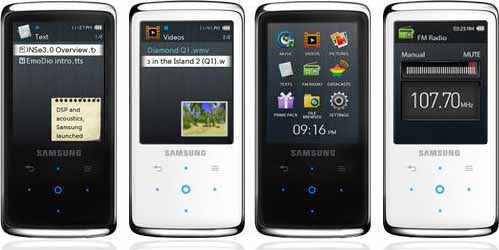 The rear now has a tough, textured, gloss finish and the unit as a whole feels more rugged than the Q1, though still not quite as robust as the aluminium nano or the practically bulletproof Sony NWZ S and X-series Walkmans. Otherwise, the main physical changes are the swapping of the old power/lock slider for a dual-function power/lock button and a user-definable key which you can assign different functions depending on the current mode the player is in. Annoyingly, Samsung has stuck to its proprietary USB connector, but otherwise all seems to be ship shape.


Admittedly, I was a bit concerned to see the Q1’s touch sensitive controls return; it’s always better to have a simple, button-based control system that actually works over a flashy alternative that doesn’t. However, this time the controls are a lot less over-sensitive, and a lot more predictable. Cool blue LED indicators behind the panel show clearly where you can find the cursor and select keys, and the smaller areas used actually make the YP-Q2 easier than its predecessor to use, rather than harder. Couple this with an interface that’s essentially a more colourful refinement on the perfectly logical one found on the YP-Q1, and you have a player that’s practically a pleasure to find your way around.


Navigation by ID3 tag is simple and pain-free, and there are useful options like the ability to set intervals between tracks or create playlists on the fly. The UI also has a few stylish touches, like near full-screen album art and a range of groovy visualizations in the Now Playing view, not to mention the ability to use the touch-sensitive controls to sweep left to right through tracks in the same album or albums by the same artist. In this arena, at least, Samsung is comfortably ahead of most Far-Eastern rivals.

One of the Q1’s biggest assets was its bright 2.4in 320 x 240 screen – one of the largest displays of any PMP in this class. The same holds true of the YP-Q2, and whether you’re watching TV, movie or photo content, you’ll get a clear, vibrant image with plenty of punch that’s visible in most lighting conditions. This should, theoretically, make the Q2 a great player for video content, but unfortunately not all is quite as it should be. For one thing, file format support is now a bit behind the curve, with only WMA and Samsung’s own SVI format handled. Interestingly, the specs claim MPEG-4 support, but it turns out that this only works if you convert the file using Samsung’s Emodio media management software first, and even then I saw some nasty, choppy frame rates when attempting to play converted movie files back.


More seriously, while the Q2 claims to have full iPlayer support, I’ve had poor results so far. Freshly downloaded files which will play happily on my Q1 refuse to play on its successor, coming back with a File Not Supported error message. I’ve tried copying using straight folder to folder drag and drop and syncing using both Windows Media Player and Emodio, and nothing seems to work. As Samsung is sticking ‘Works with BBC iPlayer’ stickers on the packaging and all sites selling the Q2 are making the same claims, I’m going to charitably assume that either a) there’s a problem with my particular Q2 or b) this is a known issue that’s being ironed out as we speak. I’d be lying if I said that this didn’t concern me, though. 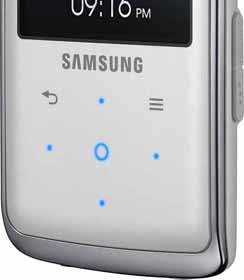 Otherwise, the Q2 matches its predecessor feature for feature. The FM radio is one of the more sensible efforts on a PMP, offering decent reception, good audio quality and the ability to automatically set preset channels from within the radio mode itself. The voice recorder is perfectly adequate for most needs, we get decent text and photo viewers, complete with slideshow, and the Q2 even fits in a trio of mildly entertaining puzzle games.


Still, above all else the Q2 is an excellent audio player, and easily the best I’ve listened to since Sony’s awesome sounding NWZ-X1060 X-Series Walkman. Like the YP-Q1 before it, the Q2 features Samsung’s DSNe 3.0 audio enhancement technology, combining a range of EQ settings with some understated 3D audio effects and an ‘Audio Upscaler’ feature designed to compensate for the effects of MP3 compression. It seems to work as I’d say that the new player sounds slightly better than the old one. Bass is deep and rich but also articulate, the mid-range is punchy and at the top end there’s no shortage of detail or ‘sparkle.’

Up until recently I’ve tended to switch audio enhancements off, as I’m not a big fan of unnatural, heavily processed sounds. This year, however, a few players have surprised me, and the Samsung is another where I’m happy to leave them on. Even if you insist on using the mediocre earbuds supplied you’ll find the output quite listenable. Connect some better cans – this week I’m using the lovely SoundMagic PL50 earphones and my Grado SR60i headphones – and the YP-Q2 is capable of some truly excellent results.


Looking for Nothing, from Aimee Mann’s @#%&*! Smilers is delivered with its thumping, sixties-flavoured bassline, nuanced vocals, discrete strings and warm electric piano and organ sounds all perfectly balanced and wonderfully clear. Public Enemy’s By the Time I Get to Arizona is as bass-heavy and brimming with anger as you’d want it, the YP-Q2 packing in the heavy beats, loping bassline and carefully orchestrated samples with real precision.


The more restrained delights of Alison Krauss’ folksy bluegrass are handled with just as much grace, finger-picked acoustics cutting through with superb definition and the vocals coming through so clearly that you can hear the intakes of breath between lines. The Q2 also delivered a great performance with Gidon Kremer’s take on the tango of Astor Piazolla, plucked double bass and accordion providing a sparse backing for Kremer’s mournful violin. 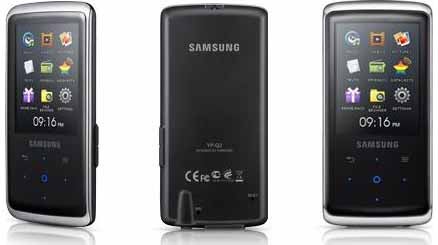 It’s always a good sign when I forget what I’m supposed to be doing and spend time running through a player’s media library to see what else I’ve put there and give it a spin. Last night the Q2 kept me up for a couple of hours past bedtime doing just that, and I can’t say that about, say, the slightly inferior Creative Zen MX or Samsung’s own YP-U5. On top of this excellent performance, the Samsung also wins points for format support (Hello FLAC! Nice to see you OGG!) and excellent battery life – 50 hours for audio, albeit with a rubbish 4 for video.


For me, this is enough to make up for the YP-Q2’s rather less impressive efforts with video, and if you want a PMP primarily for audio playback, then it’s hard to beat Samsung’s latest in terms of value. Unfortunately, that’s ‘hard’, rather than ‘impossible’. Looking around, I note that Sony’s S-Series Walkmans are currently doing the rounds at very similar or lower prices, for the same capacity, offering equivalent sound quality and better bundled headphones to boot. If you were interested in a great audio/video all-rounder, meanwhile, then the extra cash splashed out on Samsung’s own YP-P3 would be money well spent. This leaves the YP-Q2 a thoroughly decent budget PMP – and certainly a better choice than Creative’s similar Zen MX – but, for all Samsung’s efforts, not a world-beater.


Despite some caveats about video playback and file format support the YP-Q2 is an improvement on the already good YP-Q1, and one of the best budget PMPs around. However, with competition so aggressive at this price point, it’s still possible to do slightly better for the money.