Up until now Samsung’s success in the TV, mobile phone, monitor and laptop markets hasn’t really been matched by its portable audio division. True, we’ve seen some glamorous and innovative players, and Samsung is nothing if not a prolific manufacturer, but we’ve yet to see a Samsung player that could really capture and hold our attention – until now. As you might have noticed earlier this week, our own Gordon Kelly was rather taken by the YP-Q1 Diamond. He’s not alone. This isn’t a perfect PMP by any means, but it’s strong competition for the excellent Sony Walkman NWZ-639F and iPod Nano.


It is, of course, a bigger unit than either, nearly a centimetre taller than the Sony, a good 5mm wider and approximately 2mm thicker too. Size-wise, it’s actually quite similar to the old iPod Mini, though the all plastic construction keeps the weight down to a reasonable 61g. The unit doesn’t feel as bullet/bomb/impending nuclear apocalypse proof as the Sony, but it still feels very robust and has survived a few days in a crowded pocket scratch-free. The design, meanwhile, is gorgeous and elegant, with the touch-sensitive controls keeping clutter to a minimum. The only things to break up the harmony of case and screen are a power slider on the right-hand side and the headphone socket and annoyingly proprietary USB connector on the bottom. 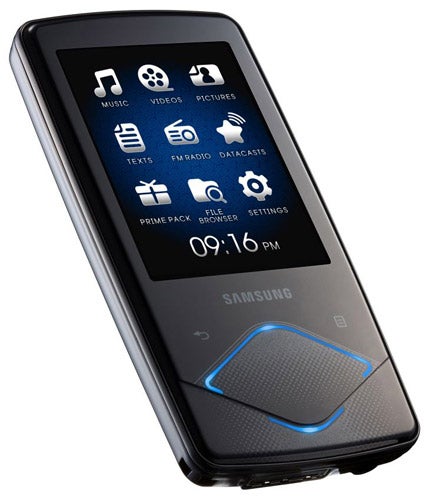 The key benefit of the larger size is the larger 2.4in screen, and – make no mistake – this one is a beauty. It’s really bright. The colours are fantastic. The 320 x 240 resolution is almost perfectly matched to the display size. Viewing angles aren’t ideal with dark colours losing contrast almost as soon as you tilt the player in any direction, but given that this is a personal media player I’m not sure that’s a huge issue. WMV video playback is flawlessly smooth, and the Q1 also supports MPEG-4 files once they’re converted to Samsung’s (again) annoyingly proprietary SVI format. And with the Q1 being compatible with BBC iPlayer, you can – and I have – watch a whole episode of ”Top Gear” on the thing with something approaching comfort. There aren’t many other PMPs this small I can say that about.


Now, Samsung has taken pains to complement the screen and the physical design with an equally attractive interface. It’s a little like a slightly more glamorous version of Sony’s current Walkman UI, but it comes with a handful of very interesting extras. A picture browser, podcast support and FM radio, all very functional, are becoming standard features these days, but the Q1 also includes a text reader, Subway maps for major American, European and Asian cities and three games, including an excellent Columns-style block puzzle title.


On top of this, you can customize the UI using Samsung’s EmoDio software, as well as convert video and audio files to supported formats and – somewhat bizarrely – transform text files into spoken word MP3. Browsing for music is a little dull for anyone used to Apple’s CoverFlow, but with the ability to browse via ID tag or folder you certainly won’t struggle to find tracks, and you can create custom playlists from within the Q1’s interface – one of the few remaining niggles in the current Sony line-up. It’s also worth noting the visualisations – probably the most attractive and hypnotic I’ve seen on a PMP in ages.

However, there’s one aspect of the Q1 experience that takes some getting used to, and that’s the controls. There’s a sort of raised diamond-shaped area below the screen that acts as a touch-sensitive D-pad and selector, along with back and menu buttons above it. In theory it works in a similar way to the almost identical layout on the current Walkmans, but in practice the diamond pad is a little unpredictable. At times, particularly while on crowded public transport, you’ll end up pressing the back button when you mean to go left, pressing up when you mean to go right, pressing options when you want to go up, and so on.


Annoyingly, this happens a lot when you’re playing the columns clone, turning one of the best built-in games I’ve encountered on a PMP into a bit of a nightmare. As with most oddball control systems it’s something you do learn to work around, but while the touch controls help the Q1 achieve its cool look, you can’t help wishing for something a little more prosaic that works more effectively. 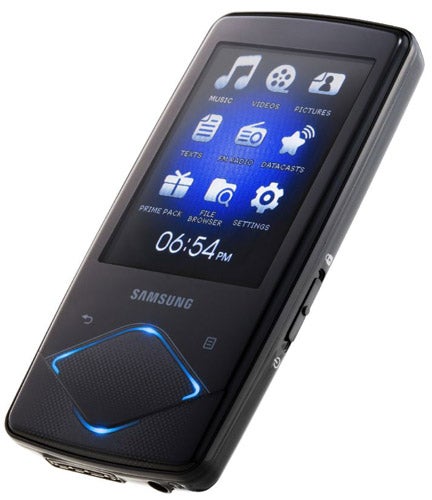 And here’s another area where the Q1 falls down. Why, oh why, do reputable manufacturers like Samsung still produce supposedly premium quality MP3 players then bung a useless pair of earbuds in the box? Were you to judge the Q1 on the sound output from the supplied earpieces you would not come away impressed. The sound is clear but lightweight; there’s some bass, but no body, a reasonably wide soundstage, but no definition of instruments. Buy a Q1 and use the supplied buds and you really might as well have bought a cheaper, inferior player.


Plug in something better, like the Denon canalphones I use for reference, and it’s a very different story. The sound isn’t as aggressively punchy as the output from the Sony NWZ-639F but it has a fantastic roundness of tone to compensate. Listen to Justin Timberlake’s ”LoveStoned” and the Sony has the edge for bass and definition, but there’s something very warm and coherent about the way the Samsung delivers the track, and there’s still detail to spare. 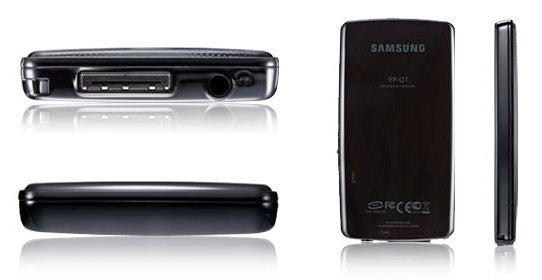 Play Radiohead’s ”All I Need” and the low bass notes and drifting feedback seems to envelope you in a mildly unnerving blanket of sound, only giving way to the higher, bell-like tones and thumped piano chords that come through later as the drums pick up. The Sony still has the edge on clarity at the messy end section of the song, but there’s really not much in it.


The Samsung’s tone also works well for other musical genres. The clear piano and warm vocals of the Tony Bennet/Bill Evans album sound particularly good, with the Q1 capturing the intimate, small venue tone and the exquisite chord-work that characterises Evans’ playing. The performance with Wagner’s ”Tristan and Isolde” is equally impressive. Where lesser players veer between clumping every instrument in the string section together or resolving them as an overly strident racket, the Samsung holds onto the rich textures while still giving the instruments room to breathe.


The ”Prelude to Act 3”, less overwhelming than the ”Act 1” prelude, sounds as glorious as its going to get without a headphone amplifier and a good set of proper, full-sized ‘phones. Again, you could say that the Walkman’s output is slightly stronger on the dynamics, but the Samsung has a slightly more coherent overall tone.

The Q1’s sound has other things going for it as well. I usually shy away from audio enhancements, but the dynamic upscaler genuinely seems to breathe a little extra life into any more obviously compressed tracks, while the DNSe enhancement mode offers – for once – some listenable EQ and reverb presets and an automatic function that does a decent job of picking the right one for the current track.


Best of all is format support. The Q1 supports MP3 and WMA as you might expect, but also OGG Vorbis and everyone’s favourite lossless format, FLAC. At first I wasn’t sure that the player did play FLAC. Samsung’s literature is slightly unclear on whether all Q1s sold in all territories support the format, and when copying some FLAC files over, Windows threw up a shirty message stating that the files would not play back on my device. Luckily, the Q1 knew better, and my FLAC rips of Doves’ ”Lost Souls” and Outkast’s ”The Love Below” played back without a hitch. 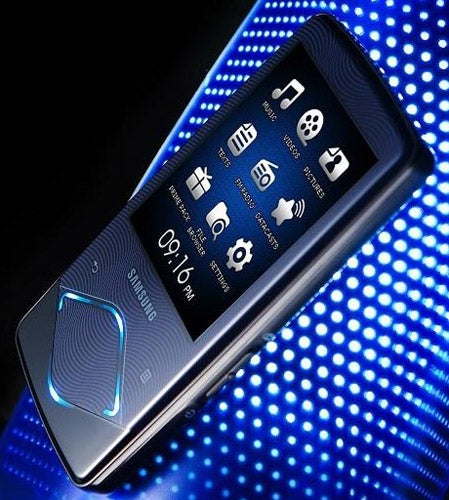 Can you tell the difference between a FLAC file and the 320K MP3 equivalent on the Q1? Well, with the Denon ‘phones you can – just about. It’s easier to pick out the emerging layers of orchestration in Doves’ ”Firebird Suite”, while there’s a presence to the chiming guitar in ”The Man Who Told Everything” that the MP3 version can’t quite match. The question is, would you notice this difference enough to rip all your files to FLAC for the daily commute. Unless you want half the songs or less on your PMP, probably not.


This is a tough call. The YP-Q1 is a strong player – arguably Samsung’s strongest yet – and at £100 for the 16GB version it offers excellent value for money. As a video player or a vehicle for watching downloaded iPlayer material, it’s a stronger contender than either the Sony NWZ-639F or the iPod Nano (though the lack of built-in format support might change your mind).


However, if music was my main priority I’d still opt to pay £15 more, do without FLAC support and get the much better bundled headphones from the Sony, particularly given its smaller form factor and more usable controls. For that reason we’re holding back on a recommendation this time around, but if your priorities are different, then give the Samsung an audition a.s.a.p.


With excellent audio quality and a fine set of features this is Samsung’s finest player yet. However, while the larger screen means the Samsung is a better PMP for video, the Sony NWZ-639F has a slight edge when it comes to audio.