A few weeks ago I reviewed the Samsung Q35 and really liked it. With the Q35 Samsung had managed to marry a full feature set with a slim and light chassis, making it a very desirable product. But not everyone wants a very small machine with a correspondingly small keyboard and screen. The X60 addresses those users and provides more features and usability, but in a correspondingly larger package.


Last year I looked at the Samsung X50 and although I liked it, it didn’t quite manage to differentiate itself from the plethora of widescreen 15.4in notebooks on the market. The X60 is still battling in the same space, but Samsung has made some significant improvements over the X50. 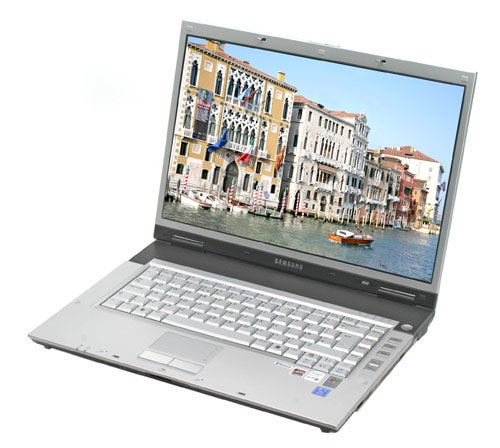 This particular X60 is pretty much fully loaded. Samsung has squeezed in an Intel Core Duo T2500 CPU running at 2GHz, and this is backed up by a generous 2GB of RAM. There’s a capacious 100GB hard disk, which should keep even the most space hungry user happy. But if you do want to free up some space on the hard drive, you can make use of the integrated dual layer DVD writer.


The X60 is finished in Samsung’s regular matt silver with black detailing – it looks good, but not what I’d describe as drop dead gorgeous. Lifting the lid reveals a 15.4in widescreen display with a high contrast glossy coating. As always I’ll mention that opinions tend to be split on these coatings, but I quite like them and find the more vivid colours and brighter image a bonus. This particular screen is a fine example and doesn’t suffer from excessive reflections in environments with multiple ambient light sources. Samsung has also done the smart thing and used a screen with a 1,680 x 1,050 resolution, making sure that you’ve got loads of desktop real estate – I’ve seen many 15.4in notebooks that have a 1,280 x 768 resolution, which represents a poor use of physical size. 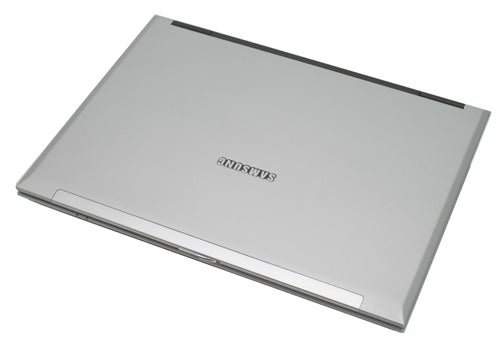 The screen is driven by an ATI Mobility Radeon X1600 graphics chipset with 256MB of dedicated memory. This means that the X60 should be able to turn its hand to the odd bit of gaming, although as our 3D gaming tests show, you may have to drop down from the native resolution if you want decent frame rates.


The keyboard is a decent full size affair that’s slightly recessed into the chassis. There’s a good amount of travel in the keys and a solid break ensuring a fast and comfortable typing rate. The Shift, Caps Lock, Tab, Return and Backspace keys are all large, as they should be. Unfortunately the Fn key is located in the bottom left corner where the Ctrl key should be, but to be fair to Samsung a great many notebook manufacturers do the same thing. 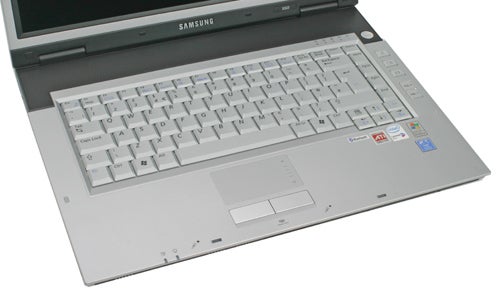 Below the keyboard is a touchpad with a widescreen aspect ratio to match the display. The right side of the touchpad can be used for scrolling vertically through web pages or documents and Samsung has labeled this accordingly. There are two brushed silver buttons below the touchpad that respond with a solid click when pressed. There’s no fingerprint scanner between the buttons as seen on the X50 though.


Either side of the touchpad are microphones. Samsung’s decision to use two microphones in an array is a good one, and means that the quality should be greatly improved when using VoIP services without a headset. Samsung used a similar setup with its Q1 UMPC to good effect.


To the right of the keyboard are controls for Samsung’s AVS media playback environment. From here you can listen to music, view photos or watch video. AVS has been around on Samsung notebooks for some time now and it works reasonably well, although its video codec support is somewhat lacking. A nice touch is the inclusion of an infrared remote control for AVS that sits snugly in the PC Card slot for ease of transport. 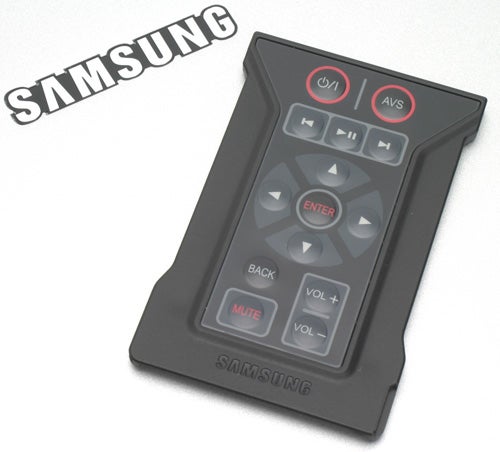 Samsung has connectivity well taken care of with an Intel PRO/Wireless 3945ABG Wi-Fi adapter supporting 802.11a, b and g. There’s also a Broadcom Bluetooth 2.0 module and an Intel gigabit Ethernet controller. And just to round things off, there’s a 56k modem thrown in for good measure.


On the right side of the chassis you’ll find the integrated DVD writer, a single USB 2.0 port and a hardware switch for the wireless adaptors. The DVD writer supports all the major formats bar DVD-R DL, but on the plus side it does support DVD-RAM. At the front is an infrared port and a card reader that accepts MemoryStick, SD, MMC and xD formats. 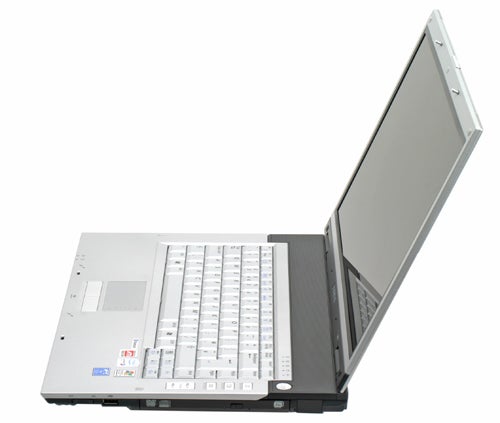 You’ll find a single Type II PC Card slot on the left. There’s no sign of an Express Card slot, but since there’s still no Express Cards available, this isn’t a huge problem and I’d rather have a PC Card slot so that I can use a 3G data card. Also on the left are microphone and headphone ports, a modem socket, a four-pin FireWire port and a D-SUB port for connection to an external monitor. The latter is slightly disappointing as I would prefer to see a DVI port on a high end notebook like this. 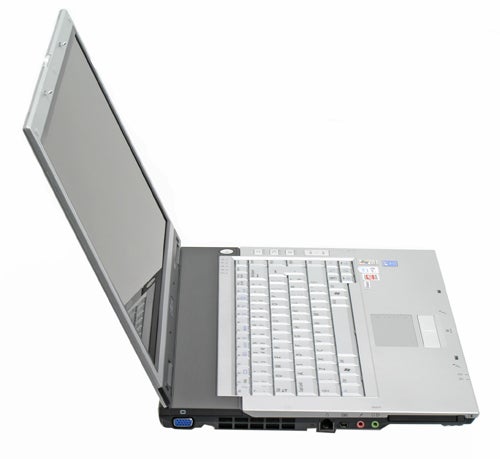 There are two more USB 2.0 ports at the rear along with an S-Video output, an Ethernet port and the power socket.


Performance was a little disappointing on the X60. Running SYSmark 2002 I got an overall score of 294, which although not bad is considerably lower than the Acer TravelMate 8204WLMi that I looked at back in January. Likewise, the battery life of 170 minutes is a little below par, and I would have expected the X60 to last over three hours at the very least – again the Acer managed to pull ahead of the X60. PC Mark proved to be far more even and there was very little between the two notebooks running this test. 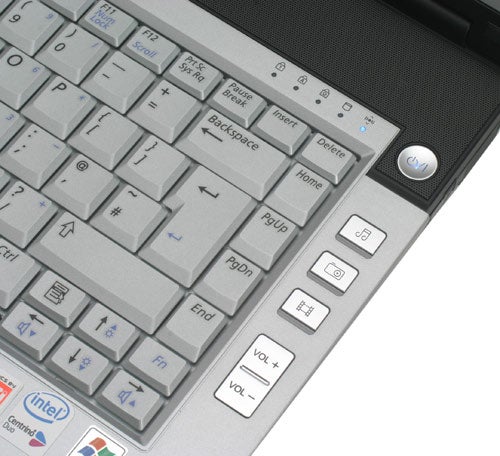 In the X60’s favour though, even though the Acer is over six months old, it’s still over £100 more expensive, while also being half a kilogram heavier. For many users that extra weight could make all the difference – at 2.5kg, the X60 is fairly light considering the specification and 361 x 265 x 34mm (WxDxH) dimensions.


With a price of £1527.48 including VAT the X60 isn’t cheap, but it’s not overly expensive either considering what you’re getting. The only problem is that the competition is fierce in this sector and there are a great many similar machines on offer from big name manufacturers to tempt you. 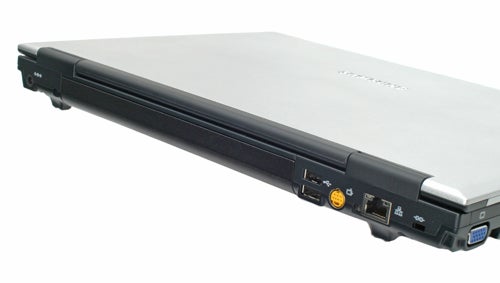 
The Samsung X60 is a very good notebook, that’s undeniable. Despite not being as fast as competing products, unless you’re in the habit of running seriously hardware intensive applications, the X60 will be more than a match for anything you’re likely to throw at it. However, the battery life does concern me and I would have expected better from this machine.


Specification wise, you’re getting pretty much everything that you could want along with good design and a solid build quality. The screen is particularly good and at a push the X60 could even fulfill your gaming needs.


I don’t think that the price is unreasonable for what’s on offer, but then I’ve come to expect good value for money from Samsung. Ultimately though, the poor battery life and to a far lesser extent the disappointing performance figures, rob the X60 of a recommendation.