Having previously looked at the 13.3in Samsung X360 it’s now the turn of its larger and arguably more practical cousin, the X460. Though it has a similar slim and light emphasis as the X360, measuring as little as 21.2mm at its thinnest point and weighing just 1.9kg, it is based on a substantially larger 14.1in display and as a consequence features a full-fat Intel mobile processor and also an integrated optical drive. Given these two facts, its sub-2kg weight is quite some achievement and one that certainly gives it the edge over machines of a similar form factor. This weight also sets it against some 13in machines while the price, just under £900 in some places, makes it a tantalisingly affordable option, too. 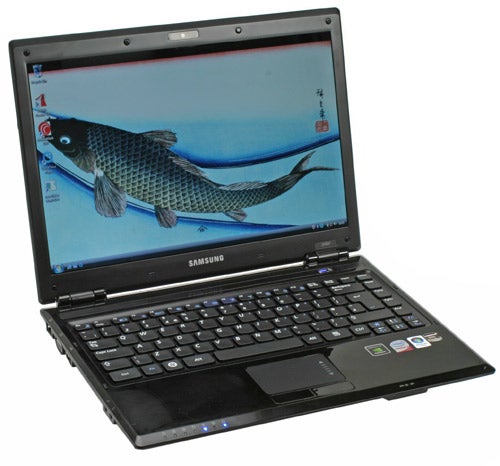 As far as styling goes the X460 is more or less identical to the X360 save for its larger frame. On the lid it has the same brushed metal and glossy black combination, though our version here comes in black rather than the red of the SSD equipped X360. This lends the X460 a classy but restrained appearance, though we’re still not especially keen on how the glossy black finish is continued on the inside as well since it’s a magnet for grease, dust and fingerprints that quickly begin to annoy.


One slight change on the inside, however, is a strip of black metal above the keyboard that’s punctuated by speaker grills for the two 1.5W speakers and a small rectangular power button. Combined the speakers don’t provide a great deal of punch, so you can rule out listening to music on them, but for the occasional video clip or demonstration they are perfectly adequate. 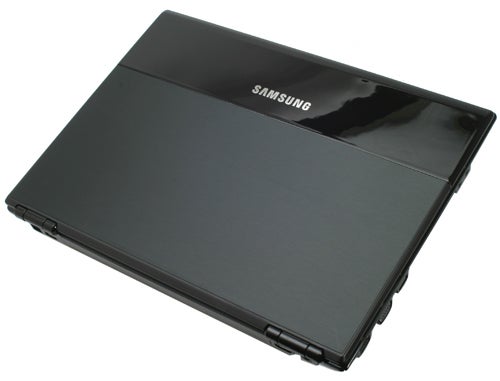 The keyboard also sees a small alteration with the addition of Home, Page Up, Page Down and End keys along the right-hand side. This is a logical use of the extra space and adds a little extra functionality to what was an already superb keyboard. Its isolated style keys are large and user-friendly, respond crisply and evenly, while the layout is without any obvious fault. This makes it a joy to use for regular typing duties and you’ll quickly be up to normal speed when using it.


Regrettably this positive experience is somewhat dented by a rather silly oversight. Despite the keyboard being slightly off-centre to account for the Home to End keys, Samsung hasn’t seen fit to move the touchpad. As a result we often found our right hand jogging the scroll zone when typing, with predictably irritating results. This is less of a problem if you tend to type with your hands hovering above the keyboard, rather than utilising what should be the wrist rest, but it’s the kind of small issue that should be avoided. 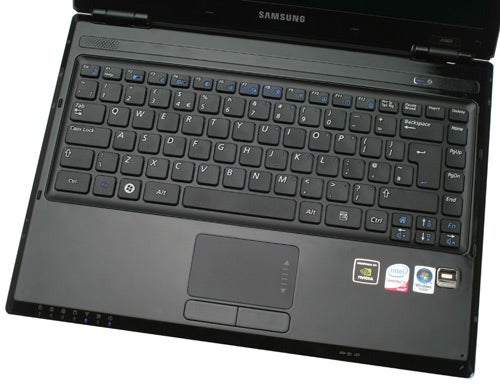 This aberration aside the basic design and build of the X460 is very strong. There are no annoying creaking panels, very little flex in the keyboard and though the glossy finish won’t suffer bumps and scrapes gladly, the machine itself shouldn’t suffer terribly even if there’s no SSD option or shock protection on the hard drive for heavier falls.

Internally, Samsung has the done the typically thorough job it normally does. At the heart of it all is an Intel Core 2 Duo P8400 running at 2.26GHz with a 1,066MHz front side bus and 3MB L2 Cache. This is backed by 3GB of 1,066MHz DDR3 RAM and a 5,400rpm 250GB SATA hard drive. Graphics, meanwhile, are provided by an nVidia 9300M GS with 256MB of memory. This offers enough graphical grunt to run TrackMania Nations Forever at medium detail at around 40 frames per second. Even adding a couple of samples of anti-aliasing didn’t make the frame rate dip below 30, so World of Warcraft, The Sims or Spore would pose no problems, nor would Football Manager 2009 for that matter. 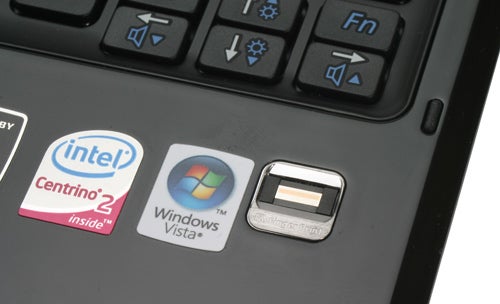 Besides these basics you’ll find all the usual stocking fillers, including Draft-N Wi-Fi courtesy of Intel, Gigabit Ethernet and Bluetooth 2.0+ EDR. There’s also TPM 1.2 (Trusted Platform Module) and this is paired with a fingerprint reader to offer secure authentication and encryption.


This, combined with the docking station port on the underside of the machine, means the X460 has some business credentials; making it ideal for the executive, entrepreneur or home worker who fancies something a little more interesting than your regular business notebook. 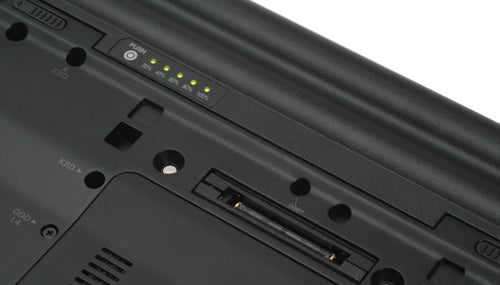 Even if you don’t use a docking station the X460 shouldn’t let you down. There are three USB ports, one on the left, one on the right and one on the back, while all the basics, like a 34mm ExpressCard slot, VGA, headphone and microphone ports, are present.

On the front there’s a 7-in-1 memory card reader, supporting MemoryStick, MemoryStick Pro, SD, SDHC, MMC, MMC Plus and xD card formats, while an HDMI port can be found at the back. As with the X360 the lack of an e-SATA port is a little disappointing, but we’re not about to pillory it just for that; just gently growl our disapproval…grrrrr.

Perhaps most importantly there’s also an optical drive in the X460, making it an obvious port of call if you fancied an X360 but couldn’t quite reconcile yourself to the loss of an integrated DVD drive. We should add, too, that it’s a very well integrated one. On some thin and light machines the optical drive can wobble around like it’s not really meant to be there, but there are no such problems on the X460. Apart from this it’s a pretty ordinary DVD Re-writer, though it does have LightScribe label burning support.

The X460 performed very capably in all our benchmarks; comparing well to the similarly specified Sony VAIO Z11WN/B and the configuration of the Dell Latitude E6400 we reviewed in October. This theme is true in both PCMark Vantage and our own in-house image editing and video rending benchmarks and ultimately the X460 should deal comfortably with most tasks. 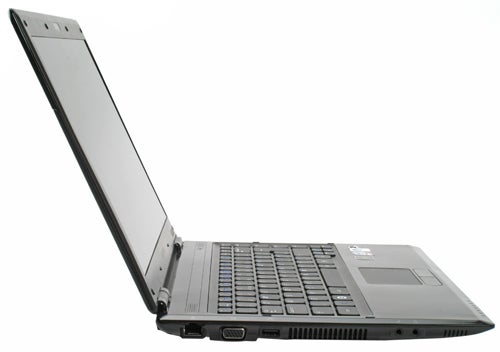 Battery performance, using MobileMark 2007, also shows the X460 performing well. It does trail the E6400 by around 30 minutes in the Productivity and Reader tests, but the E6400 has lower power Intel integrated graphics and a heavier higher capacity battery. Fundamentally, however, ten minutes shy of four hours of multi-tasking and four hours and 13 minutes of low intensity use are both good results that could be bolstered by more rigorous power saving measures.


Just less than two and a half hours of DVD playback at 100 per cent brightness is also a good result and excluding this test the X460 outperforms the Sony by 5-10 per cent. This isn’t a massive difference and doesn’t take into account the variety of power management options the Z11 does have and that weren’t active during our testing, but head-to-head a difference does exist and the X460 is obviously significantly cheaper, too. 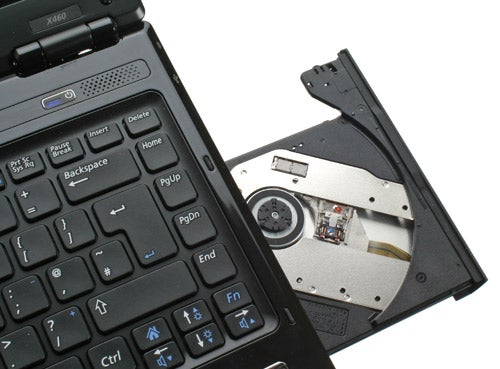 Unfortunately the X460 is let down by the one thing that also hindered the X360: its screen. Most disappointing is the resolution; just 1,280 x 800 despite the significantly larger acreage. It also has all the same issues as the X360, including mediocre colour fidelity, particularly poor low saturation colour production and a generally washed out appearance. One thing it does have in its favour, however, is astonishing brightness levels; something it needs in bright conditions due to its reflective glossy finish.


Were it not for this and the silly oversight regarding the touchpad placement the X460 would probably be walking away with an award. As with the X360 the keyboard is the highlight, proving well arranged and comfortable for typing, while the basic feature set and pricing are very attractive given the powerful functionality and sub-2kg weight. Unfortunately, these two issues and Samsung’s continuing fondness for all things glossy mean it does lack a little of the refinement found in more mature products. 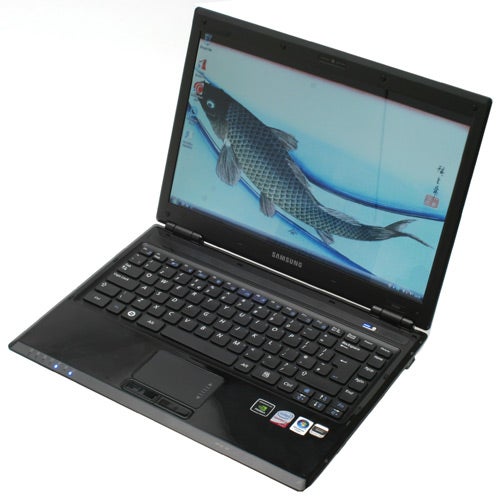 
An excellent all-purpose notebook that boasts a competitive price and good portability, the X460 is only let down by a merely okay screen and some design quirks that could do with remedying.