Samsung made a big splash in the netbook market when it released the still excellent NC10. It came to the market late and learnt from the mistakes of others, producing a product that (at the time) fulfilled all the needs and desires of consumers. It appears to be taking a similar approach to the burgeoning CULV segment – an idea Acer helped test run with the likes of the Acer Aspire Timeline 4810T – with the X-Series. This new range comprises 11.6-, 14- and 15.6-inch models and we’re kicking off with the baby of the range, the 11.6in X120.


There are currently two variants of the X120 available: the JA01UK we’ve got and the FA03UK. Of the two you’ll definitely want the former, which is the same price as the FA03UK but has Windows 7 and a dual-core processor against Vista and a single-core processor. We’ve been told the other model was a pre-Windows 7 version, so you may find it being discounted quite soon as stock is rundown. You’d have to have rocks in your head to go for it at current prices!


Our version of the X120 is powered by a dual-core Intel Pentium SU4100. It runs at 1.30GHz, has 2MB of L2 Cache and is supported by an ample 3GB of system memory. A 250GB hard drive provides the storage and graphics come courtesy of Intel’s GMA 4500M HD integrated chip. Wireless-N Wi-Fi is included for speedy wireless performance, as is Bluetooth 2.1 + EDR for peripherals, though wired networking is the standard 10/100 LAN rather than the faster Gigabit variety. Most people will use Wi-Fi, though, so the latter isn’t a great concern. 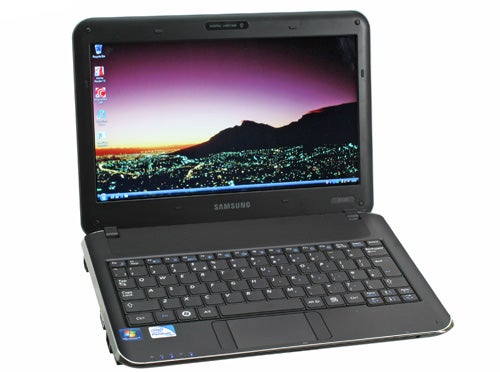 Of greater import is the design, durability and portability of this 11.6in machine and here Samsung has done a great job. It starts with the slick and elegant silver lid, which doesn’t reveal grease and dirt as vociferously as the glossy black finishes on most Samsung laptops. Slightly elevated edges on the main body of the machine help the lid merge seamlessly with it; a fact accentuated by the faux-chrome accenting that lends the X120 a classy, refined appearance. A weight of just 1.36kg means the X120 is no heavier than most netbooks despite being larger, but this slightness isn’t the product of poor build quality: the X120 is very well screwed together. 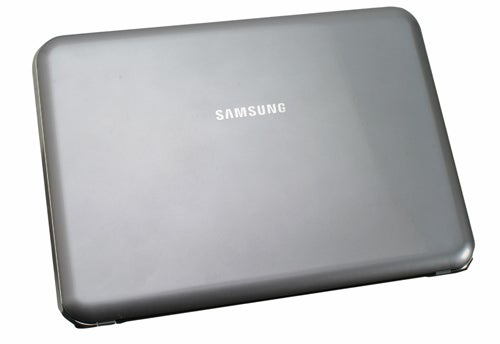 Samsung continues to win brownie points by using smooth, matte black plastic on the inside. Not only does it look and feel good, it’s also durable and easy to maintain. That said the display still retains the ever polarising glossy finish, which is prone to smudges and is quite reflective, but it can boast a roomy 1,366 x 768 native resolution. Being LED backlit it’s also quite thin, as is the machine itself at 25.4mm thick, though the lack of an optical drive aids this, too. Again, the thinness is accentuated by the well-placed curves and aggressively tapered edges, though it does mean the various ports jut out awkwardly. That’s about the biggest complaint that can be made of the design, though, so suffice to say this is a good’un.

Another important design related aspect on any laptop is the keyboard and touchpad. Samsung has a pretty good record on both fronts and the X120 does little to dent its reputation. Samsung has been smart in positioning the keyboard lower down the chassis. This does leave less space for the touchpad, necessitating placing the buttons either side of it, but means the keyboard is optimally positioned for comfortable typing.

As for the keyboard itself, it’s very good. It has a sensible, logical layout, with a half-height top row of keys and slightly withdrawn cursor keys flanked by Page Up/Down keys. Were we nitpicking, the key actions could be snappier, but by normal standards – not our “if it’s not a ThinkPad it’s crap” standards – this is an excellent keyboard. Aside from the abnormal buttons the touchpad is fine, too, and after a few weeks the button placement will become second nature.


Moving one’s gaze upward (to the screen, not the sky!) the 11.6in display is another triumph. It might not hold up to the very highest standards, but at this price brightness, sharpness and resolution are the key factors and in these it passes with flying colours. And, while the 1,366 x 768 native resolution on this size screen does produce a very low pixel pitch – making text quite small, it’s still perfectly readable (more so than this resolution on a 10in screen is) and Windows 7’s DPI options can alleviate any issues you do have.

For connectivity you get three USB ports and audio jacks (1x headphone, 1x microphone) on the right, a memory card reader on the front, and HDMI, Ethernet, and VGA on the left. This covers the basics perfectly well, but an eSATA/USB port or a ‘sleep & charge’ USB port would be nice. Indeed it’s a surprise you don’t at least get the latter; Samsung has had it on other notebooks and Toshiba even had one on its N200 netbook, so why they hell not here, eh?

One thing we weren’t expecting from the X120 was great speakers. Not just because it’s small, either; even the far from small Samsung R620 had speakers whose fidelity was akin to two goats with laryngitis. So, while bass is pretty much absent, the two 1.5W speakers manage to reach decent volumes without distorting horribly, making them fine for video clips and the like.

Subjectively the performance of the X120 is very good. Its dual-core processor and Windows 7 combine for snappy general use that rarely falters. Most importantly, though, it can handle all forms of video thrown at it. We had no problem playing 720p and 1080p H.264 and VC-1 encoded videos in Windows Media Player 12, which now supports GPU acceleration for all of the above. CPU utilisation varies depending on the codec and bit-rate, hitting as high as 30 to 40 per cent for very high bit-rate VC-1 to as little as five per cent when dealing with H.264 HD trailers. Flash video isn’t accelerated yet, but the CPU can handle it on its own so there are no problems there, either.

This excellent subjective performance is borne out in our benchmarks. Compared to the Medion Akoya E3211, which uses the single-core variant of the CPU found in the X120, the Samsung is more or less bang on twice as fast overall. This might seem like an obvious correlative, but twice as many cores doesn’t always equate to twice the performance. Acer’s dual-core netbook, the Ferrari One, is also bested to the tune of 30 per cent, though it remains an outstanding performer when compared to its genuine peers.


Despite its prowess, though, any CULV laptop – particularly one as portable as the X120 – will be judged by its battery life and it is here that we hit a rather large snag. To help retain the X120’s svelte shape and portable weight, Samsung has given it a weedy four-cell, 4,000mAh capacity battery. 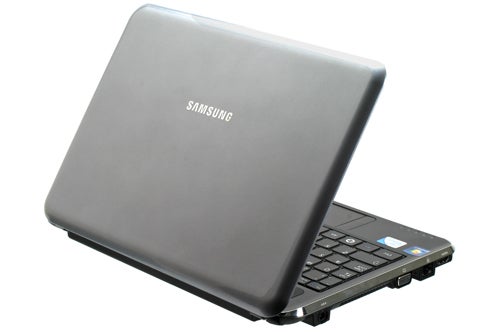 We’ve seen netbooks return good battery life with small batteries before, but thanks to its more powerful CPUs the X120 can’t repeat this feat. While three hours or so might be possible under ideal conditions, in our tests the X120 managed a below-par two and a half hours. This might be enough for a short commute, but this kind of laptop ought to be aiming for closer to four hours at the very least. Samsung will be selling a higher capacity, six-cell battery at a later date, but that’s still an extra cost to factor in.


This disappointing outcome tarnishes an otherwise excellent product. If battery life is a lesser priority, or you’re willing to pay extra for an extended battery, then the X120 is still a very good option. However, out of the box, it doesn’t deliver the goods. 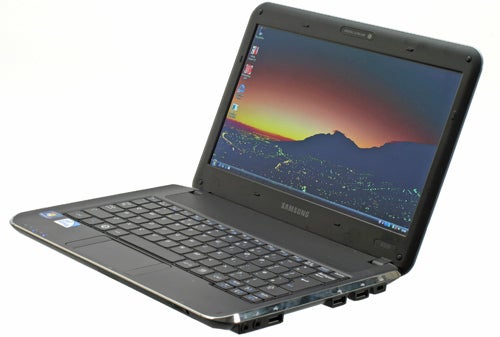 
Samsung’s first CULV laptop scores well in the design and performance stakes, but is let down by poor battery life for a segment that’s supposed to promote it. Depending on your point of view it might not be a disaster, but it remains an opportunity spurned.

(centre)
A dual-core processor means the X120 will cope well with a variety of tasks, including HD video playback. Only gaming and intensive video editing are out of the question.
(/centre)

(centre)
Unfortunately the X120 is let down by poor battery life, a serious faux-pas given it’s one of the most important factors in an ultra-mobile laptop.
(/centre)