Despite the fact that SATA has been with us for some time now, the IDE market is still pretty strong. There’s no shortage of IDE hard disks still available, and optical drives seem to be entrenched in the older standard. I was therefore quite surprised when Samsung asked me if I’d like to review the World’s first SATA DVD writer. I was surprised for two reasons – one, because Samsung had produced a SATA drive and two, because Plextor had produced one over a year ago.


So, the Plextor PX-712S aside, this is one of the only SATA DVD writers currently available. The SH-W163 is also quite a short drive, so it’s ideal for small form factor systems where space is a premium. Add to this the fact that SATA cables are far more compact and tidy than IDE ones, and this drive makes a good case for itself in Shuttle boxes and the like. 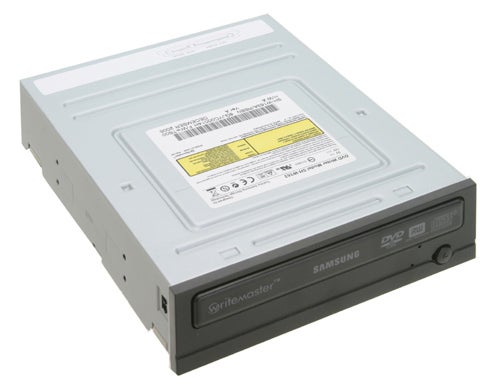 But there are more advantages to a SATA DVD writer than tidier cables. For a start, there’s no slave and master issues to worry about – I’ve lost count of the amount of times I’ve installed a second optical drive and forgotten to switch one of them to slave. Finally, a SATA DVD writer is another step towards the legacy free PC, which can’t be a bad thing.


Putting the SATA connection to one side, the specifications of the SH-W163 are pretty much par for the course. The drive will burn DVD+R and DVD-R at 16x, DVD+RW at 8x, DVD-RW at 6x, DVD+R DL at 8x, DVD-R DL at 4x, CD-R at 48x and CD-RW at 32x. Conspicuous by its absence is DVD-RAM support, since more and more drives are going down the Super-Multi route these days. That said, DVD-RAM is pretty much a niche market these days, mostly used be people who always have used it, like myself.


When it comes to performance, the Samsung puts in a pretty good show, but it still can’t live with the NEC ND-4551A, which also supports DVD-RAM and can burn LabelFlash discs. However, the Samsung did manage to beat the NEC in a few of the tests, like the 7.9GB burn to DVD+R DL media, although the NEC pulled back when burning 8.1GB of digital images to the same type of disc. The Samsung didn’t perform anywhere near as well with DVD-R DL discs where it lagged behind both the NEC and the Asus DRW-1608P2S. DVD-RW times were reasonable, but again no match for the NEC, while DVD+RW results were similarly middle of the road. The SH-W163 did prove to be one of the fastest drives I’ve seen when it comes to CD-R media though.

The front fascia of the drive is finished in matt black, as is the tray. There’s a single, round eject button, complemented only by an indicator light and a manual eject hole. Samsung supplied me with a full retail box which includes a Nero software bundle – Nero Express 6, InCD 4, Nero Vision Express, Nero BackItUp, Nero Showtime and Nero Recode. It was also good to see both a SATA cable and a Molex to SATA power converter in the box.


Samsung lists a number of advantages to its WriteMaster technology, one of which is “Minimal use of environmentally harmful materials”, although how green that actually is depends entirely on Samsung’s definition of “minimal”. That said, Samsung does guarantee that the SH-W163 has been constructed with lead-free solder, which is a step in the right direction. Another plus point in WriteMaster’s favour is the Firmware Live Update. This means that the drive will automatically update its firmware if Samsung releases a new version – obviously you’ll need to be connected to the Internet for this feature to work, but the chances are that any PC that this drive goes into will have Internet access.

It definitely appears that DVD writers have become commodity items over the past couple of years, and I wonder sometimes how manufacturers manage to make any money selling them anymore. With this in mind, it comes as no surprise that the Samsung WriteMaster SH-W163 is very reasonably priced, despite the SATA compatibility. However, I wasn’t able to find the retail version of this drive available for sale and the only price I could find was for the bare drive. At £29.99 including VAT for the drive alone, the SH-W163 is still good value, but you’ll have to factor in a SATA cable if you don’t have one, and a Molex to SATA power converter. If however you have a spare SATA cable and a power supply with native SATA power plugs, then the bare drive will look very attractive.


Samsung should be applauded for breaking into the SATA optical drive market; something that I wish all the other manufacturers would do. The SATA standard allows for tidier system internals, especially if you’re building a small form factor machine. The SH-W163 may be missing some of the features offered by other IDE drives, but if you want leave the older I/O standard behind for good, this drive is definitely worth a look.