So that’s the key features dealt with, but it’s time for the good stuff: picture quality.

First, though, it’s worth first dwelling for
a moment on the huge amount of tools Samsung puts at your disposal for
optimising the set’s pictures. These include a full colour
management/white balance suite, extensive gamma controls, and all manner
of processing adjustments and tools including contrast, sharpness and
colour boosters.

Not all of the processing systems are helpful, especially on their highest ‘power’ levels. But the processing power of the 55F7000 is sufficient that you many of the provided options are at least worth experimenting with on different source types. 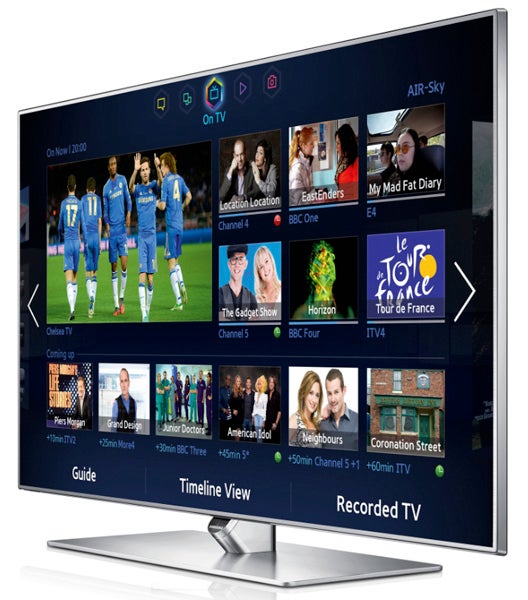 As usual with Samsung LCD TVs, the first thing that hits you when you switch the 55F7000 on is the extreme brightness and vibrancy of its images. But as you come to realise, this aggressive, punchy approach is only part of what makes the 55F7000 tick. That’s because the really clever part is that Samsung is able to bring on the bright stuff while simultaneously delivering one of the 2013 LCD TV world’s more impressive black level responses.

Take the time to calibrate the image – making sure, in particular, that you set the backlight as low as its eight setting when watching a film in a darkened room – and you get rich, deep blacks only marginally infiltrated by greyness. Keep the backlight down to a sensible level – probably no higher than 12 or 13, even during daytime viewing – and the set also generally avoids the backlight clouding issues that were once a flaw in Samsung’s TV make up.

Having said that, we did spot slightly more gentle clouding in the 55F7000’s corners than we did in the screen of the smaller UE46F7000. But such moments are still rare – especially if you make sure you’ve got Samsung’s new Cinema Black feature activated.

This treats the edge LED lights that impact the areas of black bars above and below 2.35/2.4:1-ratio films separately to the rest of the image, so that they can adopt a consistent black tone rather than distractingly changing their brightness levels along with the rest of the image. 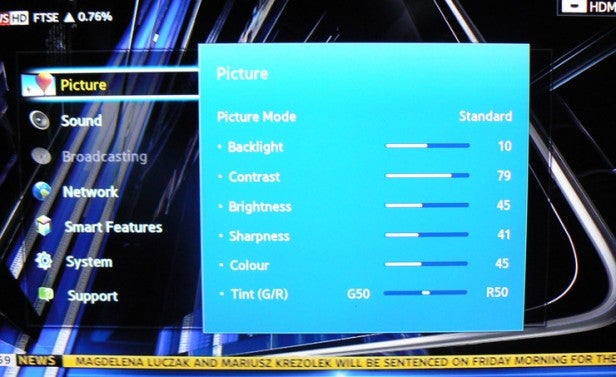 One other point to mention here is that you’re generally best turning off the UE55F7000’s dynamic contrast feature if you’re watching a film with lots of dark content in it, as even on its low setting the extent to which this can fluctuate the image’s overall brightness level can be rather distracting.

Also extremely commendable about the UE55F7000’s pictures is their colour response. Tones look a little cold using the Standard setting, but Warm 1 improves things greatly, and as noted earlier all the tools are provided for calibrating colours to more or less perfection.

As is customary with Samsung sets, moreover, the sense of sharpness and detail with HD material is unusually intense. Indeed, we’d recommend that you actually tone down the set’s sharpness setting a little from its default position – to around its 40 level or even a bit lower – if you don’t want images to look too noisy at times. This taste for sharpness from Samsung has got us salivating at the prospect of what the brand might be able to do with its new 4K/Ultra High Definition TVs.

As noted in passing earlier, a little more clarity gets lost with moving
objects than you see with the F8000 models, and strangely we didn’t
feel quite as happy with the ‘Clear’ setting for the Motion Plus
processing system as we did on the F8000s, leaving us preferring to
either turn the motion processing off completely or else use it on
Standard, which fortunately generates less unwanted side effects than
we’d expected.

As
you’ve probably worked out already, the UE55F7000 does need a little
TLC to get the best from it; we wouldn’t recommend sticking with any of
its predetermined picture presets, at least if you’re a movie fan. But
the picture quality rewards justify your calibration efforts.

The
UE557000 continues to impress with its standard definition upscaling,
adding a palpable sense of extra detail while also, crucially, reining
in source noise – even if, as we’d recommend, you keep the two noise
reduction circuits listed in the menus turned off.

Used as the main TV for the review period
Tested for more than a week
Tested using industry calibrated tools, discs and with real world use
Tested with broadcast content (HD/SD), video streams and demo discs
Previous
Samsung UE55F7000 Review Next
Conclusions Review