The F6500 series sits squarely in the middle of Samsung’s current TV range, and as the UE55F6500’s name suggests it’s the proud owner of a 55-inch screen. Throw in a full implementation of Samsung’s latest Smart TV engine, complete with the TV world’s most sophisticated recommendations system, and the UE55F6500 looks like potentially handy value at a smidge over £1,000, but does it have the quality to join the ranks of the best TVs around? 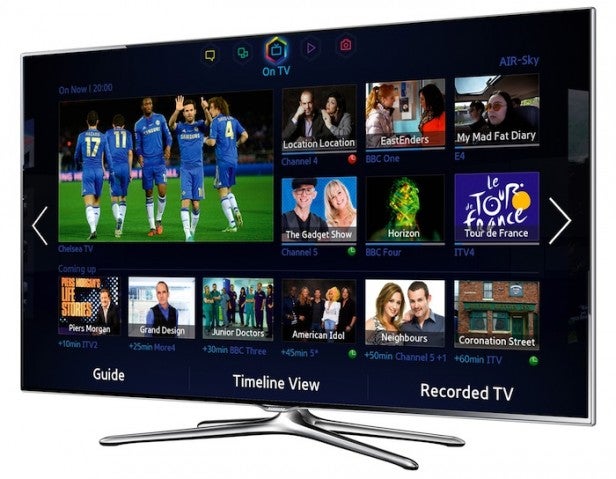 The UE55F6500 isn’t the prettiest TV in Samsung’s arsenal by any means, but it’s still an effective design for today’s market for the simple reason that it surrounds the screen with startlingly little frame – a design lure that still seems irresistible to many TV punters. The glinting silver cross-shaped stand is reasonably attractive too, and feels passably robust considering it’s having to support a 55-inch TV on a single connection neck just a couple of inches across.

The set is well-connected, with highlights of four HDMIs, three USBs and the increasingly obligatory LAN and integrated Wi-Fi options. Some of the jacks — including the LAN and optical digital audio output — face straight out of the TV’s rear, which could prove irritating for people wanting to wall-hang the set. But overall connections are solid enough for a reasonably priced 55-inch TV.

As with all but the very cheapest Samsung TVs, the UE55F6500 is equipped with an active 3D playback system, for which two pairs of active shutter glasses are included free.

These aren’t the only handy accessories Samsung includes as standard either. There’s also an IR extender cable so the TV can control your set-top box, and a second remote control that does away with many of the buttons on the main remote to make room for a large track pad you can use to navigate the onscreen menus and the built-in Web browser. 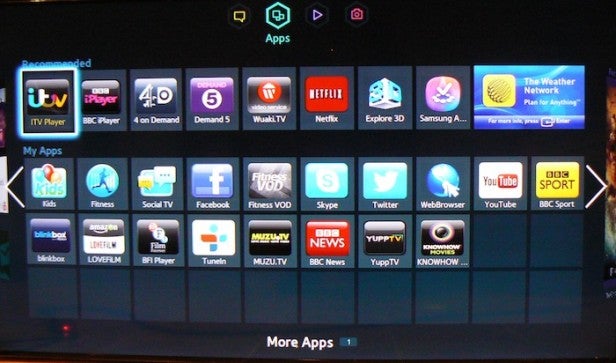 You can also use a tablet computer or smartphone’s touchscreen interface to control the TV, and Samsung’s multi-hub Smart interface is both attractive and useful – if a bit confusing until you’ve got used to what’s what.

Samsung’s smart content levels are extremely high, and include, currently uniquely, the free catch-up TV services of all the UK’s main terrestrial TV platforms: the BBC iPlayer, the ITV Player, 4OD and Demand 5. Plus most of the subscription/PPV-based big hitters like LoveFilm, NetFlix, BlinkBox, KnowHow Movies, and the new Wuaki.TV, YuppTV and BFI Player services. The most conspicuous absentee – especially as arch-rival LG does have it – is Sky’s NowTV platform.

For an in-depth look at Samsung’s smart offering and interface – including its gesture and voice control elements – check out our separate Samsung Smart TV review.

The UE55F6500’s screen is a VA (rather than IPS) type, driven by a 400 ‘CMR’ motion processing engine that combines a native 100Hz panel and backlight blinking. This 400CMR figure is way lower than the CMR figures quoted for Samsung’s flagship TVs – TVs which, significantly, use native 200Hz panels. Still, motion hasn’t tended to be a major problem for Samsung TVs of late, at least with 2D content, so hopefully the 400CMR system will prove adequate. 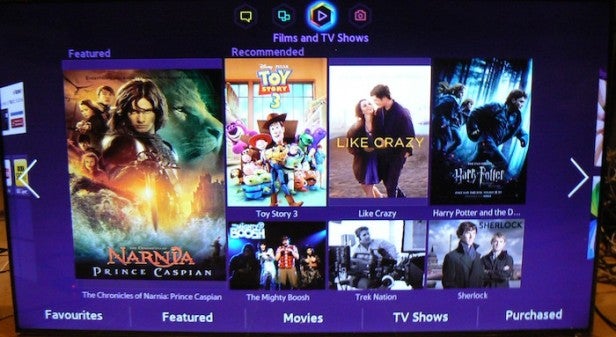 Although Samsung doesn’t pursue the official endorsement of the Imaging Science Foundation image calibration group, that’s not to say the Samsung UE55F6500 isn’t well-equipped with set up tools. These include a colour management system, gamma settings, white balance refinement and all manner of processing tools for tackling noise, and ‘enhancing’ contrast, colour and sharpness.

We put ‘enhancing’ in inverted commas because not all the available processing tools actually prove helpful – especially on their higher settings. Certainly with the UE55F6500 we’d avoid its noise reduction routines when watching HD sources, and while its motion processing tools work quite well with 50Hz standard def content, we’d still avoid them for 24p 2D Blu-ray playback and most other HD broadcast playback.

Making the UE55F6500 a bit harder to initially set up than most is the fact that the four picture presets Samsung provides aren’t especially helpful. They all push brightness and/or contrast too high, resulting in some backlight uniformity issues, over-aggressive colours and noise. However, just cranking down the set’s backlight (to as low as its 6 or 7 level for reasonably dark room conditions) and contrast settings instantly dramatically improves things, while making sure you only use the dynamic contrast setting on its lowest power level keeps the image looking stable.